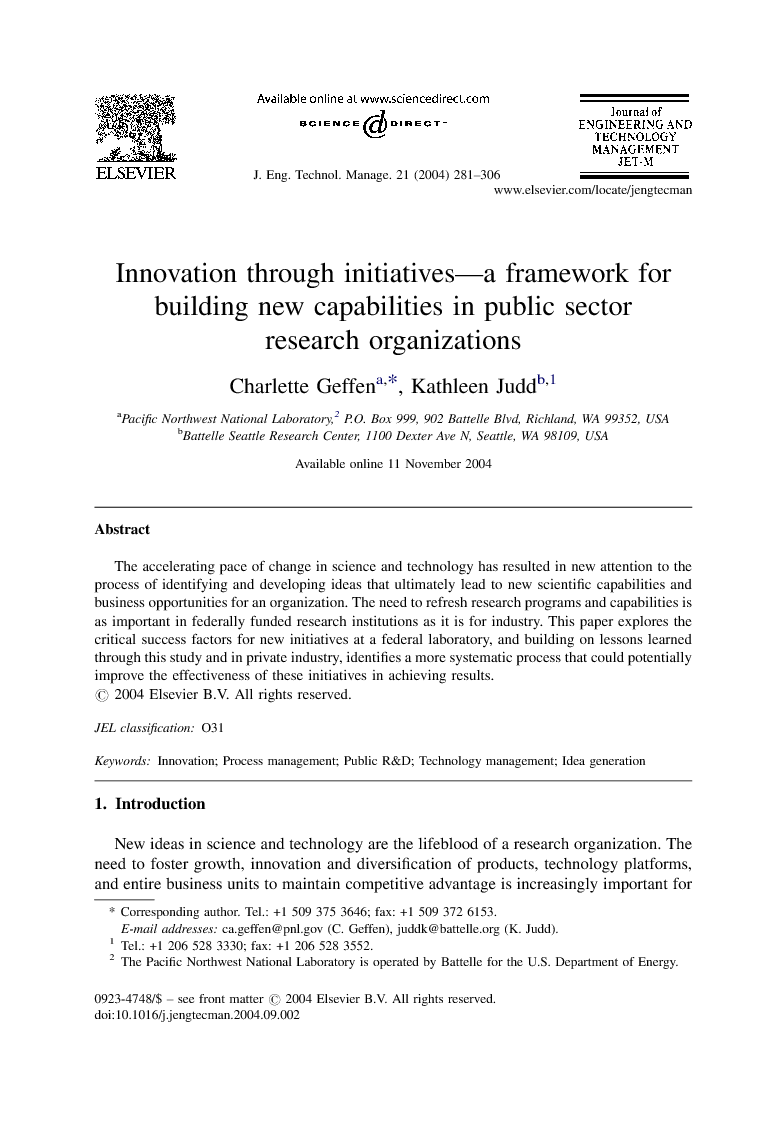 The accelerating pace of change in science and technology has resulted in new attention to the process of identifying and developing ideas that ultimately lead to new scientific capabilities and business opportunities for an organization. The need to refresh research programs and capabilities is as important in federally funded research institutions as it is for industry. This paper explores the critical success factors for new initiatives at a federal laboratory, and building on lessons learned through this study and in private industry, identifies a more systematic process that could potentially improve the effectiveness of these initiatives in achieving results.

New ideas in science and technology are the lifeblood of a research organization. The need to foster growth, innovation and diversification of products, technology platforms, and entire business units to maintain competitive advantage is increasingly important for companies. It is equally important for publicly funded research institutions, with a responsibility to advance fundamental scientific discovery and to find ways to utilize those discoveries to address major national challenges. The accelerating pace of change in science and technology today and the emergence of breakthroughs at the interface of various disciplines have resulted in new attention to the process of identifying and developing ideas that ultimately lead to new scientific capabilities and business opportunities for an organization. Much of the current research in technology innovation is focused on the efficiency of moving ideas from research to the commercial marketplace. Conceptualizing new products or technology platforms and linking them to potential markets are important aspects of successful innovation. An equally important element, however, and one that is not well understood, is how companies identify and foster the development of new focus areas for scientific research or technology development. This early stage of idea generation, before a product concept has evolved, has been called the “fuzzy front end” of innovation.1 Successful organizations are always generating new ideas—getting those ideas translated into program concepts that can be supported and funded by management, however, remains a challenge. The art of idea generation and development requires a supportive environment and a culture of discovery and innovation. Companies such as 3M are well known for their approach to encouraging research staff to explore new ideas. National laboratories in the U.S. also have a strong tradition of individual scientists developing new ideas for the next stage of their research or to explore a specific scientific question. Yet, the process of developing new organizational capabilities and major research programs that transcend individual interests remains a challenge. Understanding how best to evaluate and choose the directions for investment in new ideas, and then finding effective ways to accelerate the path to results is a challenge shared by public and private research organizations alike. 1.1. The importance of publicly funded science The federal government has traditionally had a strong role in the U.S. research enterprise, providing at times as much as 67% of the total R&D funding for the nation (National Science Board, 2000).2 As the nation's investment in R&D has grown over the last decades, however, industry has played an increasingly important role. According to the most recent publication from the National Science Board (2000), most of the R&D performed in the U.S. is currently paid for by private industry, which provided over 65% of the total R&D funding in 1998 (almost $150 billion). This support is provided during a time when the total level of R&D expenditures in the U.S. has been increasing since 1994 at a rate of almost 6% real growth per year. The role of industry in funding R&D is now greater than that of the U.S. government and is projected to remain so in the coming years. The federal government remains the major contributor to fundamental or basic research, however, with over 50% of the total national investment (National Science Board, 2000). Industry investments are primarily directed at the development of specific products and services to meet the needs of their existing and anticipated future markets. Their focus is principally on the “D” of R&D, taking basic science discoveries made in national laboratories and universities (although some companies still maintain a small, focused basic research enterprise) through the processes of development and commercialization. This major federal investment in basic science has been a significant factor in fueling many of the innovations and industries on which the growth of our economy in the last decades has been based (Crow and Bozeman, 1998). 1.2. Achieving results in a research environment Both public and private research organizations are facing new pressures for productivity and performance. After years of being somewhat protected from financial measures, research organizations now feel the same need as business units to ensure that major investments in new research programs or exploratory ideas achieve significant returns. The terms “return on investment” and “payback” have reached both public and private research organizations and are increasingly used in making decisions on new program funding. The Government Performance Results Act of 1993 initiated a process whereby all agencies, including those engaged in fundamental scientific research, are required to define specific performance measures and outcomes on which to be measured. Work is actively underway to develop appropriate measures for science and technology activities (Jaffe, 1999). Proactive management of the innovation process has demonstrated the ability to increase the effectiveness of the process for new product development, and improve the rate of successful product launch (Cooper and Kleinschmidt, 1986). Research organizations are now exploring new approaches to help them maximize the returns from investments in exploratory ideas at earlier stages of the idea generation and development process and related product development cycles. Understanding the process of translating early stage ideas into viable development concepts and the factors important to ultimate success is the focus of this paper. Investments in major capabilities or program development that can significantly affect future directions of a research laboratory, but that are not yet fully formulated as specific product offerings or program concepts, are termed “initiatives” for the purpose of this analysis. Initiatives provide an important avenue for exploring innovative ideas that can strengthen a laboratory's scientific and technical capabilities and/or lead to new business opportunities. These internal investments provide support for new ideas and concepts that have scientific or technical merit, but may be ahead of the market, in terms of their ability to garner programmatic funding or external investment. This paper specifically explores the approaches used to develop initiatives within a federally funded research organization, and evaluates the critical factors for success. The results of this preliminary analysis lead to a recommended framework for use with future initiatives to improve the effectiveness of the process.