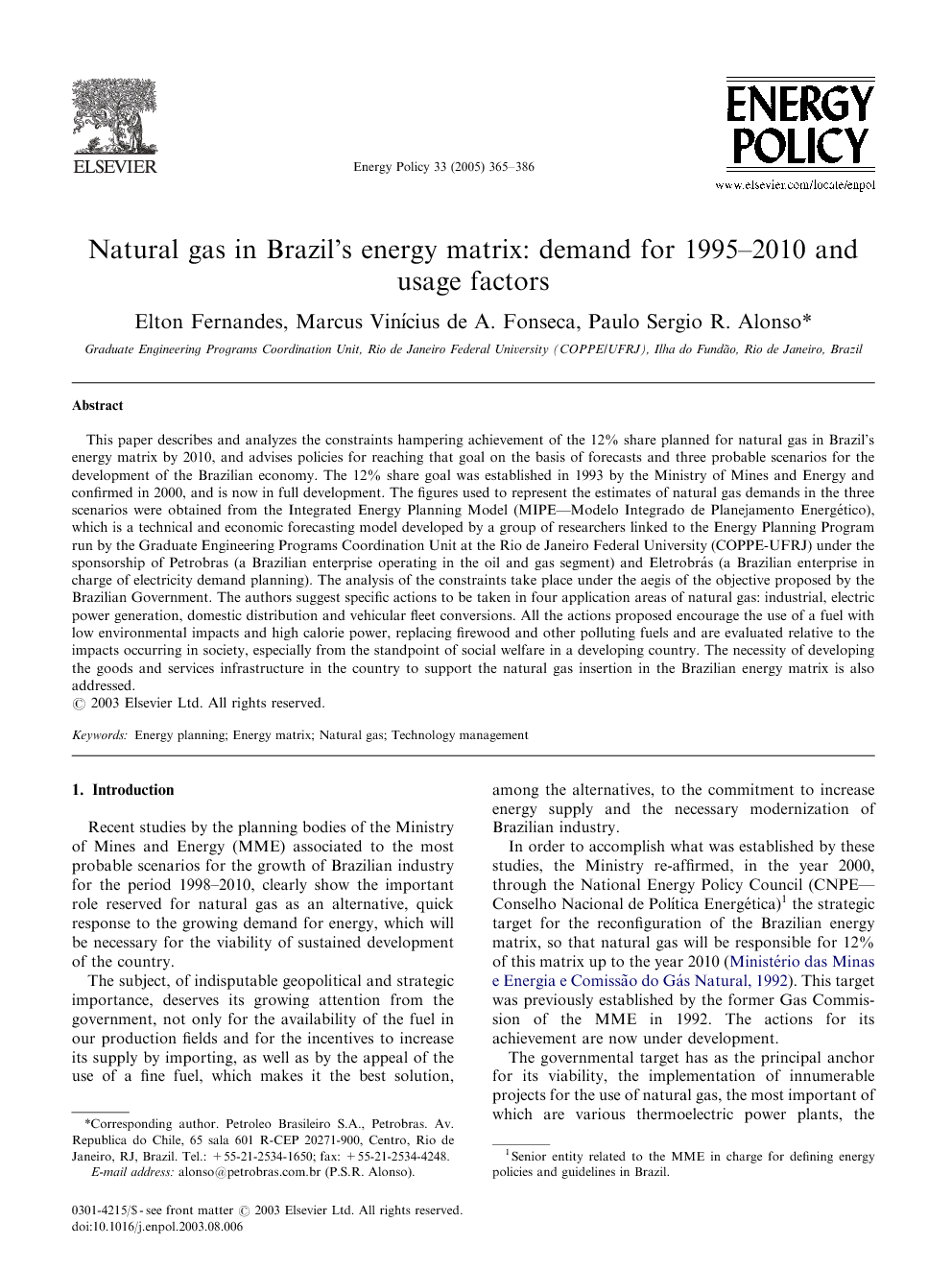 This paper describes and analyzes the constraints hampering achievement of the 12% share planned for natural gas in Brazil's energy matrix by 2010, and advises policies for reaching that goal on the basis of forecasts and three probable scenarios for the development of the Brazilian economy. The 12% share goal was established in 1993 by the Ministry of Mines and Energy and confirmed in 2000, and is now in full development. The figures used to represent the estimates of natural gas demands in the three scenarios were obtained from the Integrated Energy Planning Model (MIPE—Modelo Integrado de Planejamento Energético), which is a technical and economic forecasting model developed by a group of researchers linked to the Energy Planning Program run by the Graduate Engineering Programs Coordination Unit at the Rio de Janeiro Federal University (COPPE-UFRJ) under the sponsorship of Petrobras (a Brazilian enterprise operating in the oil and gas segment) and Eletrobrás (a Brazilian enterprise in charge of electricity demand planning). The analysis of the constraints take place under the aegis of the objective proposed by the Brazilian Government. The authors suggest specific actions to be taken in four application areas of natural gas: industrial, electric power generation, domestic distribution and vehicular fleet conversions. All the actions proposed encourage the use of a fuel with low environmental impacts and high calorie power, replacing firewood and other polluting fuels and are evaluated relative to the impacts occurring in society, especially from the standpoint of social welfare in a developing country. The necessity of developing the goods and services infrastructure in the country to support the natural gas insertion in the Brazilian energy matrix is also addressed.

Recent studies by the planning bodies of the Ministry of Mines and Energy (MME) associated to the most probable scenarios for the growth of Brazilian industry for the period 1998–2010, clearly show the important role reserved for natural gas as an alternative, quick response to the growing demand for energy, which will be necessary for the viability of sustained development of the country. The subject, of indisputable geopolitical and strategic importance, deserves its growing attention from the government, not only for the availability of the fuel in our production fields and for the incentives to increase its supply by importing, as well as by the appeal of the use of a fine fuel, which makes it the best solution, among the alternatives, to the commitment to increase energy supply and the necessary modernization of Brazilian industry. In order to accomplish what was established by these studies, the Ministry re-affirmed, in the year 2000, through the National Energy Policy Council (CNPE—Conselho Nacional de Polı́tica Energética)1 the strategic target for the reconfiguration of the Brazilian energy matrix, so that natural gas will be responsible for 12% of this matrix up to the year 2010 (Ministério das Minas e Energia e Comissão do Gás Natural, 1992). This target was previously established by the former Gas Commission of the MME in 1992. The actions for its achievement are now under development. The governmental target has as the principal anchor for its viability, the implementation of innumerable projects for the use of natural gas, the most important of which are various thermoelectric power plants, the introduction of natural gas as an industrial fuel, the expansion of the domestic supply networks and the use of natural gas to power vehicles. Taking into account that Brazil is a tropical country, applications in the commercial sector for the generation of air-conditioning from natural gas are also under consideration. The principal reasons for the introduction of natural gas in the energy matrix are related to the exceptional supply of natural gas available in Brazil's neighboring countries such as Bolivia and Argentina (Rosa et al., 1995), from which the use of this supply was made possible by the completion of the 3150 km Bolivia–Brazil gas pipeline in the year 2000 (Passos, 1999).2 The Brazilian own reserves now sums up to 7324.9 billions of cubic feet (Petrobras, 2003) most of which are associated gas located in deep waters at the sea. In order to take advantage of the Argentinean gas, the construction of various gas pipelines are being planned which would permit the implementation of an even more ambitious program known as the Mercosur Energy Integration (see Fig. 1) (Mercosur—Southern Cone Common Market). On the other hand, there is the construction of thermoelectric power plants as an alternative to the heavy investments required for the construction of hydroelectric power plants, which being far from the large urban centers in a country the size of Brazil, implies the construction of costly transmission systems which today is the principal limiting factor in the performance of the Brazilian electrical system. Growing international pressure related to the solution of environmental questions, also favor the introduction of natural gas in the industrial sector as a substitute for fuels such as firewood, still much used in the northern and northeastern regions of Brazil (Santos et al., 2002). This work has as its objective to analyze the constraints and the technical viability for reaching the strategic target proposed by the Federal Government, based on projections for consumption in three economic development scenarios for the period 1995–2010. These consumption projections were obtained from the results of an energy planning model known as MIPE—Modelo Integrado de Planejamento Energético (Tolmasquim et al., 1998b) developed by a team of researchers from the Energy Planning Program run by the Graduate Engineering Programs Coordination Unit at Rio de Janeiro Federal University (COPPE-UFRJ).3 The principal existing constraints for the introduction of natural gas in four consumption sectors—energy generation, industrial, residential and automotive—are analyzed and measures are suggested by the authors to facilitate the attainment of the government's target. These segments are considered today as the main ones for concentrating strategies with the objective of the insertion of natural gas into the Brazilian energy matrix. The feasibility of the measures suggested is analyzed under the political, economical and social aspects as well as is emphasized the necessity of concrete actions to foster technological expertise and the growth of the goods and services industries in the country as to support the introduction of natural gas in those segments.