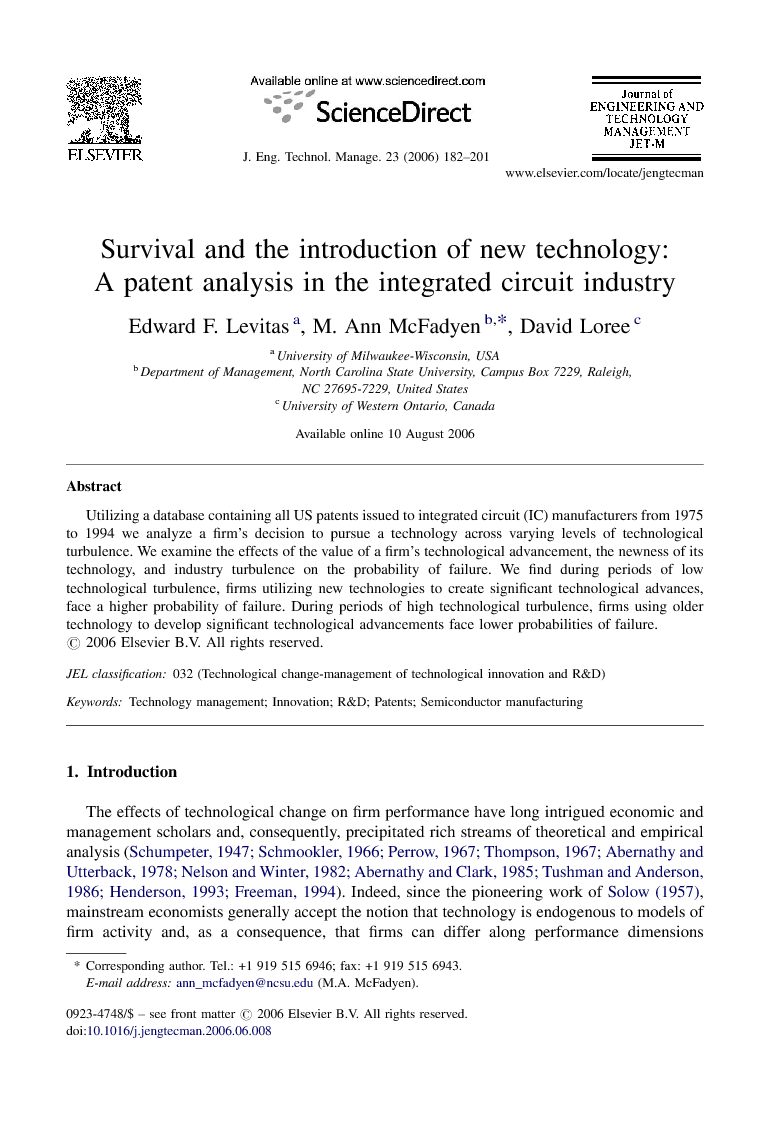 The effects of technological change on firm performance have long intrigued economic and management scholars and, consequently, precipitated rich streams of theoretical and empirical analysis (Schumpeter, 1947, Schmookler, 1966, Perrow, 1967, Thompson, 1967, Abernathy and Utterback, 1978, Nelson and Winter, 1982, Abernathy and Clark, 1985, Tushman and Anderson, 1986, Henderson, 1993 and Freeman, 1994). Indeed, since the pioneering work of Solow (1957), mainstream economists generally accept the notion that technology is endogenous to models of firm activity and, as a consequence, that firms can differ along performance dimensions (Rosenberg, 1982 and Scherer and Ross, 1990). More “fringe” economic theory suggests firms that are first to discover and exploit new technologies can accrue performance awards that exceed competitive market levels (Penrose, 1959, Kirzner, 1979, Dosi, 1982 and Dosi, 1988). Still other economic research has sought explanations as to why firms may successfully utilize and market sub-optimal technologies even though buyers are provided with technologically superior choices (David, 1985; Arthur, 1988). Management research has responded by suggesting that economic factors are but one of a multitude of factors that determine the trajectory of technological change with respect to the firm. Societal needs, government regulation (Scherer and Ross, 1990), constituent (e.g. suppliers, buyers) demands (Tushman and Rosenkopf, 1992, Henderson, 1993, Christensen and Bower, 1996 and Tripsas, 1997) as well as firm idiosyncrasies (Nelson and Winter, 1982, Levitt and March, 1988, Kogut and Zander, 1992, Leonard-Barton, 1992, Kogut and Zander, 1996 and Teece et al., 1997) are thought to play an equally if not more important role in a firm's ability to successfully develop and adopt new technology. To be sure, the results of management research in this area suggest that economic value, a central focus in more traditional economic models (e.g. Scherer and Ross, 1990) may assume a secondary role to these other considerations (Tushman and Rosenkopf, 1992). These rich and varied research streams have progressed our understanding of a firm's use of technology beyond Rosenberg (1982) amorphous “black box” and have informed us of the intricacies of firm behavior. However, this situation has also presented scholars with a host of new issues that remain to be reconciled. For instance, when can managers base their decisions to pursue/use a technology on that technology's estimated future technological value? In instances where managers cannot base their decisions on this value yardstick, on what can they base their decision? Furthermore, researchers have suggested that over the long term, firms that repeatedly introduce valuable technological advances to the industry tend to outperform their less innovative counterparts (Penrose, 1959, Kogut and Zander, 1992, Henderson and Cockburn, 1994, Bierly and Chakrabarti, 1996, Kogut and Zander, 1996, Teece et al., 1997 and Cockburn and Henderson, 1998). In the shorter term, however, when is it advisable for firms to withhold innovations so as not to challenge the status quo? Conversely, when are challenges to the status quo necessary for survival? In short, research to date has not adequately uncovered the environmental conditions under which firm can “safely” pursue the development of valuable technologies without concern for other factors, and when these same firms should delay or postpone such efforts. We try to enhance research in this area by examining how exogenous environmental forces and endogenous firm decisions simultaneously effect innovative firms’ survival. By utilizing a database that contains all US patents issued to integrated circuit merchant manufacturers between 1975 and 1994, we attempt to shed light on these questions. Specifically, we analyze a firm's decision to pursue a technology across varying levels of technological turbulence. Turbulence in this paper is defined as the rate at which new knowledge is being introduced into the market and is a gauge of the external environment's willingness to accept technological change. A high rate of change in turbulence, for example, suggests fertile ground for newly introduced ideas as well as inventors’ willingness to test ideas, and thus an increasing likelihood that old industry routines will be challenged. A low rate of change in turbulence suggests a less accepting environment. We examine the effects of valuable technology development by the firm, the newness of its technology, and the effects of industry turbulence on the probability of firm failure. Our findings indicate that the impact of the newness of technology on the probability of firm survival depends on the level of turbulence within the industry and the value of the innovations.

5.1. Discussion of findings This study examines the impact that the use of new technology in creating innovations, the value of the innovation and the number of innovations being into an industry have on the probability of exit. The integrated circuits industry was used as the context for this study because of its highly turbulent environment. The hypotheses in the study were supported with the exception of one. The use of new technology in creating innovations did not significantly impact the probability of exit alone. However, newness impacted the probability of exit when we took into account the level of turbulence and the value of the innovations. Overall we found that when the number of innovations introduced into an industry is low, the highest probability of exit occurs when firms introduce new and valuable technology. This suggests that the industry is potentially not ready to accept new technology, regardless of the value of the innovation. Moreover, the creation of such technologies challenges the industry status quo/dominant design and may actually run counter to the desires of powerful stakeholders (i.e., buyers, suppliers, producers). Indeed, such stakeholders may have the incentive to actually insure the failure of such technologies. However, when the number of innovations introduced in an industry is high, we found that the probability of exit decreased when firms created valuable innovations. In addition, during periods of high technological turbulence, firms that use relatively old technology to develop inventions that significantly advance technology face also experienced decreased probabilities of failure. Firms that did not create innovations had the highest probability of exit. Importantly, our findings provide further evidence of the complexity of introducing new technology. The actions of other firms as well as the technology itself (newness and value) impact chances of survival. Firms, which have the capability of introducing new valuable technology, may increase their survival chances by knowing when to draw upon the latest advancements in their development efforts. All else constant, firms might find it wise to defer the introduction of important technologies and technologies based on novel concepts until conditions of high turbulence arise. In such contexts, stakeholders (e.g., suppliers, buyers) may be more accepting of such technologies. Equally crucial is the idea that such stakeholders may be willing to discard older technologies or practices. Deferral, of course, is not without tradeoffs. Deferring firms run the risk of competitors developing and commercializing substitute technologies. Furthermore, delay in commercialization sacrifices cash inflows from sales. Our results also provide some guidance for a firm's use of new technologies. We found no support for the possibility that a firm's use of new technology would decrease its probability of exit. Furthermore, in certain contexts, we find that the firm's use of new technology increases the probability of exit. In retrospect, these findings are not surprising as new technology use subjects a firm to greater uncertainty. Newer technologies will not possess the same level of experimentation, prodding and examination that characterizes older and more tested technologies. Their use therefore may provide a firm with considerable profit opportunities (e.g., Narin, 1993) but simultaneously subjects a firm to greater risk of failure. 5.2. Research limitations Construct validity is one of the limitations to this study. One of the contributions of this study is that it attempts to use relatively new measures to assess the newness of the technology that a firm uses to create innovations and the amount of turbulence occurring within an industry. This study uses objective patent measures to proxy both constructs. Given the importance of innovations in the high technology industry, other elements may be studied to determine if better measures are available. The generalizability of this study may be limited due to the unique nature of the patent data in the integrated circuits industry. In other industries, not all significant technological advancements are patented. Scientific papers and other research may be important variables in addition to patent data when examining other industries. While patent data may prove to be useful information in other industries, patent data must be used with caution as not all industries place the same amount of importance and value on obtaining patents.