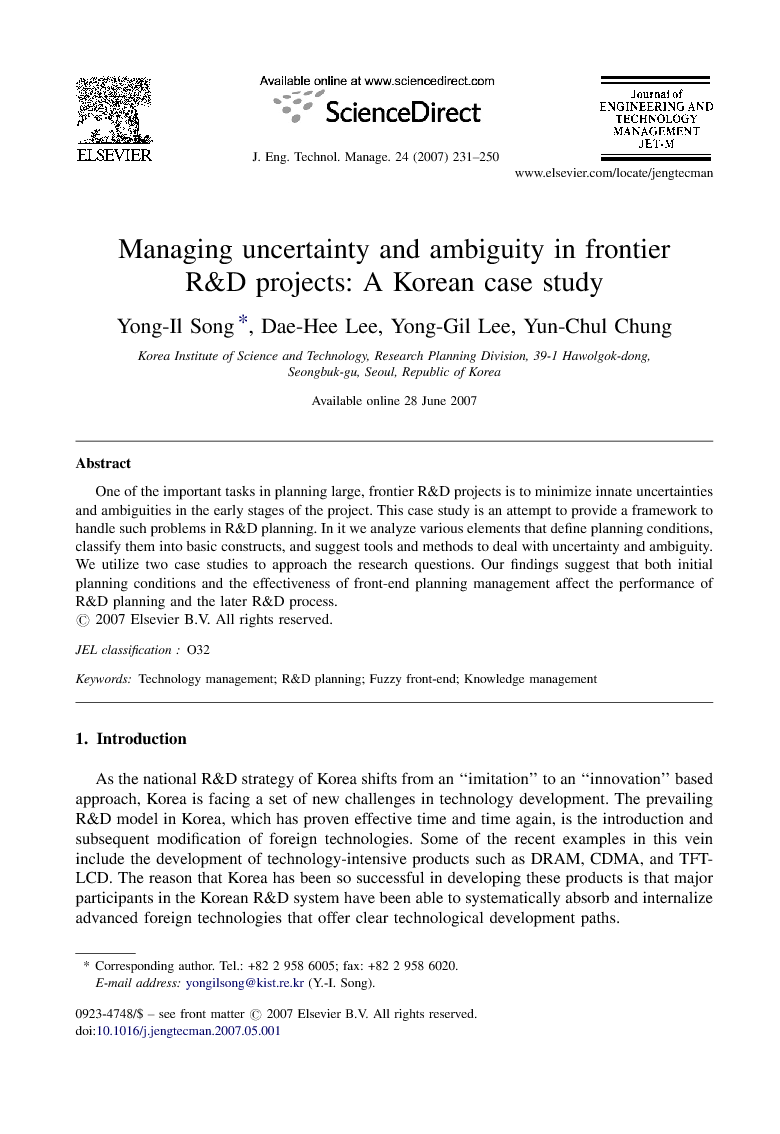 One of the important tasks in planning large, frontier R&D projects is to minimize innate uncertainties and ambiguities in the early stages of the project. This case study is an attempt to provide a framework to handle such problems in R&D planning. In it we analyze various elements that define planning conditions, classify them into basic constructs, and suggest tools and methods to deal with uncertainty and ambiguity. We utilize two case studies to approach the research questions. Our findings suggest that both initial planning conditions and the effectiveness of front-end planning management affect the performance of R&D planning and the later R&D process.

As the national R&D strategy of Korea shifts from an “imitation” to an “innovation” based approach, Korea is facing a set of new challenges in technology development. The prevailing R&D model in Korea, which has proven effective time and time again, is the introduction and subsequent modification of foreign technologies. Some of the recent examples in this vein include the development of technology-intensive products such as DRAM, CDMA, and TFT-LCD. The reason that Korea has been so successful in developing these products is that major participants in the Korean R&D system have been able to systematically absorb and internalize advanced foreign technologies that offer clear technological development paths. In the process of moving to a knowledge-based, technology-intensive model of economic expansion, special attention is now being paid to developing a relevant R&D model which the key players involved in Korea's national innovation system can utilize for successfully organizing and managing path-breaking, innovative R&D projects. One of the critical tasks in this process is to reduce the technological and market uncertainties and ambiguities which are inherent in such frontier R&D projects. When technologies and markets are ill defined and still in their emerging stages, the issue of how to handle such uncertainties, as well as the related development risks, becomes of critical importance. This is especially true in nations like Korea where technological know-how and creative knowledge stock have not accumulated sufficiently enough to compete with world technology leaders. Challenges also come from the current R&D environment in which the technological life cycle gets shorter, and technological breakthrough is more of an artistic fusion of various technologies over a period of cumulative research by a group of competent researchers. This case study is an attempt to deal with some of these issues. We focus particularly on the issues related to the uncertainty and ambiguity in planning large, cutting-edge technology development projects supported by the Korean government, and provide a framework to manage such issues. Researchers have used the term “fuzzy front-end” (FFE) to describe the uncertainties and ambiguities embedded in the front-end portion of planning activities, or pre-planning activities, of the product development process (Gupta et al., 1986, Bacon et al., 1994, Khurana and Rosenthal, 1997, Onno Omta and de Leeuw, 1997 and Khurana and Rosenthal, 1998). In this study we applied this concept to investigate how the embedded uncertainties and ambiguities in such R&D projects can be managed. In particular, we have chosen as case studies two large, forefront research projects, both of which were composed of many sub-projects with multiple project managers and participants from many Korean research institutes and universities. Both projects had a highly complex technological structure, encompassing various technological fields. Both were awarded similar funding of around US$ 10 million per annum over a 10-year period. This paper is organized as follows. We first document previous research in R&D planning, especially in front-end planning activities. Next, historical background is provided of government initiatives for such large, forefront technological projects in Korea, followed by case studies of the two selected projects. Then an in-depth analysis of the case studies is performed with a detailed discussion of the implications of this research. We conclude the paper by providing guidelines for dealing with front-end fuzziness in such large, highly experimental R&D projects.

In this case study, we looked at the structural, technological elements that comprised the planning stage of large-scale, forefront technology development projects supported by the Korean government. We provided a five-construct R&D planning model which can be used to deal with the inherent ambiguity and uncertainty in such research projects. Though the model has been derived from Korean R&D experiences, we believe that it is still applicable for any large, forefront technology R&D project. We argue that a comprehensive planning process is imperative for such R&D projects because the complexity of the project exposes any insufficient planning, and when ignored, always leads to much higher costs later in the actual development project. A network of participating researchers and experts with adequate knowledge backed by top management support, needs to be secured early on in order to minimize the vagaries of such research. We also found that due to the extensive networking that occurs in actual research, vision sharing and coordinated structural arrangements are essential, even during the planning process. Some elements such as political and government support also seem to be important in carrying out such large-scale projects that have high national visibility. Our findings suggest that in the era of international cooperation, adequate upfront planning of R&D activities must include ample planning time, a reasonable budget, qualified experts, and the identification of clear goals in order to optimize the investment and R&D activities at later stages of the project. As a further avenue of study, this model should be enriched and tested for its relevance and applicability to large-scale, forefront technology R&D projects in general.