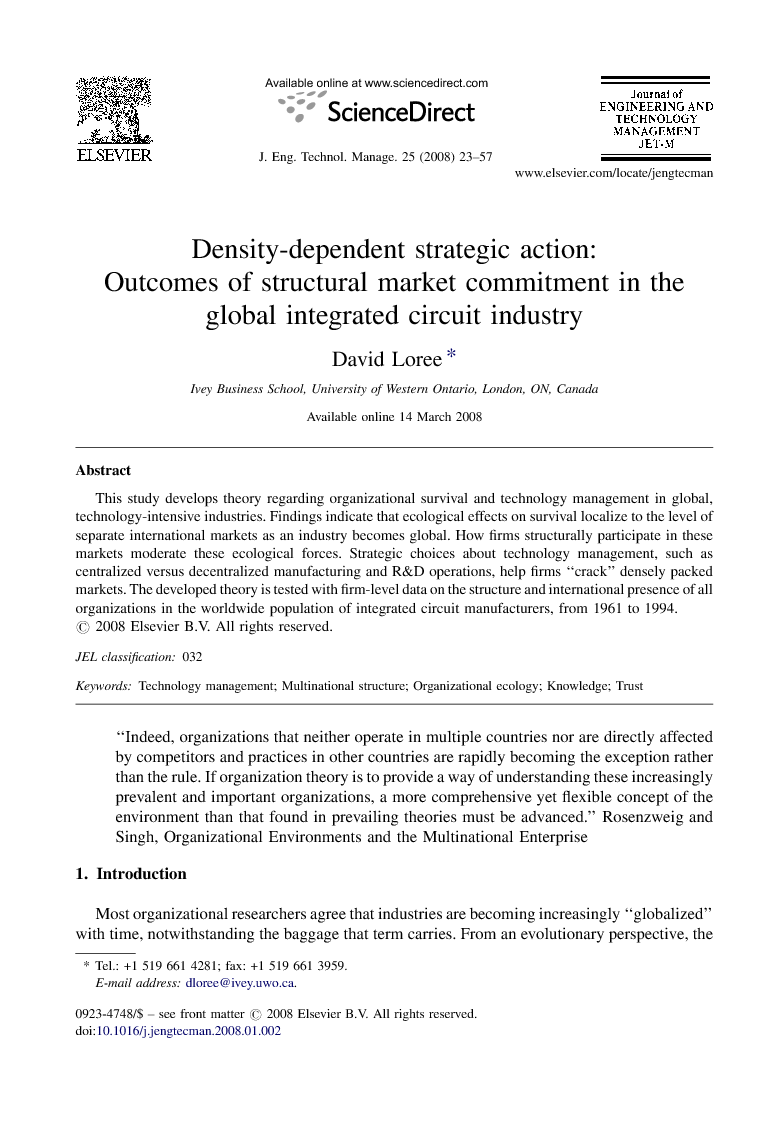 This study develops theory regarding organizational survival and technology management in global, technology-intensive industries. Findings indicate that ecological effects on survival localize to the level of separate international markets as an industry becomes global. How firms structurally participate in these markets moderate these ecological forces. Strategic choices about technology management, such as centralized versus decentralized manufacturing and R&D operations, help firms “crack” densely packed markets. The developed theory is tested with firm-level data on the structure and international presence of all organizations in the worldwide population of integrated circuit manufacturers, from 1961 to 1994.

Most organizational researchers agree that industries are becoming increasingly “globalized” with time, notwithstanding the baggage that term carries. From an evolutionary perspective, the process of globalization involves a segmenting of world markets, adding to the complexity and uncertainty of an organization's environment. Several researchers have recently illustrated the fundamental changes that have been occurring in international environments, as well as the strategies necessary to successfully participate in these markets (Barkema and Vermeulen, 1998, Vermeulen and Barkema, 2002, Kotabe et al., 2002 and Martin and Salomon, 2003). When a globalized industry is also high-tech, participating firms face additional strategic complexity. Firms have to decide whether to centralize manufacturing operations and R&D capabilities within their home market or decentralize these activities across the various international markets that comprise the industry. Much of the research in this area has focused on the coordination and integration issues associated with decentralizing operations across multiple international markets. Bartlett and Ghoshal's (1989) work on transnational organizations addressed technology management from the perspective of different forms of geographically dispersed organizations. They described how different organizational configurations (hub model, local innovation model, locally leveraged model, and globally linked model) require different methods for coordinating technology. Chiesa's (1996) work on technology structures identified the different configurations of research activities (isolated specialization, specialized contributors, and integration-based) and development activities (isolated specialization, supported specialization, and integrated labs) that can be used to facilitate a firm's technology management strategies. Several researchers have concentrated on the varying managerial styles needed to effectively manage technology in a global context (Chiesa, 1999, Brockhoff and Schmaul, 1996, Nobel and Birkinshaw, 1998, Asakawa, 1996 and Sakibara and Westney, 1992). This study focuses on a related, but distinct, issue associated with managing technology in a global industry. Specifically, I consider how the structures used to allocate technology across international markets influence a firm's survival chances by (i) influencing customer trust within these markets and (ii) facilitating the absorption of external knowledge from sources within the market. Many previous studies of effective technology management have used either single or small sample lenses; thus, they do not capture information about the competitive effects emerging from all the other organizations in the industry. In other words, it might be possible to develop a broader set of prescriptions regarding effective technology management by using a larger lens which acknowledges the competitive and institutional contexts in which a firm is embedded. The organizational ecology analytical framework includes information about all the other competing organizations in a firm's environment, but it does not focus sufficient attention on the strategic actions that firms use to manage their destinies within these environments. The issue becomes one of capitalizing on the big picture view embedded in the organizational ecology framework, while injecting it with firm-specific information that recognizes the different ways that organizations operate across complex environments. This study extends existing research on organizational ecology and technology management in several ways. First, by demonstrating that as an industry becomes increasingly global, the resulting separate market segments that develop around the world exhibit localized ecological forces that affect the survival chances of firms in the industry. A dynamic model of organizations is developed that straddles these multiple markets, incorporating both explicit and implicit information about their varying competitive and institutional environments. Second, by developing a model of organizational survival that acknowledges variation in how firms participate in the multiple markets that comprise their industry and the different structures used as part of their technology management strategies to influence their chances of survival. In short, organizations can influence their survival chances by cutting through population-level effects with different types of structures that are associated with varying degrees of commitment to the markets in which they exist. Third, the empirical setting for this study is the worldwide integrated circuit (IC) manufacturing industry. The model developed includes information about the structural configurations associated with the technology management strategies of all the firms within the industry, from its inception in the early 1960s until the mid 1990s. I use time series data to measure the changing relationship between global market participation and performance. This approach improves the generalizability of my empirical findings to the technology management decisions made by firms participating in other global technology-intensive industries (Geringer et al., 2000).

The findings of this study suggest that ecological forces localize to the level of regional markets as an industry globalizes, and that the dynamics of how firms participate in these markets are important to firm survival. When a globalized industry is also technology-intensive, strategic choices about managing technology complicate the question of how to participate in the various markets that comprise the industry. This study proposes that embedded in the question of how to participate in global markets are choices about the types of establishments to be used. Deliberately or unintentionally, these establishments express varying levels of structural commitment that facilitate perceptions of trustworthiness and access to external knowledge. The underlying theory developed in this paper about technology management, structural commitment, trust and knowledge access is culturally generic. However, these variables only affected a firm's survival chances in the Japanese segment of the worldwide IC manufacturing industry. A not surprising result, perhaps, given the different institutional contexts of these markets (Fombrun, 1988). Political scientists, economists, and organizational sociologists all view institutions as structures that reduce the uncertainty and transaction costs associated with evolving populations, increasing competition, and mushrooming product alternatives. Institutions might be the “rules of the business game in a society or, more formally, … the humanly devised constraints that shape interaction” (North, 1990). If so, the rules that apply in different markets around the world will affect the way in which organizational structures facilitate relationships and access to resources in these environments. Several examples from academic and popular literature illustrate striking differences in the business environments of the markets that comprise the IC industry. The general conclusion is that the role of relationships in business is more important in Japan, than in Europe or the US. Lohr provides an example of this in Granovetter's (1985) article on embeddedness, stating that “friendships and long-standing personal connections affect business connections everywhere. But that seems to be especially true in Japan…. Once these ties are set, they are not easily undone.” The Japanese business environment has been described as a system based on relationship rather than contracts, unlike the American environment (Ohmae, 1985). As such, it is reasonable that the theory developed in this paper was supported in the Japanese market. A report on US–Japan strategic alliances in the semiconductor industry reinforces this argument: “To compete effectively in foreign markets over the long haul, companies must establish their own physical presence abroad so that they can understand and respond to local needs. A physical presence makes it possible for companies to do what is necessary to succeed: communicate continually with local customers; learn how to operate in foreign environments; cultivate long-term relationships; develop, adapt, or custom-make products for foreign end-users; manufacture locally; and offer timely delivery and reliable after-service. Doing this from a distance is impossible.” (National Research Council, Office of Japan Affairs, 1992) These thoughts help us understand the importance of relationships over transactions in Japan. But the question remains: How do expressions of commitment help establish relationships between organizations in Japan? Several researchers suggest that most foreign organizations simply do not understand the importance and difficulty of sufficiently expressing commitment to Japanese buyers (Hodgson et al., 2000 and Morgan and Morgan, 1991). Meyer and Allen (1991) identify the three dimensions that must be understood to fully appreciate the role of commitment in a culture. In the social dimension, a firm's commitments are based on perceived positive experiences with partners over an indefinite time horizon. In the calculative dimension, a firm's commitments will be based on the economic benefits of remaining in relationships compared with the costs of dissolving those relationships. The normative dimension involves responsibilities based on duty and felt obligation to reciprocate with exchange partners. The work of Lohtia et al. (2005) helps us understand the important role of these three dimensions of commitment and their connection to exchange relations between buyers and sellers in Japan. First, Ningen kankei – the need to establish social bonds – is an important aspect of collectivistic Japanese culture. This group orientation leads Japanese customers to place a high priority on developing and maintaining relationships with their suppliers. Lohtia et al. also describe Japanese culture as “high-context,” meaning that communication is difficult without a social context that conveys information about the supplier's values, background, and position. Second, it is well understood that stable relationships play a more important role in Japan than they do in the West ( Woronoff, 2000). Japanese customers value the predictability of stable, long-term relations which are embedded in substantive operations, rather than simply doing business with a sales office that channels products manufactured and developed elsewhere. Third, reciprocity is a fundamental aspect of Japanese culture. A strong sense of mutual obligation ( Harris and Moran, 1996) means that customer procurement decisions will be heavily influenced by a potential supplier's willingness to recognize and fulfill their obligations ( Morgan and Morgan, 1991). The role of commitment in Japanese culture illustrates how the results of this study have implications for organizations that participate in global technology-intensive industries. The strategic choice between centralizing manufacturing operations and R&D capabilities at home versus decentralizing them across global market segments is not just about cost, opportunity, visibility, or survivability. Business leaders also have to consider non-economic factors, such as the social, political, and institutional contexts of the markets in which the firm participates.