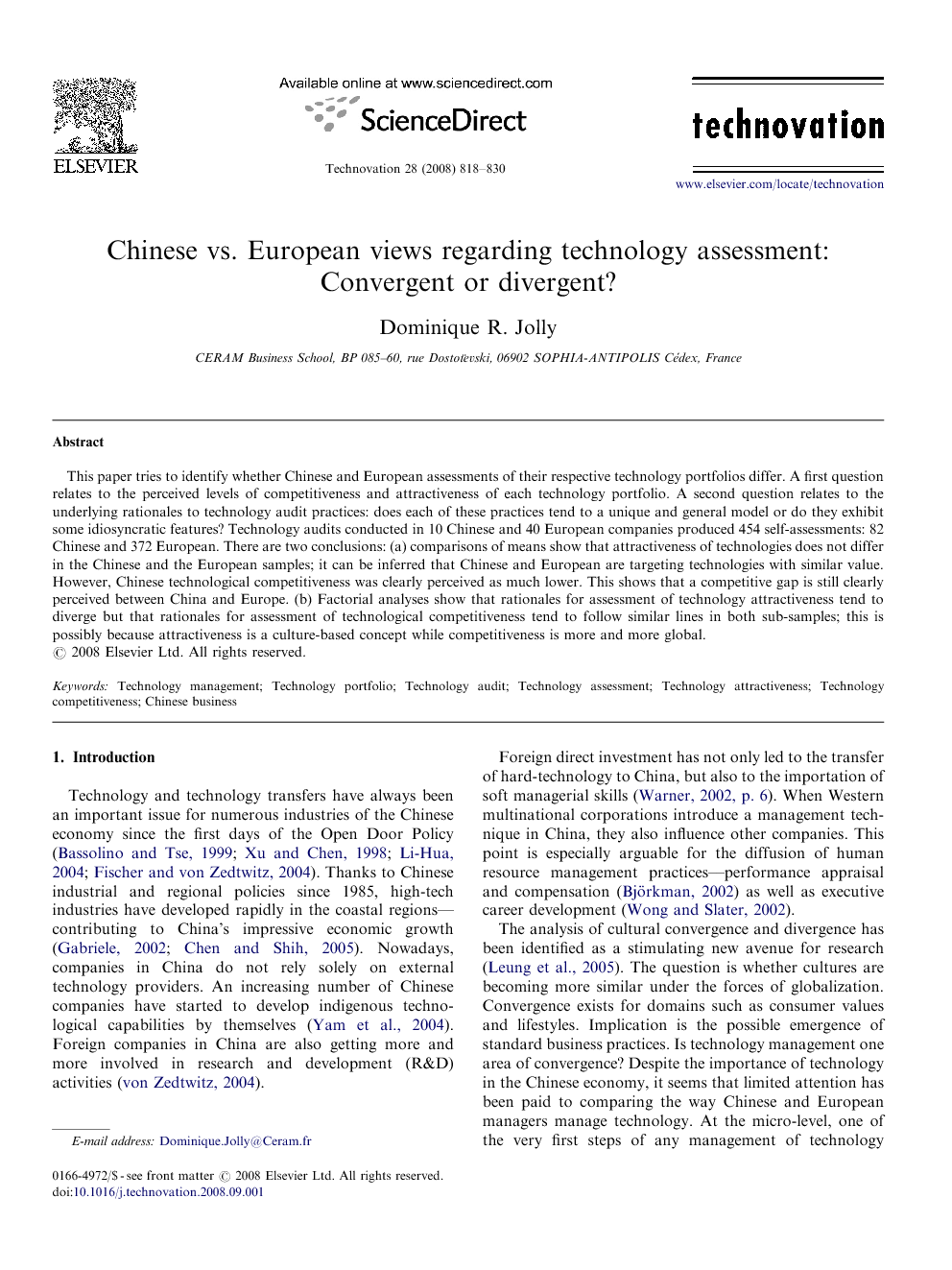 Technology and technology transfers have always been an important issue for numerous industries of the Chinese economy since the first days of the Open Door Policy (Bassolino and Tse, 1999; Xu and Chen, 1998; Li-Hua, 2004; Fischer and von Zedtwitz, 2004). Thanks to Chinese industrial and regional policies since 1985, high-tech industries have developed rapidly in the coastal regions—contributing to China's impressive economic growth (Gabriele, 2002; Chen and Shih, 2005). Nowadays, companies in China do not rely solely on external technology providers. An increasing number of Chinese companies have started to develop indigenous technological capabilities by themselves (Yam et al., 2004). Foreign companies in China are also getting more and more involved in research and development (R&D) activities (von Zedtwitz, 2004). Foreign direct investment has not only led to the transfer of hard-technology to China, but also to the importation of soft managerial skills (Warner, 2002, p. 6). When Western multinational corporations introduce a management technique in China, they also influence other companies. This point is especially arguable for the diffusion of human resource management practices––performance appraisal and compensation (Björkman, 2002) as well as executive career development (Wong and Slater, 2002). The analysis of cultural convergence and divergence has been identified as a stimulating new avenue for research (Leung et al., 2005). The question is whether cultures are becoming more similar under the forces of globalization. Convergence exists for domains such as consumer values and lifestyles. Implication is the possible emergence of standard business practices. Is technology management one area of convergence? Despite the importance of technology in the Chinese economy, it seems that limited attention has been paid to comparing the way Chinese and European managers manage technology. At the micro-level, one of the very first steps of any management of technology (MOT) process is the assessment of the technologies in the company's technology portfolio. Technology assessment is useful for internal purposes, i.e. to define where R&D efforts should be directed and organized, as well as for external strategies, such as potential licensing, forming alliances, targeting acquisitions, etc. (Jolly, 2003). This text compares Chinese and European practices in the domain of technology assessment. The question is: do Chinese managers operate similarly or differently from European managers when they assess technologies? Or, more precisely, whether a tool developed in a Western context is used in the same way by Western and Chinese managers? Some arguments might be suggested in favour of localization of the assessment tools (such as cultural differences). On the contrary, some might argue in favour of a universal model due to an acceleration of the globalization process worldwide. The aim of this paper is to shed light on this issue. The answer to this question is important, since if some divergent rationales do exist, these might create discrepancies in the context of economic relationships with a foreign partner (for example, diverging assessments of one given technology). This will be particularly sensitive if a joint activity is concerned. The paper starts with a review of the existing literature on technology assessment; the focus is on the multi-criteria used for auditing. Then, problems and hypotheses are discussed. This is followed by methodology, results, discussion and conclusion. This study is probably one of the first to compare Chinese technology auditing practices to European ones.

7.1. Main findings This research brought some technology into the field of international business studies (which had so far not been at the core of these studies). It revealed different beliefs and attitudes of Chinese managers compared to European managers. It showed that: • Chinese managers’ perception regarding the level of attractiveness of the technologies they have in their portfolio do not differ significantly from the perceived attractiveness of the technologies of European managers; it can be inferred from those results that Chinese and European companies are targeting technologies with comparable values. But, Chinese managers do perceive their technological competitiveness as still lacking compared to European ones—and this is more related to technological resources than to complementary assets. As such, a perceived competitiveness gap still exists between China and Europe. • The underlying rationales of Chinese and European managers depart significantly in technological attractiveness evaluations: the two populations develop different acceptations of attractiveness. However, they share much closer views about technological competitiveness assessment. Strong similarities exist in how the two populations combine criteria for assessing competitiveness. 7.2. Limits These results should not be interpreted as the emergence of a distinct Chinese model of MOT. It is rather a picture of similarities and differences between Chinese and European companies in contemporary China. Three limits of this study have to be mentioned: • European and Chinese managers may not understand one given variable the same way and this might have created some discrepancies in the way concepts were perceived. Because, we have not been able to control the possible impacts of cultural differences, measurement equivalence was postulated. • The two sub-samples have very different sizes (82 Chinese, 372 European). Consequently, they do not offer the same quantity of information. This imbalance does not allow to attribute the same level of significance to each sub-sample. Chinese sample size was also too small to search for differences amongst different types of companies (state-owned, Sino-foreign joint ventures, local private companies wholly owned foreign subsidiaries) or different locations (Shanghai, Beijing, Guangzhou, etc.). • Regarding the test of the second hypothesis, the size of the Chinese sub-sample (82) might be considered as just enough. In order to get good results from a factorial analysis, most statistical experts (Hair et al., 1998, p. 99) recommend that the sample size should be four to five times the number of variables (16)—which means here a sample around 64–80. 7.3. Future research Possible extensions of this research might tackle the limits just identified above. The impact of technological intensity (measured as the ratio of R&D expenditures to sales) might also be an interesting control variable as well as different industry types. Another research avenue lies in comparisons with other emerging countries (such as India, Indonesia and Brazil) and with countries like South Korea which are ahead of China since they are not only absorbing and reproducing externally generated knowledge, but have also started to produce truly new technological knowledge (Kim, 1997). Finally, one interesting hypothesis to test would be to check if the Taiwanese rationale is closer to China or to Western countries.