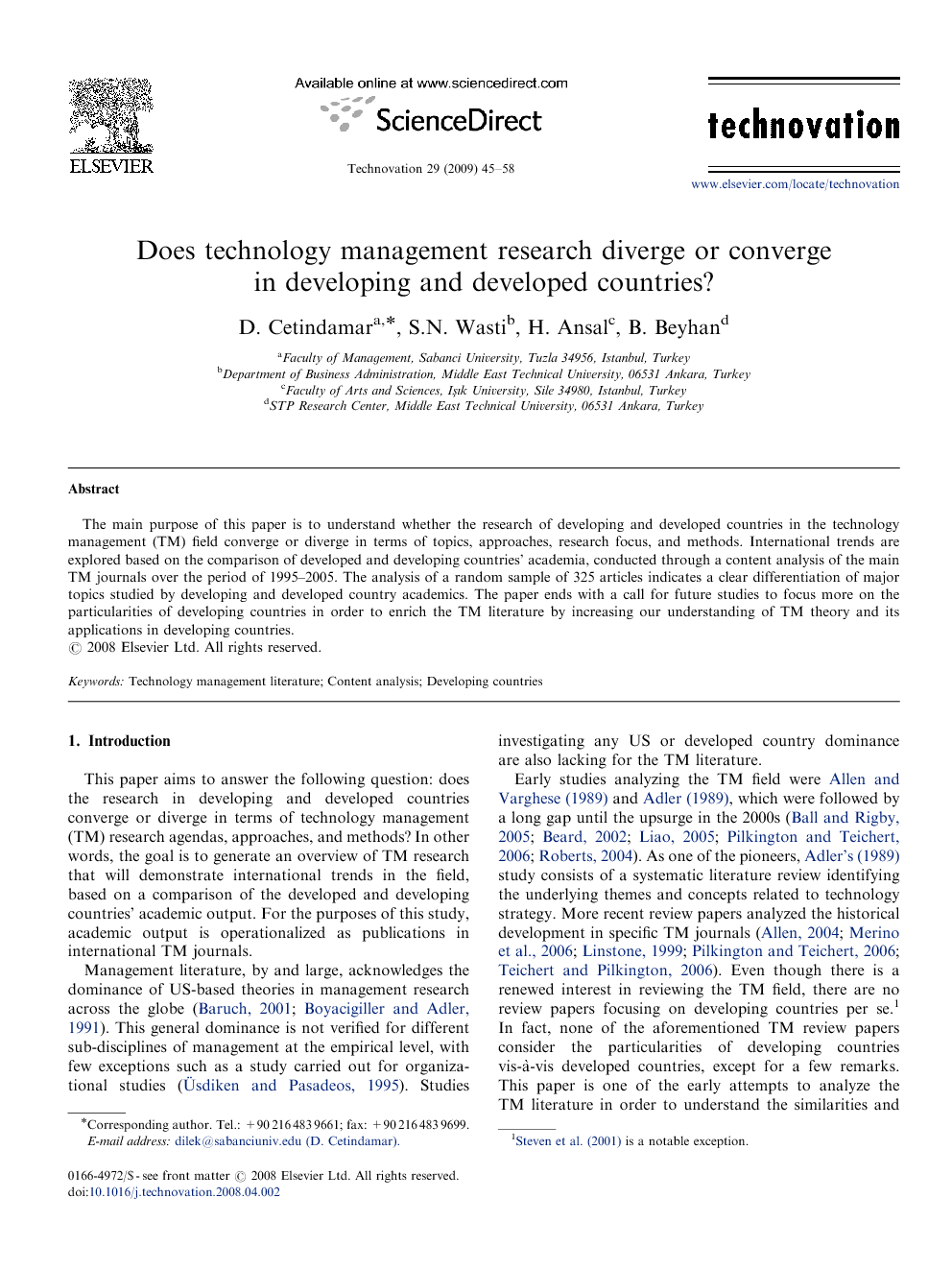 The main purpose of this paper is to understand whether the research of developing and developed countries in the technology management (TM) field converge or diverge in terms of topics, approaches, research focus, and methods. International trends are explored based on the comparison of developed and developing countries’ academia, conducted through a content analysis of the main TM journals over the period of 1995–2005. The analysis of a random sample of 325 articles indicates a clear differentiation of major topics studied by developing and developed country academics. The paper ends with a call for future studies to focus more on the particularities of developing countries in order to enrich the TM literature by increasing our understanding of TM theory and its applications in developing countries.

This paper aims to answer the following question: does the research in developing and developed countries converge or diverge in terms of technology management (TM) research agendas, approaches, and methods? In other words, the goal is to generate an overview of TM research that will demonstrate international trends in the field, based on a comparison of the developed and developing countries’ academic output. For the purposes of this study, academic output is operationalized as publications in international TM journals. Management literature, by and large, acknowledges the dominance of US-based theories in management research across the globe (Baruch, 2001; Boyacigiller and Adler, 1991). This general dominance is not verified for different sub-disciplines of management at the empirical level, with few exceptions such as a study carried out for organizational studies (Üsdiken and Pasadeos, 1995). Studies investigating any US or developed country dominance are also lacking for the TM literature. Early studies analyzing the TM field were Allen and Varghese (1989) and Adler (1989), which were followed by a long gap until the upsurge in the 2000s (Ball and Rigby, 2005; Beard, 2002; Liao, 2005; Pilkington and Teichert, 2006; Roberts, 2004). As one of the pioneers, Adler's (1989) study consists of a systematic literature review identifying the underlying themes and concepts related to technology strategy. More recent review papers analyzed the historical development in specific TM journals (Allen, 2004; Merino et al., 2006; Linstone, 1999; Pilkington and Teichert, 2006; Teichert and Pilkington, 2006). Even though there is a renewed interest in reviewing the TM field, there are no review papers focusing on developing countries per se.1 In fact, none of the aforementioned TM review papers consider the particularities of developing countries vis-à-vis developed countries, except for a few remarks. This paper is one of the early attempts to analyze the TM literature in order to understand the similarities and differences of research published in major TM journals by authors coming from developing and developed countries. A comparative account of research carried out in developed and developing countries is presented along the following dimensions: (1) the general characteristics of articles, such as author affiliations and methodologies used, and (2) in-depth analysis of the research topics. For this purpose, a content analysis is carried out on 10 major TM journals (Ball and Rigby, 2005; Linton and Thongpapanl, 2004), focusing on the period from 1995 to 2005. Section 2 of the paper will present an overview of the TM literature, followed by a section on the methodology adopted in the content analysis of the literature. Section 4 presents the results of the content analysis and hence demonstrates the general trends in TM literature, as well as the differences between developing and developed country TM research. The Section 5 ends with concluding remarks, the limitations of this study, and suggestions for future research.