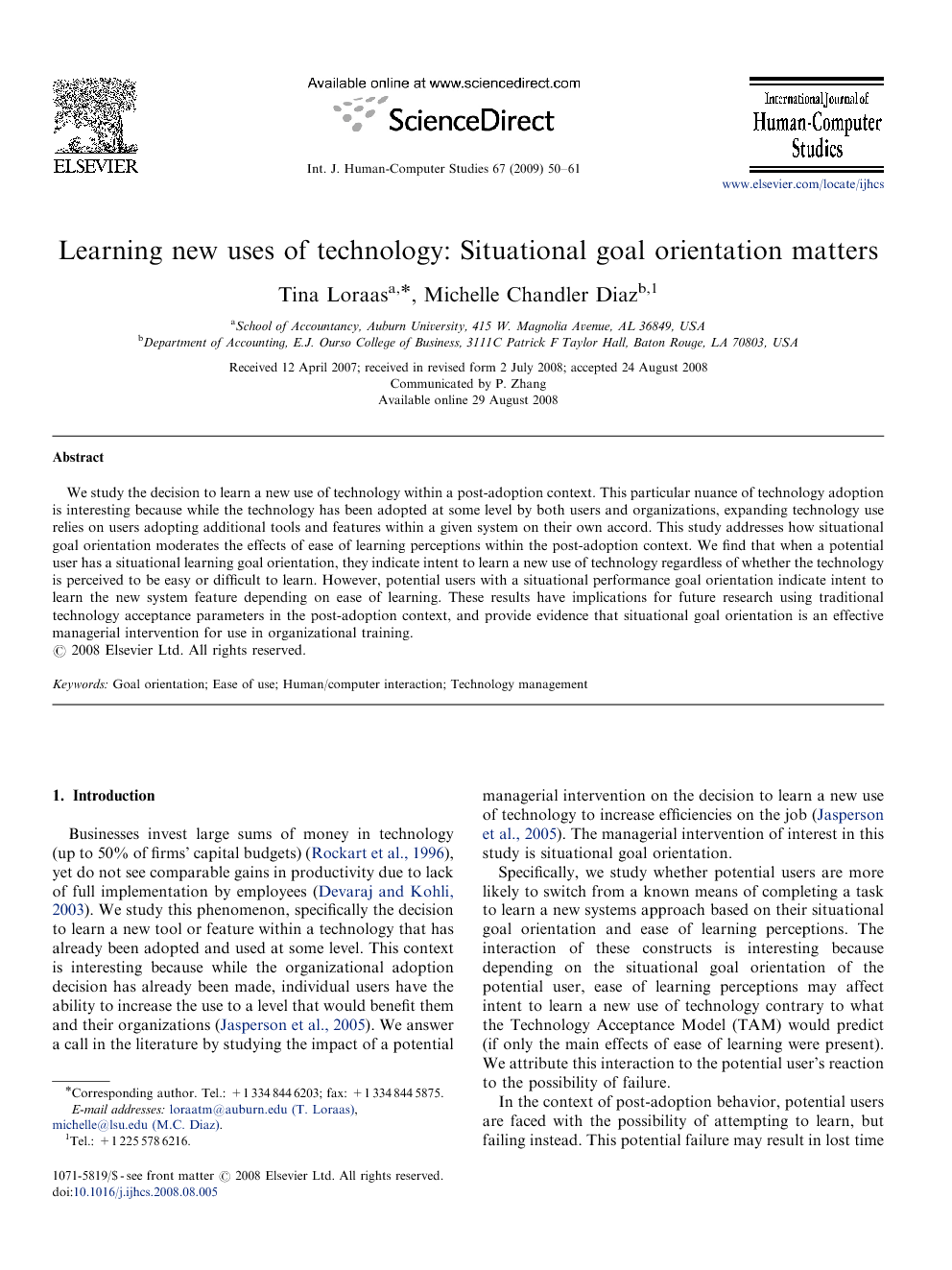 Businesses invest large sums of money in technology (up to 50% of firms’ capital budgets) (Rockart et al., 1996), yet do not see comparable gains in productivity due to lack of full implementation by employees (Devaraj and Kohli, 2003). We study this phenomenon, specifically the decision to learn a new tool or feature within a technology that has already been adopted and used at some level. This context is interesting because while the organizational adoption decision has already been made, individual users have the ability to increase the use to a level that would benefit them and their organizations (Jasperson et al., 2005). We answer a call in the literature by studying the impact of a potential managerial intervention on the decision to learn a new use of technology to increase efficiencies on the job (Jasperson et al., 2005). The managerial intervention of interest in this study is situational goal orientation. Specifically, we study whether potential users are more likely to switch from a known means of completing a task to learn a new systems approach based on their situational goal orientation and ease of learning perceptions. The interaction of these constructs is interesting because depending on the situational goal orientation of the potential user, ease of learning perceptions may affect intent to learn a new use of technology contrary to what the Technology Acceptance Model (TAM) would predict (if only the main effects of ease of learning were present). We attribute this interaction to the potential user's reaction to the possibility of failure. In the context of post-adoption behavior, potential users are faced with the possibility of attempting to learn, but failing instead. This potential failure may result in lost time and productivity, which are valuable commodities. Consideration of failure in a voluntary, post-adoption environment is important, because potential failure is not likely as a steep barrier in initial adoption or mandatory use phases as “failure time” is likely built into the implementation budget. Within the context of post-adoption behaviors, “failure” time would be costly to the user. Thus, this is a dimension of ease of use that should be considered. When considering the impact potential failure has on the decision to learn a new use of technology, we believe that situational goal orientation will be an effective intervention. Goal orientation theory describes how the type of goals pursued by an individual affects decision making (Nicholls, 1984; Dweck, 1986). The two distinct classes of goals that have been identified are learning goals and performance goals. A learning goal is defined by eagerness to learn for the sake of self-improvement, whereas a performance goal is defined by wanting to appear better (or at least no worse than) one's peers. The facet of goal orientation that deals with the reaction to failure is what we find to be interesting in the post-adoption context. With learning goals, failure is deemed a part of the learning process and, as such, is not feared. However, with performance goals, anything that might jeopardize performance is considered a threat, so failure is feared (Button et al., 1996). In the context of this study, if a potential system user has a situational learning orientation, they should view learning a system or a system feature as a positive self-improvement opportunity and intention to learn will not be as heavily influenced by ease of learning perceptions because fear of failure will be diminished. On the other hand, if potential users have a performance orientation, fear of failure will be heightened, which means that intention to learn will be influenced by ease of learning perceptions as traditionally shown in acceptance and/or adoption studies. This study investigates the efficacy of situational goal orientation as a practical managerial intervention that can motivate users to expand their use of technology to increase effectiveness and efficiencies on the job, even when the technology is deemed difficult to use.

We study a mechanism that promotes users of technology to learn new uses of an established system. We investigated the efficacy of situational goal orientation as a managerial intervention that could either promote or dissuade potential users from learning a new use of technology to complete a routine task. We found that individuals primed for learning choose to learn without regard to perceived ease of learning. However, potential users primed with a performance orientation indicated intention to learn depending on ease of learning as would be expected, as ease of learning increased (decreased), intent to learn increased (decreased). It should be noted that the impact of our normative guidance on situational goals, although statistically significant, did not appear to be very strong. That being said, we do find that the situational goal of the potential user influences intent to learn when ease of learning was low. This suggests that looking for more effective ways to modify situational goals may be an effective avenue for future research. However, in all likelihood, in a work environment, a message from a supervisor is likely to have a much greater effect on situational goals than a simple paragraph in an experiment. Another possible explanation for the seemingly small effect size is that the scale used to capture the situational goal of the participant likely also captured elements of the participants’ goal disposition. We believe that there is evidence of this occurring, as the mean of the scale was the scale midpoint with little variance. (If disposition were not captured, we would expect a larger dispersion in scores.) Since we did not measure the participants’ dispositional goal orientation prior to the experiment we cannot say conclusively. However, we did randomize, so a priori dispositional goal orientation effects should be equal across treatments. As in all work of this type, our study has limitations. Our results are dependent on the parameters of the experimental task used. We used point estimates for both system value and ease of learning. Different estimates could lead to different decision outcomes. However, we did find that using contextual expressions in lieu of point estimates did not change behavior. Additionally, participants were required to make a decision in a single period, and did not have the opportunity to “change their mind”. As such, we test a single period decision model. Finally, our experimental task setting is not as rich as a real-world decision context, and actual system usage was never required or observed in the experiment. However, there are a number of studies that indicate intention is a predictor of behavior, which suggests that our measure of intent is meaningful (Dholakia and Bagozzi, 2002).