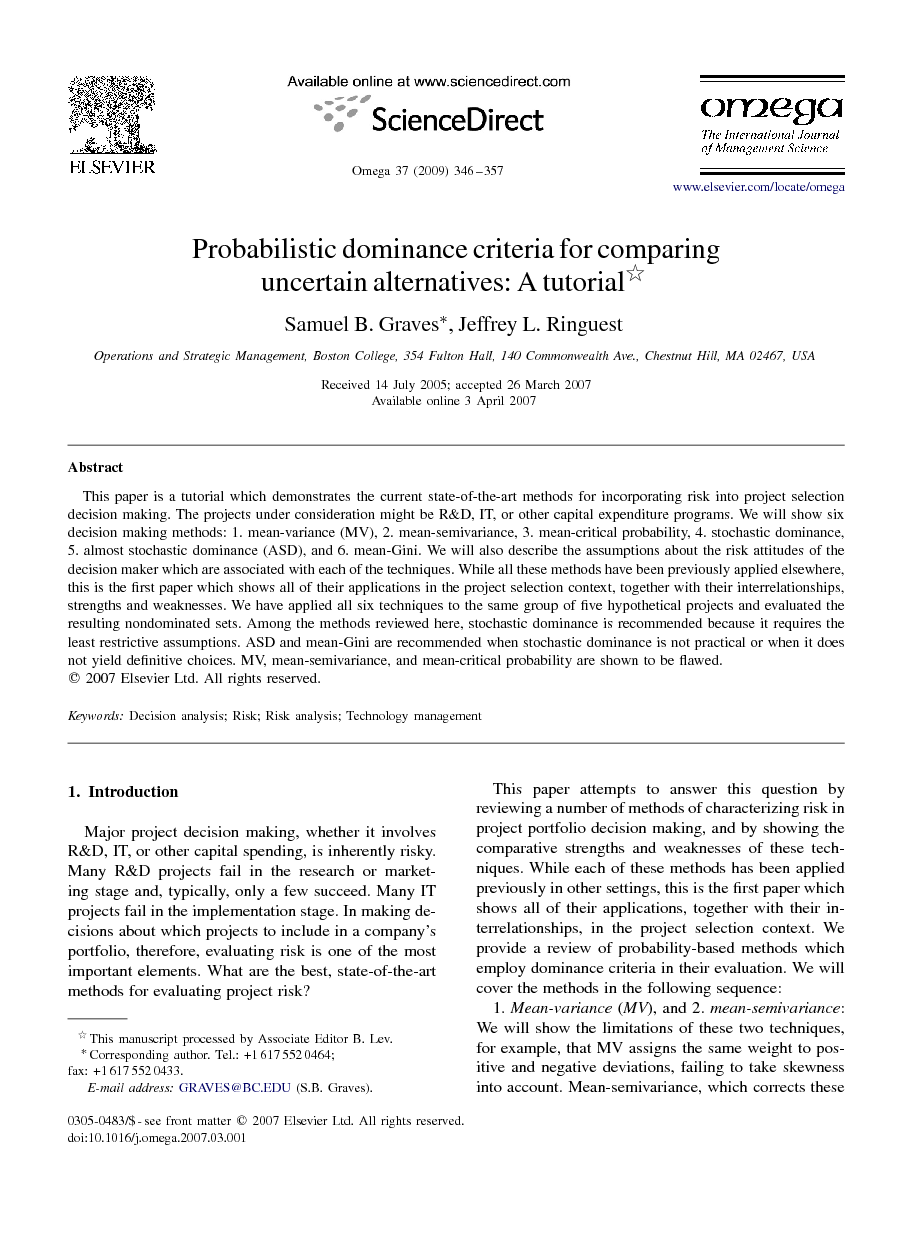 This paper is a tutorial which demonstrates the current state-of-the-art methods for incorporating risk into project selection decision making. The projects under consideration might be R&D, IT, or other capital expenditure programs. We will show six decision making methods: 1. mean-variance (MV), 2. mean-semivariance, 3. mean-critical probability, 4. stochastic dominance, 5. almost stochastic dominance (ASD), and 6. mean-Gini. We will also describe the assumptions about the risk attitudes of the decision maker which are associated with each of the techniques. While all these methods have been previously applied elsewhere, this is the first paper which shows all of their applications in the project selection context, together with their interrelationships, strengths and weaknesses. We have applied all six techniques to the same group of five hypothetical projects and evaluated the resulting nondominated sets. Among the methods reviewed here, stochastic dominance is recommended because it requires the least restrictive assumptions. ASD and mean-Gini are recommended when stochastic dominance is not practical or when it does not yield definitive choices. MV, mean-semivariance, and mean-critical probability are shown to be flawed.

Major project decision making, whether it involves R&D, IT, or other capital spending, is inherently risky. Many R&D projects fail in the research or marketing stage and, typically, only a few succeed. Many IT projects fail in the implementation stage. In making decisions about which projects to include in a company's portfolio, therefore, evaluating risk is one of the most important elements. What are the best, state-of-the-art methods for evaluating project risk? This paper attempts to answer this question by reviewing a number of methods of characterizing risk in project portfolio decision making, and by showing the comparative strengths and weaknesses of these techniques. While each of these methods has been applied previously in other settings, this is the first paper which shows all of their applications, together with their interrelationships, in the project selection context. We provide a review of probability-based methods which employ dominance criteria in their evaluation. We will cover the methods in the following sequence: 1. Mean-variance (MV), and 2. mean-semivariance: We will show the limitations of these two techniques, for example, that MV assigns the same weight to positive and negative deviations, failing to take skewness into account. Mean-semivariance, which corrects these problems of MV, introduces its own problems, for example, requiring the selection of a critical point which can be arbitrary. We will also discuss the assumptions of MV, which place limitations on the decision maker's utility function or on the probability distributions of returns. 3. Mean-critical probability: This is an improvement on the above in that it takes probability into account, but it has limitations similar to mean-semivariance, and still requires the selection of a critical value. Further it considers only a single point from the probability distribution. 4. Stochastic dominance: This is a major improvement over the first three methods described above in that it takes into account the entire probability distribution of returns for each project. This is, in a sense, a generalization of the mean-critical-probability method which considers only a single parameter and a single point from the distribution. And as noted, MV and mean-semivariance consider only two parameters from the distribution. Stochastic dominance has been used in a wide variety of applications, including, for example, financial portfolio analysis Briec and Kerstens [1] and contract evaluation Ward and Chapman [2]. 5. Almost stochastic dominance (ASD): This is a relaxation of the requirements of ordinary stochastic dominance. It corrects for certain conditions where ordinary stochastic dominance yields results inconsistent with the common sense preferences of most decision makers. 6. Mean-Gini: Finally, mean-Gini analysis provides a method which can be used to compare large numbers of projects. The first five methods which we describe are suitable only for pairwise comparisons of projects. Mean-Gini analysis, as we will see, enables us to compare a large number of projects, while satisfying the necessary (and in some cases sufficient) conditions for second degree stochastic dominance (SSD).

We have surveyed six methods for incorporating risk into project selection decision making: 1. MV, 2. mean-semivariance, 3. mean-critical probability, 4. stochastic dominance, 5. ASD, and 6. mean-Gini. We have also applied all six techniques to the same group of five hypothetical projects as described in Table 1, with the results as given in Table 3 above. Of these methods, ordinary stochastic dominance is the most general, requiring the least restrictive assumptions about either the decision maker's utility function or the probability distribution of returns. For this reason it is the method of choice for determining preferences among projects. The difficulty with the stochastic dominance approach is that it may not yield definitive preferences among all alternatives and it may require too many pairwise comparisons to apply in practice. Two good alternatives exist: ASD and mean-Gini analysis. ASD yields preferences that are appropriate for “most” decision makers and may yield more definitive results than SD. In the limit, ASD approaches SD. However, ASD may also require too many pairwise comparisons to be practical. Mean-Gini analysis satisfies the necessary conditions for SSD and satisfies the necessary and sufficient conditions for SSD for some probability distributions. Mean-Gini analysis does not require all pairwise comparisons and it may yield more definitive choices than SSD. Both ASD and mean-Gini are good choices when SD cannot be applied or when it does not yield sufficient preference information. MV, mean-semivariance and the mean-critical value methods all have significant weaknesses. Their primary advantage is their ease of application. We have thus provided a review of probabilistic dominance criteria that follows a logical progression, showing the strengths and limitations of each technique, and the relationships between the various methodologies. This review should provide an authoritative source to managers who need to choose the appropriate method for evaluating risk in their decision making.