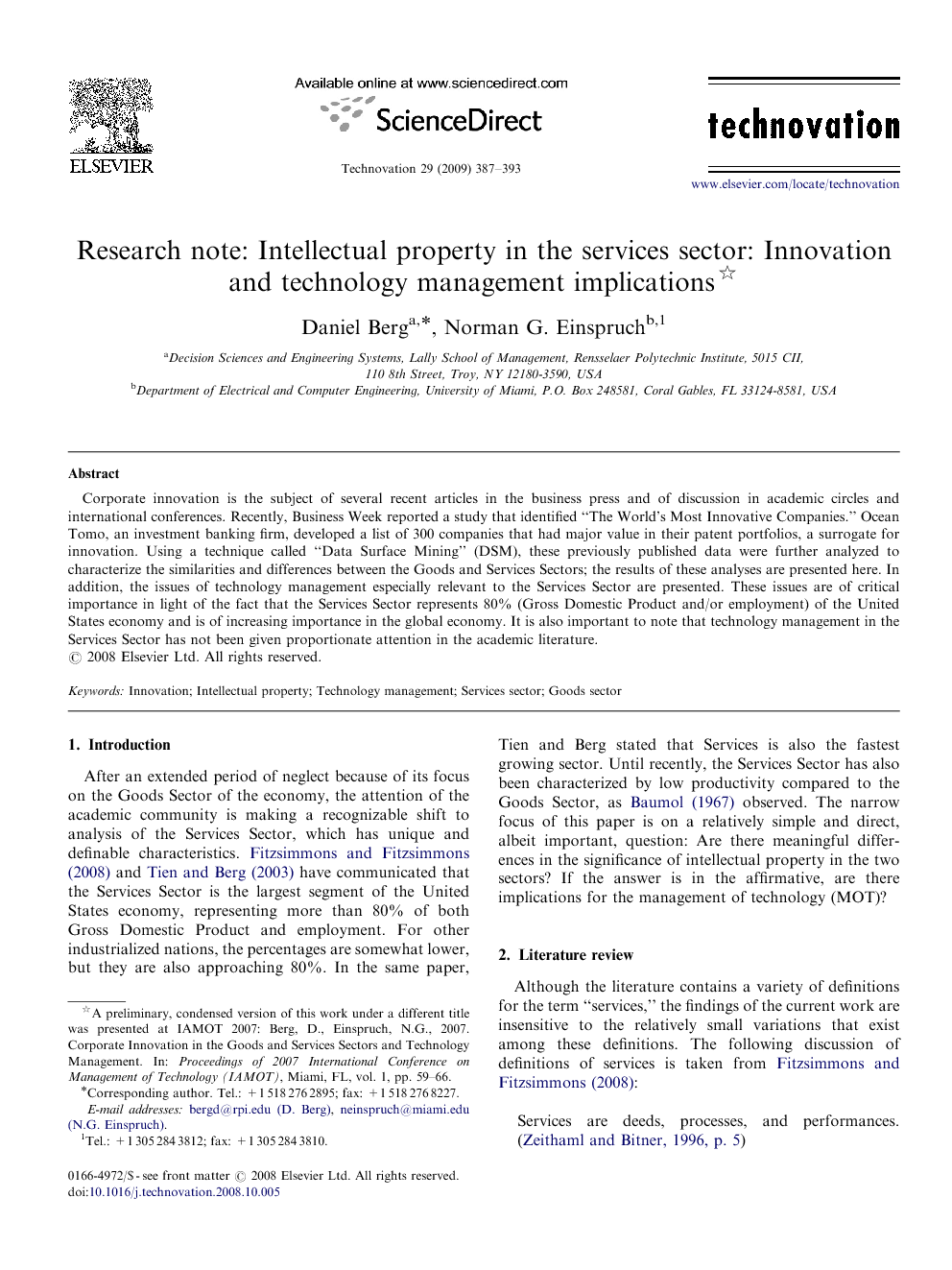 Corporate innovation is the subject of several recent articles in the business press and of discussion in academic circles and international conferences. Recently, Business Week reported a study that identified “The World's Most Innovative Companies.” Ocean Tomo, an investment banking firm, developed a list of 300 companies that had major value in their patent portfolios, a surrogate for innovation. Using a technique called “Data Surface Mining” (DSM), these previously published data were further analyzed to characterize the similarities and differences between the Goods and Services Sectors; the results of these analyses are presented here. In addition, the issues of technology management especially relevant to the Services Sector are presented. These issues are of critical importance in light of the fact that the Services Sector represents 80% (Gross Domestic Product and/or employment) of the United States economy and is of increasing importance in the global economy. It is also important to note that technology management in the Services Sector has not been given proportionate attention in the academic literature.

After an extended period of neglect because of its focus on the Goods Sector of the economy, the attention of the academic community is making a recognizable shift to analysis of the Services Sector, which has unique and definable characteristics. Fitzsimmons and Fitzsimmons (2008) and Tien and Berg (2003) have communicated that the Services Sector is the largest segment of the United States economy, representing more than 80% of both Gross Domestic Product and employment. For other industrialized nations, the percentages are somewhat lower, but they are also approaching 80%. In the same paper, Tien and Berg stated that Services is also the fastest growing sector. Until recently, the Services Sector has also been characterized by low productivity compared to the Goods Sector, as Baumol (1967) observed. The narrow focus of this paper is on a relatively simple and direct, albeit important, question: Are there meaningful differences in the significance of intellectual property in the two sectors? If the answer is in the affirmative, are there implications for the management of technology (MOT)?

Examination of Table 1 indicates that 50 (50%) of the 100 most innovative companies worldwide operate in the Goods Sector. It should be noted that companies such as General Electric, IBM and Hewlett Packard are categorized here as services companies; indeed, they present themselves to the public as such. They undertake to project an image of being technology solutions providers, rather than as manufacturers of hardware. It is reported in the New York Times (see Lohr, 2007) that IBM, as an example, now has services revenues that exceed goods revenues, thereby substantiating their claim. Buying this argument leads one to derive a 50:50 partitioning into the two economic sectors. Examination of Table 2 reveals that 59 (20%) of the companies were in the Services Sector and 241 (80%) were in the Goods Sector, once again reinforcing the idea that the Goods Sector is the seat of innovation, atleast where patent protection is significant. The analyses of two data sets, one based on innovation and the other on patent portfolios, lead to the same conclusion; the skewing of innovation towards the Goods Sector. Although the economy is 80:20 (Goods:Services), the innovation distribution is 50:50 and the patent portfolio distribution is 20:80, illustrating the disproportionate concentration in the Goods Sector of innovation and its surrogate patents. In the Berg and Einspruch (2008b), several data sets were examined with the conclusion drawn that the Goods Sector was the purview of innovation. A possible explanation for that conclusion is the relative role of intellectual property in the two sectors. The patent system lends itself more readily to the protection of physical items invented and produced in the Goods Sector than it does to the intangible items or concepts upon which service businesses are based; it is easier to patent a new computer memory than a novel way to provide food service. Moreover, service businesses generally incorporate and utilize items developed and patented by their suppliers rather than by themselves. The use of this intellectual property is available non-exclusively by product purchase or by license to all competing service providers. Service companies establish defensible boundaries by branding, trademarking, strategy, saturation, franchising, network externalities, etc. rather than by a portfolio of intellectual property. Hipp and Herstatt (2006), Hipp and Grupp (2005), Tether and Hipp (2002), Miles et al. (2002) have focused on the issue of the need for a different analytical conceptual framework to understand service innovation and the protection of its intellectual property. As indicated above, the protection afforded the Goods Sector, especially by patents, is much stronger than for the Service Sector. There are other differences as well pertinent to the issues of MOT. These issues are especially relevant to the Services Sector where, for example, the metrics of quality and productivity are not as well defined as for the Goods Sector. The Goods Sector focuses on physical parameters and other measurables that can be more precisely delineated. Since the service operations require an interaction with the receiver of the service in the production process, the characterization is more difficult. As a result, issues connected to cognitive science, organization, engineering systems, etc. are more prominent in service delivery, productivity and quality. Another fundamental difference in the two sectors is that in the Goods Sector, physical assets depreciate with time and use (as is true in the Services Sector); however, in the Services Sector, key assets are generally reusable and may increase in value with repeated use and time. Such assets are predominantly organization and associated human resources that derive from the knowledge base and skill developed by direct involvement and interaction with the service recipient, who is involved in the economic production of the service. For the reasons enumerated above, MOT issues in the Services Sector focus on knowledge-based understanding of technology and how to use technology rather than how to generate it. As a consequence, the ability of organizations to readily adapt, utilize and incorporate primary technological processes, equipment, etc., which might have been devised outside the organization by others, is critical for success. These distinctions require differences in the MOT as applied in the Goods and Services Sectors. Although this area is receiving increasing attention (Tidd and Hull (2003)), it requires much more focus. DSM was applied in this study to illustrate significant differences in the role that intellectual property plays in the MOT in the two economic sectors, Goods and Services. The field of technology management in the Services Sector requires much more research and analysis than has so far appeared in the scholarly literature. Although academic attention has overwhelmingly focused in the past on the Goods Sector, it is noteworthy that increased attention is now being paid to the Services Sector, by far the largest economic sector domestically and internationally.