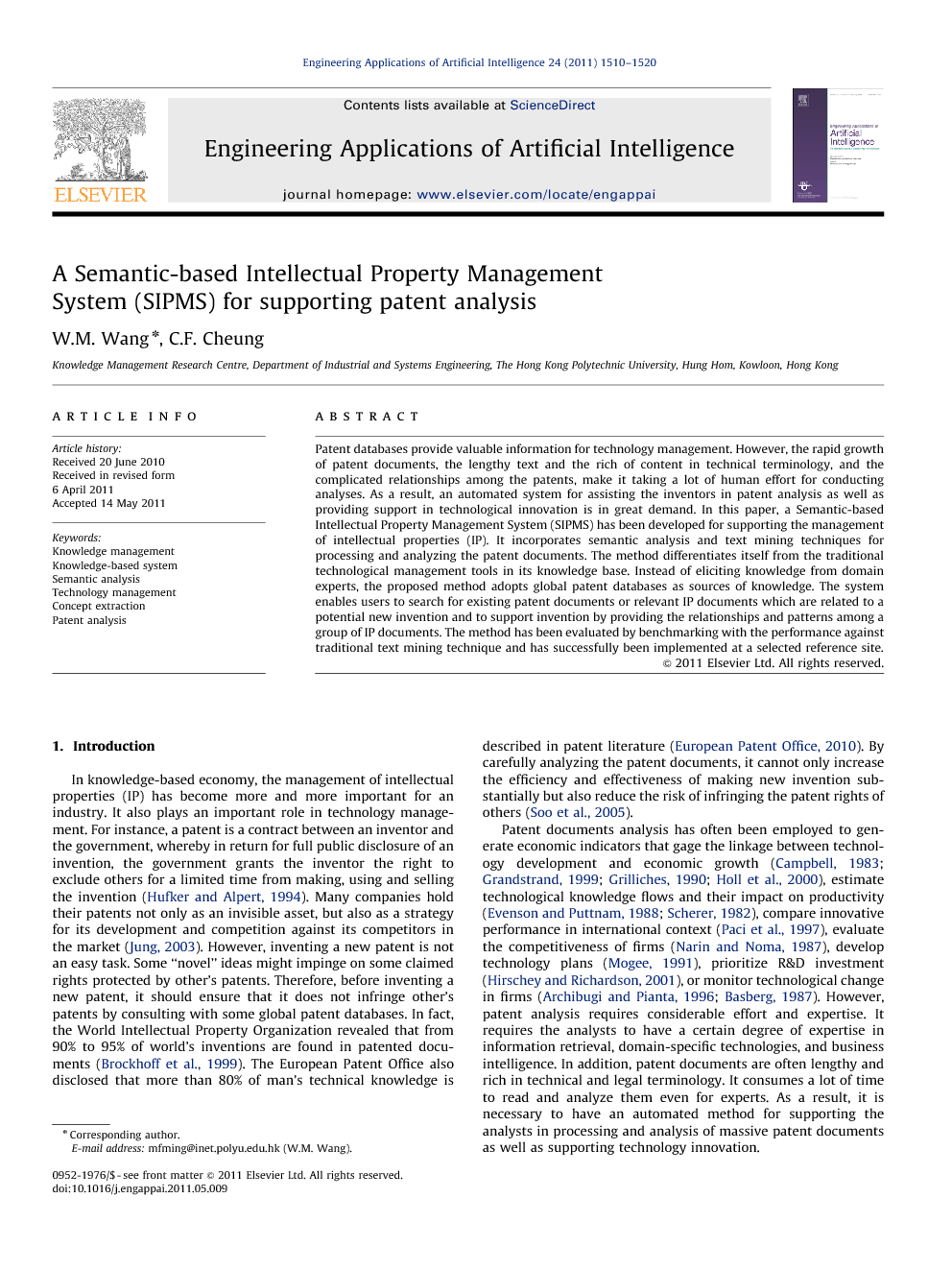 Patent databases provide valuable information for technology management. However, the rapid growth of patent documents, the lengthy text and the rich of content in technical terminology, and the complicated relationships among the patents, make it taking a lot of human effort for conducting analyses. As a result, an automated system for assisting the inventors in patent analysis as well as providing support in technological innovation is in great demand. In this paper, a Semantic-based Intellectual Property Management System (SIPMS) has been developed for supporting the management of intellectual properties (IP). It incorporates semantic analysis and text mining techniques for processing and analyzing the patent documents. The method differentiates itself from the traditional technological management tools in its knowledge base. Instead of eliciting knowledge from domain experts, the proposed method adopts global patent databases as sources of knowledge. The system enables users to search for existing patent documents or relevant IP documents which are related to a potential new invention and to support invention by providing the relationships and patterns among a group of IP documents. The method has been evaluated by benchmarking with the performance against traditional text mining technique and has successfully been implemented at a selected reference site.

In knowledge-based economy, the management of intellectual properties (IP) has become more and more important for an industry. It also plays an important role in technology management. For instance, a patent is a contract between an inventor and the government, whereby in return for full public disclosure of an invention, the government grants the inventor the right to exclude others for a limited time from making, using and selling the invention (Hufker and Alpert, 1994). Many companies hold their patents not only as an invisible asset, but also as a strategy for its development and competition against its competitors in the market (Jung, 2003). However, inventing a new patent is not an easy task. Some “novel” ideas might impinge on some claimed rights protected by other's patents. Therefore, before inventing a new patent, it should ensure that it does not infringe other's patents by consulting with some global patent databases. In fact, the World Intellectual Property Organization revealed that from 90% to 95% of world's inventions are found in patented documents (Brockhoff et al., 1999). The European Patent Office also disclosed that more than 80% of man's technical knowledge is described in patent literature (European Patent Office, 2010). By carefully analyzing the patent documents, it cannot only increase the efficiency and effectiveness of making new invention substantially but also reduce the risk of infringing the patent rights of others (Soo et al., 2005). Patent documents analysis has often been employed to generate economic indicators that gage the linkage between technology development and economic growth (Campbell, 1983, Grandstrand, 1999, Grilliches, 1990 and Holl et al., 2000), estimate technological knowledge flows and their impact on productivity (Evenson and Puttnam, 1988 and Scherer, 1982), compare innovative performance in international context (Paci et al., 1997), evaluate the competitiveness of firms (Narin and Noma, 1987), develop technology plans (Mogee, 1991), prioritize R&D investment (Hirschey and Richardson, 2001), or monitor technological change in firms (Archibugi and Pianta, 1996 and Basberg, 1987). However, patent analysis requires considerable effort and expertise. It requires the analysts to have a certain degree of expertise in information retrieval, domain-specific technologies, and business intelligence. In addition, patent documents are often lengthy and rich in technical and legal terminology. It consumes a lot of time to read and analyze them even for experts. As a result, it is necessary to have an automated method for supporting the analysts in processing and analysis of massive patent documents as well as supporting technology innovation. The paper is outlined as follows. Section 2 reviews the related work of the study which includes patent analysis, text mining, and keyword extraction. Section 3 describes the architecture and the components of the proposed system. Experiments and results for evaluating the system are provided in Section 4. The usefulness and effectiveness of the system in a real-life environment have been studied in Section 5 through a practical implementation of a prototype at a selected reference site. Section 6 is an overall conclusion of the paper, and some suggested areas for further work are also explored in this section.

Effective management of IP is essential for an organization to discover valuable knowledge hidden underneath the sea of information and knowledge. However, the conventional way of IP management which relies on the input of human experts is inadequate. This paper presents SIMPS which serves the purpose of incorporating semantic analysis and text mining techniques for processing and analyzing the unstructured patent documents. The SIMPS allows for retrieving, automatically classifying, capturing and sharing right knowledge from massive unstructured text under multiple concepts at different levels of abstraction. With the successful development and trial implementation of the SIMPS, the accuracy of categorization of unstructured information is improved. It also allows an organization to capture the valuable knowledge embedded in the patent documents. This helps an organization to explore business opportunities for continuous business improvement. Comparing to the existing technologies, the proposed method extracts the key concepts of the patent documents and discovers the relations among the concepts based on the syntactic structure of the documents. This approach is capable of extracting concept and relationship from the document itself rather than retrieved from predefined dictionary. Hence, it enables the approach to be applied in any domains without initial knowledge capture. For future work, the system should be evaluated on larger collections with more candidate users since the results are only preliminary as the number of documents considered is rather small. Furthermore, the current study focuses mainly on the unstructured text. However, lots of valuable information can be discovered from the images of patent documents. Further studies may focus on the analysis of different kind of information.