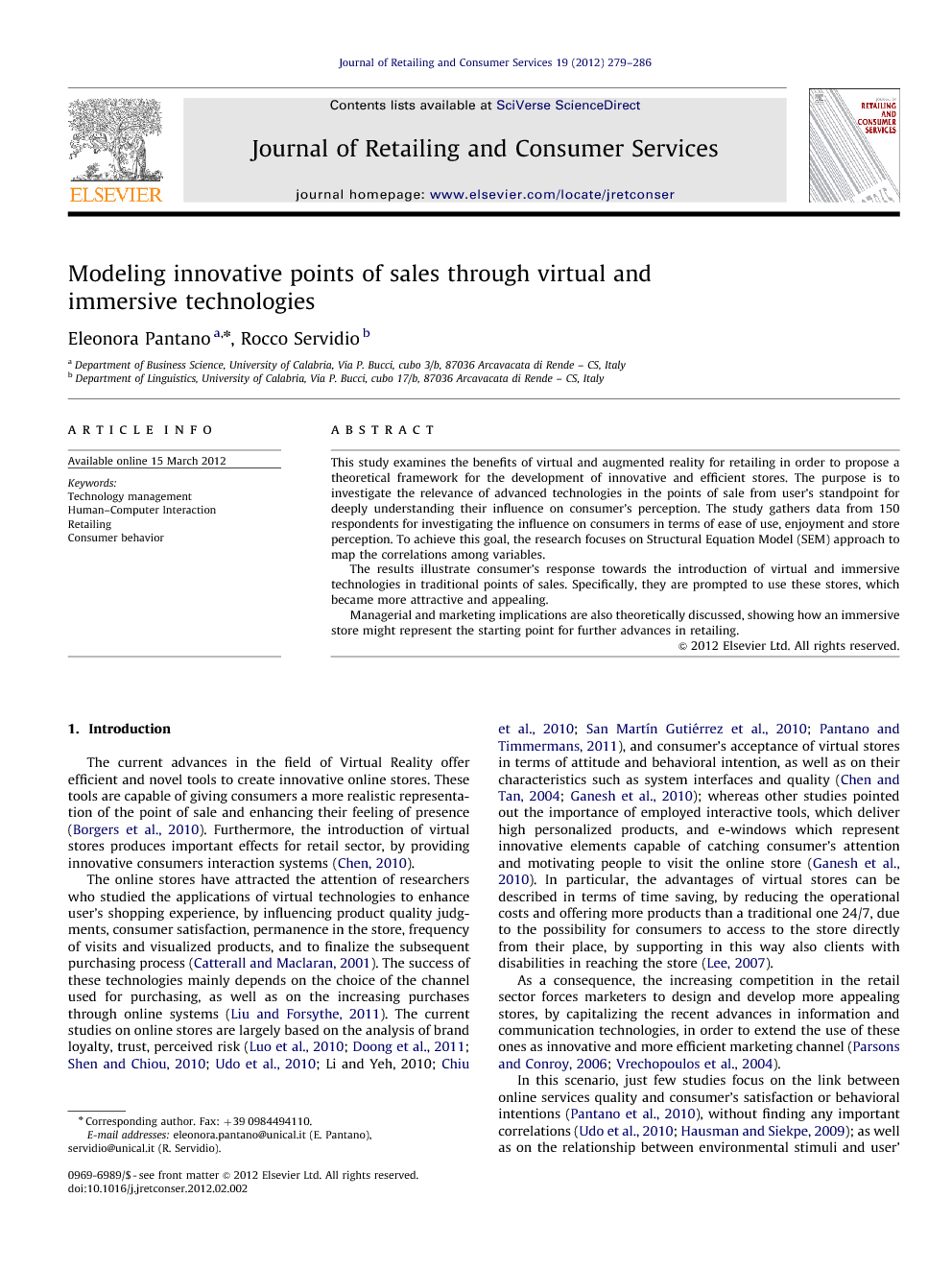 This study examines the benefits of virtual and augmented reality for retailing in order to propose a theoretical framework for the development of innovative and efficient stores. The purpose is to investigate the relevance of advanced technologies in the points of sale from user’s standpoint for deeply understanding their influence on consumer’s perception. The study gathers data from 150 respondents for investigating the influence on consumers in terms of ease of use, enjoyment and store perception. To achieve this goal, the research focuses on Structural Equation Model (SEM) approach to map the correlations among variables. The results illustrate consumer’s response towards the introduction of virtual and immersive technologies in traditional points of sales. Specifically, they are prompted to use these stores, which became more attractive and appealing. Managerial and marketing implications are also theoretically discussed, showing how an immersive store might represent the starting point for further advances in retailing.

The current advances in the field of Virtual Reality offer efficient and novel tools to create innovative online stores. These tools are capable of giving consumers a more realistic representation of the point of sale and enhancing their feeling of presence (Borgers et al., 2010). Furthermore, the introduction of virtual stores produces important effects for retail sector, by providing innovative consumers interaction systems (Chen, 2010). The online stores have attracted the attention of researchers who studied the applications of virtual technologies to enhance user’s shopping experience, by influencing product quality judgments, consumer satisfaction, permanence in the store, frequency of visits and visualized products, and to finalize the subsequent purchasing process (Catterall and Maclaran, 2001). The success of these technologies mainly depends on the choice of the channel used for purchasing, as well as on the increasing purchases through online systems (Liu and Forsythe, 2011). The current studies on online stores are largely based on the analysis of brand loyalty, trust, perceived risk (Luo et al., 2010, Doong et al., 2011, Shen and Chiou, 2010 and Udo et al., 2010; Li and Yeh, 2010; Chiu et al., 2010, San Martín Gutiérrez et al., 2010 and Pantano and Timmermans, 2011), and consumer’s acceptance of virtual stores in terms of attitude and behavioral intention, as well as on their characteristics such as system interfaces and quality (Chen and Tan, 2004 and Ganesh et al., 2010); whereas other studies pointed out the importance of employed interactive tools, which deliver high personalized products, and e-windows which represent innovative elements capable of catching consumer’s attention and motivating people to visit the online store (Ganesh et al., 2010). In particular, the advantages of virtual stores can be described in terms of time saving, by reducing the operational costs and offering more products than a traditional one 24/7, due to the possibility for consumers to access to the store directly from their place, by supporting in this way also clients with disabilities in reaching the store (Lee, 2007). As a consequence, the increasing competition in the retail sector forces marketers to design and develop more appealing stores, by capitalizing the recent advances in information and communication technologies, in order to extend the use of these ones as innovative and more efficient marketing channel (Parsons and Conroy, 2006 and Vrechopoulos et al., 2004). In this scenario, just few studies focus on the link between online services quality and consumer’s satisfaction or behavioral intentions (Pantano et al., 2010), without finding any important correlations (Udo et al., 2010 and Hausman and Siekpe, 2009); as well as on the relationship between environmental stimuli and user’ attention level, in order to improve the online interaction quality (Breugelmans et al., 2007 and Kim et al., 2007). Despite the large deal of research in both online retail patronage behavior and virtual stores (Ganesh et al., 2010), the potentiality of advanced technologies such as augmented reality, ubiquitous computing, and pervasive environments is not fully exploited yet. The aim of this study is to investigate consumer’s response towards the introduction of immersive environments based on the 3D virtual reality in traditional points of sale, in order to understand to what extend these technologies make store more attractive and how they are capable of influencing consumer’s shopping mode choice, as well as their effective integration within traditional retail tools. The first part of the paper is devoted to the current literature on virtual stores characteristics, as well as on their influences on consumer behavior; whereas the subsequent section concerns the employed quantitative methodology and results. The last section highlights the main implications of the research and the related contribution to the literature.

The results of our study outline several issues for retail sector for both researchers and practitioners. In particular, our findings demonstrate that consumer’s perceived enjoyment as a motivating factor for the store choice, as well as for the quality of shopping experience. A contribution of this study carries out also the moderating role of ease of use of the interactive tools on enjoyment, store perception and satisfaction process in the innovative immersive store. Although previous studies highlighted the importance of ease of use in the user’s acceptance of a new technology, just few researches focused on the integration of Virtual Reality applications in a real point of sale. The recognition of the role of enjoyment emerges from the results of this study, in accordance with the results of previous researches (Söderlund and Julander, 2009 and Pantano and Naccarato, 2010). Hence, the association between perceived enjoyment and consumer’s satisfaction in an immersive store can be a first step for synthesizing and integrating models of consumer’s acceptance towards advanced technologies in the traditional points of sale. This research provides a basis for an evaluating framework for highlighting the potential consumer’s behavior towards the introduction of virtual and immersive technologies in traditional retailing. Furthermore, the results outline issues for practitioners in terms of new strategies for renewing traditional stores and make them more convenient for a wider target. In fact, the importance of enjoyment in the point of sale and the subsequent influence on store perception and consumers satisfaction would force retailers to adopt new interactive and enjoying tools in the stores to catch consumer’s interest as in the virtual ones. Since the immersive environments increase consumer’s satisfaction towards the shopping experience, these environments become an innovative tool for the development of a new model of store based on the application of advanced technologies such as virtual and augmented reality. From a managerial point of view, our results provide information on new retail tools capable of monitoring consumer’s behavior in the immersive store. This information might be used to develop new efficient marketing strategies which can be tested in a faster and easier way. The immersive systems affect user’s perception of both the store and available products, by providing them an innovative and high customized service through an interactive and enjoying interface. This one will be tailored to the single consumer’s needs and position. Moreover, the service would represent a better substitute while the standard one is not available (i.e., not sufficient salespersons, the store is too small to show all the collections available, etc.). The transformation of the physical store into a virtual and immersive one requires testing these new environments by also evaluating specific usability issues and human factors criteria. As a consequence, further researches would take into account an interdisciplinary approach which involves different disciplines such as Human–Computer Interaction, Computer Science, Marketing, and Management Engineering. In conclusion, these innovative systems should minimize the consumer’s cognitive load by providing suitable visual interfaces capable of supporting them to finalize the purchase intention. Therefore, virtual stores should adopt new and easier user’s interfaces for an intuitive user’s learning process. These factors might satisfy consumer’s requirements and make the products displaying more evocative, with consequences on both the effectiveness of the mediated message and the cognitive response.