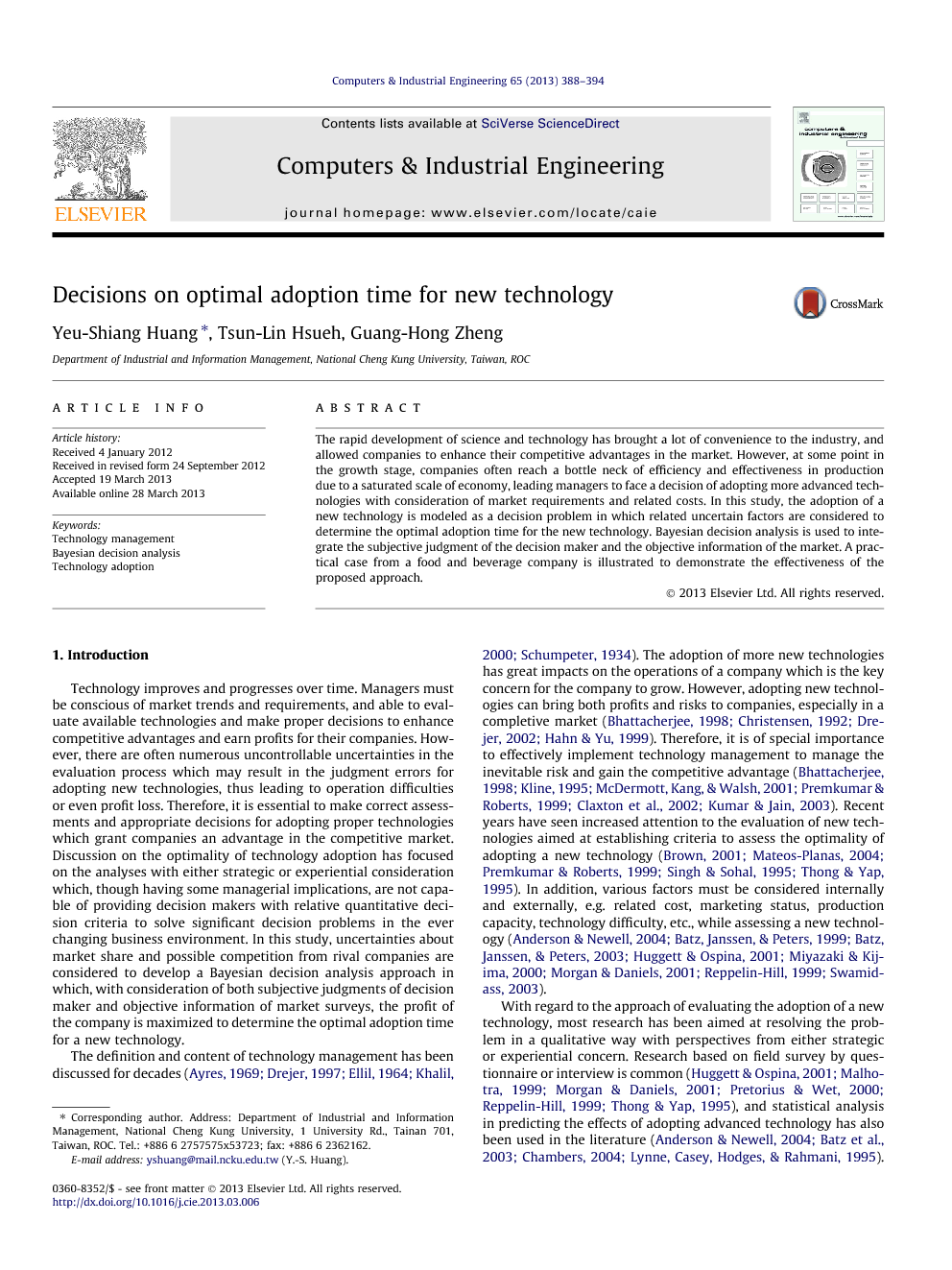 The rapid development of science and technology has brought a lot of convenience to the industry, and allowed companies to enhance their competitive advantages in the market. However, at some point in the growth stage, companies often reach a bottle neck of efficiency and effectiveness in production due to a saturated scale of economy, leading managers to face a decision of adopting more advanced technologies with consideration of market requirements and related costs. In this study, the adoption of a new technology is modeled as a decision problem in which related uncertain factors are considered to determine the optimal adoption time for the new technology. Bayesian decision analysis is used to integrate the subjective judgment of the decision maker and the objective information of the market. A practical case from a food and beverage company is illustrated to demonstrate the effectiveness of the proposed approach.

Technology improves and progresses over time. Managers must be conscious of market trends and requirements, and able to evaluate available technologies and make proper decisions to enhance competitive advantages and earn profits for their companies. However, there are often numerous uncontrollable uncertainties in the evaluation process which may result in the judgment errors for adopting new technologies, thus leading to operation difficulties or even profit loss. Therefore, it is essential to make correct assessments and appropriate decisions for adopting proper technologies which grant companies an advantage in the competitive market. Discussion on the optimality of technology adoption has focused on the analyses with either strategic or experiential consideration which, though having some managerial implications, are not capable of providing decision makers with relative quantitative decision criteria to solve significant decision problems in the ever changing business environment. In this study, uncertainties about market share and possible competition from rival companies are considered to develop a Bayesian decision analysis approach in which, with consideration of both subjective judgments of decision maker and objective information of market surveys, the profit of the company is maximized to determine the optimal adoption time for a new technology. The definition and content of technology management has been discussed for decades (Ayres, 1969, Drejer, 1997, Ellil, 1964, Khalil, 2000 and Schumpeter, 1934). The adoption of more new technologies has great impacts on the operations of a company which is the key concern for the company to grow. However, adopting new technologies can bring both profits and risks to companies, especially in a completive market (Bhattacherjee, 1998, Christensen, 1992, Drejer, 2002 and Hahn and Yu, 1999). Therefore, it is of special importance to effectively implement technology management to manage the inevitable risk and gain the competitive advantage (Bhattacherjee, 1998, Kline, 1995, McDermott et al., 2001, Premkumar and Roberts, 1999, Claxton et al., 2002 and Kumar and Jain, 2003). Recent years have seen increased attention to the evaluation of new technologies aimed at establishing criteria to assess the optimality of adopting a new technology (Brown, 2001, Mateos-Planas, 2004, Premkumar and Roberts, 1999, Singh and Sohal, 1995 and Thong and Yap, 1995). In addition, various factors must be considered internally and externally, e.g. related cost, marketing status, production capacity, technology difficulty, etc., while assessing a new technology (Anderson and Newell, 2004, Batz et al., 1999, Batz et al., 2003, Huggett and Ospina, 2001, Miyazaki and Kijima, 2000, Morgan and Daniels, 2001, Reppelin-Hill, 1999 and Swamidass, 2003). With regard to the approach of evaluating the adoption of a new technology, most research has been aimed at resolving the problem in a qualitative way with perspectives from either strategic or experiential concern. Research based on field survey by questionnaire or interview is common (Huggett and Ospina, 2001, Malhotra, 1999, Morgan and Daniels, 2001, Pretorius and Wet, 2000, Reppelin-Hill, 1999 and Thong and Yap, 1995), and statistical analysis in predicting the effects of adopting advanced technology has also been used in the literature (Anderson and Newell, 2004, Batz et al., 2003, Chambers, 2004 and Lynne et al., 1995). However, the decision of adopting new technologies is complex to an extent that it faces an uncertain business environment and must be determined based on the decision maker’s subjective judgment. The use of decision analysis approach to quantitatively deal with the technology adoption decision problem has not often been seen in the literature. Ilori and Irefin (1997) considered the decision process related to organizational technology innovation and technology adoption procedure based on the analytical steps of decision theory. Farzin, Huisman, and Kort (1998) developed a dynamic framework of decision process with consideration of the degree of technology innovation to predict the opportune moment of adopting an advanced technology. Based on the aforementioned discussion, this study probes into the determination of the optimal adoption time of a new technology upon understanding the competitors’ response’s under different market requirements. This paper is organized as follows: Section 2 states the research problem of new technology adoption; Section 3 depicts the development of the proposed approach; Section 4 demonstrates the effectiveness of the proposed approach by performing numerical investigation; and finally, Section 5 draws the concluding remarks.

The adoption of new technology is a risky investment for companies. Not only does it require a great deal of resources invested in at the introduction stage, but companies must also face whether the enhancement of product quality by the new technology would indeed obtain more market share, not to mention the effects from the competitive reactions of the rival companies. In this study, the decision of the appropriate time of adopting the new technology is made with considerations of both the possible market share enhancement and the influential impact of the rival company’s reaction. The proposed approach of Bayesian decision analysis, which integrates the subjective knowledge of the decision makers and the investigation results of the competitor’s reaction for dealing with the uncertainty of the market status to the new technology adoption decision problem, would thus turn out to be a more convincing and reliable decision making process for gaining more quality decisions. It would be practicable to extend this work for dealing with managers with different risk attitudes. In such case, the assumption of risk neutrality is doubtful, and all the cost-associated factors ought to be reassessed in terms of the perspective of utility. Future work could also be performed on refining the proposed model by considering other possible influential factors, since different products may have different primary concerns which need to be more concentrated. It would be interesting to add more objectives in this analysis. For example, in addition to profit maximization, companies may have another objective of market penetration which can enlarge their market shares. However, such analysis would be expected to be more complicated to perform.