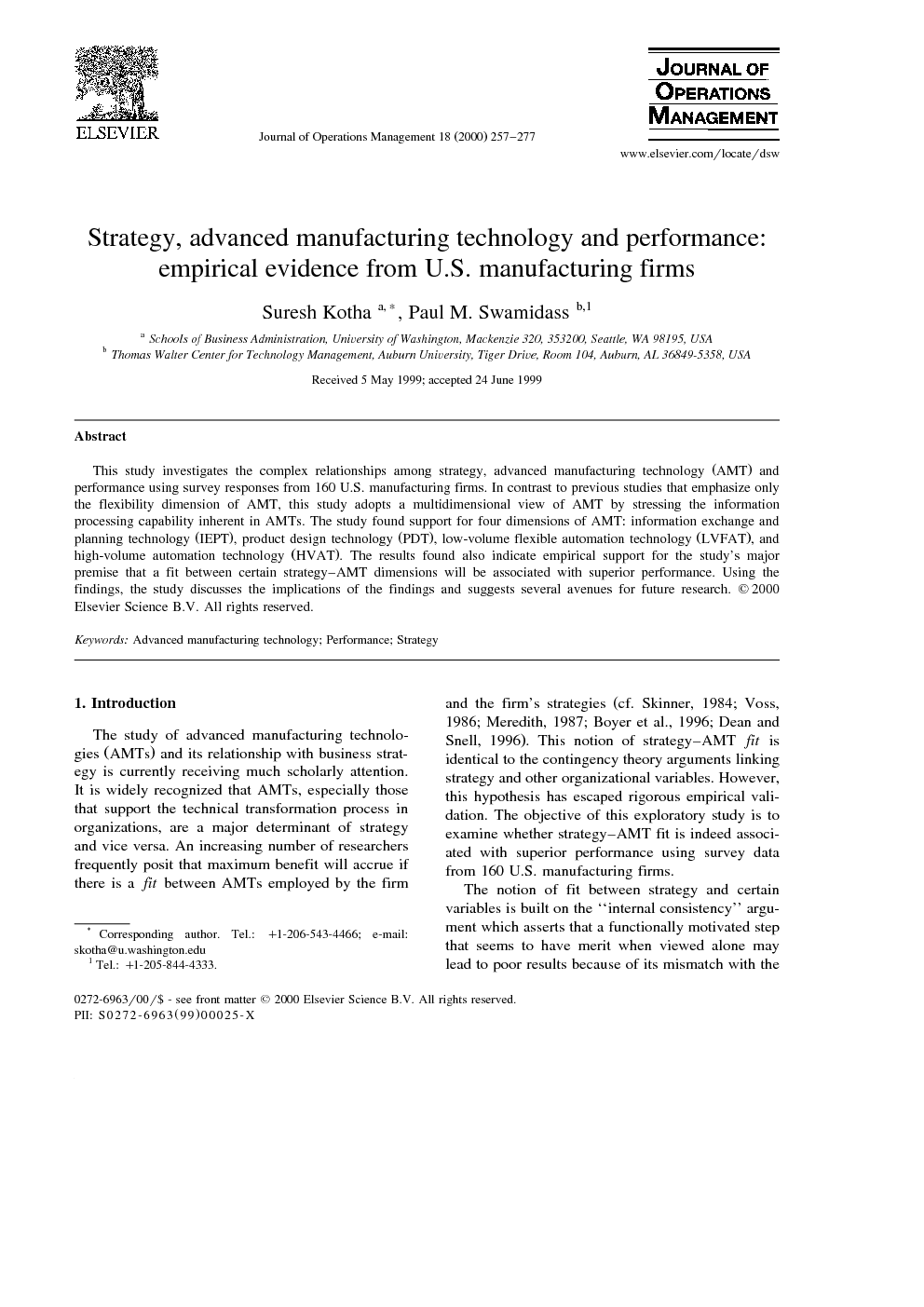 This study investigates the complex relationships among strategy, advanced manufacturing technology (AMT) and performance using survey responses from 160 U.S. manufacturing firms. In contrast to previous studies that emphasize only the flexibility dimension of AMT, this study adopts a multidimensional view of AMT by stressing the information processing capability inherent in AMTs. The study found support for four dimensions of AMT: information exchange and planning technology (IEPT), product design technology (PDT), low-volume flexible automation technology (LVFAT), and high-volume automation technology (HVAT). The results found also indicate empirical support for the study's major premise that a fit between certain strategy–AMT dimensions will be associated with superior performance. Using the findings, the study discusses the implications of the findings and suggests several avenues for future research.

The study of advanced manufacturing technologies (AMTs) and its relationship with business strategy is currently receiving much scholarly attention. It is widely recognized that AMTs, especially those that support the technical transformation process in organizations, are a major determinant of strategy and vice versa. An increasing number of researchers frequently posit that maximum benefit will accrue if there is a fit between AMTs employed by the firm and the firm's strategies (cf. Skinner, 1984; Voss, 1986; Meredith, 1987; Boyer et al., 1996; Dean and Snell, 1996). This notion of strategy–AMT fit is identical to the contingency theory arguments linking strategy and other organizational variables. However, this hypothesis has escaped rigorous empirical validation. The objective of this exploratory study is to examine whether strategy–AMT fit is indeed associated with superior performance using survey data from 160 U.S. manufacturing firms. The notion of fit between strategy and certain variables is built on the “internal consistency” argument which asserts that a functionally motivated step that seems to have merit when viewed alone may lead to poor results because of its mismatch with the firm's strategy orientation (Andrews, 1971). In extending this argument, it is only logical that a number of scholars assert that strategy and AMT should fit each other for the firm to perform well (e.g., Blois, 1985; Lei and Goldhar, 1990; Williams and Novak, 1990; Grant et al., 1991; Parthasarthy and Sethi, 1992 and Parthasarthy and Sethi, 1993; Boyer et al., 1996; Dean and Snell, 1996). On face value, this argument has intrinsic appeal but the evidence directly supporting it is sparse (Boyer, 1997). The strategically important interdependence between AMTs and marketing is well-recognized in the literature. Improved fit between manufacturing capabilities and marketing is now possible with the advent of new AMTs (Blois, 1985; Lei and Goldhar, 1990). For example, Blois (1985)argues that improved effectiveness results when manufacturing capabilities are matched with appropriate changes in the marketing function; a poor match (i.e., lack of fit) will exacerbate the natural differences between the two functions. Many observers (Swamidass, 1988; Williams and Novak, 1990) echo Blois's observations that AMTs can complement marketing strategies thereby enhancing competitive advantage in the following situations where: the product variety demanded by the customers is high, and the markets that the firm competes in are volatile and unpredictable (Pine, 1993). Other manifestations of the strategic AMT–market relationships can be found in firms competing on time-to-market and product variety. For example, Lei and Goldhar (1990)explain why firms that compete on the basis of time-to-market and product variety adopt AMTs that emphasize flexibility (see also Pine, 1993). Another view of strategy–AMT fit can be traced to the notion of “optimal” use of manufacturing technology. According to Grant et al. (1991), “optimal” technology for a business is contingent upon the firm's strategic goals, its available resources, and the nature of its product–market environment. Additionally, Parthasarthy and Sethi (1992)discuss the importance of the reciprocal relationships between technology and strategy. A review of this literature suggests the following conclusion. First, while some arguments for strategy–AMT fit have been put forth, the underlying theoretical rationale for such a match is not fully developed. Perhaps, the notion of strategy–AMT fit is so appealing at face value that a strong theoretical rationale to explain this idea has been slow in coming in the literature. Consequently, the existing AMT classifications need to be reassessed so that strategy orientations and AMT choice at the business unit level can be directly investigated. Second, in recent years, there has been an emphasis on the “flexible” nature of AMT. It is common to classify AMT as either fixed or flexible while other attributes of AMT such as its information processing capabilities are not sufficiently emphasized (cf. Meredith, 1987; Parthasarthy and Sethi, 1993). Is this conceptualization of AMT reasonably complete? Could it be expanded to incorporate or consider the inherent information processing capabilities of AMT that go beyond “flexibility” per se? These issues are addressed as part of this paper. This exploratory study employs a broader conceptualization of AMT in examining whether the strategy–AMT fit leads to superior firm performance. This paper is organized as follows. First, the paper proposes a classification of AMT that captures its multifaceted nature and emphasizes the information processing capability of AMTs. Second, it discusses the theoretical rationale for linking strategy and AMT, and proposes a set of hypotheses highlighting the nature of the linkages. Third, it describes the methods and analysis undertaken to test these hypotheses. Finally, the study's results and avenues for future research on the topic are discussed.