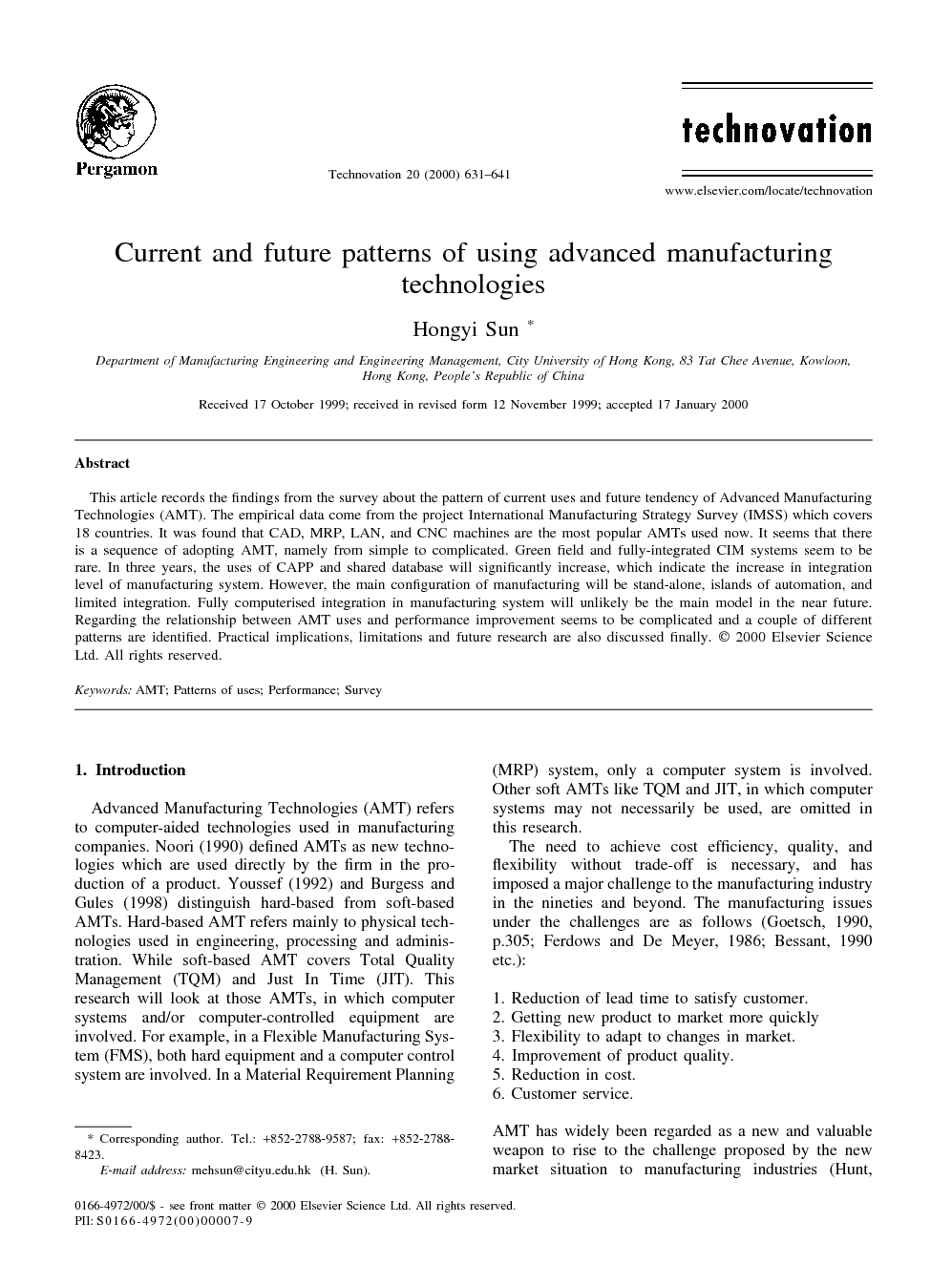 This article records the findings from the survey about the pattern of current uses and future tendency of Advanced Manufacturing Technologies (AMT). The empirical data come from the project International Manufacturing Strategy Survey (IMSS) which covers 18 countries. It was found that CAD, MRP, LAN, and CNC machines are the most popular AMTs used now. It seems that there is a sequence of adopting AMT, namely from simple to complicated. Green field and fully-integrated CIM systems seem to be rare. In three years, the uses of CAPP and shared database will significantly increase, which indicate the increase in integration level of manufacturing system. However, the main configuration of manufacturing will be stand-alone, islands of automation, and limited integration. Fully computerised integration in manufacturing system will unlikely be the main model in the near future. Regarding the relationship between AMT uses and performance improvement seems to be complicated and a couple of different patterns are identified. Practical implications, limitations and future research are also discussed finally.

Advanced Manufacturing Technologies (AMT) refers to computer-aided technologies used in manufacturing companies. Noori (1990) defined AMTs as new technologies which are used directly by the firm in the production of a product. Youssef (1992) and Burgess and Gules (1998) distinguish hard-based from soft-based AMTs. Hard-based AMT refers mainly to physical technologies used in engineering, processing and administration. While soft-based AMT covers Total Quality Management (TQM) and Just In Time (JIT). This research will look at those AMTs, in which computer systems and/or computer-controlled equipment are involved. For example, in a Flexible Manufacturing System (FMS), both hard equipment and a computer control system are involved. In a Material Requirement Planning (MRP) system, only a computer system is involved. Other soft AMTs like TQM and JIT, in which computer systems may not necessarily be used, are omitted in this research. The need to achieve cost efficiency, quality, and flexibility without trade-off is necessary, and has imposed a major challenge to the manufacturing industry in the nineties and beyond. The manufacturing issues under the challenges are as follows (Goetsch, 1990, p.305; Ferdows and De Meyer, 1986 and Bessant, 1990 etc.): 1. Reduction of lead time to satisfy customer. 2. Getting new product to market more quickly 3. Flexibility to adapt to changes in market. 4. Improvement of product quality. 5. Reduction in cost. 6. Customer service. AMT has widely been regarded as a new and valuable weapon to rise to the challenge proposed by the new market situation to manufacturing industries (Hunt, 1987 and Noori, 1990). In the past 20 years, AMT has been widely used by manufacturing companies all over the world. However, world-wide research found that not all AMT perform as expected. Some AMT perform very bad and leads to a total failure. Some AMTs perform “satisfactory”, but did not produce the full benefits. Other AMTs perform well on the shop floor level, while the business performances of the companies were not improved (Voss, 1988). All these problems have caught the attention of both researchers and practitioners. Since the beginning of the 1980s, management of technology, especially implementation of AMT has been a hot topic (Voss, 1988). Other researchers investigated the relationship between the uses of AMT and performance improvement. The relationship was investigated conceptually (Macbeth, 1989, p.71; Bishop and Schofield, 1989, p.44), by case studies (Sohal, 1996 and Sun et al., 1999) or by survey (Sun, 1996 and Small, 1998). However, there is a big gap in recent literature about the patterns of AMT uses and the future tendency of its uses. This research aims to investigate these based on the empirical data from 18 countries. The pattern or sequence of AMT adoption, the future tendency of AMT uses, and their contributions will also be investigated. The research will contribute to identifying the configurations of current and future manufacturing systems. This article is structured as follows. After this introduction section, literature review and research framework will be introduced in the second section. Research method and empirical data will be described in the third section. The analysis results will be presented in the fourth section. Conclusions and implications will be discussed in the last section.