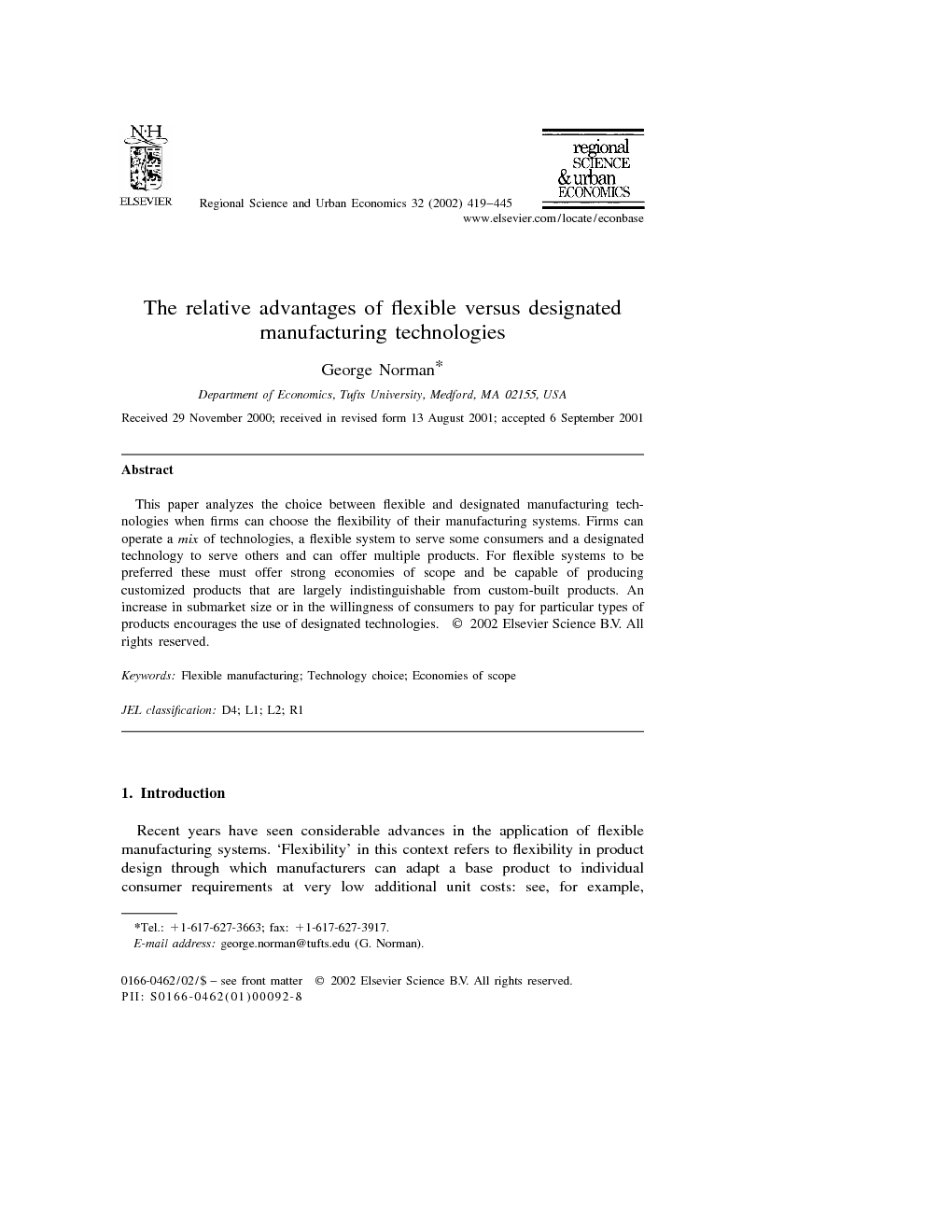 This paper analyzes the choice between flexible and designated manufacturing technologies when firms can choose the flexibility of their manufacturing systems. Firms can operate a mix of technologies, a flexible system to serve some consumers and a designated technology to serve others and can offer multiple products. For flexible systems to be preferred these must offer strong economies of scope and be capable of producing customized products that are largely indistinguishable from custom-built products. An increase in submarket size or in the willingness of consumers to pay for particular types of products encourages the use of designated technologies.

Recent years have seen considerable advances in the application of flexible manufacturing systems. ‘Flexibility’ in this context refers to flexibility in product design through which manufacturers can adapt a base product to individual consumer requirements at very low additional unit costs: see, for example, Milgrom and Roberts (1990), Mansfield (1993). Specifically, a flexible manufacturing system is defined as: a production unit capable of producing a range of discrete products with a minimum of manual intervention (US Office of Technology Assessment, 1984, p. 60). Flexible systems are employed in the manufacture of an increasingly wide range of goods, from ceramic tiles to Levi jeans and custom shoes to data-warehousing. It is now being suggested that such flexibility will find a natural outlet as e-commerce continues to expand. For example, the New York Times recently stated: What this means in practice is that rather than displaying the same set of pages to every visitor, a Web site would present different information to each customer based on the person’s data profile. (New York Times, ‘Internet Companies Learn how to Personalize Services’, August 28, 2000). With the advent of flexible manufacturing systems, technology choice becomes an important strategic issue. The adoption of flexible manufacturing confers advantages that are primarily based upon economies of scope but imposes penalties with respect to the additional set-up costs that are necessary to establish such flexible systems: see, for example, Chang (1993), Röller and Tombak, 1990 and Röller and Tombak, 1993, Norman and Thisse (1999). The existing literature that attempts to address these strategic issues is limited in several respects. In particular, two important questions are not considered. Given that a firm adopts a flexible manufacturing system (i) How does it choose the range of products it should offer? (ii) Will a firm wish to operate a mix of flexible and designated technologies? Question (i) is related to much of the recent literature on product variety in horizontally differentiated industries and leads to another important question: (iii) With endogenous technology choice will we see product agglomeration as, for example, is discussed in Hamilton et al. (1989) and Anderson and Neven (1990)? This paper attempts to shed some light on these questions. Strategic choice of technology is analyzed using an address model that is familiar from the literature on horizontal product differentiation. Applications of this approach to flexible manufacturing have been developed by Eaton and Schmitt (1994) and Norman and Thisse (1999). They build on the seminal ideas of Hotelling (1929) that recognize the direct analogy that can be drawn between spatial models and models of product differentiation. MacLeod et al. (1988) show how this analogy has the potential for being applied directly to the strategic analysis of flexible manufacturing: the producer begins with a ‘base product’ and then redesigns this product to the customers’ specifications. This means that the firm now produces a band of horizontally differentiated products … instead of a single product … Transport cost is no longer interpreted as a utility loss, but as an additional cost incurred by the firm in adapting its product to the customer’s requirements. (1988, pp. 442–443). All of the current literature on flexible manufacturing presents firms with a stark choice. Choose between a flexible or a designated technology. If the designated technology is chosen, the firm is further committed to being a single-product firm. This misses an important issue that is central to our analysis and is the first main contribution of this paper. We consider not just the choice between flexible and designated manufacturing technologies but also the choice of just how flexible the manufacturing system should be. The point is that the ‘width’ of the band of products that a flexible system is capable of producing should be endogenous to the analysis, with firms trading off increased width against the additional set-up costs that increased width imposes.1 This leads naturally to two further important elements of our analysis. First, we explicitly allow firms to operate a mix of technologies, using a flexible system to serve some types of consumer and a designated technology to serve others. Secondly, we explicitly allow firms to offer multiple products even if they commit to the designated technology. This naturally leads to the possibility that there will be asymmetry in technology choice in that the strategic choice of flexible systems by one firm will encourage another firm to adopt a different technology choice. Our analysis suggests that technology choice is determined by several factors. First, we show that the attractiveness of flexible manufacturing is affected by the balance between the economies of scope offered by flexible manufacturing and the economies of scale offered by designated technologies. Secondly, the advantages of flexible systems are affected by consumer tastes and the ability of flexible manufacturing systems to deliver, at low cost, customized products that are truly substitutable for custom-built products. Thirdly, we show that technology choice is affected by market size and the willingness of consumers to pay for products of particular types. While our primary concern in this paper is with product differentiation and technology choice there are connections to models of spatial competition that are worth noting. When viewed in this light, our model confronts firms with a trade-off between the additional set-up costs that allow them to supply multiple markets from a central location and the transportation costs that such centralized production imposes. There is, for example, an obvious connection between our model and game-theoretic analyses of foreign direct investment (Motta and Norman, 1996; Rowthorn, 1992). The novel features of our analysis now are first, that firms have the option of operating multiple plants (locations) and secondly, that they can adopt a mix of centralized and localized operations. The remainder of the paper is structured as follows. In the next section we develop the basic model, presenting the choice between designated and flexible technologies as a simultaneous three-stage technology/location/quantity game. Section 3 identifies the subgame perfect Nash equilibria for this game. We discuss the primary determinants of technology choice in Section 4. Some brief normative comments are made in Section 5 and we present some brief concluding remarks in the final section.

Flexible manufacturing systems capable of customizing products to the tastes of heterogeneous consumers are generally regarded as being superior to technologies that are capable only of producing designated or niche products. If that is so then we should expect over time that flexible technologies will drive out inflexible ones. There are, however, reasons for questioning this apparently appealing conclusion. In earlier work Norman and Thisse (1999) argue that flexible manufacturing leads to a more competitive pricing regime with the result that adoption of such technologies might actually reduce profitability. Our analysis in this paper suggests other reasons for skepticism regarding the evolutionary dominance of flexible systems. The analysis of competing technologies should allow for the possibility that firms offer multiple products, are able to choose the degree of flexibility of any flexible system that they employ, and are able to deploy a mix of technologies. This leads to a rather more complex set of trade-offs. It remains the case that flexible technologies are preferred when they offer strong economies of scope relative to the economies of scale available from designated technologies and when the customized products of flexible technologies can be made practically indistinguishable from custom-built products at very little cost penalty. On the other hand, we have shown that flexible technologies are not necessarily preferred when consumers differ widely in their preferences. In such circumstances it may well be better for the firm to offer multiple designated products, each targeted at a particular part of the taste spectrum. By a similar argument, our analysis suggests that as particular parts of the consumer taste spectrum grow in size and as consumer incomes rise it may be better for firms to produce niche products designed specifically for particular submarkets rather than try to serve these markets by using flexible manufacturing to customize a base product centered in another submarket. In other words, the future scenario is likely to exhibit a high degree of heterogeneity in the technologies that firms employ, with firms operating a range of technologies of varying degrees of flexibility determined by the precise characteristics of the markets they are trying to capture and the ability of the flexible technology accurately to target particular consumer requirements. In a more explicitly spatial context our analysis points to a similar trade-off between transport costs and set-up costs, the innovative feature of our analysis being that a firm can adopt a mix of export-based and localized production strategies. Reductions in the barriers to the movements of goods between markets favor centralized, export-based operations and also favor agglomeration by non-cooperative firms. By contrast, local market and income growth can be expected to encourage firms to move away from centralized operations and to adopt multiplant and multilocation strategies. The connection between these results and, for example, the recent literature on foreign direct investment is obvious.