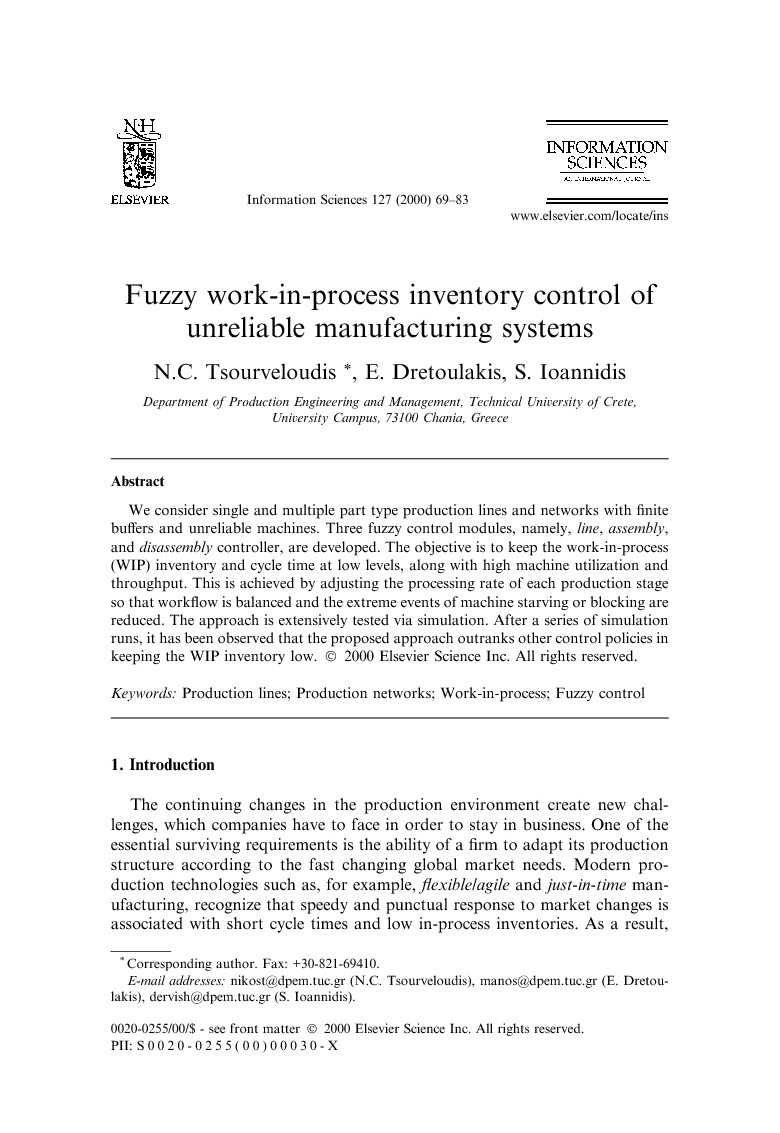 We consider single and multiple part type production lines and networks with finite buffers and unreliable machines. Three fuzzy control modules, namely, line, assembly, and disassembly controller, are developed. The objective is to keep the work-in-process (WIP) inventory and cycle time at low levels, along with high machine utilization and throughput. This is achieved by adjusting the processing rate of each production stage so that workflow is balanced and the extreme events of machine starving or blocking are reduced. The approach is extensively tested via simulation. After a series of simulation runs, it has been observed that the proposed approach outranks other control policies in keeping the WIP inventory low.

The continuing changes in the production environment create new challenges, which companies have to face in order to stay in business. One of the essential surviving requirements is the ability of a firm to adapt its production structure according to the fast changing global market needs. Modern production technologies such as, for example, flexible/agile and just-in-time manufacturing, recognize that speedy and punctual response to market changes is associated with short cycle times and low in-process inventories. As a result, control policies that tend to keep work-in-process (WIP) in low levels have drawn a great deal of attention from researchers and practitioners. WIP inventory is measured by the number of items in each buffer and should stay small because of various reasons [5] and [9]: • Capital invested to inventories as long as they remain in the factory or the warehouse provides no profit. •High in-process inventories increase cycle times and decreases responsiveness to customers. •High in-process inventories require more space and expensive material handling equipment increasing the invested capital. • Inventory quality decreases as the unfinished items remain to the factory because they are vulnerable to damage. Many researchers have studied the problem of WIP management in unreliable production systems [1], [2], [3], [5], [9], [12] and [13]. Conway et al. [5] examined the effects of in-process inventory in production lines. Bai and Gershwin introduced a WIP control algorithm for scheduling single [4] and multiple part-type [3] production lines. In almost all works, WIP inventories are associated with built-in parameters of the system, as for example, the number of wokstations/machines, their processing rate, the interstation buffer capacity and assumptions concerning failure and repair rate of each machine. It is also a common belief that the large size of real production systems along with the effects of failures occurring in such systems, do not allow for an analytic treatment of WIP minimization [9]. Since analytical solutions are not attainable, heuristic policies are suggested to control job flow within production systems [2], [3] and [4] sometimes supported by fuzzy set theory [6] and [7]. In this paper, we develop a distributed fuzzy control methodology for single and multiple part-type production lines and networks. The overall control objective is to keep the WIP and cycle time as low as possible, and at the same time to maintain high machine utilization and throughput. In contrast to the traditional produce-at-capacity approach, according to which the system always operates at its maximum capacity, we control the production rate in each production stage in a way that eliminates extreme events of idle periods due to machine starving or blocking. The next section describes the three production modules and the proposed architecture of the distributed fuzzy logic control system that is used. There, we also present a fuzzy logic formulation of the WIP control problem. In Section 3, simulation results are drawn along with comparisons, and in Section 4, the contribution of this work is summarized and further work is outlined.

We have presented a distributed fuzzy controller, which keeps production close to demand and WIP inventories in low levels by regulating the processing rate of each machine. The proposed control system consists of three independent modules and can be applied to production networks of general topology. The structural advantage of the approach presented here is that it allows for an operator-like knowledge representation and reasoning. Numerous simulation experiments verified controller’s good performance. A continuous-flow simulator is used to compare the proposed WIP controller with produce-at-capacity and hedging point methods. For the test cases examined, it turned out that the fuzzy policy provides lower WIP, higher system utilization, and smaller product cycle time. An interesting extension, to be considered in the future, would consist of examining the performance of WIP controller when applied to reentrant systems, in which parts may visit some machines more than once. More complex patterns of demand should be considered.