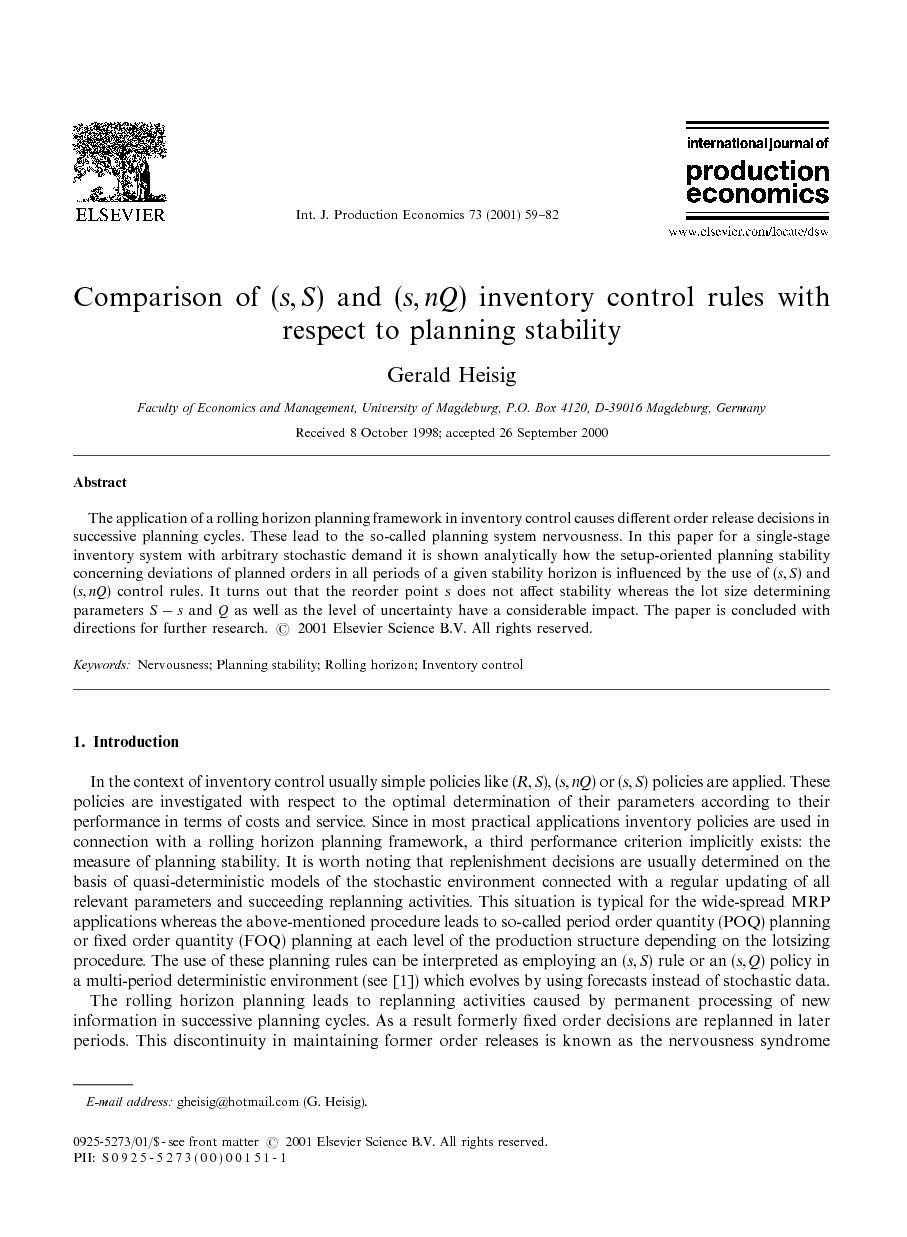 The application of a rolling horizon planning framework in inventory control causes different order release decisions in successive planning cycles. These lead to the so-called planning system nervousness. In this paper for a single-stage inventory system with arbitrary stochastic demand it is shown analytically how the setup-oriented planning stability concerning deviations of planned orders in all periods of a given stability horizon is influenced by the use of (s,S) and (s,nQ) control rules. It turns out that the reorder point s does not affect stability whereas the lot size determining parameters S−s and Q as well as the level of uncertainty have a considerable impact. The paper is concluded with directions for further research.

In this paper it is shown that for basic inventory control rules like (s,nQ) and (s,S) policies analytical insights in the effects on setup planning stability can be given. Nervousness is not affected by the reorder point s, but the choice of the lot size Q and the minimum reorder quantity S−s, respectively, and the length of the stability horizon T as well as the weighting of the periods within T have a significant impact on the planning stability. Moreover, bad demand forecasts may cause a poor stability performance of the inventory control system. For both policies a high level of nervousness is caused by setting the lot size approximately equal to the forecasted demand per period. Furthermore, for an (s,S) policy a low level of stability is reached if the lot size is set to a multiple of the forecasted demand per period. In particular minimum stability may be attained for reorder quantities which are twice as large as the forecasted demand per period. Additionally, for both policies a change of the length of the stability horizon lead to a change of the level of planning stability. For reason of analytical tractability some specific assumptions concerning the distribution of the demand have been made. By simulation studies considering the impact of the lot size and the influence of the demand uncertainty it can be shown (see [3]) that our results also hold for more global situations. Summarizing it can be stated that, if nervousness plays a role, inventory control rules and control parameters should be determined under additional consideration of their stability effects. In particular, the choice of the lot size has a considerable impact on stability. Similar to service level constraints which ensure a certain level of customer service with respect to cost considerations, in inventory control the additional factor of planning stability can be included by using analogous stability constraints. The results given in this paper give some insights how lotsizing has to be restricted if such constraints with respect to a specified amount of nervousness are given by the management. Moreover, planning stability can be improved by modifying planning procedures and applying more complex control rules employing additional parameters (see [2], [3], [12] and [17]). The analysis presented here can be extended in several aspects. In a next step the analysis might be extended to the quantity-oriented long-term planning stability for the basic inventory control rules like the (R,S), (s,nQ) and (s,S) policy (see [8] for a comparison of basic inventory control rules with respect to their performance in short-term quantity-oriented planning stability). Moreover, an analytical study of the improvement of the planning stability by introducing a stabilization parameter seems to be promising (see, e.g., [3]). Finally, the planning stability of multi-stage inventory systems should be considered. There are first simulation experiments for simple systems, e.g., in [3] a two-stage serial as well as a divergent system are considered (see [3, p. 219]). These studies indicate that the control rule used at the end-item level has a major influence on the stability performance of the entire system. If in a multi-stage system the end-item level is controlled by a reorder point policy, and a lot-for-lot policy is used on upstream stages, then our results can directly be applied to such a multi-stage system. Since orders are placed in the same period at all stages, only the size of the order at each level may be altered, but there are no new, previously unplanned orders. Consequently, setup stability at the final product stage represents the planning stability of the entire system (see also [4] and [17] where, besides other strategies, the application of a lot-for-lot policy on upstream stages is suggested to stabilize production schedules).