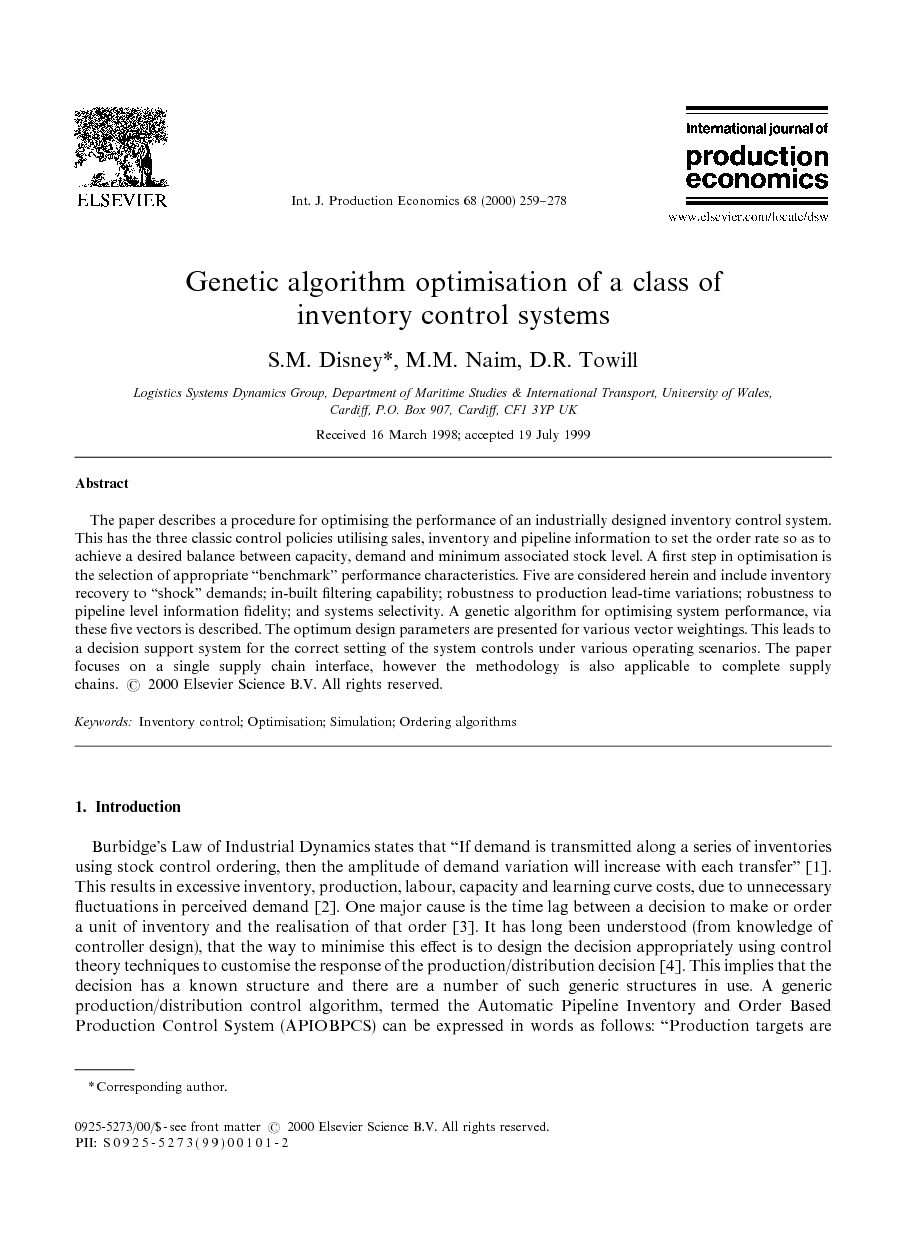 The paper describes a procedure for optimising the performance of an industrially designed inventory control system. This has the three classic control policies utilising sales, inventory and pipeline information to set the order rate so as to achieve a desired balance between capacity, demand and minimum associated stock level. A first step in optimisation is the selection of appropriate “benchmark” performance characteristics. Five are considered herein and include inventory recovery to “shock” demands; in-built filtering capability; robustness to production lead-time variations; robustness to pipeline level information fidelity; and systems selectivity. A genetic algorithm for optimising system performance, via these five vectors is described. The optimum design parameters are presented for various vector weightings. This leads to a decision support system for the correct setting of the system controls under various operating scenarios. The paper focuses on a single supply chain interface, however the methodology is also applicable to complete supply chains.

Burbidge's Law of Industrial Dynamics states that “If demand is transmitted along a series of inventories using stock control ordering, then the amplitude of demand variation will increase with each transfer” [1]. This results in excessive inventory, production, labour, capacity and learning curve costs, due to unnecessary fluctuations in perceived demand [2]. One major cause is the time lag between a decision to make or order a unit of inventory and the realisation of that order [3]. It has long been understood (from knowledge of controller design), that the way to minimise this effect is to design the decision appropriately using control theory techniques to customise the response of the production/distribution decision [4]. This implies that the decision has a known structure and there are a number of such generic structures in use. A generic production/distribution control algorithm, termed the Automatic Pipeline Inventory and Order Based Production Control System (APIOBPCS) can be expressed in words as follows: “Production targets are equal to demand averaged over Ta time units (the demand policy), plus a fraction, Ti, of the inventory deficit in stores (the inventory policy), plus a fraction, Tw, of the WIP deficit (the WIP policy)”. We usually express the model in continuous control form. However, the discrete version is also available, if preferred [5]. The model can also be expressed in block diagram form as shown in Fig. 1[6]. The block diagram describes, in a form suitable for building a simulation model, the controllers that are used to place production orders. It is also representative of Sterman's work [3], (where a simplified model of a beer production/distribution system was used to convince senior executives that they did not fully understand the concept of the supply chain, especially the effect of system structure on system behaviour). His heuristics can be directly related to the control parameters Ta, Tw and Ti, via mathematical manipulation [7]. It should also be noted that by appropriate selection of system parameters the model can cover a wide spectrum of supply philosophies ranging from make-to-stock to make-to-order.Within the block diagram we have approximated the production delay in the Laplace domain by using 1/(1+Tps/n)n, where n is either 1, for a first-order delay, or 3, for a third-order delay. Proof of this approximation is shown in [8]; and it is also the nth-order delay used in the DYNAMO/ STELLA/ iTHINK simulation packages [4]. It has been shown by various authors that these are good representation of real world production lead-time distributions, for example Wolstenholme [9]. The focus of this paper will be to show how the control parameters, Ti, Ta and Tw change as the balance between a situation's inventory carrying costs and production on-costs (capacity-related costs) alters. We will present a table of control parameters which reflect various weightings on inventory and on-costs. To do this we will make extensive use of some control theory techniques coupled with an optimisation procedure termed, Genetic Algorithms (GA). As an aid to the structure and usefulness of the DSS and to the content of this paper, Fig. 2 shows the inputs, outputs, assumptions and tools and techniques that are used to develop the DSS.

A generic production and distribution control system has been outlined. The role of each of the controllers has been demonstrated via the use of simulation. Five desirable characteristics of a production distribution system have been described and quantified by drawing on control techniques developed in the 1950s and 1960s for use in an optimisation procedure using a genetic algorithm. The contribution of this paper is to successfully combine classical control theory with modern optimisation techniques for an inventory control application. The first of the five desirable characteristics is inventory recovery which ensures that finished goods stock is kept to a minimum. The second, noise bandwidth, ensures that the production on-costs are kept to a minimum in response to random patterns of demand. Three more vectors ensure that the system is robust to uncertainties in lead times, information fidelity and user interaction. It is reassuring to note that the optimal nominally weighted parameters are very similar to previously stated optimum controller settings derived by more intuitive techniques [6]. The optimisation procedure was then used to determine how the controller parameters would alter with different cost structures within a production system. Considered was the weighting on inventory carrying costs and production on-costs or capacity costs reflected in each of the five performance vectors. The set of controller parameters determined for the range of cost structures available ensures that users have a range of solutions for their business situation, thus forming a DSS. The DSS shows that as capacity costs become more important to a business (i.e. in process-oriented companies), the use of WIP information becomes negligible in the ordering decision, as Tw becomes very large. However, where inventory costs are significant (i.e. in a batch/job shop oriented business) then WIP information has a considerable effect on the dynamic performance of the ordering system. Berry et al. [24] outlined similar results from an industrial survey of how WIP information is being used in practical situations. Their main conclusions show that companies with low and constant lead times (generally process type industries) were not collecting WIP information in their decision making and those that did (high, variable lead-time industries, i.e. jobshop type industries) could benefit most from the inclusion of such information in their order decision making, but were failing to incorporate them formally in the feedback structure of the decision. This contribution suggests, that in industries where it is easy to collect WIP information, there is little benefit in doing so. Conversely, where it is harder to collect WIP information there is considerable benefits to be obtained. This paper has demonstrated that the use of a DSS coupled with a simulation facility and genetic algorithm optimisation can improve the performance of a production or distribution control system by fully understanding the trade-off between inventory levels and factory orders. Of course these benefits are even greater over many echelons in the supply chain as the effects of poor decision making are multiplicative [25]. For example, simulation has shown that over a three-level supply chain there is the potential for a 20-fold improvement in dynamic performance in a three-level supply chain, for the nominal case, over and above the “MRP equivalent” controller settings of Tw=∞,Ti=1 and Ta=0 [2].