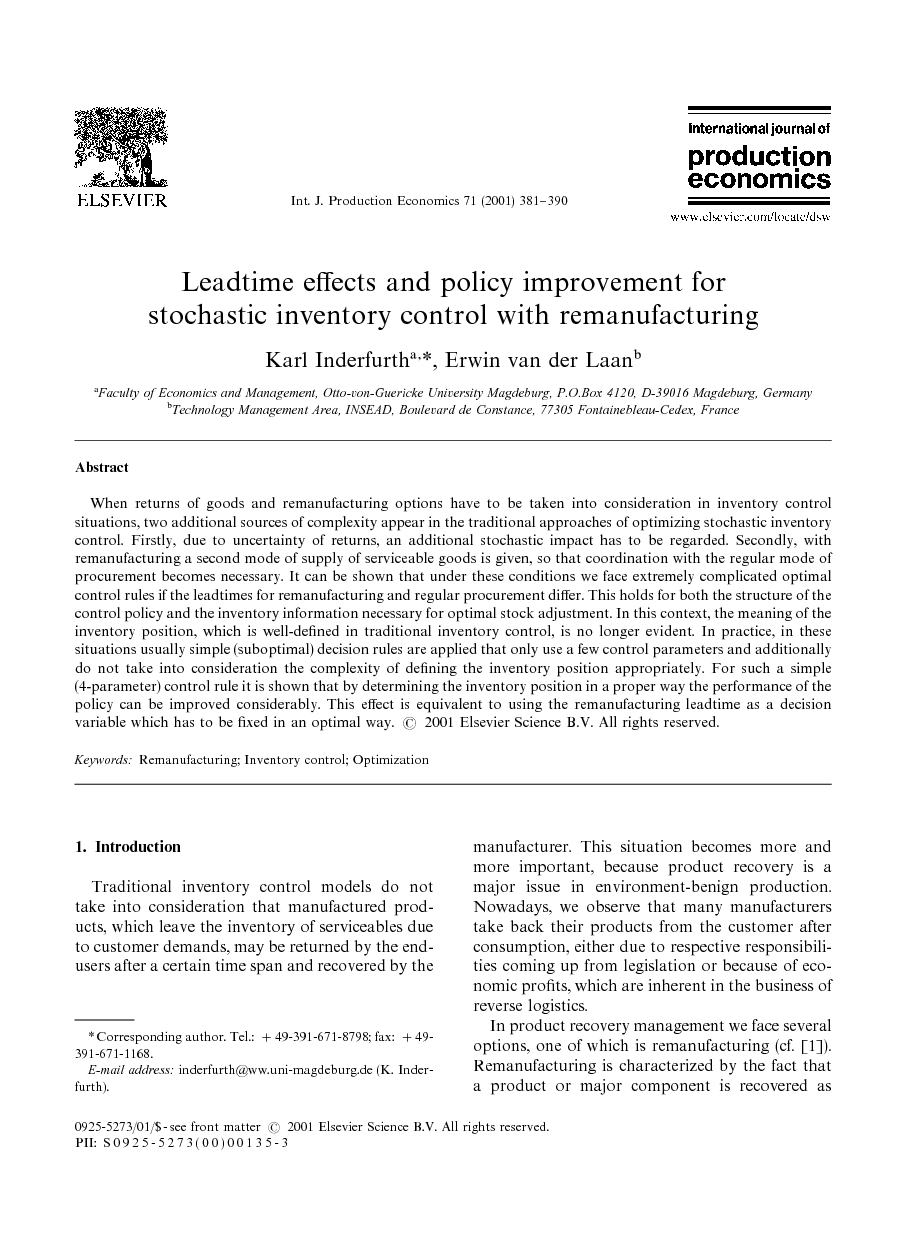 When returns of goods and remanufacturing options have to be taken into consideration in inventory control situations, two additional sources of complexity appear in the traditional approaches of optimizing stochastic inventory control. Firstly, due to uncertainty of returns, an additional stochastic impact has to be regarded. Secondly, with remanufacturing a second mode of supply of serviceable goods is given, so that coordination with the regular mode of procurement becomes necessary. It can be shown that under these conditions we face extremely complicated optimal control rules if the leadtimes for remanufacturing and regular procurement differ. This holds for both the structure of the control policy and the inventory information necessary for optimal stock adjustment. In this context, the meaning of the inventory position, which is well-defined in traditional inventory control, is no longer evident. In practice, in these situations usually simple (suboptimal) decision rules are applied that only use a few control parameters and additionally do not take into consideration the complexity of defining the inventory position appropriately. For such a simple (4-parameter) control rule it is shown that by determining the inventory position in a proper way the performance of the policy can be improved considerably. This effect is equivalent to using the remanufacturing leadtime as a decision variable which has to be fixed in an optimal way.

Traditional inventory control models do not take into consideration that manufactured products, which leave the inventory of serviceables due to customer demands, may be returned by the end-users after a certain time span and recovered by the manufacturer. This situation becomes more and more important, because product recovery is a major issue in environment-benign production. Nowadays, we observe that many manufacturers take back their products from the customer after consumption, either due to respective responsibilities coming up from legislation or because of economic profits, which are inherent in the business of reverse logistics. In product recovery management we face several options, one of which is remanufacturing (cf. [1]). Remanufacturing is characterized by the fact that a product or major component is recovered as a whole and that its quality after recovery is just as good as that of a new one. The latter effect is also what makes remanufacturing different from repair. Additionally, repair problems are specific in the sense that a one-to-one relation between return and demand of an item is given. When returns of goods and remanufacturing options have to be taken into consideration in inventory control situations, two additional sources of complexity appear in the traditional approaches of optimizing stochastic inventory control. First, due to uncertainty of returns an additional stochastic impact has to be regarded. Second, with remanufacturing a second mode of supply of serviceable goods is given so that coordination with the regular mode of procurement becomes necessary. Fleischmann et al. [2] presents a general overview of quantitative approaches for production planning and inventory control in reverse logistics. With respect to stochastic inventory control problems with remanufacturing, two streams of contributions can be found in the literature. On the one hand, starting with the work of Heymann [3] and Muckstadt and Isaac [4] and recently extended by Van der Laan et al. [5], Van der Laan and Salomon [6] and Van der Laan [7] we find approaches which are based on continuous-review models. With these models the parameters of predetermined reasonable (but usually not optimal) control policies are optimized using results from queuing theory. On the other hand, periodic-review models have been developed beginning with Whisler [8] and Simpson [9], and recently extended by Inderfurth [10] and Inderfurth et al. [11]. These models concentrate on investigating the structure of the optimal control rule using a dynamic programming (DP) approach, and are less devoted to the issue of parameter optimization. Up to now both streams in literature have been developed separately, and the potential of their combined application has not been examined. For instance, the periodic-review approach could be used to give insight in the structure of optimal, or near-optimal, control policies and make suggestions for reasonable simplifications, while the parameters of simplified control rules could be determined by continuous-review models. Another fruitful field of joint application could be the analysis and optimization of the information structure of prespecified simple control policies from a theoretical point of view. This latter issue, which is of significant relevance because generally only simply structured policies without proper theoretical justification are used in practice, will be addressed in this paper. We regard a simple four-parameter control rule for an inventory model with remanufacturing that easily can be used in practice in the specified version or in similar variants. When using this policy it turns out that counter-intuitive leadtime effects show up that can be exploited to improve the performance of the policy by treating the remanufacturing leadtime as a decision variable. A theoretical analysis shows that this effect has to do with the specifics of the optimal information structure and with the fact that a proper definition of the inventory position is non-trivial if manufacturing and remanufacturing leadtimes deviate. The paper is organized as follows. In Section 2, the model and control rule under consideration is introduced, and the paradoxical leadtime effects computed from a continuous-review model are presented. Section 3 gives a comprehensive analysis of the information and policy structure of the optimal control rule by using a periodic-review DP approach. Futhermore, it clarifies the relationship of leadtimes and the inventory position. In Section 4, it is shown how the regarded policy can be improved by appropriately using the remanufacturing leadtime as a decision variable. Conclusions and topics for further research are presented in Section 5.

Considering remanufacturing as an additional mode of supply of serviceable products, one faces extremely complicated optimal control rules if the leadtimes for remanufacturing and regular procurement differ. It was shown that both the structure of the control policy and the inventory information necessary for optimal stock adjustment differs from traditional inventory control and is no longer evident. In this paper we have shown that by determining the inventory position in an appropriate way, the performance of simple policies can be improved considerably. This effect is obtained by using the remanufacturing leadtime as a decision variable, rather than a fixed exogenous constant. By varying this leadtime, i.e. by changing the definition of the inventory position, system cost can be influenced. Thus, there exists an opportunity to set the remanufacturing leadtime in an optimal way.