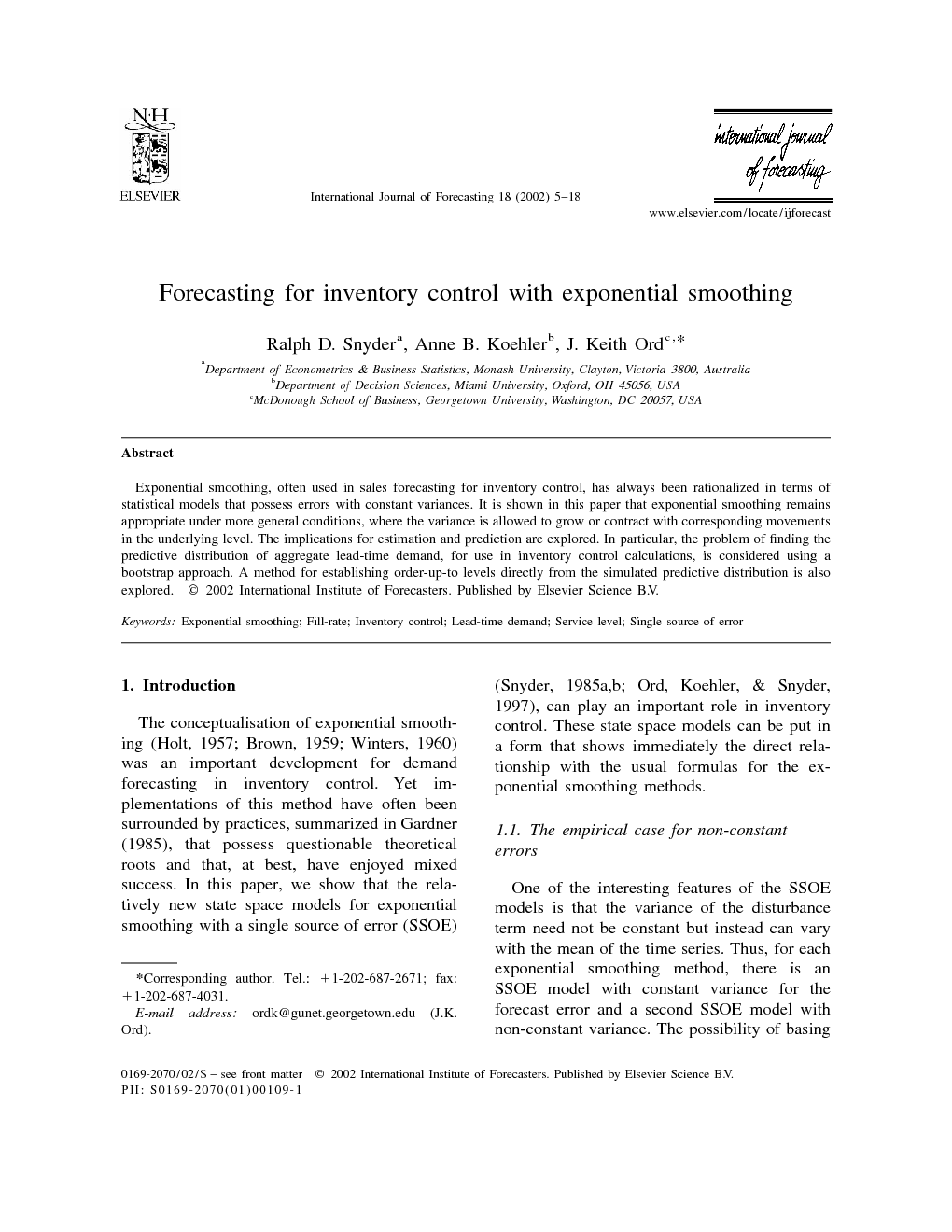 Exponential smoothing, often used in sales forecasting for inventory control, has always been rationalized in terms of statistical models that possess errors with constant variances. It is shown in this paper that exponential smoothing remains appropriate under more general conditions, where the variance is allowed to grow or contract with corresponding movements in the underlying level. The implications for estimation and prediction are explored. In particular, the problem of finding the predictive distribution of aggregate lead-time demand, for use in inventory control calculations, is considered using a bootstrap approach. A method for establishing order-up-to levels directly from the simulated predictive distribution is also explored.

The conceptualisation of exponential smoothing (Holt, 1957, Brown, 1959 and Winters, 1960) was an important development for demand forecasting in inventory control. Yet implementations of this method have often been surrounded by practices, summarized in Gardner (1985), that possess questionable theoretical roots and that, at best, have enjoyed mixed success. In this paper, we show that the relatively new state space models for exponential smoothing with a single source of error (SSOE) (Snyder, 1985a, Snyder, 1985b and Ord et al., 1997), can play an important role in inventory control. These state space models can be put in a form that shows immediately the direct relationship with the usual formulas for the exponential smoothing methods. 1.1. The empirical case for non-constant errors One of the interesting features of the SSOE models is that the variance of the disturbance term need not be constant but instead can vary with the mean of the time series. Thus, for each exponential smoothing method, there is an SSOE model with constant variance for the forecast error and a second SSOE model with non-constant variance. The possibility of basing a theory of forecasting and inventory control on such non-constant errors has a certain attraction. Over 40 years ago Brown (1959, p. 94) said, ‘you will be very likely to find that the standard deviation of demand is nearly proportional to the total annual usage, or to the average monthly usage’. When describing models of the demand process, other authors on inventory control have also allowed the variation in the forecast error to depend on the size of the forecast and have pointed to Brown’s statement (Miller, 1986, Lovejoy, 1990 and Heath & Jackson, 1994). We now present some empirical results that suggest that the standard deviation may, indeed, be proportional to the mean rather than constant. Our data1 are the weekly sales figures for weeks 5–51 of 1998 for 345 jewelry lines sold by The Monet Group. Since the period from Thanksgiving to Christmas is known for its high sales volume, we partitioned the data into weeks 5–46 and 47–51. We then computed the mean and standard deviation for each product within each period; the results are plotted in Fig. 1 and Fig. 2. The plots clearly suggest that the standard deviation is proportional to the mean, rather than constant.1.2. Models for exponential smoothing Models, as opposed to methods, for forecasting the demand process, are important in the development of policies for inventory control. In particular, a model enables us to specify the predictive distribution for future demand so that inventory policies may be derived in accordance with some criterion such as expected cost minimization. Further, the advantages of the SSOE models over other suggested models for inventory control include: 1. the use of logarithms can be avoided when the variance is nonstationary; 2. the most common types of trend and seasonality can be modelled; 3.since the level, trend, and seasonal components are explicit, the models are simple to understand; and 4. users of exponential smoothing can easily be shown the relationship of these methods to the models. We will illustrate the use of models in two settings: determining the distribution of total lead-time demand and choosing an order level for a specified fill rate. Although it is possible to derive analytical variance expressions, we focus on the use of a parametric bootstrap procedure. A parametric bootstrap simulation avoids the complex analytical formulas when trend and seasonal patterns are present and avoids the approximations that are required in the case of non-constant error variance. We would expect the bootstrap to be most useful when the underlying demand distribution is markedly non-normal and the lead time is relatively short. In these circumstances, the central limit theorem is unlikely to apply, so that approximations based on the normal law will be inaccurate. We also note that, in this paper, we have taken lead time to be constant. However, an additional benefit of the bootstrap approach is that it is readily extended to cover stochastic lead times. While a parametric bootstrap procedure is computer intensive, it is quite viable on modern computing machines, even for tens of thousands of inventory items. Evidence that bootstrapping can work in practice is provided by Fricker and Goodhardt (2000). They use a nonparametric bootstrap methodology to set reorder points for 10 to 20 thousand different types of items. In their application, both the mean and the variance of the time series are assumed to be constant. In contrast, we will provide models that allow both to change. Many expositions of exponential smoothing are related back to associated ARIMA models (Box, Jenkins, & Reinsel, 1994). Such an association assumes that the variance of the forecast error is constant. It is also implicitly assumed in such expositions that the processes under consideration extend back into the infinite past. An SKU (stock keeping unit) typically possesses a finite life cycle so that this semi-infinite time assumption is unrealistic. Therefore, the seed states are treated as parameters rather than as diffuse random variables. The situation n periods later is considered. The decision maker has n observations of demand y1,…, yn available and must bring them to bear in the ordering decision. When there is a delivery lead-time of h periods, the problem confronting the decision maker is to use the order placed at the beginning of period n+1 to influence stock levels in the period (n+h, n+h+1). Knowledge of the distribution of total demand over the lead-times (n+1, n+h) and (n+1, n+h+1) is required. 1.3. Outline of the paper In Section 2, two types of SSOE models that underlie the exponential smoothing methods are introduced. The distinction between them is in the assumed form of the disturbance terms, the possibilities being so-called absolute and relative error cases. The error correction form of exponential smoothing is derived for both types of models, and maximum likelihood estimation procedures for parameter estimation are outlined. In 3 and 4, we demonstrate how to use the models to determine the lead-time demand distribution and the order level using the fill rate. In Section 5, we present a simulation study to contrast the performance of the absolute and relative error models.

The importance of SSOE demand models for inventory control has been examined. A significant feature of the SSOE models is that one can see that an assumption of constant variance (an assumption of the absolute error models and ARIMA models) is not necessary for exponential smoothing methods. Using the SSOE models, a bootstrap method for determining the total lead-time demand distribution was described. The results indicate that the differences between the absolute and relative error forms of the local level model are modest, unless shifts in the level are quite pronounced. However, when trend is present in the data, it was shown that the choice of the error structure becomes more important. Methods to distinguish between the absolute and relative error form of the models can be adapted from the methods for seasonal models in Koehler et al. (2001). A bootstrap method for establishing order levels with a target fill-rate (customer service level) was developed; its effectiveness was demonstrated by a simulation study. This study also confirmed that choosing the correct form for the error terms may be important when trend is present in the data. When reviewing inventory policies in the light of major level shifts, the relative error model may often be more realistic, since its standard deviation is proportional to the level of the process. The lack of more significant differences when the wrong form for the error terms is chosen may be caused by the fill rates favoring the center of the distribution where differences in variances have less impact. In summary, SSOE models for exponential smoothing provide us with intuitive models for exponential smoothing that can be used to improve the practice of inventory control.