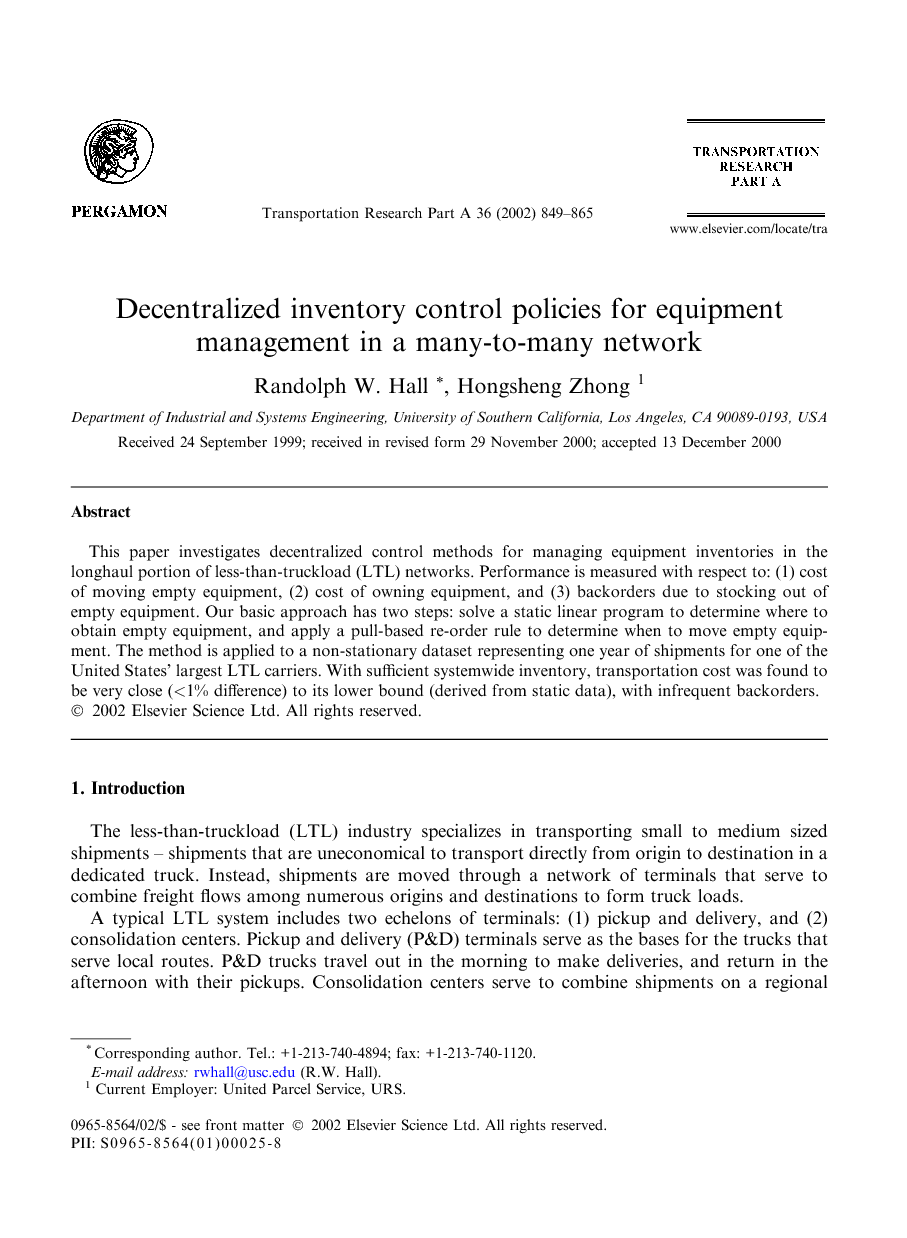 This paper investigates decentralized control methods for managing equipment inventories in the longhaul portion of less-than-truckload (LTL) networks. Performance is measured with respect to: (1) cost of moving empty equipment, (2) cost of owning equipment, and (3) backorders due to stocking out of empty equipment. Our basic approach has two steps: solve a static linear program to determine where to obtain empty equipment, and apply a pull-based re-order rule to determine when to move empty equipment. The method is applied to a non-stationary dataset representing one year of shipments for one of the United States' largest LTL carriers. With sufficient systemwide inventory, transportation cost was found to be very close (<1% difference) to its lower bound (derived from static data), with infrequent backorders.

The less-than-truckload (LTL) industry specializes in transporting small to medium sized shipments – shipments that are uneconomical to transport directly from origin to destination in a dedicated truck. Instead, shipments are moved through a network of terminals that serve to combine freight flows among numerous origins and destinations to form truck loads. A typical LTL system includes two echelons of terminals: (1) pickup and delivery, and (2) consolidation centers. Pickup and delivery (P&D) terminals serve as the bases for the trucks that serve local routes. P&D trucks travel out in the morning to make deliveries, and return in the afternoon with their pickups. Consolidation centers serve to combine shipments on a regional basis, and serve multiple P&D terminals. Longhaul trucks travel between these centers, and between consolidation centers and P&D terminals, to transport shipments over longer distances. One of the important issues in managing the longhaul portion of the LTL network is balancing the flow of containers and trailers through movement of empty equipment. Numerous optimization methods have been developed, most of which utilize linear programming. The famous transportation method of linear programming was developed to optimize a static version of the empty equipment problem (Koopmans, 1949). Later, linear programming was used to optimize dynamic flows, in which demand is specified by period (White and Bomberault, 1969; Herren, 1973; Misra, 1972). More recently, stochastic programming methods have been used to optimize flows, accounting for uncertainty in future demand and travel time (Beaujon and Turnquist, 1991; Jordan and Turnquist, 1983; Powell, 1986 and Powell, 1987; Crainic et al., 1993; Carvalho, 1996). Our work is most similar to the inventory theoretic models in Philip and Sussman (1977), Mendiratta and Turnquist (1982) and Du and Hall (1997). In Du and Hall, inventory state equations are developed for a hub terminal and its satellites. Policies are created for requesting and releasing inventories of equipment so as to achieve desired service levels. The current work extends the approach to more general networks, which do not have a hub-and-spoke structure. Philip and Sussman (1977) and Mendiratta and Turnquist (1982) are also similar in that their methodology relies on a static linear program solution as input to the control process. However, our control method is different from the prior work, and we compare a broad range of alternatives. Surveys of empty equipment routing methods can be found in Crainic (1999) and Dejax and Crainic (1987). From an operational perspective, the mathematical programming approaches that exist in the literature present several deployment challenges. Most importantly they require reasonably accurate forecasts of demand and travel time by period. They also force decisions to be periodic, when in reality equipment routing decisions can be made continuously. Lastly, the most accurate methods, which provide stochastic modeling, are computationally intensive. From an implementation standpoint, there can also be challenges in gathering information and making decisions in a central location. A local decision-maker may, for instance, have better information on the status of equipment on-site than would be available in a centralized database (perhaps because the data are never entered in the database or because information is in part qualitative). These factors run against the culture and capabilities of some trucking companies, making mathematical programming methods difficult to implement. The purpose of our research is to investigate whether relatively simple control methods that can be implemented on a decentralized basis (or centrally, if a company prefers) can be effective at managing equipment inventories in the longhaul portion of LTL networks. Underlying the method is the concept that all empty shipments are initiated by the receiving terminal based on the current state of its equipment inventory. We also represent a system that is decentralized in the sense that terminals do not share information with each other – the only communication occurs when empty equipment is requested. The system operates under a pull concept, which has been shown in production contexts to be highly effective in stochastic environments. We measure performance with respect to three measures: (1) cost of moving empty equipment, (2) cost of owning equipment, and (3) backorders due to stocking out of empty equipment. Our basic approach has two steps: solve a static linear program to determine where to obtain empty equipment, then apply a pull-based re-order rule to determine when to move empty equipment. The method is applied to a dataset representing one year of shipments for one of the United States' largest LTL carriers. The remainder of this paper is divided into five sections. First, we describe the basic policy to control the movement of empty equipment. Second, equations are developed for calculating control points. Third, experimental design is provided for evaluation of the control policy. Fourth, experimental results are given. The paper ends with conclusions and ideas for future research. Though our research is directed at LTL applications, the methodology can be used to balancing the flow of equipment between terminals within any distributed transportation network. Therefore, it is written in a manner to generalize results.

Extensions to the work are underway. We have examined scenarios with random travel time and continuous review policies. We also expect that small modifications to the policy can improve performance. For instance, a terminal might only order from a secondary source when its cost does not exceed the minimum by more than some threshold amount, or when its travel time falls below some threshold. Other possible variations include setting re-order points dynamically (as a function of non-stationary demand patterns), incorporating reduced costs in the allocation of limited equipment from a sending terminal and extending the model to multiple types of equipment and crew allocation decisions. Compared to dynamic linear programs, the decentralized control policy has a number of desirable attributes. It requires very little data, only periodic execution of simple static linear programs and only limited communication (a phone call to place orders is sufficient), and the policy can be implemented on decentralized basis (it could also be implemented from a central location, if a carrier preferred). And even though our analysis was based on periodic review with discretized travel time, nothing prevents the control policy from being executed continuously. There is no need to project demand on a daily basis, or any other time period for that matter. Finally, the policy seems to perform well, even when applied to non-stationary data. Although the analysis is based on a single dataset, because the dataset is quite realistic, the results are encouraging. In future research it is important to compare results of decentralized methods against centralized/dynamic models, with demand forecasts of differing accuracy. It is certainly the case that traditional optimization models can outperform the decentralized method if: forecasts are 100% accurate, demand occurs at discrete time points, and travel time is an integer multiple of period length. The relative performance is unclear when these assumptions are relaxed. There are certainly cases in the production/inventory literature where simple decentralized rules can perform well under a robust set of conditions, and the same may be true in fleet management.