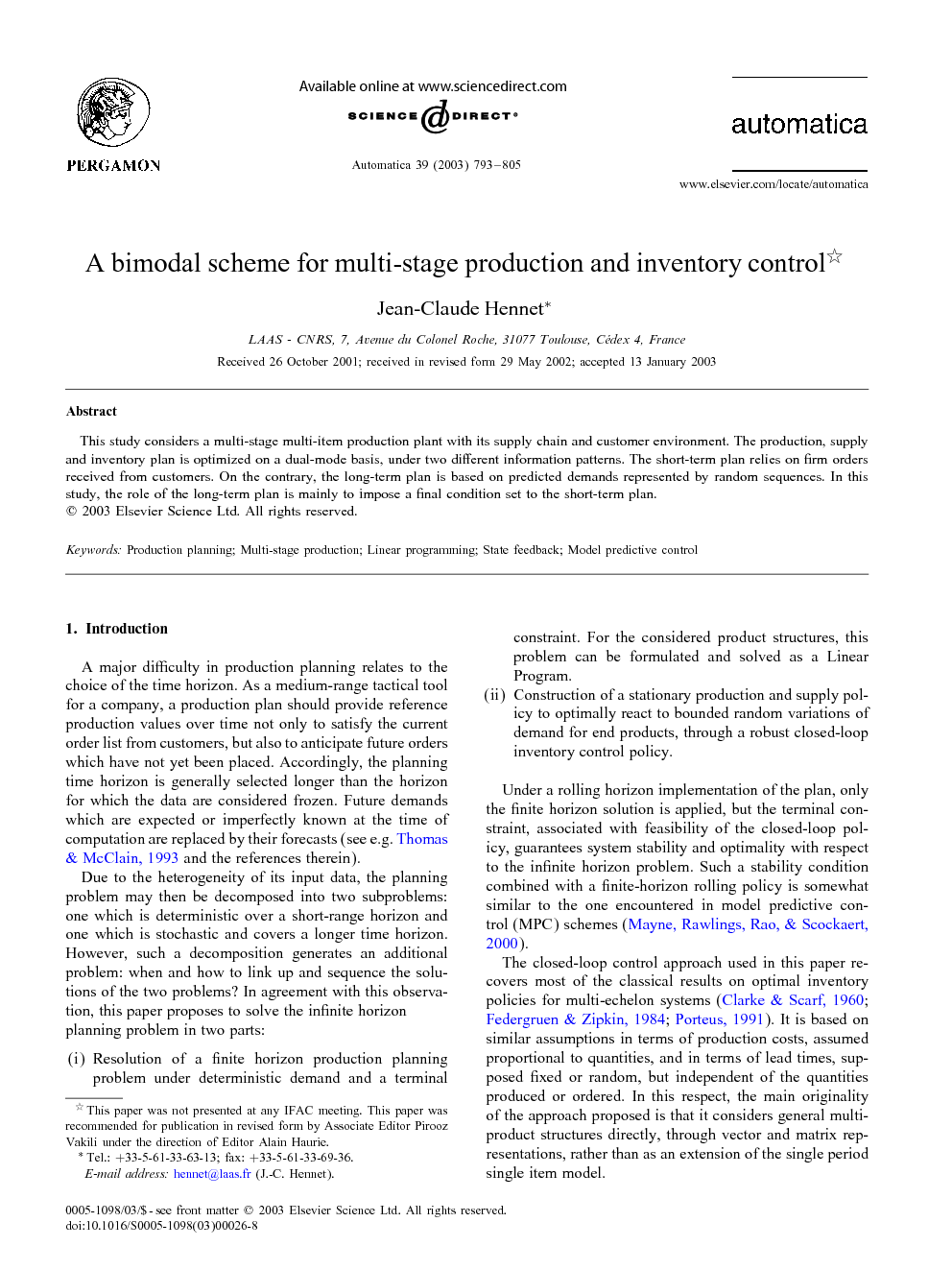 This study considers a multi-stage multi-item production plant with its supply chain and customer environment. The production, supply and inventory plan is optimized on a dual-mode basis, under two different information patterns. The short-term plan relies on firm orders received from customers. On the contrary, the long-term plan is based on predicted demands represented by random sequences. In this study, the role of the long-term plan is mainly to impose a final condition set to the short-term plan.

A major difficulty in production planning relates to the choice of the time horizon. As a medium-range tactical tool for a company, a production plan should provide reference production values over time not only to satisfy the current order list from customers, but also to anticipate future orders which have not yet been placed. Accordingly, the planning time horizon is generally selected longer than the horizon for which the data are considered frozen. Future demands which are expected or imperfectly known at the time of computation are replaced by their forecasts (see e.g. Thomas & McClain, 1993 and the references therein). Due to the heterogeneity of its input data, the planning problem may then be decomposed into two subproblems: one which is deterministic over a short-range horizon and one which is stochastic and covers a longer time horizon. However, such a decomposition generates an additional problem: when and how to link up and sequence the solutions of the two problems? In agreement with this observation, this paper proposes to solve the infinite horizon planning problem in two parts: (i)Resolution of a finite horizon production planning problem under deterministic demand and a terminal constraint. For the considered product structures, this problem can be formulated and solved as a Linear Program. (ii)Construction of a stationary production and supply policy to optimally react to bounded random variations of demand for end products, through a robust closed-loop inventory control policy. Under a rolling horizon implementation of the plan, only the finite horizon solution is applied, but the terminal constraint, associated with feasibility of the closed-loop policy, guarantees system stability and optimality with respect to the infinite horizon problem. Such a stability condition combined with a finite-horizon rolling policy is somewhat similar to the one encountered in model predictive control (MPC) schemes (Mayne, Rawlings, Rao, & Scockaert, 2000). The closed-loop control approach used in this paper recovers most of the classical results on optimal inventory policies for multi-echelon systems (Clarke & Scarf, 1960; Federgruen & Zipkin, 1984; Porteus, 1991). It is based on similar assumptions in terms of production costs, assumed proportional to quantities, and in terms of lead times, supposed fixed or random, but independent of the quantities produced or ordered. In this respect, the main originality of the approach proposed is that it considers general multiproduct structures directly, through vector and matrix representations, rather than as an extension of the single period single item model. The remainder of the paper is organized as follows. Section 2 presents the equations and constraints defining the model. Then, Section 3 describes the optimization problem and focuses on the resolution of the infinite horizon planning problem. It is proposed to construct an invariant domain in which the system trajectory can be maintained under any admissible demand vector trajectory. This invariant domain is then used as a target domain in the short-range planning problem studied in Section 4. Section 5 presents an example to illustrate the approach, and the final section contains some concluding remarks.

In this study, a typical production planning problem has been analyzed and solved using a control oriented approach. It has been shown that, for this problem, the classical limitations of the application of control theory to large-scale systems subject to many constraints can be overcome through the use of the positive invariance approach for polyhedral sets. The planning problem has been decomposed in time into a short-term deterministic problem and a long-term stochastic problem. The latter problem has been treated as a constrained disturbance attenuation problem around a regime with bounded random variations around a constant set point, matching the forecast demand pattern. A solution to this problem has been found by combining the advantages of model predictive control and positive invariance. It takes the form of a linear state feedback control law, with base stock levels and equilibrium production levels as state and control set points. The domain of application of this control law is positively invariant. It has been chosen as the target domain for the short-range production plan. If the target domain can be reached within the time horizon over which the model is deterministic, then the main role of the short-range production plan is to transfer at minimal cost the current state of the system to the domain of feasibility of the closed-loop regime. This problem can be solved efficiently by adding terminal conditions to the classical LP formulation of the production planning problem under deterministic demands and capacity constraints. Depending on the considered manufacturing system and on the market in which it operates, different uses of the proposed methodology can be considered. The two stages of the control scheme may be implemented when a stationary constant average demand pattern is expected for the future. If this is not the case, particularly if the market is subject to important trends, uncertainties and/or fluctuations, a rolling (or receding) horizon production policy may be implemented, due to its ability to react to external changes. Nevertheless, the proposed methodology can still be useful in this context. It is believed that the effectiveness of the short-range production plan and the consistency of the whole production policy of the firm is improved by the computation of a target domain and its integration as a final condition in the short-range planning problem.