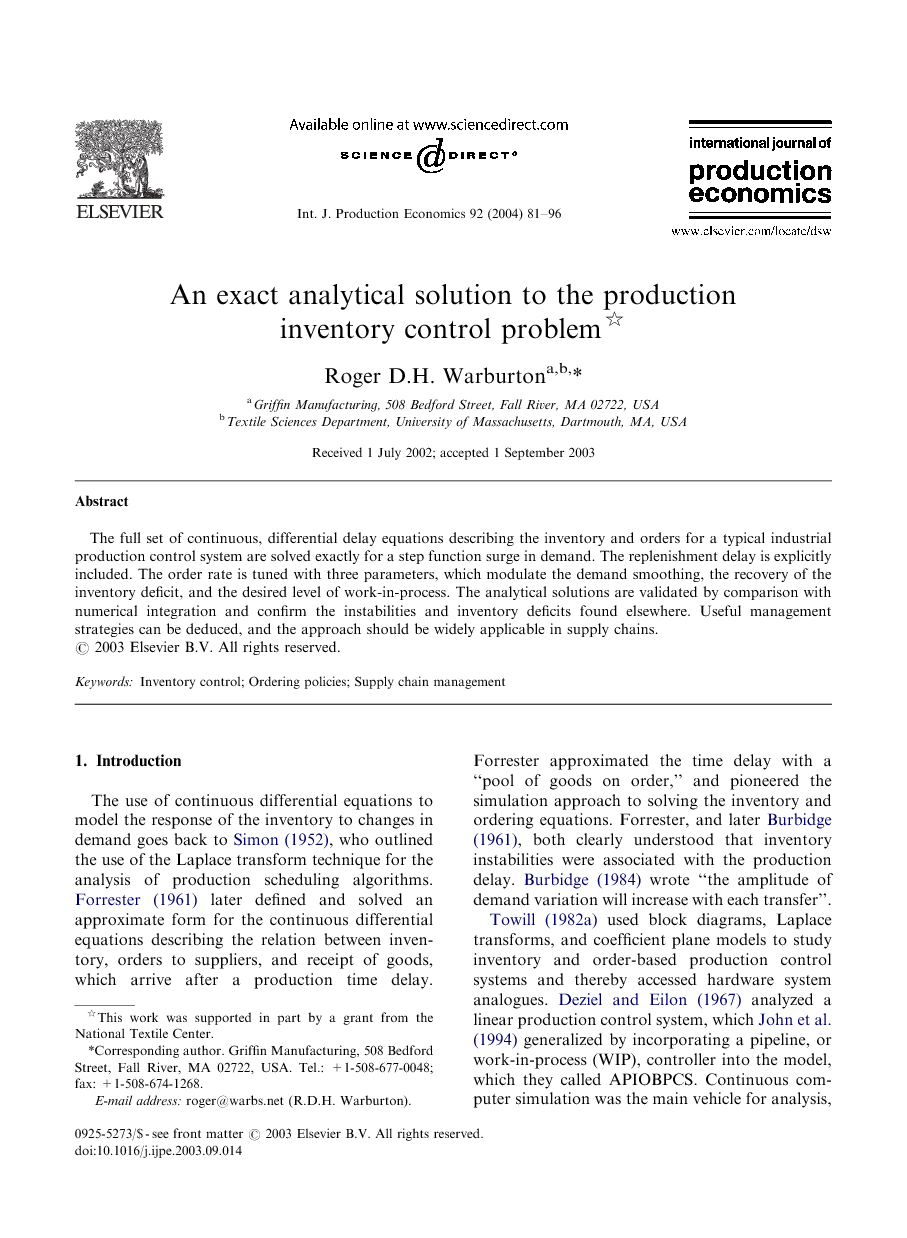 The full set of continuous, differential delay equations describing the inventory and orders for a typical industrial production control system are solved exactly for a step function surge in demand. The replenishment delay is explicitly included. The order rate is tuned with three parameters, which modulate the demand smoothing, the recovery of the inventory deficit, and the desired level of work-in-process. The analytical solutions are validated by comparison with numerical integration and confirm the instabilities and inventory deficits found elsewhere. Useful management strategies can be deduced, and the approach should be widely applicable in supply chains.

The use of continuous differential equations to model the response of the inventory to changes in demand goes back to Simon (1952), who outlined the use of the Laplace transform technique for the analysis of production scheduling algorithms. Forrester (1961) later defined and solved an approximate form for the continuous differential equations describing the relation between inventory, orders to suppliers, and receipt of goods, which arrive after a production time delay. Forrester approximated the time delay with a “pool of goods on order,” and pioneered the simulation approach to solving the inventory and ordering equations. Forrester, and later Burbidge (1961), both clearly understood that inventory instabilities were associated with the production delay. Burbidge (1984) wrote “the amplitude of demand variation will increase with each transfer”. Towill (1982a) used block diagrams, Laplace transforms, and coefficient plane models to study inventory and order-based production control systems and thereby accessed hardware system analogues. Deziel and Eilon (1967) analyzed a linear production control system, which John et al. (1994) generalized by incorporating a pipeline, or work-in-process (WIP), controller into the model, which they called APIOBPCS. Continuous computer simulation was the main vehicle for analysis, backed up by mathematical control techniques such as transfer functions, and initial and final value theorems. They concluded that the inventory will suffer a final value offset “in the opposite direction to the change in market consumption.” Analytical cross-checks of the numerical simulation were performed using the Inverse Laplace transform for a small number of cases to ease the burden of calculations. In this paper, the same order-up-to (OUT) policy will be studied by solving the equations exactly for the case of a pure time delay. Riddalls and Bennett (2002) studied the stability properties of a continuous model quite similar to John et al., using simple demand averaging in place of exponential demand smoothing. Without explicitly solving the differential equations, global stability theorems were employed to determine the dependence of the critical stability point on the time delay. The discrete time approach evolved in parallel with continuous techniques. Vassian (1955) quickly replicated the work of Simon, employing discrete time difference equations and employing the z-transform instead of the Laplace transform. Grubbström (1998) has applied the discrete z-transform and Net Present Value techniques to MRP systems. The availability of modern simulation packages has led to significant refinements in both the continuous and discrete domains (Disney et al., 1997; Towill, 1982b). Inventory and ordering policies have been extensively studied using linear control theory (Towill and Del Vecchio, 1994). Popplewell and Bonney (1987) studied an MRP system using the discrete z-transform, while Disney and Towill (2002) determined the stability of a vendor managed inventory supply chain using a discrete transfer function model. Inventory management has benefited from comparison with real-world data (Disney and Towill, 2002; Clark, 1994; Kelly, 1995; Fransoo and Wouters, 2000; Holmstrom, 1997), and critical management analyses (Towill, 1997). Sterman (1989) used a simplified beer production and distribution model to establish that senior executives poorly understood the significance of the pipeline delay. In particular, Sterman suggests that ignoring pipeline WIP results in instability, and that one should compensate for the difference between desired and actual goods in the pipeline. Sterman's heuristics have been shown to be directly related to the parameters used in this paper (John et al., 1994; Disney et al., 2000). Considerable recent attention has focused on the “Bullwhip Effect,” a term coined by Proctor and Gamble and popularized by Lee et al. (1997a), Lee et al. (1997b) and Lee et al. (2000). From a practical, management perspective, several industrial applications have been reported (Gill and Abend, 1997; Stalk and Haut, 1990). The theoretical analysis of Lee et al. assumed a serially correlated demand originally proposed by Kahn (1987), and proceeded from an inventory cost minimization function. Dejonckheere et al. (2003) investigated the Bullwhip Effect in OUT models using the discrete z-transform. The impact of exponential smoothing on the Bullwhip Effect has been considered (Chen et al., 2000). Dynamic programming techniques applied to stock minimization have also been used to quantify the Bullwhip Effect (Metters, 1997). The availability of an exact solution to the continuous differential inventory equations seems to have been overlooked. For example, when discussing equations with time delays, none of the textbooks on differential equations (Bellman and Cooke, 1963) or Laplace transforms point out that such equations can be solved exactly in terms of the Lambert W function (Corless et al., 1996). This paper begins to address this omission. The aim is to solve exactly the equations for a model that has been shown to be practically valuable, and that has been studied in some detail. Only from analytical solutions can the precise behavior of a model be carefully assessed over a wide range of conditions. This contributes valuable conceptual information to managers and expert system developers, who depend on behavioral heuristics. Towill insists that the use of simulation techniques without a sound underlying theoretical basis can be hazardous (Disney et al., 2000). Therefore, a goal of this paper is to provide tools that help guide the exploration of the parameter space with numerical techniques. Since numerical treatments of unstable solutions require more care, such approaches should benefit from the predictable stability properties of our exact solutions. We shall demonstrate precisely which combinations of parameters allow stable solutions. Finally, the analytical solutions will be shown to predict properties found in other theoretical analyses. For example, the long-term inventory of deficits (John et al., 1994) will emerge from our solutions. This validates the analytical solutions, and demonstrates the equivalence of the differential equation and control theory approaches—a powerful confirmation of the correctness of both theories.

In this paper, we demonstrated that the equations describing the time dependence of the inventory and order rate of a typical industrial inventory control system can be solved exactly. The full set of continuous equations, including the time delay, was solved for the case of a step function surge in demand at retail. However, the technique is quite general and applicable to all echelons of the supply chain. The unstable behavior associated with the inventory arises from the time delay term in the inventory equation, which generates a complex Lambert W function in an exponential. This can result in diverging inventory oscillations. The instability associated with industrial inventory control systems can therefore be understood and characterized by the properties of the Lambert W function. The argument of the Lambert W function depends on the fulfillment delay, and coupled with its appearance in an exponential explains why the inventory oscillations depend so sensitively on the fulfillment delay. However, selecting appropriate values for the order rate parameters, particularly the WIP recovery rate, can diminish the inventory oscillations. Further, fine tuning the ordering policy can guarantee that the inventory will return exponentially fast to the desired level, while not generating an overshoot. The availability of analytical solutions makes the computation of the desirable response quite straightforward. The order rate was determined by the fulfillment time τ, which is a constant and not easily changeable in industrial situations. However, three tunable parameters can be used to control the inventory response to changes in demand. The three parameters, Ta, Ti, and Tw control the rate of the inventory deficit recovery, the average exponential smoothing time for the demand, and the quantity of WIP. The analytical solutions clarify the precise contribution of each parameter, and illuminate the nature of the inventory response to different ordering policies. All of the solutions presented in this paper are exact and deterministic. Somewhat surprisingly, interesting, real-world models are mathematically tractable, and so the general approach should prove useful in a variety of supply chain analyses. These exact analytical solutions should prove valuable as test cases for validating numerical experiments and suggesting domains in the parameter space to explore through simulation. The analytical solutions were directly validated by comparison with numerical integrations, establishing the correctness of the solutions (see Appendix A). The theoretical solutions in the stable regime predict permanent inventory deficits, confirming a result from control theory (John et al., 1994). The properties of the Lambert W function determine the stability properties of the inventory response, predictions also confirmed by control theory analyses (Disney et al., 2000). The equivalence of the differential equation and control theory approaches is a powerful confirmation of the correctness of both theories.