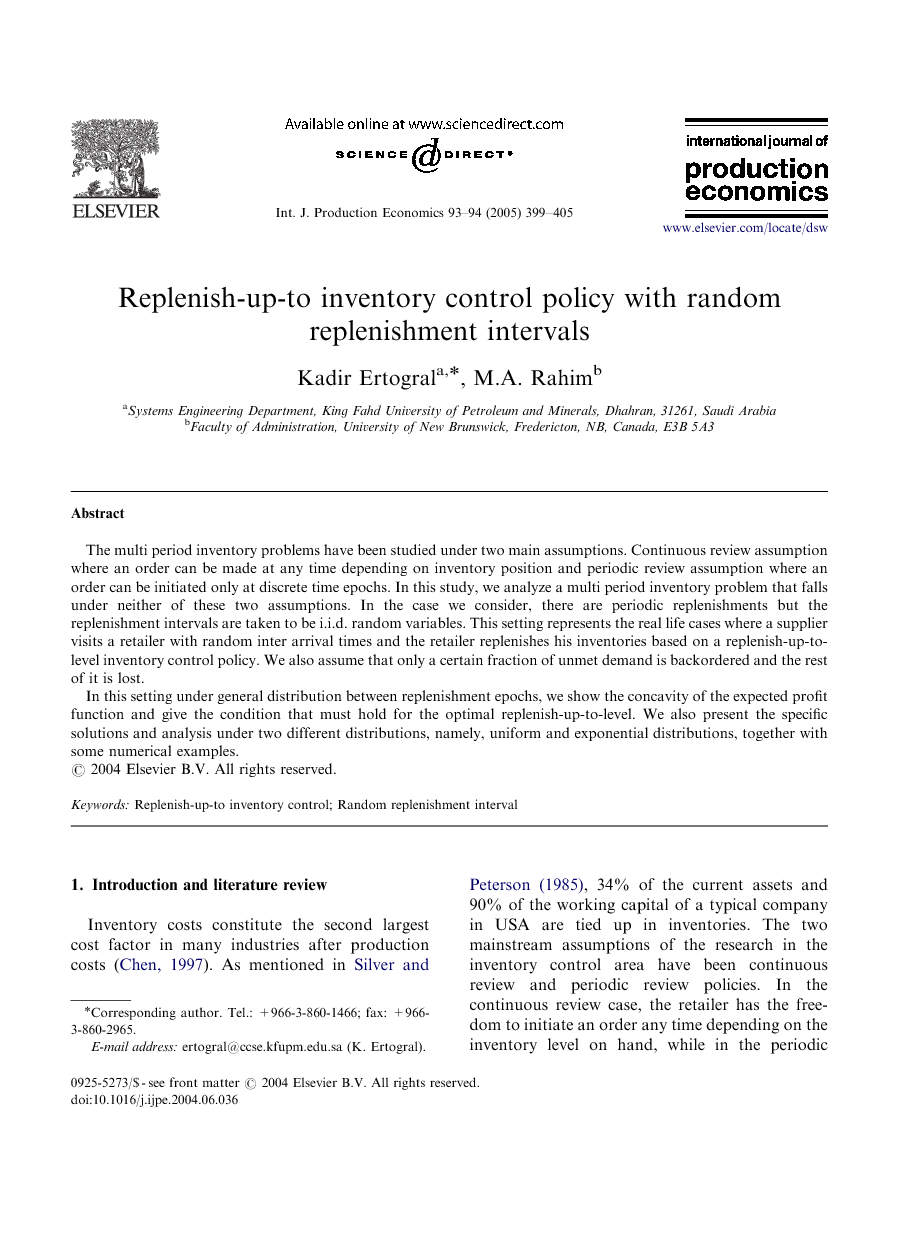 The multi period inventory problems have been studied under two main assumptions. Continuous review assumption where an order can be made at any time depending on inventory position and periodic review assumption where an order can be initiated only at discrete time epochs. In this study, we analyze a multi period inventory problem that falls under neither of these two assumptions. In the case we consider, there are periodic replenishments but the replenishment intervals are taken to be i.i.d. random variables. This setting represents the real life cases where a supplier visits a retailer with random inter arrival times and the retailer replenishes his inventories based on a replenish-up-to-level inventory control policy. We also assume that only a certain fraction of unmet demand is backordered and the rest of it is lost. In this setting under general distribution between replenishment epochs, we show the concavity of the expected profit function and give the condition that must hold for the optimal replenish-up-to-level. We also present the specific solutions and analysis under two different distributions, namely, uniform and exponential distributions, together with some numerical examples.

Inventory costs constitute the second largest cost factor in many industries after production costs (Chen, 1997). As mentioned in Silver and Peterson (1985), 34% of the current assets and 90% of the working capital of a typical company in USA are tied up in inventories. The two mainstream assumptions of the research in the inventory control area have been continuous review and periodic review policies. In the continuous review case, the retailer has the freedom to initiate an order any time depending on the inventory level on hand, while in the periodic review case the orders can only be made at discrete points in time. Since late 1930s, there have been literally thousands of studies on inventory control problems under these two main assumptions but in different settings varying based on single or multi period, demand behavior (Wagner and Whithin, 1958), lead time variability, perishability, deterioration, and obsolescence of the inventory (Federgruen et al., 1986, Abad, 1996 and Papachristos and Skouri, 2000), single or multiple stage (Clark and Scarf, 1960, Abad, 1988 and Hill, 1999), consideration of transportation cost (Swenseth and Godfrey, 2002 and Tersine and Barman, 1991) or not, etc. There have been several studies on base stock policies with lost sale/backordering consideration as well. Nahmias (1971) considers a periodic review inventory model with lost sale, partial backordering, set-up costs, and random lead times under no order crossing assumption. He suggests two heuristics to find order-up-to level. Donselaar et al. (1996) is another study where the authors suggest a heuristic to find order-up-to level in a systems allowing lost sales. More recently, Downs et al. (2001) studies an inventory problem with many real life aspects, namely, multiple items, resource constraint, lags in delivery, and lost sales. After showing the convexity of the inventory and shortage costs in the order-up-to level, they develop a linear programming model based on the non-parametric estimates of these costs. In two numerical examples, their linear programming model results differ from the optimal profit by 2.20% and 1.84%. Pricing has been another concern in inventory literature. Abad (2001) looks into a problem where pricing is a decision variable together with the order size assuming that only partial backordering is possible. All the inventory models mentioned above again fall into either periodic or continuous review and assume that the authority to initiate an order is with the purchaser or retailer. The setting of our problem is similar to the periodic review models. But it has the fundamental difference that the replenishment epochs are not under retailer's control. In some distributor–retailer situations, specially in third world countries where suppliers are in a relatively more powerful position, distributors visit the retailers in irregular intervals and the retailers should decide how much to increase their inventory level considering the demand rate, current inventory position, and the random time until the next replenishment opportunity. For example, this is exactly the way many small supermarkets replenish their inventories for many items in Turkey. Also in general for the supply chains where the supplier is strategically dominant compared to the retailer, the supplier can be the one deciding when she should replenish the retailer's inventories. Another situation that can be example for our setting is the case where the retailer is located in a geographically disadvantageous remote location. In this case, the supplier would likely to be the one making the decision as to when to visit and replenish the retailers inventories. In the next section we develop the expected profit function for the retailer. In Section 2, we give the solution of the model. Two special distribution cases are considered in Section 4. We include a conclusion as Section 5.

In this study, we analyze a multi period inventory problem under random replenishment intervals. We show the concavity of the profit function where the replenishment intervals follow a general distribution function and give the condition that must hold true for the optimal solution. For two special distributions, uniform and exponential, we also present specific solutions. A future study related the problem can be in the direction of relaxing the constant demand assumption or considering the case where not all the items received are perfect.