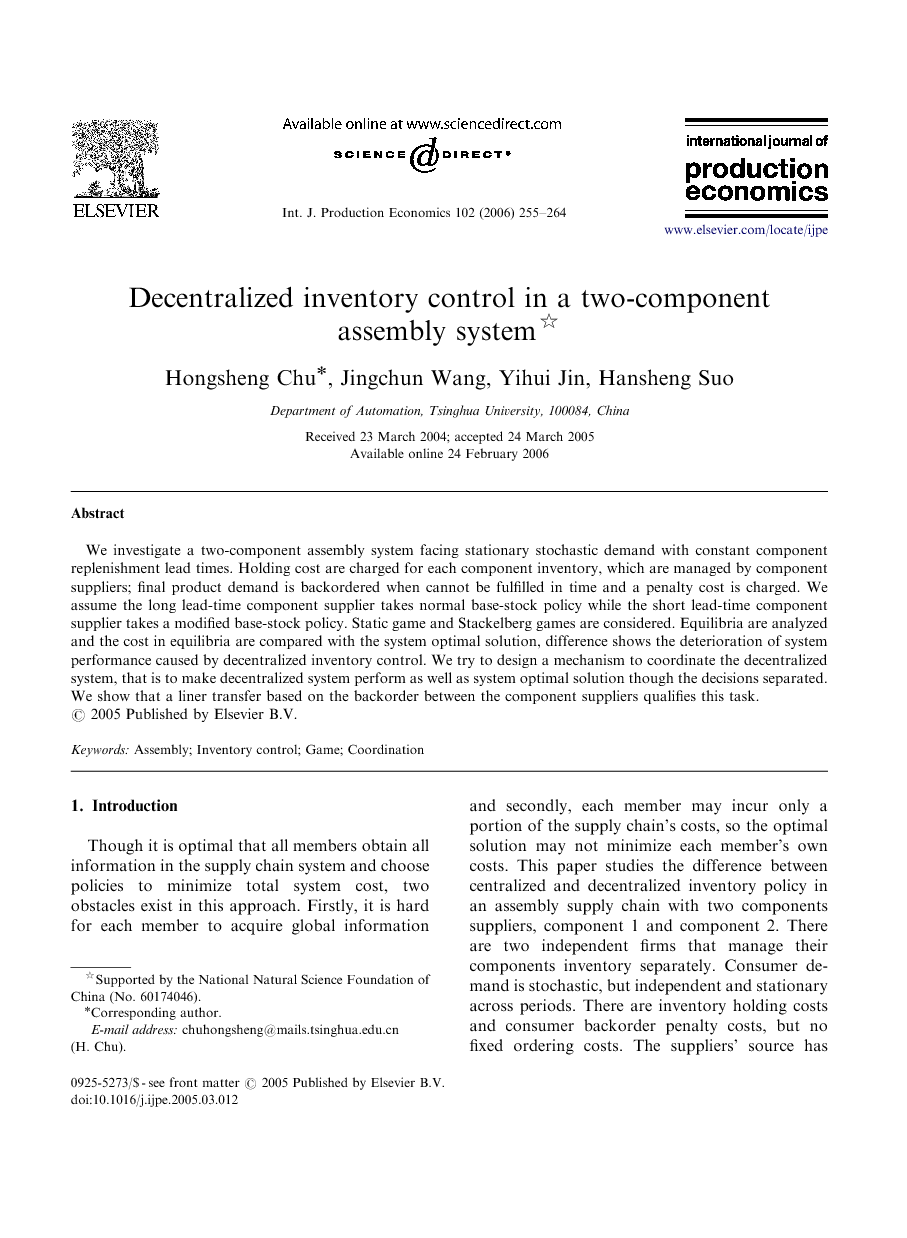 We investigate a two-component assembly system facing stationary stochastic demand with constant component replenishment lead times. Holding cost are charged for each component inventory, which are managed by component suppliers; final product demand is backordered when cannot be fulfilled in time and a penalty cost is charged. We assume the long lead-time component supplier takes normal base-stock policy while the short lead-time component supplier takes a modified base-stock policy. Static game and Stackelberg games are considered. Equilibria are analyzed and the cost in equilibria are compared with the system optimal solution, difference shows the deterioration of system performance caused by decentralized inventory control. We try to design a mechanism to coordinate the decentralized system, that is to make decentralized system perform as well as system optimal solution though the decisions separated. We show that a liner transfer based on the backorder between the component suppliers qualifies this task.

Though it is optimal that all members obtain all information in the supply chain system and choose policies to minimize total system cost, two obstacles exist in this approach. Firstly, it is hard for each member to acquire global information and secondly, each member may incur only a portion of the supply chain's costs, so the optimal solution may not minimize each member's own costs. This paper studies the difference between centralized and decentralized inventory policy in an assembly supply chain with two components suppliers, component 1 and component 2. There are two independent firms that manage their components inventory separately. Consumer demand is stochastic, but independent and stationary across periods. There are inventory holding costs and consumer backorder penalty costs, but no fixed ordering costs. The suppliers’ source has infinite capacity, and there is a constant transportation time to replenish from outsources to inventory. Optimal policy of the system is described as a normal base-stock policy for one supplier and a modified base-stock policy for another, which needs global-inventory-level information. We consider the static game between two suppliers and Stackelberg games lead by one of the suppliers. Assume they both take the policy structure of optimal policy. Under the given policy structure their policies are both specified by a single parameter (base-stock level). The two firms simultaneously choose their base-stock level in static game. This base-stock level cannot be modified once it is announced. Suppliers pay their own holding costs for their own component inventory and consumer backorder penalty for final product demand. In Stackelberg games, we assume that one of the suppliers dominates the system and chooses its strategy first, anticipating the reaction of the other. We show that in static game, a unique Nash equilibrium exists and deviates from the optimal. In Stackelberg game led by long lead-time supplier, we find the result is the same as in static game. But in short lead-time led Stackelberg game, this is not the case. Modifying suppliers’ cost structure can prompt them to choose a different strategy. Good contracts make them take optimal policy at equilibrium. We find a linear contract specifying transfer payments based on suppliers’ inventory level and backorders can meet this objective. The next section reviews the related literature, and Section 3 formulates the model. Section 4 describes the system optimal solution, and Section 5 analyzes the two games. Section 6 describes contracts that make the system optimal solution a Nash equilibrium. Section 7 discusses the numerical study.