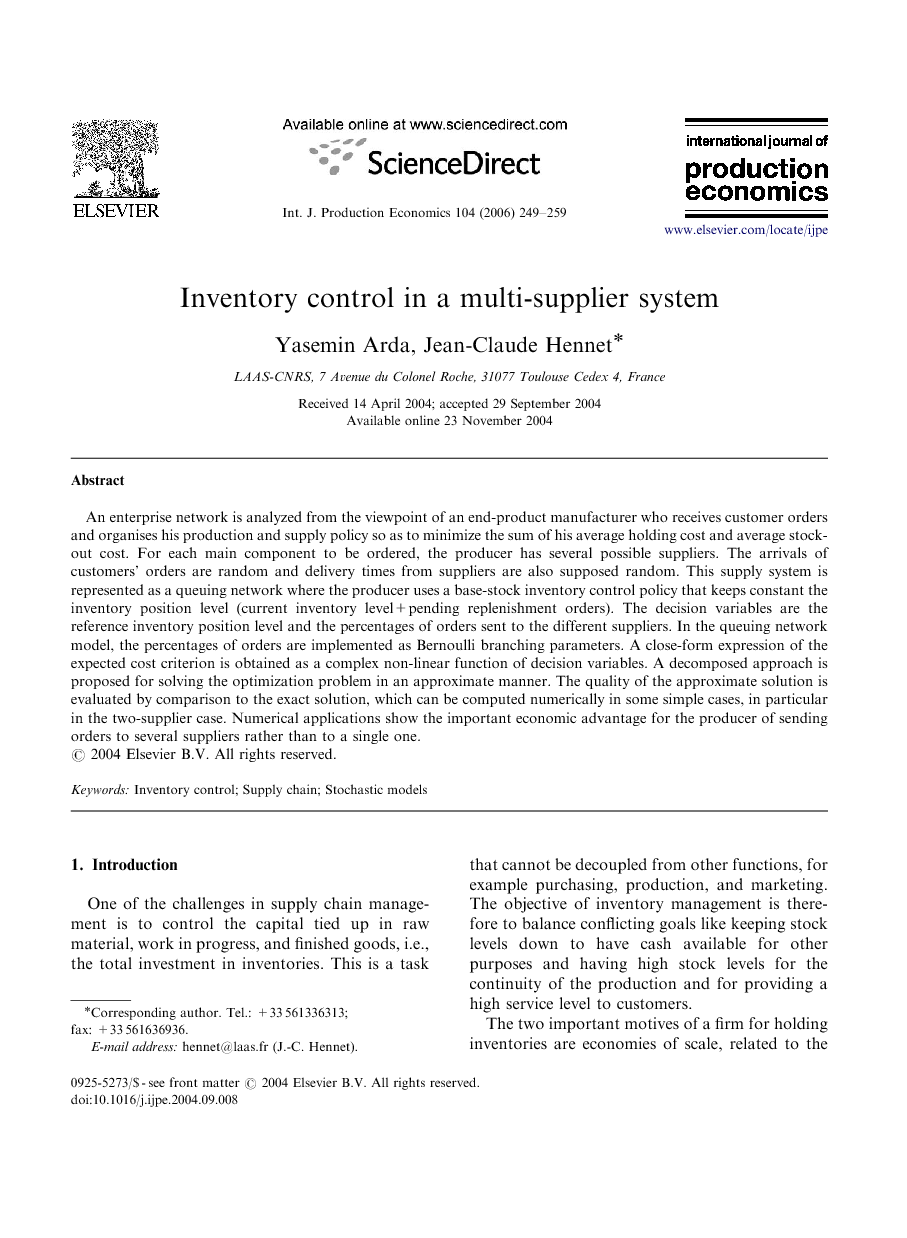 An enterprise network is analyzed from the viewpoint of an end-product manufacturer who receives customer orders and organises his production and supply policy so as to minimize the sum of his average holding cost and average stock-out cost. For each main component to be ordered, the producer has several possible suppliers. The arrivals of customers’ orders are random and delivery times from suppliers are also supposed random. This supply system is represented as a queuing network where the producer uses a base-stock inventory control policy that keeps constant the inventory position level (current inventory level+pending replenishment orders). The decision variables are the reference inventory position level and the percentages of orders sent to the different suppliers. In the queuing network model, the percentages of orders are implemented as Bernoulli branching parameters. A close-form expression of the expected cost criterion is obtained as a complex non-linear function of decision variables. A decomposed approach is proposed for solving the optimization problem in an approximate manner. The quality of the approximate solution is evaluated by comparison to the exact solution, which can be computed numerically in some simple cases, in particular in the two-supplier case. Numerical applications show the important economic advantage for the producer of sending orders to several suppliers rather than to a single one.

One of the challenges in supply chain management is to control the capital tied up in raw material, work in progress, and finished goods, i.e., the total investment in inventories. This is a task that cannot be decoupled from other functions, for example purchasing, production, and marketing. The objective of inventory management is therefore to balance conflicting goals like keeping stock levels down to have cash available for other purposes and having high stock levels for the continuity of the production and for providing a high service level to customers. The two important motives of a firm for holding inventories are economies of scale, related to the aim of reducing fixed costs by producing or ordering large lots, and the uncertainties inherent in the system. The focus of a major portion of the research in inventory management is inventory control in stochastic environments. Although demand uncertainty is the most obvious and significant source of uncertainty for most systems, other uncertainties exist as well. In particular, there may exist important uncertainties related to supply. Uncertainty in the order delivery lead time is a common problem in industries. Many firms have undertaken re-engineering efforts to improve the efficiency of their supply chains with the goal of better matching supply with demand so as to reduce the costs of inventory and the customer service times. Contracting the supplier with the shortest lead time is one strategy that complies with this aim. In many inventory control models, an item inventory is replenished from a single supplier. However, there are often situations in which more than one supplier may be necessary to sustain a desirable service standard or to reduce the total system cost. Particularly, when lead times are stochastic, multi-supplier strategies are more robust against the interruptions in supply and can lead to reducing inventory holding and shortage costs. This is generally because of the reduced chance of shortages and therefore reduced reorder and replenishment inventory levels. Obviously, multi-supplier strategies can be more costly in the presence of economies of scale due to the increase in ordering costs. However, in most practical settings, these incremental ordering costs can be outweighed by the savings in holding and shortage costs. Furthermore, multi-supplier strategies potentially create a competition among suppliers that can force the suppliers to provide faster delivery. There are various real-world examples where multi-supplier strategies are used to reduce the customer service times. For example, Sun Microsystems maintains multiple memory chip suppliers and allocates demand among them with a scorecard system based on their past performance. Air Products and Chemicals, a manufacturer of chemicals and gas, also allocates demands towards better performing suppliers. Another significant example is the case of Japanese auto manufacturers who use dual-sourcing on the majority of their components (Cachon and Zhang, 2003). But despite these real-world applications and the potential advantages of multi-supplier strategies, there has been surprisingly little theoretical work on how they should be implemented. Except for the studies on order-splitting (Sedarage et al., 1999; Ramasesh et al., 1991), the problem of inventory replenishment from more than one supplier has thus remained largely unexplored. This study analyzes multi-supplier strategies as one of the basic elements of a supply chain: the operational relationships between an end-producer and his direct suppliers. A simple queuing model is constructed based on the assumptions of a Poisson external demand for end-products, instantaneous delivery to the customer from the producer's stock, and an exponentially distributed service time for each supplier. Only one basic component of the end-product is considered and suppliers are supposed equivalent in terms of quality and cost. They only differ by their average service time. In spite of its simplicity, such a model grasps the main issues for the producer: should he use only one supplier, the best one in terms of a relevant performance index, or should he dispatch his orders between different suppliers? In the latter case, which suppliers should be selected and for what percentage of the demand? The potential usefulness of the model for the producer is in the a priori determination of his “optimal” inventory level and of the volumes (or frequency) of his orders to suppliers, based on a priori evaluation of their average delivery time. To optimize the producer's inventory level and the order dispatching proportions, it is essential to combine the effects of random fluctuations on demand flows, and delays of deliveries from suppliers. Random demands have often been considered in the existing models of inventory control, specially the ones based on the “newsvendor” paradigm (Arrow et al., 1951; Porteus, 1990). On the contrary, random delays in part deliveries have not often been integrated in models explicitly. An exception is the work of Dolgui and Louly (2002), in which several suppliers with random delivery delays are considered. In their work, the different suppliers provide different parts to be assembled by the producer. Then, there is interdependency between the inventory positions of the end product and of its components. However, the inventory positions of the different components can be independently controlled through the information and ordering system. On the contrary, the case of a centralized inventory of a single component does not offer the same possibility of decomposition. In this paper, a centralized inventory control model is constructed to combine supply and demand randomness. The objective of the producer is to minimize his average cost by constructing an ordering policy, defined by an optimal reference inventory position and a rule for selecting the supplier of each inventory replenishment order. Section 2 formulates the optimal inventory and ordering problem for one producer and several suppliers. Then Section 3 solves optimally the order dispatching problem in the particular make-to-order (MTO) case, and an approximate resolution technique is presented in Section 4 for the make-to-stock (MTS) case. The performance of the approximate solution is comparatively evaluated on simple examples in Section 5. Finally, some conclusions and perspectives are presented.

In this paper, we have introduced a new framework to address the problem of allocating orders among several suppliers. We have analysed the application of a multi-supplier strategy in a two-level supply chain with the purpose of evaluating possible savings in the inventory holding and shortage costs of the buyer. The study has shown that in the case of a random demand from customers and random delivery delays from suppliers, it is generally profitable to dispatch the orders between several suppliers rather than to direct all the replenishment orders toward a single one. More specifically, the addressed problem was to determine the percentages of orders to be directed toward each supplier and the base-stock level. This problem has been solved through explicit expressions in the N-suppliers MTO case. An approximate technique has been proposed to solve the general N-suppliers MTS case. This technique has been validated by comparison to the optimal solution in the dual sourcing case (N=2).