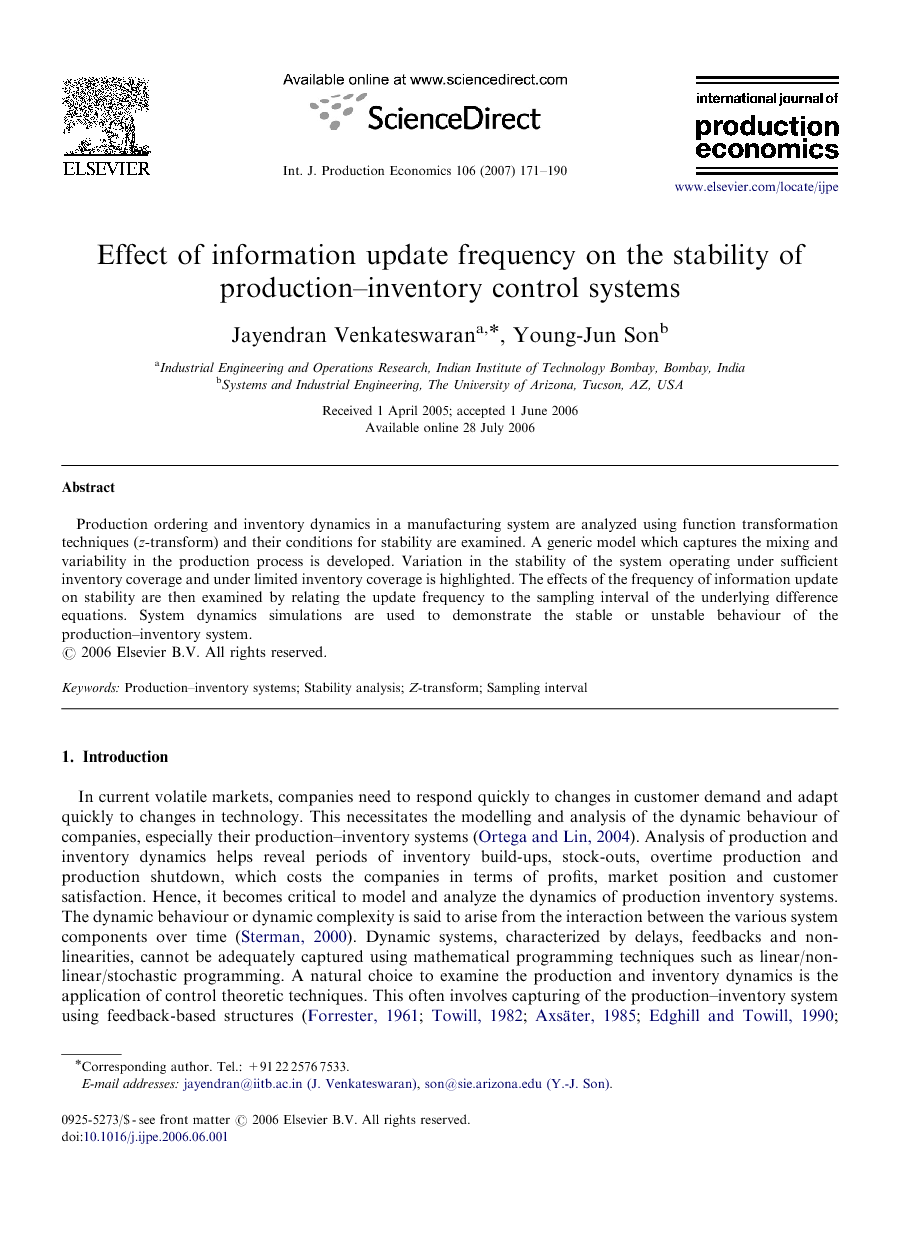 Production ordering and inventory dynamics in a manufacturing system are analyzed using function transformation techniques (z-transform) and their conditions for stability are examined. A generic model which captures the mixing and variability in the production process is developed. Variation in the stability of the system operating under sufficient inventory coverage and under limited inventory coverage is highlighted. The effects of the frequency of information update on stability are then examined by relating the update frequency to the sampling interval of the underlying difference equations. System dynamics simulations are used to demonstrate the stable or unstable behaviour of the production–inventory system.

A general production ordering and inventory control system has been described and analyzed. Generalized stability conditions have been derived using z-transformation techniques with the system parameters including fractional adjustment of WIP, fractional adjustment of inventory, exponential smoothing constant for forecast, number of production stages (or order of production delay), production lead time and the sampling interval. The stability boundaries for system operating under inventory adequacy and inventory insufficiency have been established. Jury's Test has been employed to derive the stability conditions for the complex higher order polynomials. These results have been verified through the simulation of the dynamic behaviour of the original system. The effect of the frequency of information update on the stability of the system has also been analyzed. The frequency of information update has been mapped on to the sampling interval of the underlying difference equations. Results have revealed that aggressive ordering policies (higher values of the fractional adjustment rates for WIP and inventory) require a more frequent information update, i.e. lower sampling interval. Also, the stable Deziel–Eilon settings of the fractional adjustment rates have been found to be dependent on the sampling interval, stressing the need to select the appropriate control parameters also based on the sampling interval. Further investigations need to be carried out to study the effect of multiple parameters, multiple non-linear constraints and their interactions. The influence of the sampling interval on special ordering schemes and manufacturing policies also needs to be studied. The natural progression of this paper would involve the future extension of this work in two directions. One direction is a horizontal extension to supply chain settings, where the stability effects of information update frequency between members of the supply chain analyzed in relation to the strategy of the supply chain employed (viz. lean, agile, vendor managed inventory). The other direction is a vertical extension within an enterprise to analyze the dynamic interactions between hierarchical planning and scheduling systems resulting in stable or unstable behavioural patterns, especially in the presence of disturbances.