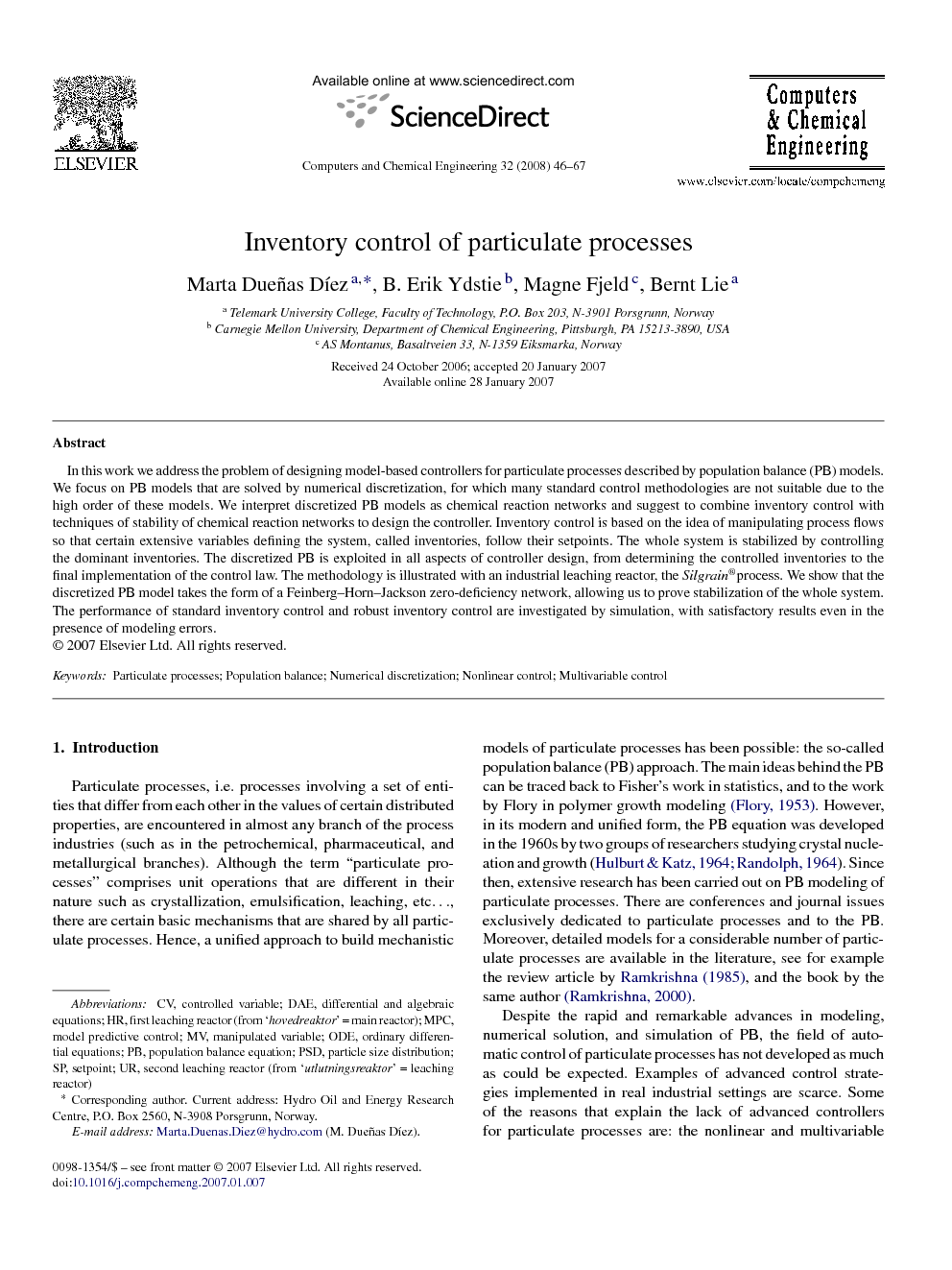 In this work we address the problem of designing model-based controllers for particulate processes described by population balance (PB) models. We focus on PB models that are solved by numerical discretization, for which many standard control methodologies are not suitable due to the high order of these models. We interpret discretized PB models as chemical reaction networks and suggest to combine inventory control with techniques of stability of chemical reaction networks to design the controller. Inventory control is based on the idea of manipulating process flows so that certain extensive variables defining the system, called inventories, follow their setpoints. The whole system is stabilized by controlling the dominant inventories. The discretized PB is exploited in all aspects of controller design, from determining the controlled inventories to the final implementation of the control law. The methodology is illustrated with an industrial leaching reactor, the Silgrain®process. We show that the discretized PB model takes the form of a Feinberg–Horn–Jackson zero-deficiency network, allowing us to prove stabilization of the whole system. The performance of standard inventory control and robust inventory control are investigated by simulation, with satisfactory results even in the presence of modeling errors.

The motivation of this paper was to design nonlinear controllers for particulate processes based on discretized PB models without further model manipulation. We interpreted discretized PB models as chemical reaction networks and suggested to combine inventory control with techniques of stability of chemical reaction networks to design the controller. In the inventory methodology, the discretized PB model is exploited in all aspects of controller design, from determining the controlled inventories (or dominant variables) to the final implementation of the control law. Inventory control of particulate processes involves the following stages: choosing the subset inventories to be controlled, deciding the type of strictly feedback law mapping errors into synthetic controls (the View the MathML sourceC(ex) operator), formulating the output feedback linearization law (manipulated variable synthesizer), checking the stability of internal dynamics with the help of methods from stability theory of chemical reaction networks, and checking that the controlled inventories can be measured indirectly as a function of measured intensive variables or through a state observer (controlled variable synthesizer). The inventory approach was successfully illustrated with the PB model of an industrial leaching reactor, belonging to the Silgrain® process. The stability of internal dynamics was demonstrated by using the Feinberg–Horn–Jackson zero-deficiency theory. The performance of two types of strictly feedback laws mapping errors into synthetic controls, were compared: a proportional controller and a sliding mode controller. This demonstrated that robust control was easy to achieve by substituting the proportional operator with a sliding mode operator. We can conclude that inventory control is a promising methodology for control of particulate processes. The main strengths of the methodology are: the controller is nonlinear, model-based, and multivariable; the controlled variables have clear physical meaning; robust performance to model errors can be achieved by choosing the appropriate feedback operators; and stabilization of the whole system is achieved by controlling a few dominant variables. One drawback related to the practical implementation of the controller is that in most cases a state estimator or observer will be required. Since a process model already exists, designing an observer should be straightforward with standard methods, such as the extended Kalman filter.