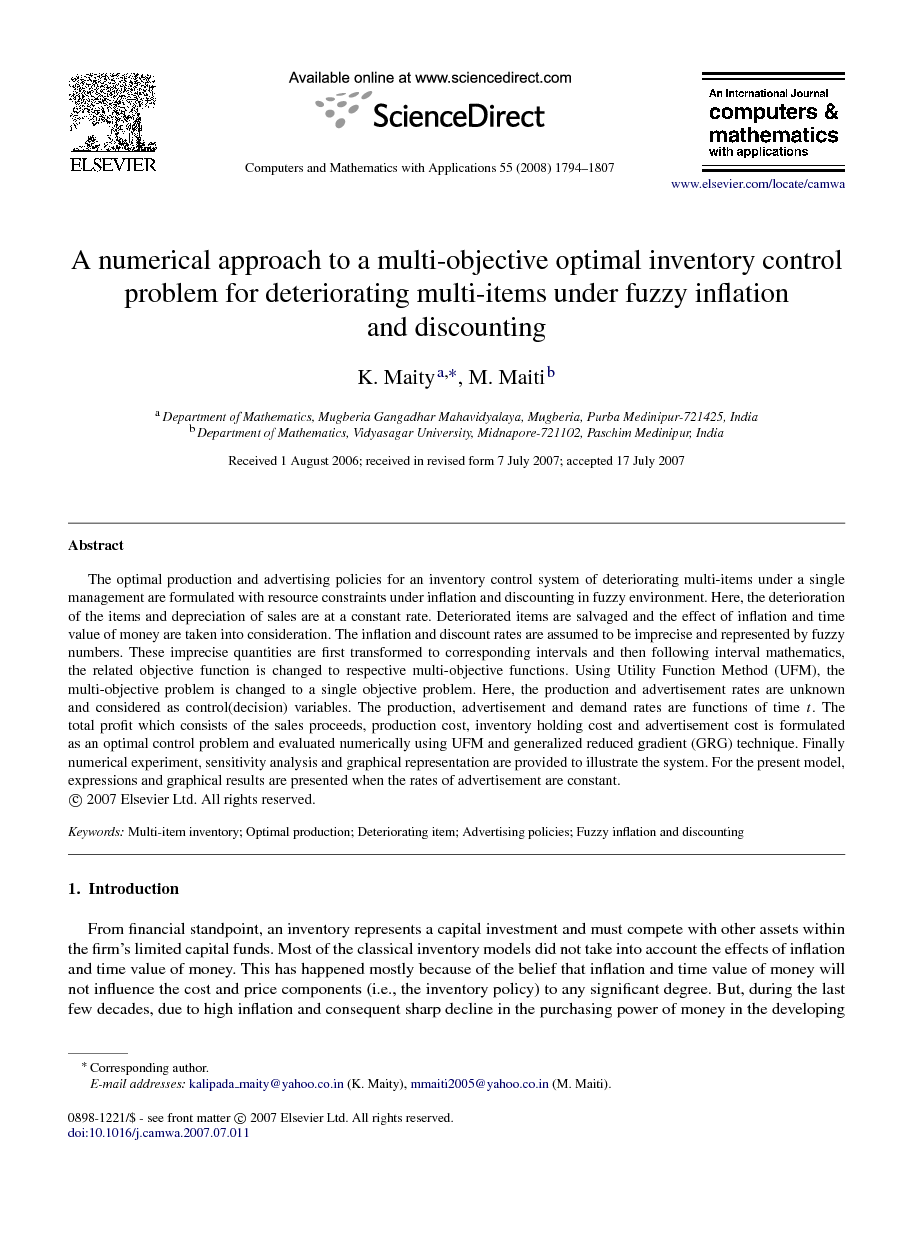 The optimal production and advertising policies for an inventory control system of deteriorating multi-items under a single management are formulated with resource constraints under inflation and discounting in fuzzy environment. Here, the deterioration of the items and depreciation of sales are at a constant rate. Deteriorated items are salvaged and the effect of inflation and time value of money are taken into consideration. The inflation and discount rates are assumed to be imprecise and represented by fuzzy numbers. These imprecise quantities are first transformed to corresponding intervals and then following interval mathematics, the related objective function is changed to respective multi-objective functions. Using Utility Function Method (UFM), the multi-objective problem is changed to a single objective problem. Here, the production and advertisement rates are unknown and considered as control(decision) variables. The production, advertisement and demand rates are functions of time tt. The total profit which consists of the sales proceeds, production cost, inventory holding cost and advertisement cost is formulated as an optimal control problem and evaluated numerically using UFM and generalized reduced gradient (GRG) technique. Finally numerical experiment, sensitivity analysis and graphical representation are provided to illustrate the system. For the present model, expressions and graphical results are presented when the rates of advertisement are constant.

The present paper deals with the optimum production and advertising policy for a multi-item production-inventory system with deteriorating units, depreciation rate of sales, salvage value of deteriorated items, space capacity constraint, investment constraint and dynamic demand under the imprecise inflation and time discounting environment. Also some ideas such as (i) optimal control production problem for deteriorating multi-items, (ii) advertisement-dependent demand, (iii) dynamic production function, (iv) production-quantity-dependent unit cost and (v) imprecise inflation and imprecise depreciation in many value have been introduced for the first time. In the solution approach, the new ideas are: (i) using interval mathematics for fuzzy numbers for their crisp value. In this connection, the Lemma 1 with an interval power of exponential has been reduced to an interval for the first time. As already mentioned earlier, for the first time, a new type of utility function with individual optimum values has been defined and used to convert multi-objective problem to a single objective one in an inventory control system. The formulation and analysis presented here can be extended to other production-inventory problems with different types of demand, advertisement, deterioration, defect, price discount, etc.