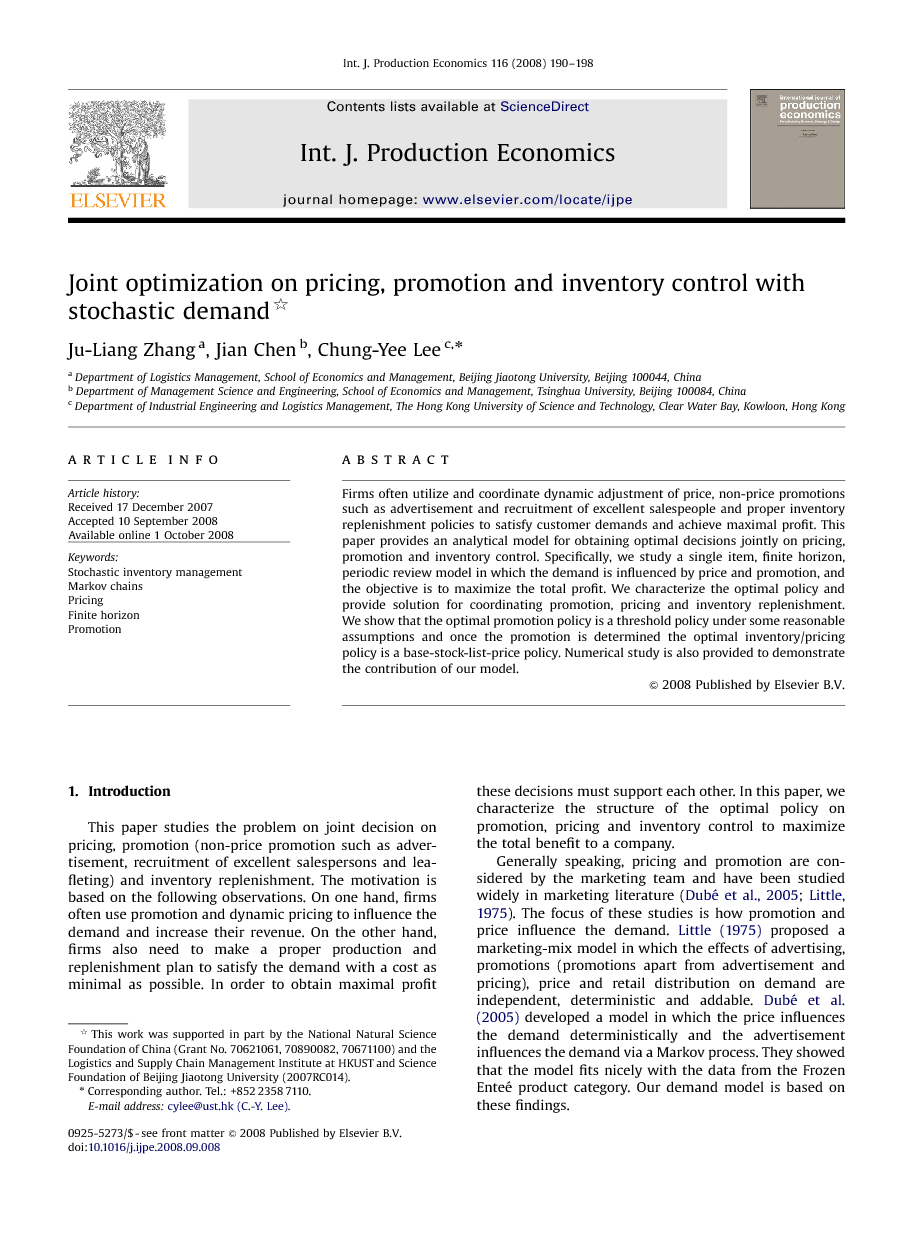 Firms often utilize and coordinate dynamic adjustment of price, non-price promotions such as advertisement and recruitment of excellent salespeople and proper inventory replenishment policies to satisfy customer demands and achieve maximal profit. This paper provides an analytical model for obtaining optimal decisions jointly on pricing, promotion and inventory control. Specifically, we study a single item, finite horizon, periodic review model in which the demand is influenced by price and promotion, and the objective is to maximize the total profit. We characterize the optimal policy and provide solution for coordinating promotion, pricing and inventory replenishment. We show that the optimal promotion policy is a threshold policy under some reasonable assumptions and once the promotion is determined the optimal inventory/pricing policy is a base-stock-list-price policy. Numerical study is also provided to demonstrate the contribution of our model.

This paper studies the problem on joint decision on pricing, promotion (non-price promotion such as advertisement, recruitment of excellent salespersons and leafleting) and inventory replenishment. The motivation is based on the following observations. On one hand, firms often use promotion and dynamic pricing to influence the demand and increase their revenue. On the other hand, firms also need to make a proper production and replenishment plan to satisfy the demand with a cost as minimal as possible. In order to obtain maximal profit these decisions must support each other. In this paper, we characterize the structure of the optimal policy on promotion, pricing and inventory control to maximize the total benefit to a company. Generally speaking, pricing and promotion are considered by the marketing team and have been studied widely in marketing literature (Dubé et al., 2005; Little, 1975). The focus of these studies is how promotion and price influence the demand. Little (1975) proposed a marketing-mix model in which the effects of advertising, promotions (promotions apart from advertisement and pricing), price and retail distribution on demand are independent, deterministic and addable. Dubé et al. (2005) developed a model in which the price influences the demand deterministically and the advertisement influences the demand via a Markov process. They showed that the model fits nicely with the data from the Frozen Enteé product category. Our demand model is based on these findings. There has been substantial and growing literature on the joint pricing and inventory control problem. This includes the classical one by Whitin (1955) that studied the Newsboy problem with price dependent demand and two excellent survey papers by Yano and Gilbert (2003) and Elmaghraby and Keskinocak (2003). This paper is closely related to Federgruen and Heching (1999) (FH model), which addressed multi-period models by assuming that the price can be adjusted dynamically. They proved that the optimal policy is a base-stock-list-price policy. Karakul (2008) and Webster and Weng (2008) also considered the joint pricing and inventory control problem for fashion products. There has also been extensive literature on coordinated promotion and inventory control. Balcer, 1980 and Balcer, 1983 studied a dynamic inventory/advertising model in which the advertising affects the deterministic component. Sogomonian and Tang (1993) considered an integrated promotion and production decision model, in which the demand model is adopted from Little (1975). Sethi and Zhang (1994) and Cheng and Sethi (1999) (CS model) developed a general stochastic production/advertising model in which the random demand is influenced by promotion via a Markov process. They showed that the optimal promotion policy has simple structure. In this paper, we analyze the joint decision on pricing, promotion and inventory management problem. Namely, we try to study the problem that combines the above two streams of research. In particular, we extend FH model to include promotion and extend CS model by considering the dynamic adjustment of the price. We try to answer the following question: in what situations should firms adopt just promotion, adopt just price adjustment, or adopt both actions simultaneously in order to obtain the maximal profit. We show that the optimal promotion policy still has simple structure, which is similar to CS model. Furthermore, once the promotion is determined, the optimal inventory/pricing policy is a base-stock-list-price policy. As stated above, our model is related to CS model. But there are significant differences between our model and CS model. Cheng and Sethi (1999) pointed out that price discount can be seen as a promotion and the price discount can be easily incorporated in their model. Hence, the price can only be decreased in their model. However, it can be adjusted bidirectionally in our model. Note that non-price promotion and dynamic pricing are two different tools that can be exploited simultaneously to influence demand and the effects of these two tools on demand were considered separately in marketing literature (Dubé Jean-Pierre et al., 2005; Little, 1975). Furthermore, in CS model, the cost incurred by the price discount is a fixed constant and can be determined previously. It is well known that the cost (profit) incurred by the price decreasing (increasing) is proportional to the sale (Federgruen and Heching, 1999; Petruzzi and Dada, 1999; Whitin, 1955). Hence, comparing to CS model, we are dealing with a more general and more reasonable model. Our analysis suggests that a firm can be benefited from the coordination of pricing flexibility, promotion and inventory control. We also show how to coordinate these three decisions to maximize the total profit in a firm. Some new managerial insights are obtained, including for example, we should conduct a promotion and charge a high price to get more profit if the promotion cost is low or the effect of promotion is high and no promotion is conducted and only dynamic pricing is adopted to influence demands otherwise. We will stock more production and charge a higher price when a promotion is conducted. The rest of the paper is organized as follows. In Section 2, we present the basic model and assumptions. In Section 3, we characterize the optimal policy for the finite period problem. In Section 4, we show that the optimal policy can be simplified further under some additional assumptions. Some numerical experiments are also provided.

This paper addresses joint decisions on promotion, pricing and inventory replenishment. We show that the optimal policy consists of two base-stock-list-price policies, which correspond to whether or not a promotion is conducted. Hence, the optimal policy exhibits a simple structure. Note that if the price is fixed, our model is reduced to CS model and if there is always no promotion (or a promotion) conducted, our model is reduced to FH model. Our results generalize the results in Cheng and Sethi (1999) and Federgruen and Heching (1999) for linear demand case. The numerical results in Section 4 show the advantages of our model over the other ones. In addition, some more managerial insights can be obtained from this study: (i) If the perturbation state in a period is stochastically larger, the optimal price will be higher; and for a given perturbation state, the optimal price is nonincreasing in the initial inventory; (ii)A firm can get more profit by coordinating the decision on promotion, pricing and inventory control. If a promotion will lead to a high demand state, the optimal promotion policy has simple structure—single threshold and it is better to stock more production and charge a higher price when a promotion is conducted. (iii) It is more profitable to conduct a promotion and charge a high price if the promotion cost is low or the effect of promotion is high and only pricing is dynamically adopted to influence demands otherwise.