عنوان انگلیسی
Inventory control for the supply chain: An adaptive control approach based on the identification of the lead-time
دانلود فوری مقاله + سفارش ترجمه 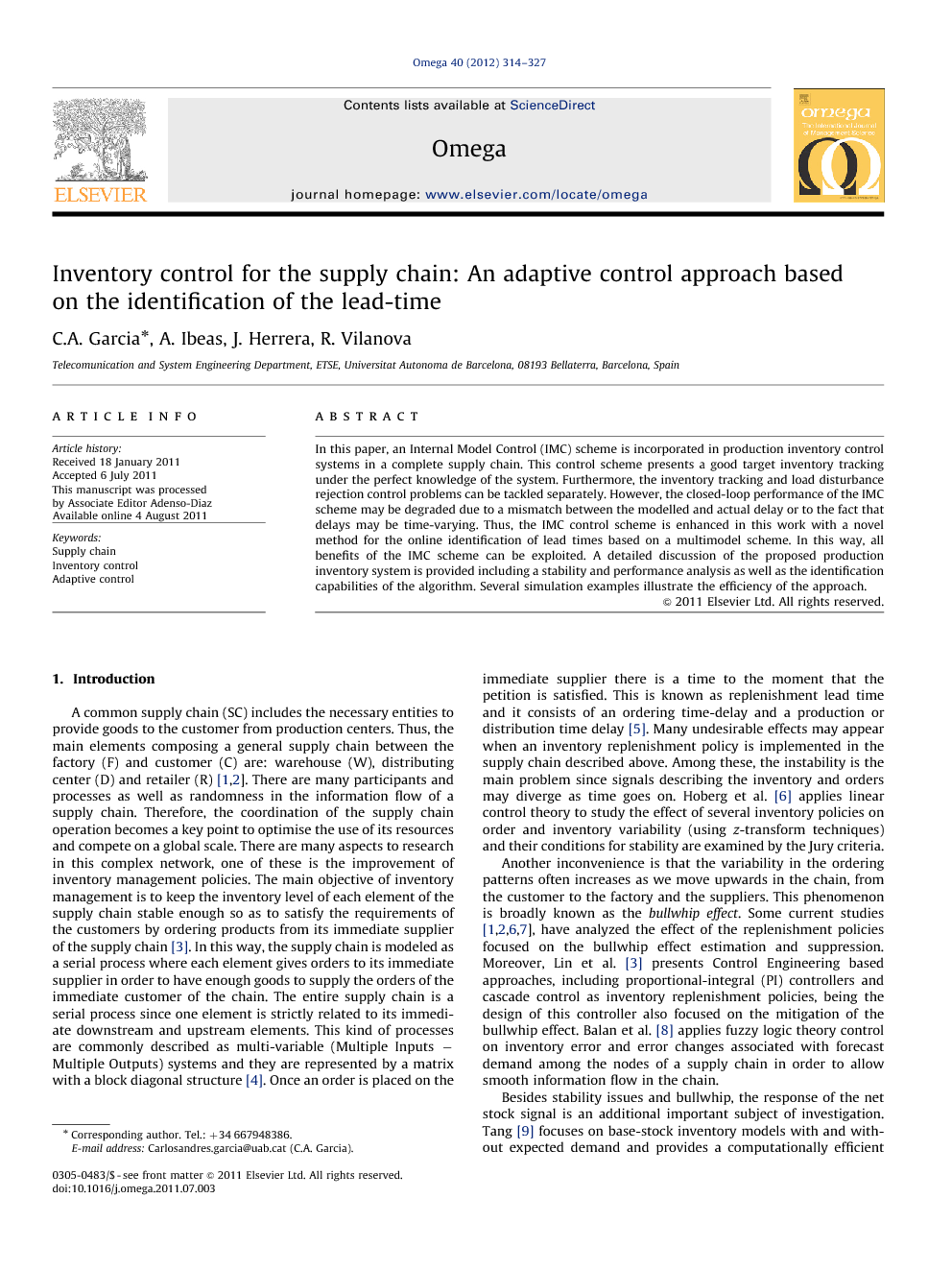 In this paper, an Internal Model Control (IMC) scheme is incorporated in production inventory control systems in a complete supply chain. This control scheme presents a good target inventory tracking under the perfect knowledge of the system. Furthermore, the inventory tracking and load disturbance rejection control problems can be tackled separately. However, the closed-loop performance of the IMC scheme may be degraded due to a mismatch between the modelled and actual delay or to the fact that delays may be time-varying. Thus, the IMC control scheme is enhanced in this work with a novel method for the online identification of lead times based on a multimodel scheme. In this way, all benefits of the IMC scheme can be exploited. A detailed discussion of the proposed production inventory system is provided including a stability and performance analysis as well as the identification capabilities of the algorithm. Several simulation examples illustrate the efficiency of the approach.

In this paper, a decentralized inventory control approach based on an IMC delay compensation scheme for the MIMO supply chain is formulated. In this approach, each echelon takes decisions based on global values of the demand. Therefore, all customers demand are lumped into a single aggregate demand signal. In the IMC delay compensation scheme, the system's delay has to be known beforehand to perform its perfect compensation. However, this situation is not viable for the supply chain problem since delay may be unknown or even time-varying. A solution to this problem is to perform an identification of the delay using subsequently the estimated value to generate the control law. Thus, a delay identification algorithm is proposed in this work for the complete supply chain being able of identifying the delays between the different echelons describing the supply chain. The identified values of the delays are then used to adjust the delay compensation in a IMC based decentralized compensation scheme. The set of models is updated through time following a Pattern Search based algorithm which is a novel application in control and supply chain systems. The pattern search algorithm is implemented for practical purposes using a multimodel scheme. The convergence properties of the algorithm to the actual delay are proved and simulation examples have shown that the algorithm identifies the complete set of lead times of the supply chain timely improving the performance of the inventory control. The IMC delay compensation control structure complemented with the delay identification scheme has been applied in a serial supply chain with good results. Therefore, future works can be focused on the application of this scheme with a centralized control strategy where each demand signal is considered separately. Moreover, [31] and [32] have considered more complex supply chain models where multiple delays and cooperation between echelons are also considered. The mathematical model for this kind of systems is a general matrix instead of the block-diagonal one considered in this work. Hence, the delay mismatch becomes a harder problem in this situation. Therefore, the application of IMC strategies augmented with the lead time identification algorithm would be a promising way in order to improve the overall response of the system. Furthermore, the problem can be complicated assuming the lead times being sluggishly variable in the time.