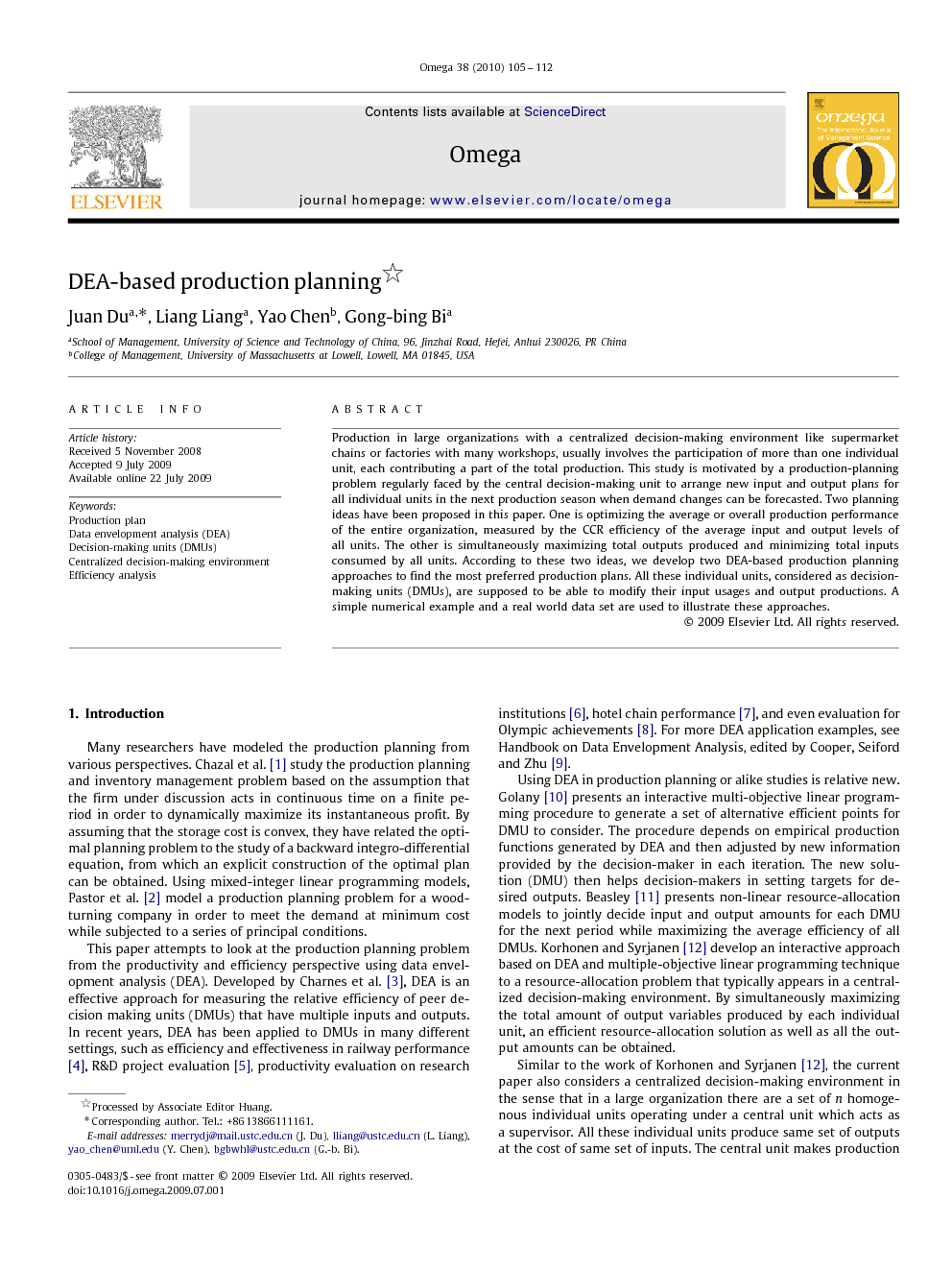 Production in large organizations with a centralized decision-making environment like supermarket chains or factories with many workshops, usually involves the participation of more than one individual unit, each contributing a part of the total production. This study is motivated by a production-planning problem regularly faced by the central decision-making unit to arrange new input and output plans for all individual units in the next production season when demand changes can be forecasted. Two planning ideas have been proposed in this paper. One is optimizing the average or overall production performance of the entire organization, measured by the CCR efficiency of the average input and output levels of all units. The other is simultaneously maximizing total outputs produced and minimizing total inputs consumed by all units. According to these two ideas, we develop two DEA-based production planning approaches to find the most preferred production plans. All these individual units, considered as decision-making units (DMUs), are supposed to be able to modify their input usages and output productions. A simple numerical example and a real world data set are used to illustrate these approaches.

Many researchers have modeled the production planning from various perspectives. Chazal et al. [1] study the production planning and inventory management problem based on the assumption that the firm under discussion acts in continuous time on a finite period in order to dynamically maximize its instantaneous profit. By assuming that the storage cost is convex, they have related the optimal planning problem to the study of a backward integro-differential equation, from which an explicit construction of the optimal plan can be obtained. Using mixed-integer linear programming models, Pastor et al. [2] model a production planning problem for a woodturning company in order to meet the demand at minimum cost while subjected to a series of principal conditions. This paper attempts to look at the production planning problem from the productivity and efficiency perspective using data envelopment analysis (DEA). Developed by Charnes et al. [3], DEA is an effective approach for measuring the relative efficiency of peer decision making units (DMUs) that have multiple inputs and outputs. In recent years, DEA has been applied to DMUs in many different settings, such as efficiency and effectiveness in railway performance [4], R&D project evaluation [5], productivity evaluation on research institutions [6], hotel chain performance [7], and even evaluation for Olympic achievements [8]. For more DEA application examples, see Handbook on Data Envelopment Analysis, edited by Cooper, Seiford and Zhu [9]. Using DEA in production planning or alike studies is relative new. Golany [10] presents an interactive multi-objective linear programming procedure to generate a set of alternative efficient points for DMU to consider. The procedure depends on empirical production functions generated by DEA and then adjusted by new information provided by the decision-maker in each iteration. The new solution (DMU) then helps decision-makers in setting targets for desired outputs. Beasley [11] presents non-linear resource-allocation models to jointly decide input and output amounts for each DMU for the next period while maximizing the average efficiency of all DMUs. Korhonen and Syrjanen [12] develop an interactive approach based on DEA and multiple-objective linear programming technique to a resource-allocation problem that typically appears in a centralized decision-making environment. By simultaneously maximizing the total amount of output variables produced by each individual unit, an efficient resource-allocation solution as well as all the output amounts can be obtained. Similar to the work of Korhonen and Syrjanen [12], the current paper also considers a centralized decision-making environment in the sense that in a large organization there are a set of n homogenous individual units operating under a central unit which acts as a supervisor. All these individual units produce same set of outputs at the cost of same set of inputs. The central unit makes production plans for all the individual units based upon the forecasted demands for the future. With the forecasted demands for the outputs, the paper develops DEA-based models to determine new production plans for all the individual units under a centralized decision-maker. For example, a bank's cooperate management decides a sales plan for its branches with respect to the number of credit cards to be issues and number of loans to be processed. Corresponding to two different planning ideas, the central unit determines a new production plan in such two ways that (1) the average or overall production performance in the entire organization will be optimized after planning, which means maximizing the efficiency of the average input and output levels of all individual units under the framework of DEA, and (2) within the original production possibility set, the total outputs produced by all units will be maximized, and at the same time the total inputs consumed will be minimized. For Idea 1, we consider three demand change cases and their combinations. First, we assume that all demand changes for all outputs are either positive or negative. We then relax this requirement and assume that some demand changes are positive, some are negative and the rest are zero, i.e., no demand change is predicated. As for Idea 2, these three demand change situations can be incorporated into one model. The rest of this paper is organized as follows. Section 2 takes the perspective of Idea 1, and develops a planning approach based on CCR efficiency analysis and several production planning models fitting different situations in demand changes. Section 3 proposes a DEA-based production planning model from Idea 2, and proves an important property concerning the CCR efficiency of the new plans. Both approaches in 2 and 3 are demonstrated by a same simple numerical example. Section 4 applies the two approaches to real world data set consisting of 20 fast food restaurants. Section 5 concludes.

In this paper, two DEA-based approaches have been developed for making future production plans in a centralized decision-making environment when demand changes can be forecasted. We assume that there exists a central unit in charge of production planning for a set of homogeneous units. Two planning ideas have been proposed. The first one is to optimize the average or overall production performance in the entire organization after planning. CCR efficiency score is used to measure the production performance of units. In addition, the preferences of the central unit can also be taken into consideration when developing planning models. The second idea is to simultaneously maximize total output production and minimize total input consumption in the entire organization. DEA is used to characterize the production possibility set, which describes the production plans that are technically feasible in general. The set is estimated by the observed performance of all the units under consideration and assumed to be unchanged during a planning period. Planning results of all units from this method lie on the original efficient frontier with a CCR efficiency of 1. There are two possible extensions. One is that for both methods, the production planning problem can be extended to a different situation where all individual units make their own production plans instead of being supervised by a central decision-making unit. Therefore, all units aim at optimizing their respective production performance instead of the overall performance. This situation will make all units under consideration change from a cooperative relationship to a non-cooperative competitive relationship. The other extension is that for Idea 1, some other measurements, instead of the CCR efficiency of the average input and output levels of all DMUs, can be adopted to measure the overall production performance in the objective function in the planning models.