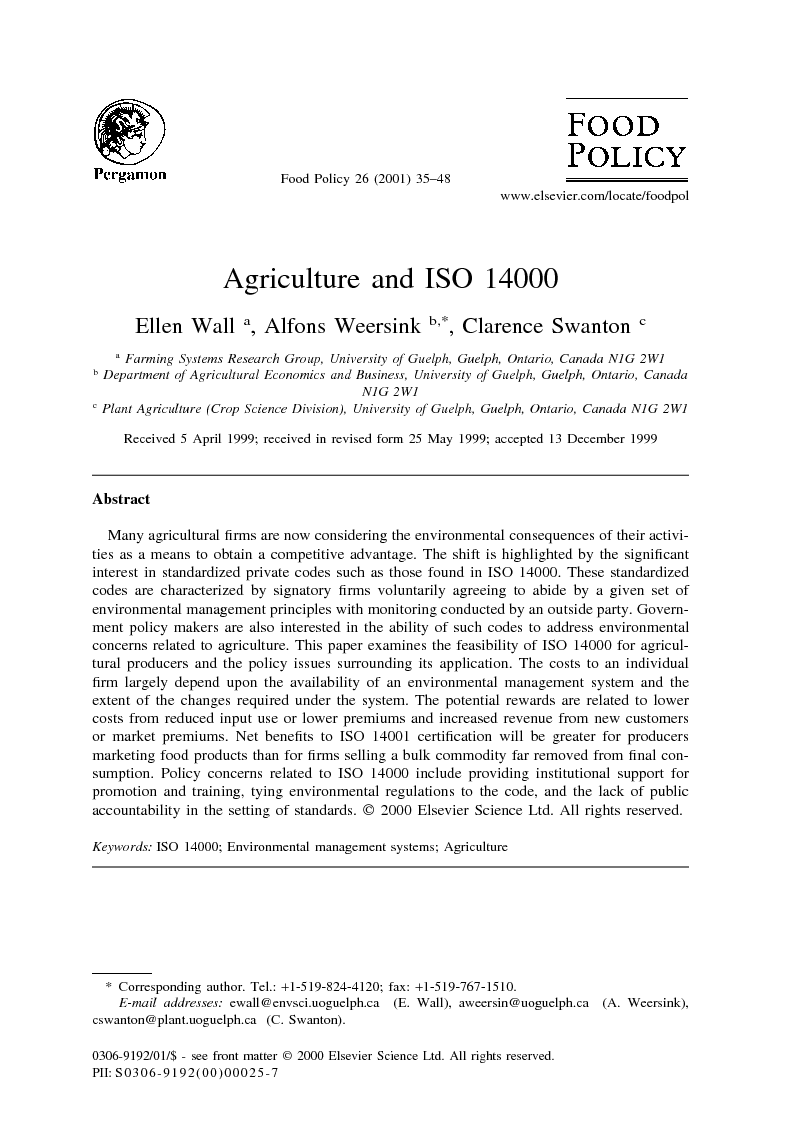 Many agricultural firms are now considering the environmental consequences of their activities as a means to obtain a competitive advantage. The shift is highlighted by the significant interest in standardized private codes such as those found in ISO 14000. These standardized codes are characterized by signatory firms voluntarily agreeing to abide by a given set of environmental management principles with monitoring conducted by an outside party. Government policy makers are also interested in the ability of such codes to address environmental concerns related to agriculture. This paper examines the feasibility of ISO 14000 for agricultural producers and the policy issues surrounding its application. The costs to an individual firm largely depend upon the availability of an environmental management system and the extent of the changes required under the system. The potential rewards are related to lower costs from reduced input use or lower premiums and increased revenue from new customers or market premiums. Net benefits to ISO 14001 certification will be greater for producers marketing food products than for firms selling a bulk commodity far removed from final consumption. Policy concerns related to ISO 14000 include providing institutional support for promotion and training, tying environmental regulations to the code, and the lack of public accountability in the setting of standards.

The agricultural sector has traditionally produced generic, homogeneous commodities primarily for feed use. However, as we enter the 21st century the sector is changing to one that manufactures products increasingly for food and industrial use. The process, termed the industrialization of agriculture, is due largely to information and production technological advances that permit an increasingly segmented consumer market to be linked with agricultural producers. The linkage allows producers to supply products with specific attributes as demanded by the particular end-use market as opposed to the traditional means of supplying a generic commodity sold on an open spot market. The attributes desired could be associated with any number of features including chemical composition, volume, timing, texture and/or characteristics of the production process. For example, the demand could be for crop products that do not contain genetically modified organisms (GMOs) or are pesticide free, or for livestock products that have been raised in a certain manner. For such demands to be met successfully, there must be a means of ensuring the products contain the specific attributes desired by the end-use markets. Although the product supplied by farmers can be readily tested for qualities such as protein or texture, characteristics of the production process cannot be easily verified ex post. A voluntary or regulatory code is necessary to provide such assurances. In response, partially to customer demands and public expectations, many firms outside of the agricultural sector are also considering the relationship between their production activities and their markets particularly the previously ignored environmental consequences of their activities (Esty and Chertow, 1997 and Morelli, 1999). The shift is highlighted by the significant interest in standardized private codes such as those found in ISO 14000. These standardized codes are characterized by the voluntary agreement from signatory firms to abide with a given set of environmental management principles that are monitored by an outside party. Many business analysts believe that registration with codes verifying a firm's adoption of environmentally responsible actions will become a necessary condition to be successful, particularly when trading internationally (Office of Consumer Affairs, 1998 and Webb, 1998). However, because the ISO environmental initiative is so recent, little is known about its applicability and potential for such voluntary standardized codes, especially in the agri-food sector. There are also unanswered public policy questions whether business-led initiatives such as ISO 14000 can achieve environmental objectives efficiently. Appropriate environmental policy that will garner public support and lead to environmental improvements remains a challenge for all sectors but particularly for agriculture given the non-point or diffuse source nature of many of its emissions (Weersink et al., 1998). In general, policy designed for agriculture and policy for the environment had been treated as antithetical until events and concerns in the 1960s and '70s led to their convergence into what can be broadly termed agri-environmental policy (Swanson and Clearfield, 1994). These agri-environmental policies have evolved toward micro-managed programs that have demonstrated environmental value (Potter, 1998) and include the trend toward market-based, business-led initiatives (Batie, 1997). Even if it is not profitable for an individual firm to become ISO 14000 certified, government involvement in promoting a business-led initiative such as ISO may be justified if the total benefits, including environmental improvements, are greater than the costs. The purpose of this article is to examine the feasibility and issues surrounding the use of ISO 14000 for agricultural producers. We begin with some background information on the development of ISO and the components of ISO 14000. The paper then discusses the steps necessary for a firm to become ISO 14000, including potential problems and solutions for agricultural operations. Costs and benefits of the certification process are then reviewed to determine whether producers would be able to obtain market premiums sufficient to offset compliance and auditing costs. The paper concludes with policy issues facing the agri-food sector confronted by voluntary standardized codes such as ISO 14000.

Whether ISO 14001 is profitable for an individual agricultural producer depends on the relative costs and benefits. Certification costs will decrease with the availability of environmental policy statements and management systems that can be adapted easily by an individual farm. Annual auditing costs will likely represent the major compliance expense for producers but this item may be spread among other producers or purchasers depending upon the route chosen for ISO certification. The potential benefits from ISO 14001 are in the form of an enhanced competitive position from the lowering of input costs including reduced liability risks, increased market demand, and a reduction in regulatory pressures. These benefits will likely be less than the associated costs for traditional farms selling a homogeneous commodity on a spot market. However, new technology, both information and biotechnology, is allowing producers to engineer food products that meet consumer demands for various attributes including their concern for the environmental impacts of the production process. The sale of these products tends to be negotiated through contracts rather than auctions. The negotiated coordination may allow producers to obtain added value for goods produced under ISO 14001 or it may become a necessary condition demanded by purchasers in order for sale to occur. Because the ISO 14000 series is new and relatively untested much of our discussion has to be phrased in hypothetical terms, especially since agricultural examples are so scarce. Nevertheless, there are significant points that bear repeating, especially in terms of policy implications. The focus of ISO 14000 on environmental impacts implies that its feasibility is not only an issue for individual businesses but also for public policy makers. Even if it is not beneficial for firms to become certified, government involvement in promoting ISO 14001 can be justified if the total benefits, including environmental improvements, are greater than the costs. Adoption can be promoted through the provision of environmental management system templates or through training and education into the certification procedures. The monitoring requirements under ISO 14001 could also serve as a reporting device under existing or potential regulatory programs. Governments could also stimulate firms to consider the environmental implications of their actions by reducing the threat of more stringent environmental policy tools for those firms that are ISO 14001 certified. However, potential environmental impacts are uncertain as the focus of ISO 14001 is on environmental practices and not on performance measures. Another public policy concern with ISO 14000 is the power an industry has to institute international trade standards without involvement from the public or government institutions, thereby avoiding constraints from the democratic process and/or public accountability. In addition, some feel that ISO 14000 might have a potentially weakening effect on more regional and industry specific initiatives for sustainable development (BEC, 1996). The concerns are particularly relevant for developing nations who do not have a standards-setting body in place necessary for representation on ISO. These countries are automatically excluded from participating thereby losing the opportunity to contribute to initiatives that might be very important to their economic development (UNCTAD, 1996). As well, there is some apprehension that export markets for goods from developing countries could be lost if ISO 14001 becomes a requirement since many indigenous businesses in developing countries might not be able to afford ISO certifications or have reasonable access to auditors (UNCTAD, 1996). Several factors point to the likelihood that ISO 14000 will become increasingly important in business, policy, and trade. First, the example of ISO 9000 creating a domino effect through chains of integrated enterprises is put forth as a precursor of what will happen with ISO 14000 (Morelli, 1999). Second, the current trend of the state forfeiting its traditional regulatory role to the private sector and what is termed the ‘new infrastructure’ (Salter and Salter, 1997) creates an ISO-friendly environment. Third, trade relations are increasingly reliant on international, certifiable codes for quality assurance. ISO 14000 represents the environmental element in a tri-part assurance scheme for food products where HACCP for food safety and ISO 9000 for food quality constitute the other two. What remains for ISO 14000 to take hold is the added catalyst of public pressure for improved environmental responsibility worldwide in a manner similar to its effect in the mid to late 1980s. If and when this does occur, it is likely that major business interests and governments will turn to the ISO 14000 series as a ready-made solution for offering guarantees of responsible environmental management just as HACCP has been used to assuage fears of food safety. The agri-food industry therefore might be caught up in having to incorporate ISO 14000 before its value and/or implications are fully known.