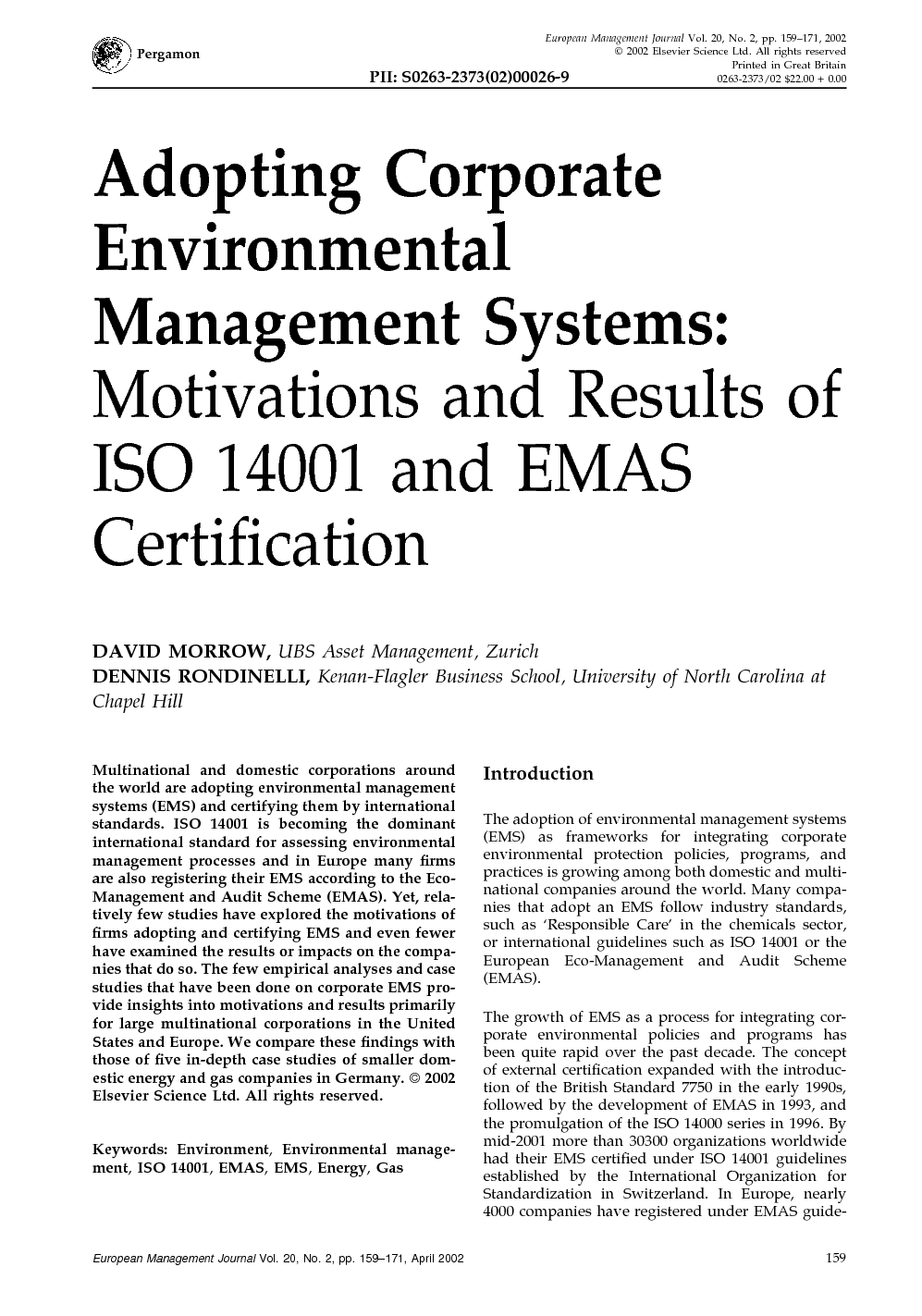 Multinational and domestic corporations around the world are adopting environmental management systems (EMS) and certifying them by international standards. ISO 14001 is becoming the dominant international standard for assessing environmental management processes and in Europe many firms are also registering their EMS according to the Eco-Management and Audit Scheme (EMAS). Yet, relatively few studies have explored the motivations of firms adopting and certifying EMS and even fewer have examined the results or impacts on the companies that do so. The few empirical analyses and case studies that have been done on corporate EMS provide insights into motivations and results primarily for large multinational corporations in the United States and Europe. We compare these findings with those of five in-depth case studies of smaller domestic energy and gas companies in Germany.

The adoption of environmental management systems (EMS) as frameworks for integrating corporate environmental protection policies, programs, and practices is growing among both domestic and multinational companies around the world. Many companies that adopt an EMS follow industry standards, such as ‘Responsible Care’ in the chemicals sector, or international guidelines such as ISO 14001 or the European Eco-Management and Audit Scheme (EMAS). The growth of EMS as a process for integrating corporate environmental policies and programs has been quite rapid over the past decade. The concept of external certification expanded with the introduction of the British Standard 7750 in the early 1990s, followed by the development of EMAS in 1993, and the promulgation of the ISO 14000 series in 1996. By mid-2001 more than 30300 organizations worldwide had their EMS certified under ISO 14001 guidelines established by the International Organization for Standardization in Switzerland. In Europe, nearly 4000 companies have registered under EMAS guidelines (Peglau, 2001). Other companies are adopting major components of industry or international standards for environmental management without formally certifying them. Eli Lilly (1999), the international pharmaceutical company, for example, uses the ISO 14001 framework to allow each of its international sites to develop an EMS and then decide if it should seek official certification. Many multinational corporations have designed, certified, and implemented environmental management systems under ISO 14001 because it provides a harmonized standard for managing a corporation’s environmental impacts (Tibor and Feldman, 1996). ISO 14001 is a set of guidelines by which a facility—a single plant or a whole organization—can establish or strengthen its environmental policy, identify environmental aspects of its operations, define environmental objectives and targets, implement a program to attain environmental performance goals, monitor and measure effectiveness, correct deficiencies and problems, and review its management systems to promote continuous improvement (Weaver, 1996). An increasing number of multinational corporations (MNCs) have adopted and certified their EMS. The Ford Motor Company was one of the first MNCs to embrace ISO 14001 series guidelines for all of its manufacturing facilities. By 1998, Ford had certified all 140 of its manufacturing plants in 26 countries, and by 1999 it was requiring that all its suppliers and manufacturing facilities worldwide also adopt and certify an EMS as a condition for continuing to do business with Ford (Wilson, 2001). General Motors, Daimler-Chrysler, Toyota and other automobile manufacturers are also requiring all of their manufacturing facilities around the world to adopt EMS and to certify them by international standards and encouraging and assisting their suppliers to do the same (Sabatini, 2000). In 1997, IBM (2000) received the first single worldwide ISO 14001 certification that covered corporate headquarters and 11 of its 28 plants that manufactured microelectronic technology, data storage systems, personal systems, servers and networking hardware. IBM certified the EMS of its 17 other sites in 1998 and added facilities in Thailand and Ireland in 1999. The Royal Dutch/Shell Group (2000) certified 90% of its major installations under ISO 14001 by 1999. Pharmaceutical company Bristol-Myers Squibb (2000) had 19 of its plants worldwide certified according to ISO 14001 standards by 2000 and now Bristol-Myers Squibb, Germany, informs hospitals how to implement ISO 14001-type environmental standards at their facilities. By 2000, more than 100 U.S. companies in the electronics and semiconductor industry had their EMS certified by ISO-14001 registrars (Sissel, 2000). As more corporations consider the possibilities of adopting an EMS and as they, government agencies, and environmental interest groups consider the implications of doing so, several questions arise for which answers are only beginning to emerge. First, is an EMS only a management tool that only large multinational corporations have the resources and incentives to adopt or can smaller domestic firms also benefit from developing and certifying an EMS? Second, what motivates corporations—large or small, domestic or multinational—to adopt an EMS and voluntarily comply with external standards for designing and implementing it? Third, do corporate motivations for adopting EMS vary from country to country? And, fourth, what are the results of implementing an EMS and how are companies impacted by certification? This article explores these questions by reviewing the literature on corporate environmental management systems and the relatively few empirical studies that have been done of their adoption and certification. We compare these findings with those of five in-depth case studies of energy and gas companies in Germany that are implementing environmental management systems. Investigation of the German companies in the energy and gas industry offers insights into why small- and medium-sized domestic German firms adopt and certify an EMS and the results they obtain from doing so. Germany was selected because of its large number of EMAS and ISO 14001 certifications. The energy and gas sector was chosen for study because of its major environmental impacts.