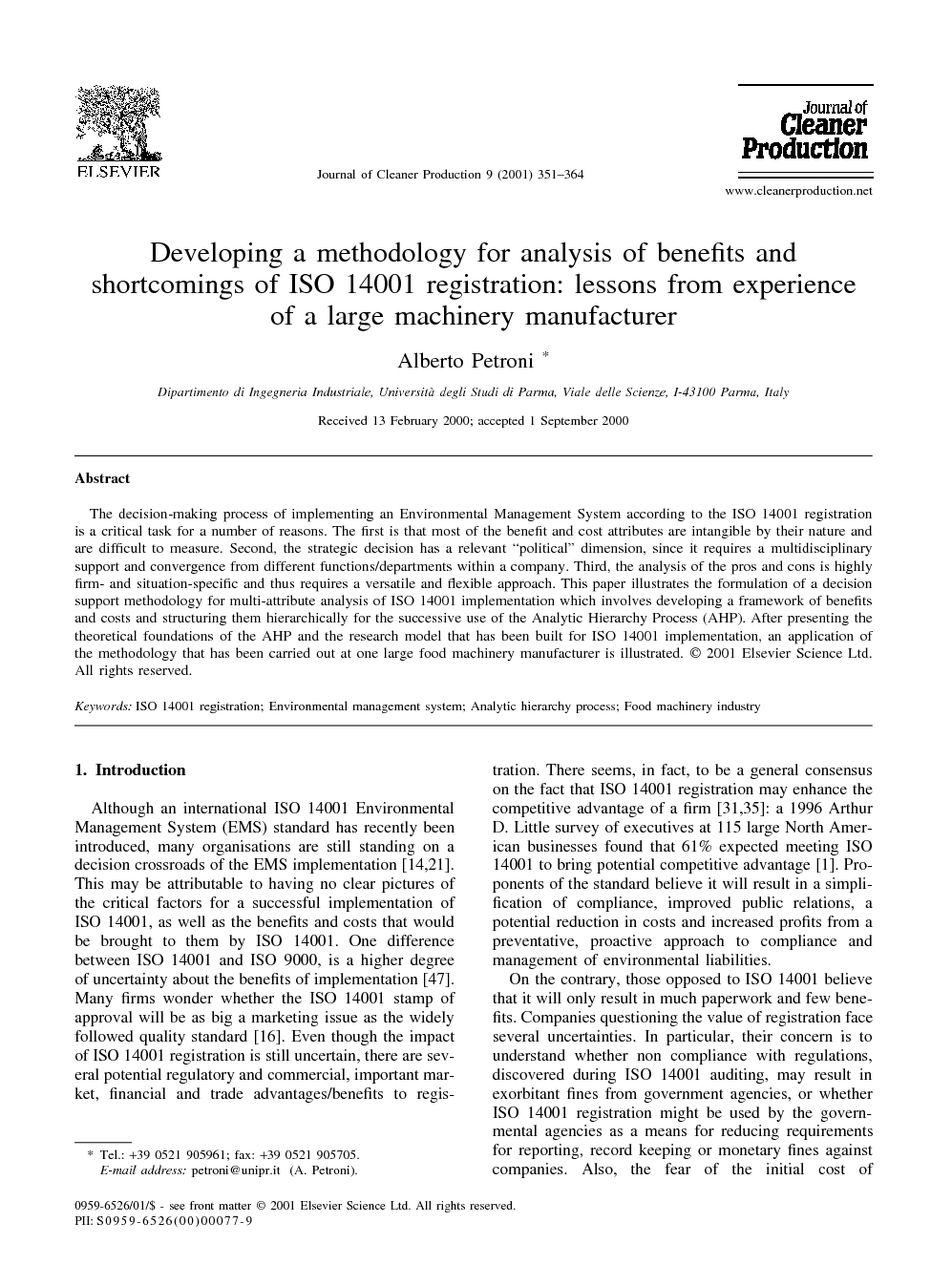 The decision-making process of implementing an Environmental Management System according to the ISO 14001 registration is a critical task for a number of reasons. The first is that most of the benefit and cost attributes are intangible by their nature and are difficult to measure. Second, the strategic decision has a relevant “political” dimension, since it requires a multidisciplinary support and convergence from different functions/departments within a company. Third, the analysis of the pros and cons is highly firm- and situation-specific and thus requires a versatile and flexible approach. This paper illustrates the formulation of a decision support methodology for multi-attribute analysis of ISO 14001 implementation which involves developing a framework of benefits and costs and structuring them hierarchically for the successive use of the Analytic Hierarchy Process (AHP). After presenting the theoretical foundations of the AHP and the research model that has been built for ISO 14001 implementation, an application of the methodology that has been carried out at one large food machinery manufacturer is illustrated.

Although an international ISO 14001 Environmental Management System (EMS) standard has recently been introduced, many organisations are still standing on a decision crossroads of the EMS implementation [14] and [21]. This may be attributable to having no clear pictures of the critical factors for a successful implementation of ISO 14001, as well as the benefits and costs that would be brought to them by ISO 14001. One difference between ISO 14001 and ISO 9000, is a higher degree of uncertainty about the benefits of implementation [47]. Many firms wonder whether the ISO 14001 stamp of approval will be as big a marketing issue as the widely followed quality standard [16]. Even though the impact of ISO 14001 registration is still uncertain, there are several potential regulatory and commercial, important market, financial and trade advantages/benefits to registration. There seems, in fact, to be a general consensus on the fact that ISO 14001 registration may enhance the competitive advantage of a firm [31] and [35]: a 1996 Arthur D. Little survey of executives at 115 large North American businesses found that 61% expected meeting ISO 14001 to bring potential competitive advantage [1]. Proponents of the standard believe it will result in a simplification of compliance, improved public relations, a potential reduction in costs and increased profits from a preventative, proactive approach to compliance and management of environmental liabilities. On the contrary, those opposed to ISO 14001 believe that it will only result in much paperwork and few benefits. Companies questioning the value of registration face several uncertainties. In particular, their concern is to understand whether non compliance with regulations, discovered during ISO 14001 auditing, may result in exorbitant fines from government agencies, or whether ISO 14001 registration might be used by the governmental agencies as a means for reducing requirements for reporting, record keeping or monetary fines against companies. Also, the fear of the initial cost of implementing an EMS can be discouraging to some organisations especially smaller companies [19]. For these reasons, the availability of analytical instruments supporting a sound evaluation of costs and benefits of ISO 14001 registration is of a great importance [28] and [44]. The rationale and the justification for investigating the viability and applicability of innovative decision-support methodologies to the environmental issues is to be traced back to a couple of main reasons: first, companies will decide to register only if it is in their own best interest, only if the decision maker can defend the decision to critics. Approaches to gain support within an organisation for implementation of ISO 14001 and to improve the chances of success once implementation has begun are, thus, critical [20]; since complying with ISO 14001 will involve input from multiple departments throughout the company, a business should tap talent from its firm. Chances for success without multidisciplinary support are remote, and any attempt to single-handedly build a business case for ISO 14001 without inter-disciplinary input will only alienate others [50]. However, the analysis and justification of investment in ISO 14001 are quite difficult and challenging tasks for a number of reasons. First, implementing ISO 14001 standards can be compared with an investment wherein most of the cost and benefit attributes are intangibles and are difficult to quantify [7]. Also the benefits and costs must be viewed from a strategic perspective. In fact, environmental managers need to prioritise environmental programs using the same criteria as the company as a whole [30]. To achieve broader benefits from environmental management investments, it has been shown how organisations must first develop a methodology for aligning their environmental management activities with the organisation's strategic business goals and create a plan for systematically managing continuous improvement to achieve these goals [10], [23], [24], [35] and [38]. In addition, organisations must implement this strategy at the business unit and facility level in a manner that integrates environmental management activities with the organisation's core business processes to achieve improved product and service performance [40]. Another source of difficulty is that even for those benefits that are seemingly measurable (e.g., environmental management cost-savings), it can be difficult for an organisation to conclude that the EMS alone is responsible for a given outcome given all the other changes occurring in the organisation. For example, one organisation may identify some specific environmental management cost-savings while implementing the EMS, without being able to identify to what extent EMS implementation is responsible for the improvement. Clearly the problem at hand involves a multi-attribute deterministic decision. One of the most effective approaches to such decisions is using the Analytic Hierarchy Process (AHP) [25]. The AHP organises feelings, intuition, and logic in a structured approach to decision making, which proves beneficial in an environment that has predominantly intangible attributes. AHP enables one to structure a system and its environment into mutually interacting elements and then to synthesise them by measuring and ranking the impact of these elements on the entire system. AHP is a methodology that has proven particularly effective as a decision-making tool. In particular, its methodological peculiarities have made the AHP approach a valuable instrument supporting the strategic decisional processes. These properties have made the AHP methodology quite popular and it has been effectively used in the analysis and justification of various investment scenarios as well as numerous decision problems involving corporate planning, marketing strategy, energy policies, project selection, budget allocation, and portfolio selection. This paper examines and discusses the critical factors for taking an ISO 14001 implementation decision in manufacturing industries. Furthermore, it explains the formulation of a methodology for multi-attribute analysis of ISO 14001 registration which involves developing cost and benefit attribute sets and structuring them hierarchically for analysis by the AHP. The methodology has been successfully applied at one large manufacturer of food machinery. Based on the above premises, the structure of the paper is as follows: Section 2 introduces the ISO 14001 system standards, Section 3 discusses the benefits and drawbacks of the registration as presented in the literature, Section 4 provides an overview of the analytic hierarchic process and finally Section 5 is devoted to the illustration of the results of the application of such a methodology to the specific case investigated.

In this paper, a multi-attribute evaluation technique for the analysis and justification of investment in the ISO 14001 quality system has been proposed. More specifically, the AHP approach to the ISO 14001 registration decision problem facing a firm which primarily manufactures mechanical components for the food machinery industry has been applied. In order to do so, an overview of the ISO 14001 quality system standard and its strategic impact to the firm's operations has been first presented. Then, the need for the analysis/justification of investment in ISO 14001 has been addressed. The development of cost and benefit attribute set for ISO 14001 registration is the third significant step of this research. The model is simple to use and is flexible in its application. The model has been successfully applied with data from a large company that is already ISO 14001 registered. For companies already registered under ISO 14001, the research model provides a methodology to analyse/justify the implications of registration. This allows the companies to assess the state of their quality system before and after implementing ISO 14001. For companies pursuing ISO 14001 registration, the model is a helpful tool to analyse the potential costs and benefits of registration and to re-emphasise their commitment to registration. Although the model is generic in its application, the structure and hierarchy of the model can be easily changed to incorporate specific attributes. The model has shown itself to be capable of handling multiple conflicting objectives such as the maximisation of service to customers and the minimisation of implementation cost. Consequently, the model can be a valid aid to analysing various trade-offs and evaluating the implications of strategic decisions.