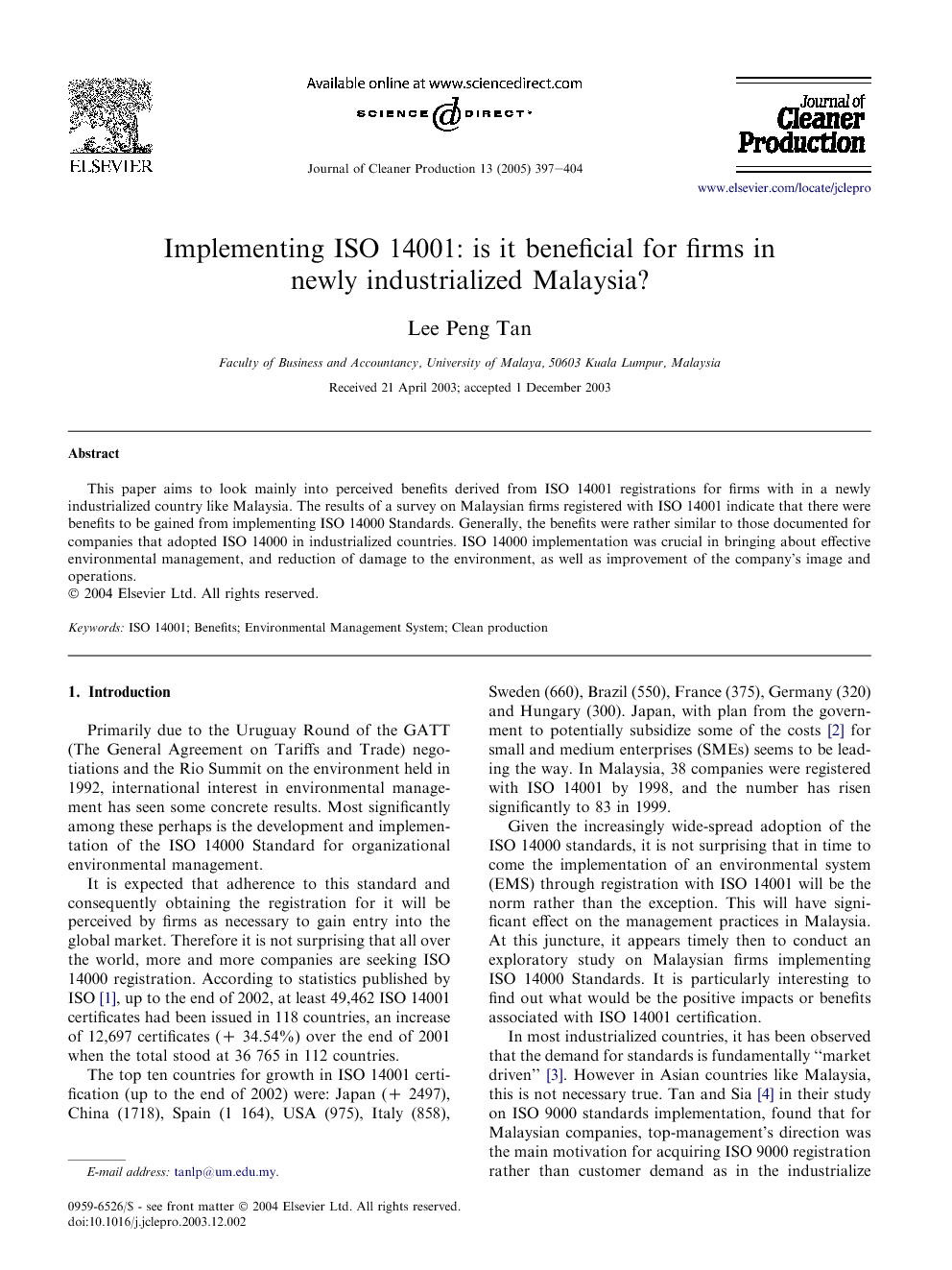 This paper aims to look mainly into perceived benefits derived from ISO 14001 registrations for firms with in a newly industrialized country like Malaysia. The results of a survey on Malaysian firms registered with ISO 14001 indicate that there were benefits to be gained from implementing ISO 14000 Standards. Generally, the benefits were rather similar to those documented for companies that adopted ISO 14000 in industrialized countries. ISO 14000 implementation was crucial in bringing about effective environmental management, and reduction of damage to the environment, as well as improvement of the company's image and operations.

Primarily due to the Uruguay Round of the GATT (The General Agreement on Tariffs and Trade) negotiations and the Rio Summit on the environment held in 1992, international interest in environmental management has seen some concrete results. Most significantly among these perhaps is the development and implementation of the ISO 14000 Standard for organizational environmental management. It is expected that adherence to this standard and consequently obtaining the registration for it will be perceived by firms as necessary to gain entry into the global market. Therefore it is not surprising that all over the world, more and more companies are seeking ISO 14000 registration. According to statistics published by ISO [1], up to the end of 2002, at least 49,462 ISO 14001 certificates had been issued in 118 countries, an increase of 12,697 certificates (+ 34.54%) over the end of 2001 when the total stood at 36 765 in 112 countries. The top ten countries for growth in ISO 14001 certification (up to the end of 2002) were: Japan (+ 2497), China (1718), Spain (1 164), USA (975), Italy (858), Sweden (660), Brazil (550), France (375), Germany (320) and Hungary (300). Japan, with plan from the government to potentially subsidize some of the costs [2] for small and medium enterprises (SMEs) seems to be leading the way. In Malaysia, 38 companies were registered with ISO 14001 by 1998, and the number has risen significantly to 83 in 1999. Given the increasingly wide-spread adoption of the ISO 14000 standards, it is not surprising that in time to come the implementation of an environmental system (EMS) through registration with ISO 14001 will be the norm rather than the exception. This will have significant effect on the management practices in Malaysia. At this juncture, it appears timely then to conduct an exploratory study on Malaysian firms implementing ISO 14000 Standards. It is particularly interesting to find out what would be the positive impacts or benefits associated with ISO 14001 certification. In most industrialized countries, it has been observed that the demand for standards is fundamentally “market driven”. [3]. However in Asian countries like Malaysia, this is not necessary true. Tan and Sia [4] in their study on ISO 9000 standards implementation, found that for Malaysian companies, top-management's direction was the main motivation for acquiring ISO 9000 registration rather than customer demand as in the industrialize countries. We suspect this may be the same with ISO 14000. Thus, a comparison of findings in Malaysia with that of other countries will also be included. The next section includes a brief survey of the benefits derived from implementing ISO 14000 Standards reported by firms in the industrialized countries. This is followed by a discussion on the results obtained from a survey on a sample of Malaysian firms that have been successfully registered with ISO 14000 standards. The paper concludes with a comparison between benefits gained by firms in Malaysia and those in industrialized countries. Throughout this paper, the terms ISO 9000 and ISO 14000 will be loosely used, to refer to certification of ISO 9001, 9002, 9003 (which is dependence on the scope of the activities certified) and certification of an environmental management system to the ISO 14001.

A review of the perceived benefits reported by firms certified with ISO 14001 in industrialized countries was presented. This was followed by a discussion of the results from a survey performed on Malaysian companies registered with ISO 14000. The majority of the companies surveyed were in the electrical and electronic industry. All these companies agreed that they had benefited greatly from implementing ISO 14000 systems. There were no significant differences in the environmental policies and practices among these companies. As for the benefits arising from registration, regardless of the motives, it was generally agreed that as has been found in industrialized countries, ISO 14000 was crucial in bringing about effective environmental management, and reduction of damage to the environment, as well as for the improvement of the company's image. In many ways, the Malaysian companies surveyed reported similar benefits as their counterparts in other countries after obtaining ISO 14001 registrations. They were perceived to be moving towards achieving clean/green and more efficient operations. For these, they believed they were rewarded with an expanded market, improvement in company image and improvement in management. Hence the contention that ISO14000 is not achieving what it is intended to achieve, is definitely not true. As witnessed in this study, firms starting with vastly different intentions and anticipations had ultimately perceived themselves to benefit from its implementation. Of utmost importance is that there were suggestions that the environmentally related benefits had also ‘spilled over’ to the community at large. This is particularly important for newly industrialized countries where clear policy on sustainable development is lacking or where there is a very serious shortage of environmental engineering skills [35]. In some areas, there are differences between the Malaysian firms surveyed and those in industrialised countries. The most significant difference is in the reasons for seeking registration. The survey revealed that most Malaysian pursued ISO 14001 registration with insistence from top management rather than because of customer's demand or the often cited cost-saving reasons. Nonetheless, the Malaysian companies studied, did not seem to have paid attention to areas like enhanced employee empowerment, improved relationships with stakeholders, or improved production of competitive products/services, as compared to those in industrialized countries. Their experiences were more similar to those of Asian countries like Hong Kong and Singapore than with those of developed countries. Further study is necessary to establish if this has to do with the culture or other managerial factors such as managerial traits, or value system.