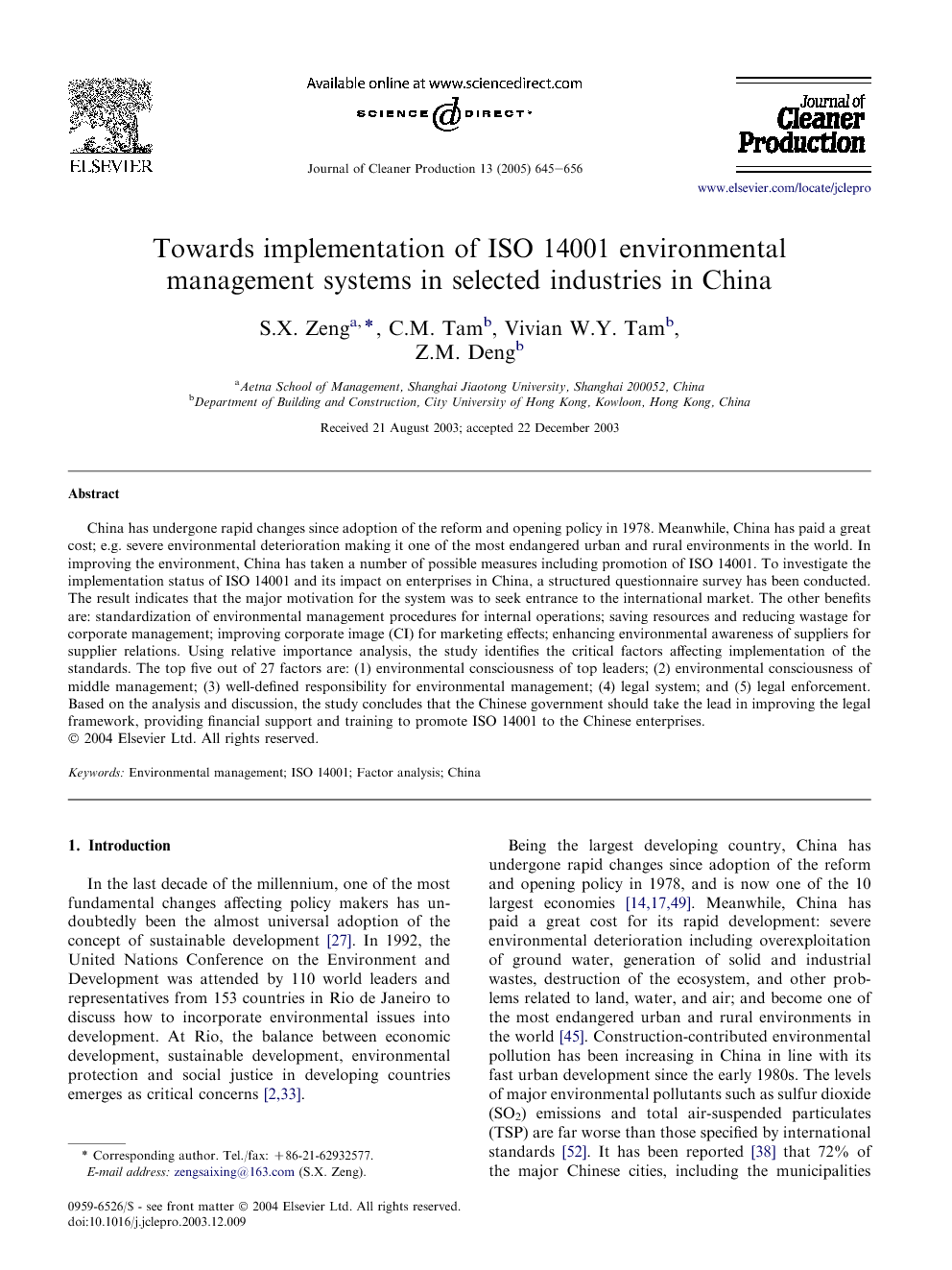 China has undergone rapid changes since adoption of the reform and opening policy in 1978. Meanwhile, China has paid a great cost; e.g. severe environmental deterioration making it one of the most endangered urban and rural environments in the world. In improving the environment, China has taken a number of possible measures including promotion of ISO 14001. To investigate the implementation status of ISO 14001 and its impact on enterprises in China, a structured questionnaire survey has been conducted. The result indicates that the major motivation for the system was to seek entrance to the international market. The other benefits are: standardization of environmental management procedures for internal operations; saving resources and reducing wastage for corporate management; improving corporate image (CI) for marketing effects; enhancing environmental awareness of suppliers for supplier relations. Using relative importance analysis, the study identifies the critical factors affecting implementation of the standards. The top five out of 27 factors are: (1) environmental consciousness of top leaders; (2) environmental consciousness of middle management; (3) well-defined responsibility for environmental management; (4) legal system; and (5) legal enforcement. Based on the analysis and discussion, the study concludes that the Chinese government should take the lead in improving the legal framework, providing financial support and training to promote ISO 14001 to the Chinese enterprises.

In the last decade of the millennium, one of the most fundamental changes affecting policy makers has undoubtedly been the almost universal adoption of the concept of sustainable development [27]. In 1992, the United Nations Conference on the Environment and Development was attended by 110 world leaders and representatives from 153 countries in Rio de Janeiro to discuss how to incorporate environmental issues into development. At Rio, the balance between economic development, sustainable development, environmental protection and social justice in developing countries emerges as critical concerns [2] and [33]. Being the largest developing country, China has undergone rapid changes since adoption of the reform and opening policy in 1978, and is now one of the 10 largest economies [14], [17] and [49]. Meanwhile, China has paid a great cost for its rapid development: severe environmental deterioration including overexploitation of ground water, generation of solid and industrial wastes, destruction of the ecosystem, and other problems related to land, water, and air; and become one of the most endangered urban and rural environments in the world [45]. Construction-contributed environmental pollution has been increasing in China in line with its fast urban development since the early 1980s. The levels of major environmental pollutants such as sulfur dioxide (SO2) emissions and total air-suspended particulates (TSP) are far worse than those specified by international standards [52]. It has been reported [38] that 72% of the major Chinese cities, including the municipalities and the provincial capitals, have a level of TSP over 200 mg/m3, compared to a standard of 90 mg/m3 laid down by the World Health Organization [48]. Due to the high rate of population growth, the transitional economy system, massive urbanization, growing regional administrative autonomy which has not been accompanied by the effective implementation of government policy and control especially in relation to environmental protection, and absence of environmental pressure groups and general awareness, tensions between development and the environment in China are particularly acute [7]. The construction industry has undergone great changes due to rapid industrialization and urbanization during the past two decades. Pollution resulted from construction activities has become a serious problem. Pollution and hazards do not only annoy residents nearby, but also affect the health and well-being of people in the entire city [10]. For example, in big cities such as Shanghai and Beijing, air quality has been deteriorating due to extensive urban redevelopment activities. From the analysis of Chen et al. [10], sources of pollution and hazards from construction activities can be divided into seven major types: dust, harmful gases, noises, solid and liquid wastes, fallen objects, ground movements, and others. The causes of pollution and the corresponding preventive methods to these seven major types of pollution in the construction industry are shown in Table 1.In order to tackle the environmental problems, the Chinese government has, thus, enacted laws on environment protection such as the ratification of Environment Protection Act, Water Pollution Protection Act, Air Pollution Protection Act, Solid Wastage Pollution Protection Act and Noise Pollution Protection Act. Those ordinances will provide guidelines for those practitioners to tighten up environmental protection. In response to the significant impacts on the environment, the Chinese government has stepped in by enacting laws and acts on environmental protection, funding state-owned large and medium-sized enterprises in technological overhaul for reducing sources of pollution and hazards [46], and closing down numerous small-sized enterprises with obsolete technology and setup [13]. Moreover, the Chinese government has been strongly promoting the implementation of ISO 14001. By August 2001, 836 organizations had obtained ISO 14001 certification in China, among which the electronic and communication equipment sector is ranked first and occupied 71%, while the manufacturing sector is ranked second at 7% [8] and [12]. The certification exercise shows a unique characteristic: most of the certified enterprises are located in the more developed eastern regions, with only a few located inland. However, the legal system in China is immature, the enforcements in environmental protection are not strong [28] and the environmental consciousness of the public is low [47]. Thus, improvement of the environmental management in China is no doubt an onerous task. Using a structured questionnaire survey, this paper investigated the impact of ISO 14001. The main objectives were to: (i) evaluate the status quo of implementation of ISO 14001, (ii) examine motivation and benefits of the certification exercise, (iii) explore difficulties in the implementation; (iv) identify the critical factors affecting the implementation, and (v) propose ways of promoting the adoption of the standards among the Chinese enterprises.

China has undergone rapid changes since the reform and opening policy in 1978 and is now one of the 10 largest economies in the world. Meanwhile, China has paid a great cost for its rapid development e.g. severe environmental deterioration and become one of the world's most endangered urban and rural environments. To improve the environment, China has taken some measures including promotion of implementation of the ISO 14001 standard series within industrial firms. Based on a structured questionnaire survey on the impact of ISO 14001 standards on enterprises in China, it revealed that the major motivation for implementing the system was to seek entrance to the international market. The main benefits that have resulted from implementation of the standards are: • standardization of environmental management procedures for internal operations; • saving resources and reducing wastage for corporate management; • improving corporate image (CI) for marketing efforts; • enhancing environmental awareness throughout the supply chain; and • obvious improvements in cleaner production. Using the relative importance analysis, the study identified the critical factors affecting implementation of the standards. The top five out of 27 factors are: environmental consciousness of top leaders; consciousness of middle management; well-defined responsibility on environmental management; legal system; and legal enforcement. By improving the current performance on environmental management in China, the government should play an important role in promoting environmental management. It is necessary for the government to provide active support in the following three aspects: • Mandatory policy—establishment of a proper legal structure and related regulations for promoting ISO 14001; • Encouraging policy—provision of soft loans or short-term subsidies to the construction industry; and • Supporting policy—training the leaders of construction firms to arouse their environmental awareness. As this study is based upon data from small samples of each industrial sector, constrains the statistical reliability in comparing different sectors, which forms the major limitation of this study. This is an issue for future research.