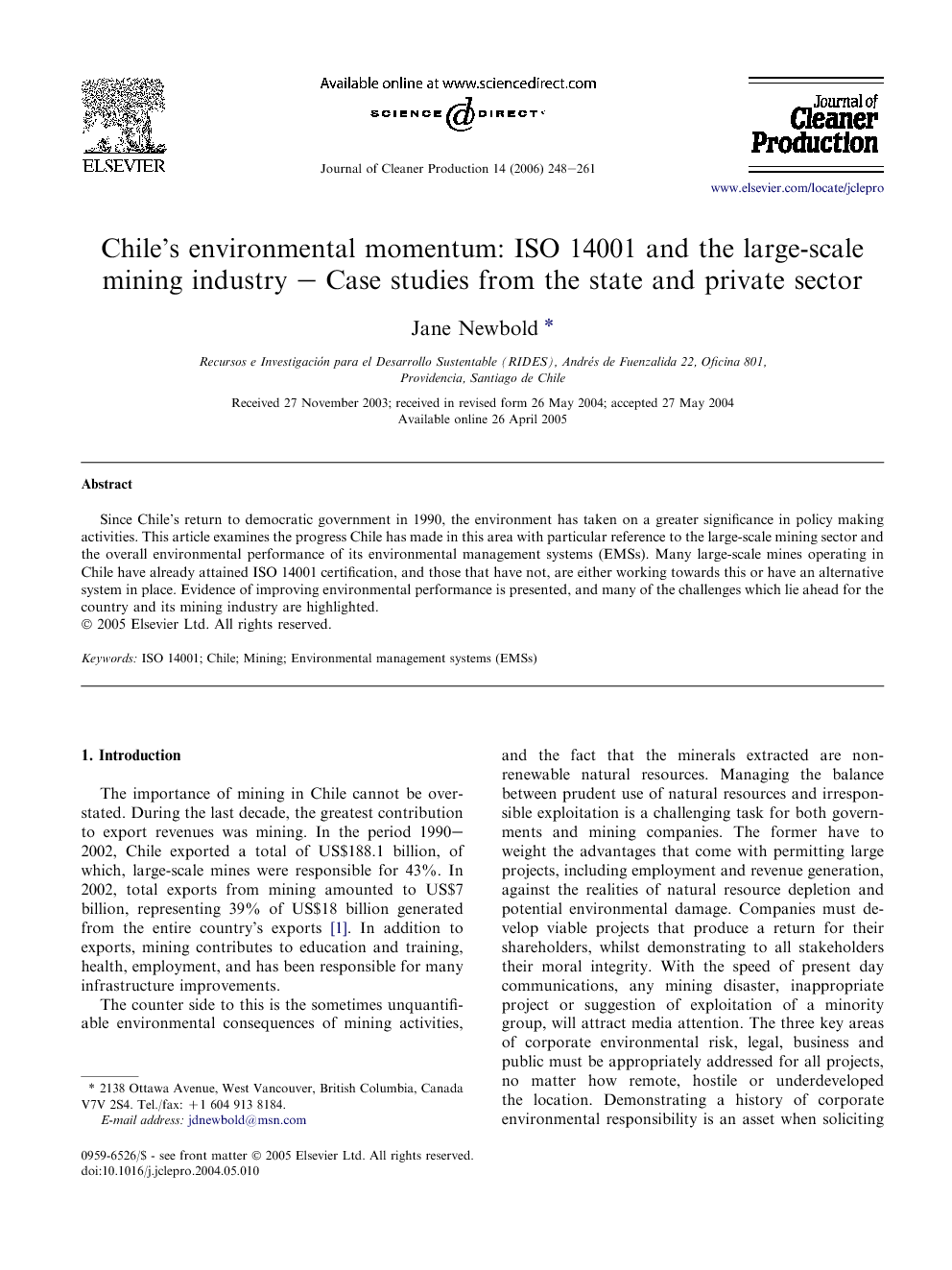 Since Chile's return to democratic government in 1990, the environment has taken on a greater significance in policy making activities. This article examines the progress Chile has made in this area with particular reference to the large-scale mining sector and the overall environmental performance of its environmental management systems (EMSs). Many large-scale mines operating in Chile have already attained ISO 14001 certification, and those that have not, are either working towards this or have an alternative system in place. Evidence of improving environmental performance is presented, and many of the challenges which lie ahead for the country and its mining industry are highlighted.

The importance of mining in Chile cannot be overstated. During the last decade, the greatest contribution to export revenues was mining. In the period 1990–2002, Chile exported a total of US$188.1 billion, of which, large-scale mines were responsible for 43%. In 2002, total exports from mining amounted to US$7 billion, representing 39% of US$18 billion generated from the entire country's exports [1]. In addition to exports, mining contributes to education and training, health, employment, and has been responsible for many infrastructure improvements. The counter side to this is the sometimes unquantifiable environmental consequences of mining activities, and the fact that the minerals extracted are non-renewable natural resources. Managing the balance between prudent use of natural resources and irresponsible exploitation is a challenging task for both governments and mining companies. The former have to weight the advantages that come with permitting large projects, including employment and revenue generation, against the realities of natural resource depletion and potential environmental damage. Companies must develop viable projects that produce a return for their shareholders, whilst demonstrating to all stakeholders their moral integrity. With the speed of present day communications, any mining disaster, inappropriate project or suggestion of exploitation of a minority group, will attract media attention. The three key areas of corporate environmental risk, legal, business and public must be appropriately addressed for all projects, no matter how remote, hostile or underdeveloped the location. Demonstrating a history of corporate environmental responsibility is an asset when soliciting approval for new ventures. Certification to an internationally accredited environmental management system is one way of demonstrating that a company takes its responsibilities seriously.

Mining is Chile's major industry, accounting for about 40% of national exports. The large-scale mines provide the greater part of this 40% and are both state- and privately-owned. The state mines are mostly older with associated pollution problems whilst the majority of the privately-owned mines commenced operation within the last 15 years and have the benefit of newer technologies. Despite the different starting blocks, both state and privately owned mining companies have embraced the environmental challenges of the industry. With the return to democracy in 1990, the Chilean government brought in new environmental laws and regulations, and the combination of industry and government has meant that Chile has not only risen to the these challenges, but is also showing itself to be a world leader on the environmental mining front. The great value of an EMS for mining has been to provide a platform for the training and heightened awareness of large number of workers in a relatively dangerous industry. Certification to an international standard such as ISO 14001 demonstrates a level of commitment to employees, clients, stakeholders, backers and other countries. This can help future financing and acceptance of new projects. Certification initiatives in Chile began about four years ago for both quality and environmental systems, and have been seen to be crucial in the context of trade agreements [21]. Many companies may have informal systems in place, but of the 22 largest mines in Chile, 12 are ISO 14001 certified and at least another four are committed to be certified by 2004–2005. To gain accreditation is a great achievement but it is possible to lose it if there are serious non-compliance issues. This, in many ways, is more damaging to a company than not having ever reached the standard in the first place. Large investments have been made by the industry in the last 10–15 years in terms of time, money and training, in an effort to protect the safety of workers and the environment. Some of the achievements that have occurred include decreased sulphur dioxide emissions, reduced emissions of arsenic and particulate matter around the large smelters, and reduced water and energy usage. An indirect indicator of improved environmental standards is the declining indices of frequency of accidents at large-scale mines. However, despite these improvements, there is still much more that could be done. CODELCO identified this need in 2002, and responded by setting out a series of objectives, including ensuring that by the year 2005, each of its smelter would capture at least 95% of prescribed contaminants (i.e. particulate matter, arsenic and sulphur dioxide). It is to be hoped that the year on year requirement of ISO 14001 for continual environmental improvements will maintain the momentum for companies to reduce the negative effect they have on the environment. The reasons for gaining ISO 14001 certification are different for the state and private companies. The most significant improvements have been gained by CODELCO, with many older facilities and diverse operations, including open and underground mines and smelters. CODELCO felt that certification would: • Give swifter approval for new investment in Chile; • Maintain and approve acceptance of products in the worldwide market place; • Allow it to position itself amongst the great world corporations; • Provide an excellent indicator of the standard and attitude of the country; and • Gain client approval. These changes were important for investment opportunities, and were necessary to establish the company as a world leader. Escondida, the world's largest copper mine, was the first mining company to gain certification to ISO 14001, with all sections of operation being accredited by 2003. The company wanted to remain a leading force on environmental issues in Chile. It has used ISO 14001 accreditation as the starting point to initiate a programme to encourage the implementation of an EMS along the supply chain, working with small- to medium-sized companies; after initial teething problems, it has had some success. Escondida has formed strong links with the community and established a foundation to support health and education programmes. Zaldivar has from the beginning, taken a strong stand on environmental issues. A total quality management programme has been in place from the beginning and from this the culture of developing systems from within has grown. This provides its workers with a sense of ownership and uses in-house skills in finding solutions to problems. The company has a very positive interaction with local communities and stakeholders on many fronts, including education and health. Commercial clients have not specifically requested ISO 14001 but attaining this accreditation has demonstrated the commitment of the company to the workforce, the community and its customers. The evidence presented in this article demonstrates how the large-scale mining operations in Chile have addressed their corporate environmental responsibilities, not just working towards an international EMS, but going further. Improvements in environmental performance are the accepted norm, safety has the highest priority, and sustainability, once thought to be a term incompatible with an extractive industry, is now a part of mining life. Gone are the days when the assumption that mining was a dirty and dangerous occupation was acceptable. Now it has to be safe, use the best available technology, and must demonstrate care and consideration for the environment and communities.