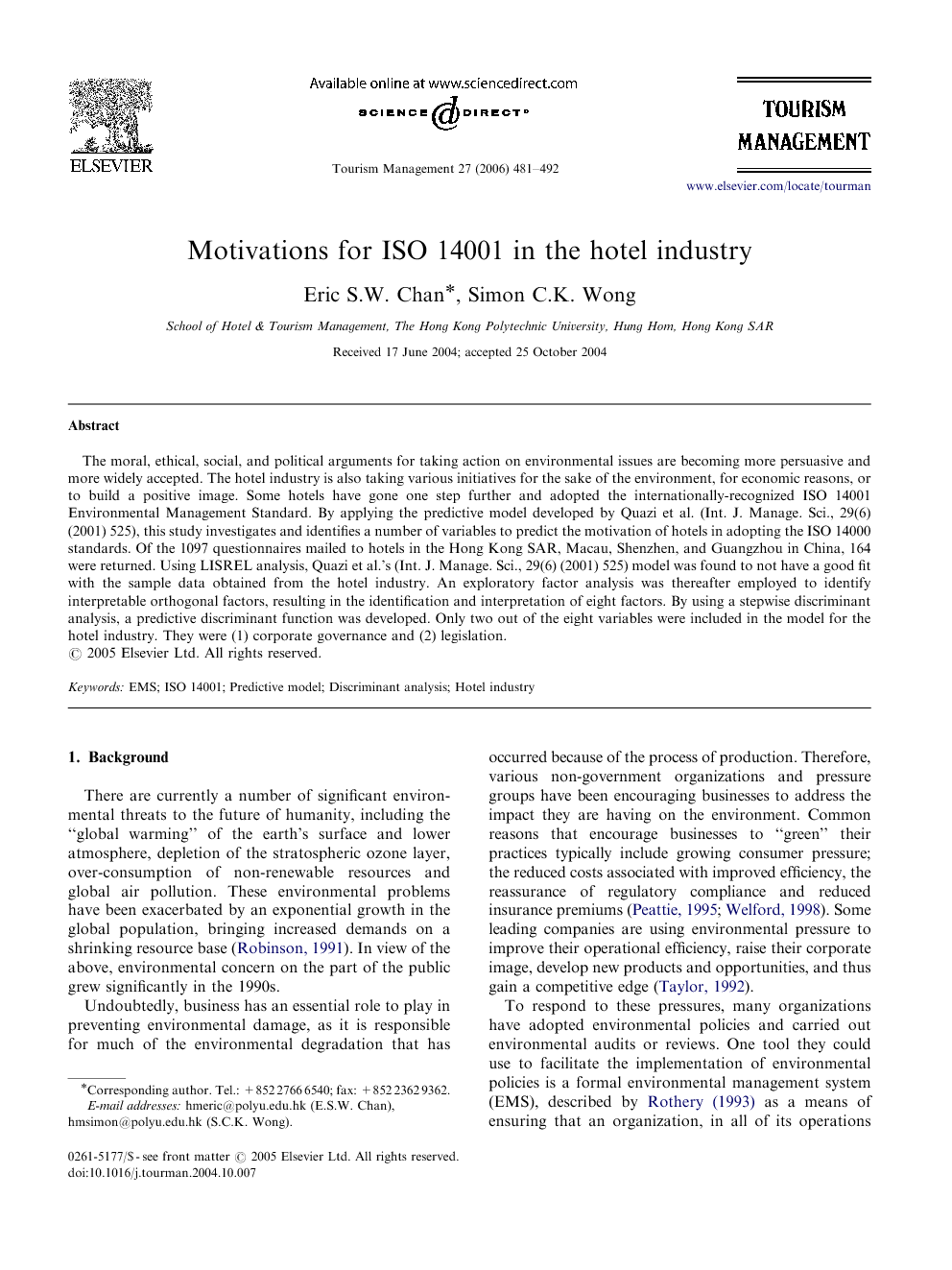 The moral, ethical, social, and political arguments for taking action on environmental issues are becoming more persuasive and more widely accepted. The hotel industry is also taking various initiatives for the sake of the environment, for economic reasons, or to build a positive image. Some hotels have gone one step further and adopted the internationally-recognized ISO 14001 Environmental Management Standard. By applying the predictive model developed by Quazi et al. (Int. J. Manage. Sci., 29(6) (2001) 525), this study investigates and identifies a number of variables to predict the motivation of hotels in adopting the ISO 14000 standards. Of the 1097 questionnaires mailed to hotels in the Hong Kong SAR, Macau, Shenzhen, and Guangzhou in China, 164 were returned. Using LISREL analysis, Quazi et al.'s (Int. J. Manage. Sci., 29(6) (2001) 525) model was found to not have a good fit with the sample data obtained from the hotel industry. An exploratory factor analysis was thereafter employed to identify interpretable orthogonal factors, resulting in the identification and interpretation of eight factors. By using a stepwise discriminant analysis, a predictive discriminant function was developed. Only two out of the eight variables were included in the model for the hotel industry. They were (1) corporate governance and (2) legislation.

There are currently a number of significant environmental threats to the future of humanity, including the “global warming” of the earth's surface and lower atmosphere, depletion of the stratospheric ozone layer, over-consumption of non-renewable resources and global air pollution. These environmental problems have been exacerbated by an exponential growth in the global population, bringing increased demands on a shrinking resource base (Robinson, 1991). In view of the above, environmental concern on the part of the public grew significantly in the 1990s. Undoubtedly, business has an essential role to play in preventing environmental damage, as it is responsible for much of the environmental degradation that has occurred because of the process of production. Therefore, various non-government organizations and pressure groups have been encouraging businesses to address the impact they are having on the environment. Common reasons that encourage businesses to “green” their practices typically include growing consumer pressure; the reduced costs associated with improved efficiency, the reassurance of regulatory compliance and reduced insurance premiums (Peattie, 1995; Welford, 1998). Some leading companies are using environmental pressure to improve their operational efficiency, raise their corporate image, develop new products and opportunities, and thus gain a competitive edge (Taylor, 1992). To respond to these pressures, many organizations have adopted environmental policies and carried out environmental audits or reviews. One tool they could use to facilitate the implementation of environmental policies is a formal environmental management system (EMS), described by Rothery (1993) as a means of ensuring that an organization, in all of its operations and activities, conforms to environmental targets set by its policy, which itself relates to standards set by directives or other criteria. EMS has become enshrined in international standards such as the EU eco-management and audit scheme (EMAS) and the International Organization for Standardization's standard for environmental management systems ISO 14001. The hospitality industry does not grossly pollute the environment, nor does it consume vast amounts of non-renewable resources, but it does have a significant effect on global resources (Kirk, 1995). The industry also has a vested interest in protecting the environment, since it depends on attractive and safe surroundings as a part of the core product. Because of this, many hotels in Hong Kong have started to implement EMS systematically or informally, while some deluxe hotels such as the Island Shangri-La Hotel, the Kowloon Shangri-La Hotel, Hotel Nikko, and the Grand Stanford Inter-Continental Hong Kong have achieved ISO 14001 accreditation. The same trend is also occurring in China. For instance, the Mission Hills Resort in Shenzhen has the certificate, while other hotels such as the World Trade Center Grand Hotel Zhejiang in Hangzhou is preparing for accreditation. It is suggested that implementing EMS can bring benefits to a company not only in financial terms through a reduction in energy costs and other resources, but also in terms of improving the company's image with the general public and other stakeholders (Hemenway & Hale, 1995). Research undertaken by the Steigenberger Reservation Service in 1994 also found that 20% of the surveyed hotels had initiated green measures because of financial considerations, 20% were motivated by guest concerns, and 30% by municipal regulations. However, the real motive of the hotels in gaining accreditation is not clear. Some may adopt the standard to improve their environmental performance, but others may want to utilize it to gain a marketing advantage. The targets an organization sets itself through an EMS may represent “environmental tokenism” rather than a solid commitment to decreasing the impact on the environment (Shayler, Welford, & Shayler, 1994). Therefore, in this study, we attempt to: (1) validate a predictive model previously developed by Quazi, Khoo, Tan, and Wong (2001) to predict the intentions of a hotel in seeking ISO 14001 certification, and (2) identify the motivators that may trigger a hotel to adopt the standard. 1.1. What is ISO 14001? International ISO 14000 standards were developed mainly in response to the proliferation of national EMS standards in various countries, which forced companies to deal with dozens of potentially incompatible systems from each country in which they conducted business (Tibor & Feldman, 1996). The ISO is a non-governmental organization established in 1947 to develop worldwide standards to improve international communication and collaboration, and to facilitate the international exchange of goods and services. ISO is a federation of about 100 national standards bodies representing 95% of the world's industrial production. In 1993, the ISO established a Technical Committee TC207 comprised of six subcommittees and numerous working groups to develop ISO 14000 series standards in environmental management. The ISO 14000 series standards consist of 20 environmental standards that are voluntary and process-based (Barnes, 1996; Hersey, 1998). The family of standards includes the (1) ISO 14001—EMS: specifications with guidance for use, (2) ISO 14004—EMS: general guidelines on principles, systems, and supporting techniques, (3) ISO 14010—guidelines for environmental auditing: general principles, (4) ISO 14011—guidelines for environmental auditing: audit procedures, (5) ISO 14012—guidelines for environmental auditing: qualification criteria for environmental auditors, (6) ISO 14024—environmental labeling, (7) ISO 14040—life cycle assessment, and (8) ISO 14060—guide for the inclusion of environmental aspects in product standards. Of the above series, ISO 14001 is the only standard against which an organization can become certified for EMS. As shown in Fig. 1, the ISO 14001 EMS consists of five core principles: (1) environmental policy, (2) planning, (3) implementation and operation, (4) checking and corrective action, and (5) management review. To meet these principles, hotels that hope to be accredited with the standard, will need to carry out the following:1. Environmental policy—develop a clear and committed policy on environmental protection, including the commitment to comply with relevant environmental legislation and regulations, and to make continual efforts to improve; 2. Planning—analyze the macro and micro aspects in the planning stage; 3. Implementation and operation—develop a structure and a set of responsibilities, training procedures, operational controls, and documentation; 4. Checking and corrective action—monitor performance against possible future legislative requirements and take corrective and preventive action in cases of non-conformance; and 5. Management review—review the EMS at pre-determined intervals to cater to the changes and needs of environmental policy.

There have been few studies on the motivation to adopt ISO 14001 in the hotel industry. Although many hotels have developed their EMS, others are still standing at the crossroads of making a decision. This study has identified eight associated motivational factors that may prompt a hotel to adopt the internationally recognized EMS standard—ISO 14001. These motivational factors indicate that the motivation for the adoption of the standard is determined more by internal forces than by external forces. This result is not surprising, since the hotel industry, which is normally not perceived as destroyer of the environment when compared with other manufacturing industries, is less influenced by stakeholders interested in a company's environmental performance, such as customers, suppliers, communities, local authorities, and so forth. More importantly, this research has generated the following two salient factors for predicting whether or not a hotel intends to obtain the certification: corporate governance and legislation. A hotel's corporate office may adopt the ISO standard for various reasons, which may require further investigation. But it unquestionably has a role in pushing its hotel properties to get certified. This suggests that environmental consulting firms should focus on promoting the ISO 14001 standard to the hotel's corporate office, as it is this office that will largely determine whether or not a hotel should proceed to obtain the certification. On the other hand, although there is no guarantee that a certified hotel will always remain in regulatory compliance, adopting an ISO standard is one of the best ways of complying with environmental protection legislation, and hoteliers are more likely to get certified if encouraged/required to by the government. Apart from setting penalties and enacting legislation, the authors think that it is important for governments to understand the real motives of companies and develop promotional strategies accordingly to encourage hotels to adopt ISO 14001 for the sake of the environment. Governments can promote and emphasize the various financial benefits that can be obtained from the standard and encourage adoption by offering economic incentives such as taxes or levies on emissions. The authors hope that the information presented in this paper will not only encourage hotel managers to adopt the ISO 14001 standard in this competitive business environment, but also give some insights into whether governments should encourage hotel operators to adopt the EMS standard. We also suggest that further studies can be conducted on budget class or three-star hotels, as the size of the sample in this study was not large enough for us to investigate the difference between deluxe and budget class hotels. One limitation of this study is the relatively small size of our sample of ISO-certified hotels, which may have influenced the results of the classification in the discriminant function. However, the 60% achieved in this study can still be considered an acceptable figure.