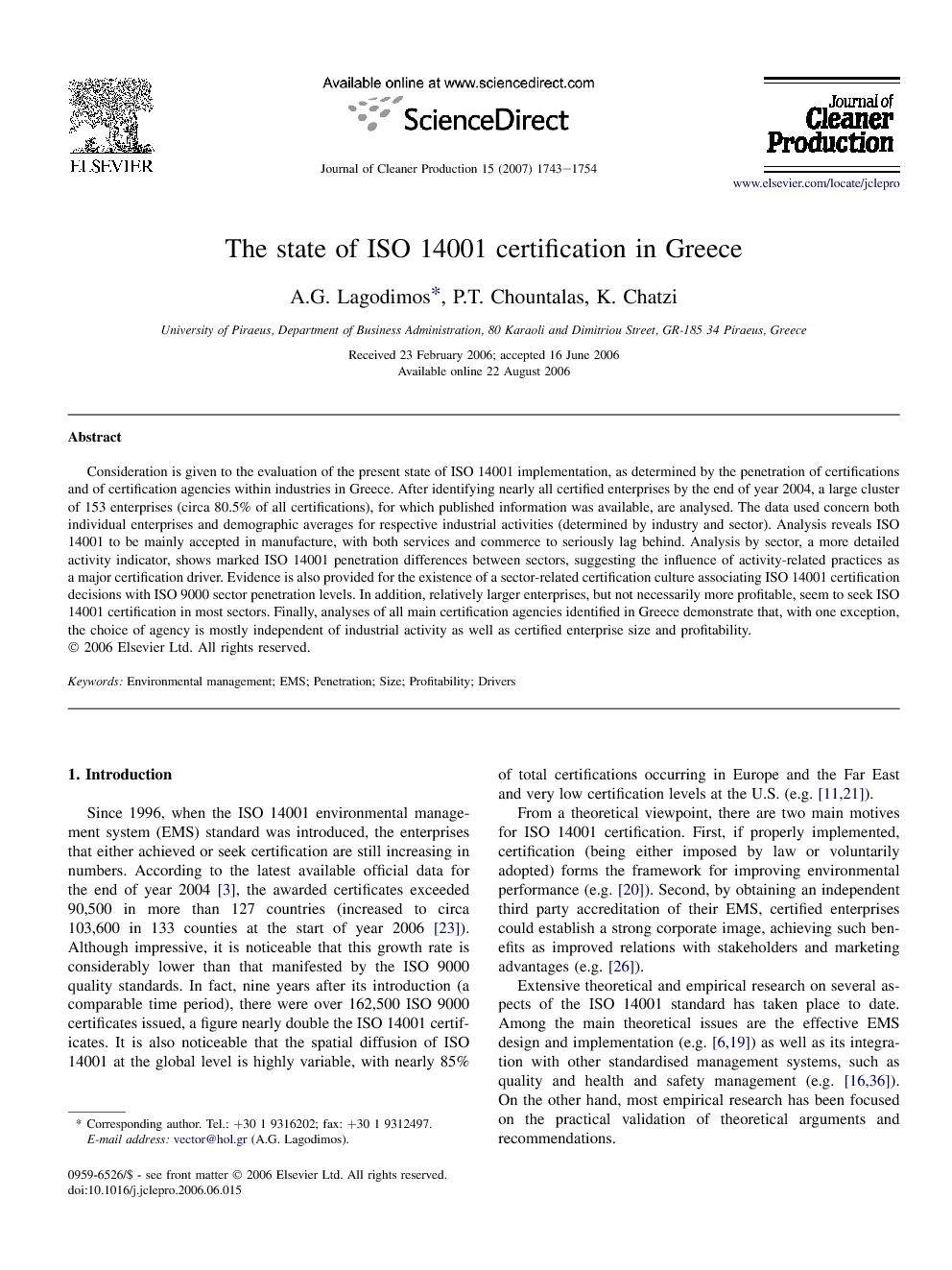 Consideration is given to the evaluation of the present state of ISO 14001 implementation, as determined by the penetration of certifications and of certification agencies within industries in Greece. After identifying nearly all certified enterprises by the end of year 2004, a large cluster of 153 enterprises (circa 80.5% of all certifications), for which published information was available, are analysed. The data used concern both individual enterprises and demographic averages for respective industrial activities (determined by industry and sector). Analysis reveals ISO 14001 to be mainly accepted in manufacture, with both services and commerce to seriously lag behind. Analysis by sector, a more detailed activity indicator, shows marked ISO 14001 penetration differences between sectors, suggesting the influence of activity-related practices as a major certification driver. Evidence is also provided for the existence of a sector-related certification culture associating ISO 14001 certification decisions with ISO 9000 sector penetration levels. In addition, relatively larger enterprises, but not necessarily more profitable, seem to seek ISO 14001 certification in most sectors. Finally, analyses of all main certification agencies identified in Greece demonstrate that, with one exception, the choice of agency is mostly independent of industrial activity as well as certified enterprise size and profitability.

Since 1996, when the ISO 14001 environmental management system (EMS) standard was introduced, the enterprises that either achieved or seek certification are still increasing in numbers. According to the latest available official data for the end of year 2004 [3], the awarded certificates exceeded 90,500 in more than 127 countries (increased to circa 103,600 in 133 counties at the start of year 2006 [23]). Although impressive, it is noticeable that this growth rate is considerably lower than that manifested by the ISO 9000 quality standards. In fact, nine years after its introduction (a comparable time period), there were over 162,500 ISO 9000 certificates issued, a figure nearly double the ISO 14001 certificates. It is also noticeable that the spatial diffusion of ISO 14001 at the global level is highly variable, with nearly 85% of total certifications occurring in Europe and the Far East and very low certification levels at the U.S. (e.g. [11] and [21]). From a theoretical viewpoint, there are two main motives for ISO 14001 certification. First, if properly implemented, certification (being either imposed by law or voluntarily adopted) forms the framework for improving environmental performance (e.g. [20]). Second, by obtaining an independent third party accreditation of their EMS, certified enterprises could establish a strong corporate image, achieving such benefits as improved relations with stakeholders and marketing advantages (e.g. [26]). Extensive theoretical and empirical research on several aspects of the ISO 14001 standard has taken place to date. Among the main theoretical issues are the effective EMS design and implementation (e.g. [6] and [19]) as well as its integration with other standardised management systems, such as quality and health and safety management (e.g. [16] and [36]). On the other hand, most empirical research has been focused on the practical validation of theoretical arguments and recommendations. Concentrating on empirical research, although we do not intend to comprehensively review this vast body of findings, we simply note that most studies within this research paradigm address one (or more) of the following major issues. (a) Determination of factors that may affect observed differences in measured outputs either temporarily (e.g. [2], [14], [29], [34], [37] and [38]) or over time (e.g. [5], [24], [25] and [35]). (b) Determination of factors that may affect (or lead to) certification decisions (e.g. [8], [10], [15], [24] and [30]). (c) Identification of certification trends and development of descriptive statistics (e.g. [4], [7], [13], [22] and [28]). Several (qualitative and quantitative) input factors, as well as output variables, have been studied within this research paradigm. In this context, the main outputs considered are various business and environmental performance indicators, such as sustainability, perceived certification costs or benefits and satisfaction with certification. Of the factors often found correlated with the above output measures it is worth mentioning enterprise size, various (internal and external) reasons for certification, perceived implementation difficulties and attitudes towards environmental protection. Being empirical, this research is inevitably based on the analysis of data from specific samples. Depending on the objectives, samples may consist of only certified or both certified and uncertified enterprises, the latter being used when certification as such is also a factor under investigation. Samples may further be limited to enterprises with common characteristics, such as industry, sector or country. With a few exceptions, data are obtained through questionnaire surveys. The research in this paper forms part of an ongoing investigation designed to determine and explain existing certification trends within the Greek economy. This generally follows the established empirical paradigm, with particular emphasis on issue types (b) and (c) above. The major issues we address here are encapsulated in the following two research questions. How do certification decisions relate with the industrial activity of an enterprise? Do enterprises manifest any selective preference to particular certification agencies? In order to study these issues we have based our analysis on a large cluster of certified enterprises (153 enterprises, representing 80.5% of nearly all certifications in Greece by the end of year 2004), for which published information was available. The information used was composed of both certified enterprises data as well as the respective industrial activity averages for all enterprises in each activity. We were, thus, able not only to study certified enterprises in isolation (as nearly all previous studies we know), but also to identify trends with reference to activity-based populations. Central among these trends is the penetration of ISO 14001 per se and of certification agencies within different industrial activities. Note that a closely related study focused on ISO 9000 certification has recently appeared [17]. In fact, the results of this study used here are as the basis for comparison between ISO 9000 and ISO 14001 certification trends in Greece. The remainder of this paper consists of five sections as follows. First we present the research issues together with the methodology used for the analysis. We then present the results concerning certified enterprises and certification agencies. These are followed by a discussion of their implications, while the paper is concluded with a summary of the main findings and directions for future research.

The research presented in this paper was designed to explore the state of ISO 14001 EMS certification in Greece. First, we were interested to determine possible systematic relations between enterprises industrial activities and certification decisions. Second, to identify possible preferences in the choice of specific certification agencies. In contrast with previous research, which mainly used questionnaire surveys, our approach was composed of an ex-post-analysis of published information, comprising both enterprise-specific data and respective demographic averages (providing the necessary reference set for comparisons). Industrial activity was examined at two levels of detail: industry, providing a general activity indicator and sector (within an industry) giving a more detailed description. The study of ISO 14001 penetration within different industries effectively reinforced general belief that manufacture is the prime user of the standards. It also revealed the previously identified association between certification and relatively large enterprises. More interesting results emerged from the sector analysis, demonstrating a non-uniform ISO 14001 penetration in all industries together with a less straightforward relation between size and certification. We thus conclude that certification decisions strongly depend on activity-related factors that cannot be ignored when studying the EMS certification process. A sector certification culture, developed by previous adoption of ISO 9000, appears as a plausible factor. A number of EMS certification agencies were found to operate in Greece. This first analysis demonstrated that five agencies dominate the certification process, with ELOT appearing as the market leader. It also revealed that the choice of a certification agency is mostly independent of the industrial activity (described by industry) of the enterprises seeking certification. Except for a marked avoidance of ELOT by relatively smaller enterprises, size and profitability were not found to seriously influence the choice of a certification agency. There are three major areas for further research. First, a focused analysis is required for the determination of specific activity-related practices and drivers affecting certification in different sectors. In principle, this should first define the set of factors that determine the respective market environment (including major processes and products) and then explore their influence (both quantitatively and qualitatively). Sectors with presently high ISO 14001 penetration and large population sizes should be given priority in this investigation. Second, further research is required on the choice of certification agencies. In contrast with this first analysis, however, consideration should be given to all major certification types and examine industrial activity at sector depth. Last, the research approach followed here can be used for international comparisons (particularly within the EU) in order to identify (and hopefully explain) existing certification differences and common trends. Necessary prerequisite for this is the use of an international database with common activity classification parameters for each country.