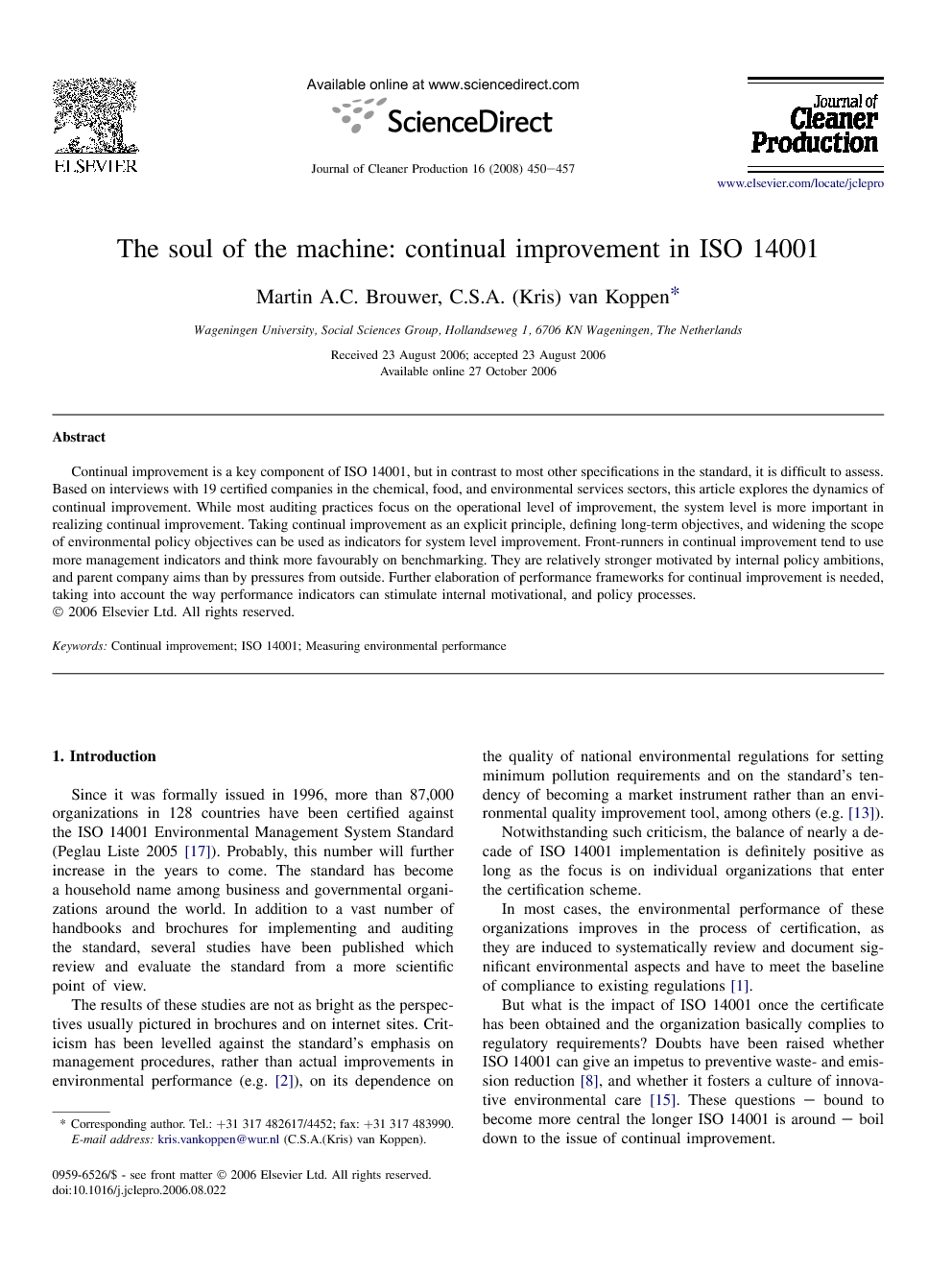 Since it was formally issued in 1996, more than 87,000 organizations in 128 countries have been certified against the ISO 14001 Environmental Management System Standard (Peglau Liste 2005 [17]). Probably, this number will further increase in the years to come. The standard has become a household name among business and governmental organizations around the world. In addition to a vast number of handbooks and brochures for implementing and auditing the standard, several studies have been published which review and evaluate the standard from a more scientific point of view. The results of these studies are not as bright as the perspectives usually pictured in brochures and on internet sites. Criticism has been levelled against the standard's emphasis on management procedures, rather than actual improvements in environmental performance (e.g. [2]), on its dependence on the quality of national environmental regulations for setting minimum pollution requirements and on the standard's tendency of becoming a market instrument rather than an environmental quality improvement tool, among others (e.g. [13]). Notwithstanding such criticism, the balance of nearly a decade of ISO 14001 implementation is definitely positive as long as the focus is on individual organizations that enter the certification scheme. In most cases, the environmental performance of these organizations improves in the process of certification, as they are induced to systematically review and document significant environmental aspects and have to meet the baseline of compliance to existing regulations [1]. But what is the impact of ISO 14001 once the certificate has been obtained and the organization basically complies to regulatory requirements? Doubts have been raised whether ISO 14001 can give an impetus to preventive waste- and emission reduction [8], and whether it fosters a culture of innovative environmental care [15]. These questions – bound to become more central the longer ISO 14001 is around – boil down to the issue of continual improvement. Continual improvement is a key element of ISO 14001. It is at the heart of the Plan-Do-Check-Act (PDCA) cycle that is the engine of the environmental management system. Together with compliance and pollution prevention, it is a basic commitment the organization has to endorse in its environmental policy and in its environmental practice. But, in contrast to the specification of other elements in ISO 14001, the standard lacks an operational definition of what continual improvement is and how it should be assessed. Several publications have exposed this under determination of continual improvement in ISO 14001 [1] and [21]. As research demonstrates, the principle leaves room for widely diverging company strategies. While some companies are actually realizing continual environmental improvement, for others it seems possible even to move in the opposite direction, without losing their certificate [1], [14] and [18]. Based on a thesis research project at Wageningen University [3], this article sets out to analyze the dynamics of continual improvement in companies certified against ISO 14001. Which internal and external factors influence the process of continual improvement in these companies? How do companies and auditors assess continual improvement? In what ways does the ISO 14001 standard provide an incentive for continual improvement? To answer these questions, in-depth interviews were held with 19 Dutch certified companies, divided over three sectors: chemical industries, food industries, and the environmental services sector. The chemical sector was selected because it is one of the most important industrial sectors in terms of environmental impacts, and has an extensive record in dealing with environmental management issues. The food industries were selected because they constitute a major Dutch industrial sector, with a broad range of environmental aspects, but in comparison with chemical industries, far less acute problems, public exposure, and management experience in dealing with environment. The environmental services sector was included as we were interested in the performance of service sector companies; by taking environmental services companies, we made sure that the companies investigated, in any case, were aware of environmental management issues. The interviews were held in 2004. Within these sectors, companies were selected at random. The sample of interviewed companies includes, AKZO Nobel, DuPont, Shell, BP, Heinz, CSM, Grolsch, Yakult, Swedish Match, VAR, Sita and Heijmans. In addition, four certifying bodies, also selected at random, were interviewed: Lloyd's, KEMA, Det Norske Veritas and SGS ICS. Before presenting the outcomes of the research, key characteristics of continual improvement in ISO 14001 are identified in the next section.

In this research a limited set of face-to-face interviews was selected rather than a larger mail survey. The results of these interviews, while not allowing for hard quantitative conclusions, provide an interesting and plausible view on the dynamics of continual improvement in ISO 14001. First, they confirm that continual improvement, although it is crucial in ISO 14001, is a vague and ill-defined concept. The following, mutually related aspects require more clarity: (a) Specifying minimal conditions to be met. It is unclear what constitutes the bottom line for continual improvement. We have argued that progress toward existing objectives – which to date is often the central criterion – is not adequate as a bottom line. (b) Differentiation between tactical and strategic improvement. We have argued that making a difference between these two levels of improvement – which can also be indicated as operational level and system level – is important in defining improvement. Particularly, the strategic or system level needs further elaboration in terms of operational-/process performance indicators and management-/strategic performance indicators. (c) Elaborating on the system boundaries. One major approach to strategic improvement is through the range of activities, focussing not only on internal processes, but also on issues of life cycle management, product stewardship, environment-oriented product development, and supplier requirements. The results show, in accordance to the literature, that strategic improvement can vary widely under ISO 14001. Almost half of the interviewed companies are more or less standing still in terms of ambition levels. They have not raised, their ambition significantly over the last years, and do not expect to do so in the near future. This does not mean there is no improvement, but improvements go in small steps toward rather static objectives. In contrast, nearly half of the interviewed companies are consistently and significantly improving their performance, not only operationally but also in terms of environmental ambition levels. Companies interviewed used a diversity of methods to monitor improvement. Most of these methods include measurements on operational level, as well as procedures for adjusting and raising the ambition levels of objectives. It would make little sense to suggest a uniform procedure here. On the basis of the results, however, some qualifying remarks can be made on assessing continual improvement within ISO 14001, such as using: • a standard set of normalised indicators; • a continual improvement report with a standardized content; • standardized Plan-Do-Check-Act (PDCA) papers; • different levels of improvement; • a similar priority calculation. Most of the companies (12), as well as three of the four certification bodies interviewed were not positive about comparing environmental action. It is very difficult to determine a uniform measure for continual improvement, as it is strongly dependent on organizational aspects, the location, the production process, and other company-specific factors. While companies and certifiers in majority rejected benchmarking between companies, we observed that companies which use more, different categories of indicators and which are front-runners in continual improvement, tend to be more positive. This may indicate that the more experience companies have, the more possibilities they see for benchmarking. It is useful, therefore, to further investigate these experiences and in particular to look for ways of using management performance indicators for better, quantitative assessment of improvement. Concerning motivational factors, the findings clearly indicate that internal motivation – including the policy of the parent company – is a major driver of continual improvement. Front-runners in improvement use the certified EMS as a tool for directing the company's policy, and as a landmark, and impulse within the company. The soul of the machine, therefore, is formed by the internal drive of the company toward better performance, rather than the pressure of demonstrating performance externally. Our findings indicate a need for further research into this motivational base of continual improvement. They also suggest that in further elaboration of performance frameworks, it would be important not only to investigate ways of using indicators as external benchmarks, but also to explore the ways indicators can support the internal motivational processes of the company.