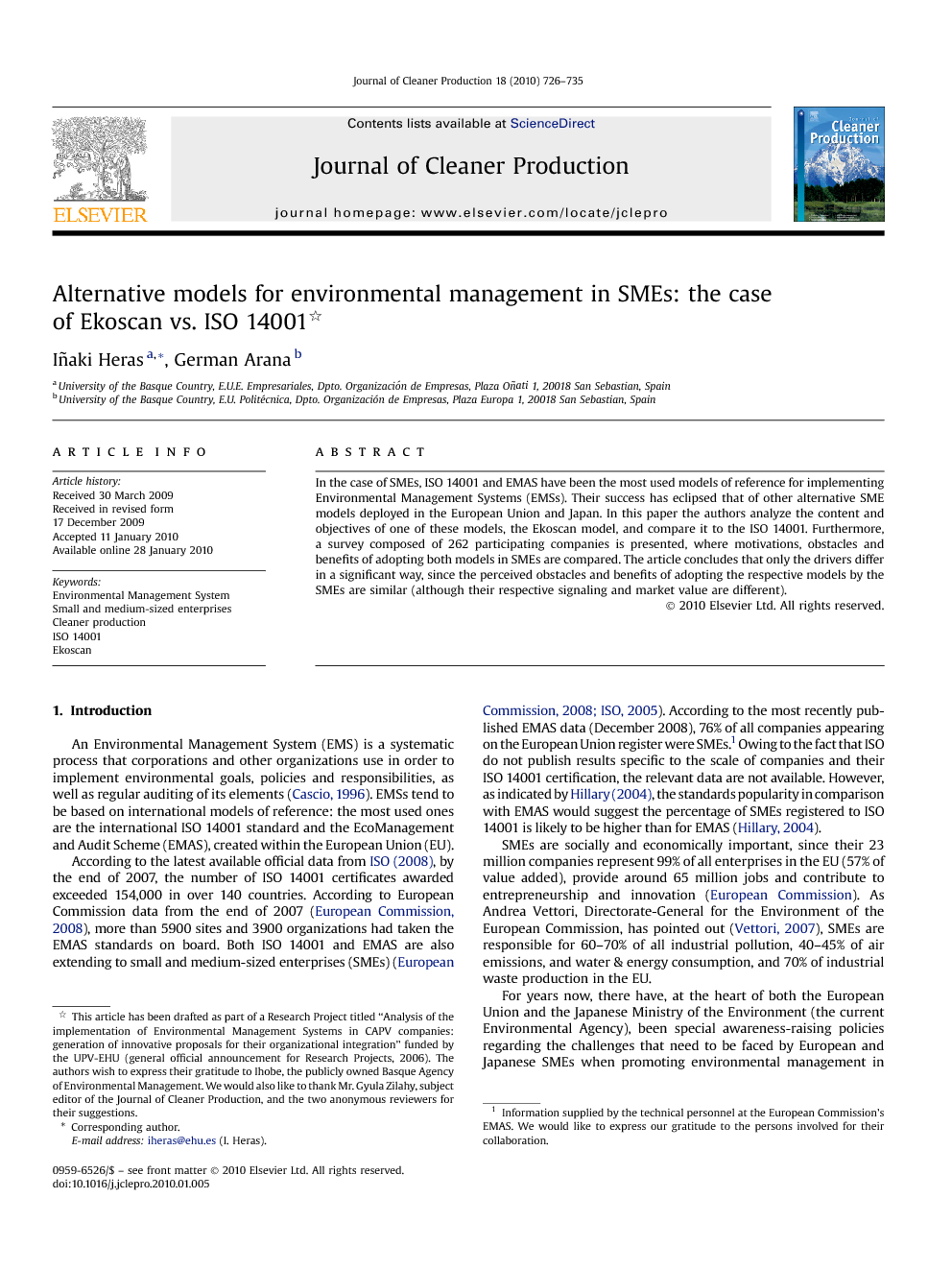 In the case of SMEs, ISO 14001 and EMAS have been the most used models of reference for implementing Environmental Management Systems (EMSs). Their success has eclipsed that of other alternative SME models deployed in the European Union and Japan. In this paper the authors analyze the content and objectives of one of these models, the Ekoscan model, and compare it to the ISO 14001. Furthermore, a survey composed of 262 participating companies is presented, where motivations, obstacles and benefits of adopting both models in SMEs are compared. The article concludes that only the drivers differ in a significant way, since the perceived obstacles and benefits of adopting the respective models by the SMEs are similar (although their respective signaling and market value are different).

An Environmental Management System (EMS) is a systematic process that corporations and other organizations use in order to implement environmental goals, policies and responsibilities, as well as regular auditing of its elements (Cascio, 1996). EMSs tend to be based on international models of reference: the most used ones are the international ISO 14001 standard and the EcoManagement and Audit Scheme (EMAS), created within the European Union (EU). According to the latest available official data from ISO (2008), by the end of 2007, the number of ISO 14001 certificates awarded exceeded 154,000 in over 140 countries. According to European Commission data from the end of 2007 (European Commission, 2008), more than 5900 sites and 3900 organizations had taken the EMAS standards on board. Both ISO 14001 and EMAS are also extending to small and medium-sized enterprises (SMEs) (European Commission, 2008 and ISO, 2005). According to the most recently published EMAS data (December 2008), 76% of all companies appearing on the European Union register were SMEs.1 Owing to the fact that ISO do not publish results specific to the scale of companies and their ISO 14001 certification, the relevant data are not available. However, as indicated by Hillary (2004), the standards popularity in comparison with EMAS would suggest the percentage of SMEs registered to ISO 14001 is likely to be higher than for EMAS (Hillary, 2004). SMEs are socially and economically important, since their 23 million companies represent 99% of all enterprises in the EU (57% of value added), provide around 65 million jobs and contribute to entrepreneurship and innovation (European Commission). As Andrea Vettori, Directorate-General for the Environment of the European Commission, has pointed out (Vettori, 2007), SMEs are responsible for 60–70% of all industrial pollution, 40–45% of air emissions, and water & energy consumption, and 70% of industrial waste production in the EU. For years now, there have, at the heart of both the European Union and the Japanese Ministry of the Environment (the current Environmental Agency), been special awareness-raising policies regarding the challenges that need to be faced by European and Japanese SMEs when promoting environmental management in their organizations. Thus, in Europe, projects have been carried out within the EU aimed at facilitating the implementation of an EMAS on the part of SMEs (EMAS Easy Project, 2008). The dissemination of specific models and standards for EMSs have also been promoted, resulting in a great diversity of alternative models for Environmental Management (AMEMs) in SMEs (Kahlenborn, 2004 and ISO, 2005). Indeed, ISO, having witnessed the difficulties encountered by companies attempting to adopt the standard international framework (ISO, 2005), has also studied the alternative SMEs available. Given that the alternative programmes are so diversesingle bondas highlighted by Wenk (2006) and Kahlenborn and Freier (2007)single bondthere exists a real need to study the AMEMs for SMEs in depth, improving as a consequence existing transparency in terms of information. As a result, the aim of this paper is to present a specific AMEM for SMEs (Ekoscan)single bondaddressed for the first time in the fieldsingle bondwith the specific objective of analysing whether or not the model in question is adopted in a different mode to ISO 14001. Consequently, the motivation behind, obstacles to and benefits for companies that have adopted the AMEM for SMEs are analyzed and are compared to the cases of other SMEs that have implemented and certified ISO 14001, in order to analyze the suitability of the SME specific models in question. The remainder of this paper is arranged as follows. The following section of the paper presents a brief overview of the main AMEMs for SMEs. It then goes on to analyze the Ekoscan model and, within the comparative analysis between ISO 14001 and Ekoscan, the working hypotheses related are stated. The third section discusses the empirical methodology deployed during the study. The results of the aforementioned survey are synthesized in the fourth section, with discussion of the results following in the fifth section. The paper concludes with a summary of the main findings and suggestions of particular interest to those stakeholders involved in the promotion of EMSs.

From the field work carried out we have concluded that only perceived motivational factors that lead SMEs to implement and certify alternatives models to ISO 14001 (such as Ekoscan) are significantly different. In terms of perceived obstacles to and the benefits of implementation, obtained by the SMEs, results for the two models are similar. It should be noted that the cost of adopting the AMAMs are less. The SMEs cite drivers of a more “substantive” nature as a factor in the implementation of AMEMs, such as an improvement in the environmental situation regarding the company, rather than factors such as the coercive power of customers or the company image, which are deemed more important as driving forces behind ISO 14001. As for obstacles, no significant differences were found. Attention is drawn to the difficulty on the part of SMEs in knowing what environmental legislation was applicable and therefore how to comply with it. In the case of Ekoscan, this obstacle would seem to be less important than in the case of ISO 14001 due to the substantial back-up provided by the local Public Administration. As far as benefits are concerned, although similarly no significant statistical differences are clearly seen to exist, special mention should be made of the supremacy of the factor related to an improvement in the environmental situation mentioned by SMEs, with its limited external impact in comparison to that of an internationally established certificate such as ISO 140001 being a weak point of the AMEM. With reference to the field work undertaken the researchers would like to mention limitations with regard to the survey which were a consequence of the methodology used to obtain the quantitative information. The research methodology deployed, even though it may be conventional and generally accepted, does have limitations. As is the case with the vast majority of quantitative studies, the information used in this paper is based on the perceptions given by specialized managers who had taken part in the EMS introduction process. Any analyses of the effect of EMSs conducted in this way are subject to possible weakness and methodological distortion, a bias problem that Wayhan and Balderson, 2007 and Wayhan et al., 2002 and Heras et al. (2002) have pointed out in the case of Quality Management, and Nawrocka and Parker (2009) have detailed in the case of CEM. With a view to avoiding this problem, the authors believe it would be interesting to analyze the benefits of EMSs or their influence in terms of environmental performance, based on objective environmental data. Such an approach has already been adopted by a few pioneering studies published in the field [e.g. Russo and Harrison, 2001 and Boiral, 2007]. As regards the future, it remains to be seen whether Ekoscan and the other AMEMs for SMEs will be able to achieve the critical mass needed to deal with major models of reference or whether, conversely, it will be the general simplified models for SMEs (such as the case of EMAS Easy) that will face a brighter future in the field of CEM. In this respect, the fact that ISO has been determined to respond to this challenge should be highlighted. The fact is that for a long time now an effort has been made to adapt to ISO 14001 standard in order for it to be on the SMEs' agenda (ISO/TC207/SC1/SME), by means of ISO 14005 standard project. Within this process, special mention should be made of the fact that the will is there “to encourage the participation of SME representatives in standards development, that features of ISO 14001 which are particularly difficult for SMEs to comply with should be taken account, that it is advisable to review light initiatives (highlighted in the original), and to look into how to differ from ISO 14001 approach” (ISO/TC207/SC1/SME). Attention should also be drawn to the fact that the Directorate-General for Enterprise and Industry of the EU suggested to the European Centre for Normalization that it consider the Ekoscan model as a reference point in defining the foundations for the future ISO 14005 environmental standard. At the present time, the Ekoscan model is an interesting initiative, partly owing to its simplicity and partly because it focuses on a fundamental aspect on which models for implementing EMSs need to focus: an improvement in environmental performance. In our opinion, a simple standard geared towards environmental improvement similar to Ekoscan, but with the legitimacy, impact and market value of a standard emanating from ISO, could be established in the not-too distant future as a major reference point for SMEs from the EU and from the rest of the world.