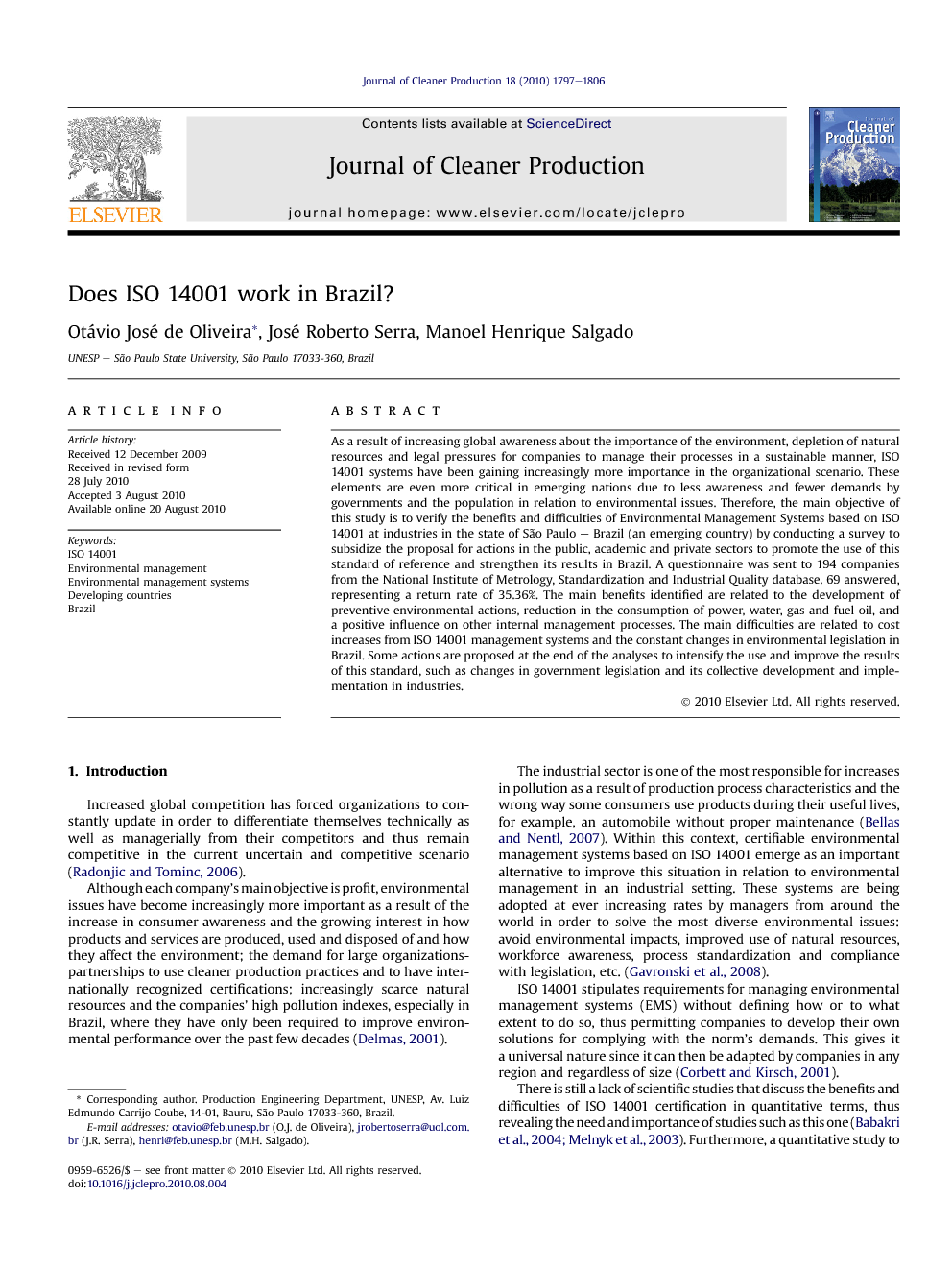 As a result of increasing global awareness about the importance of the environment, depletion of natural resources and legal pressures for companies to manage their processes in a sustainable manner, ISO 14001 systems have been gaining increasingly more importance in the organizational scenario. These elements are even more critical in emerging nations due to less awareness and fewer demands by governments and the population in relation to environmental issues. Therefore, the main objective of this study is to verify the benefits and difficulties of Environmental Management Systems based on ISO 14001 at industries in the state of São Paulo – Brazil (an emerging country) by conducting a survey to subsidize the proposal for actions in the public, academic and private sectors to promote the use of this standard of reference and strengthen its results in Brazil. A questionnaire was sent to 194 companies from the National Institute of Metrology, Standardization and Industrial Quality database. 69 answered, representing a return rate of 35.36%. The main benefits identified are related to the development of preventive environmental actions, reduction in the consumption of power, water, gas and fuel oil, and a positive influence on other internal management processes. The main difficulties are related to cost increases from ISO 14001 management systems and the constant changes in environmental legislation in Brazil. Some actions are proposed at the end of the analyses to intensify the use and improve the results of this standard, such as changes in government legislation and its collective development and implementation in industries.

Increased global competition has forced organizations to constantly update in order to differentiate themselves technically as well as managerially from their competitors and thus remain competitive in the current uncertain and competitive scenario (Radonjic and Tominc, 2006). Although each company’s main objective is profit, environmental issues have become increasingly more important as a result of the increase in consumer awareness and the growing interest in how products and services are produced, used and disposed of and how they affect the environment; the demand for large organizations-partnerships to use cleaner production practices and to have internationally recognized certifications; increasingly scarce natural resources and the companies’ high pollution indexes, especially in Brazil, where they have only been required to improve environmental performance over the past few decades (Delmas, 2001). The industrial sector is one of the most responsible for increases in pollution as a result of production process characteristics and the wrong way some consumers use products during their useful lives, for example, an automobile without proper maintenance (Bellas and Nentl, 2007). Within this context, certifiable environmental management systems based on ISO 14001 emerge as an important alternative to improve this situation in relation to environmental management in an industrial setting. These systems are being adopted at ever increasing rates by managers from around the world in order to solve the most diverse environmental issues: avoid environmental impacts, improved use of natural resources, workforce awareness, process standardization and compliance with legislation, etc. (Gavronski et al., 2008). ISO 14001 stipulates requirements for managing environmental management systems (EMS) without defining how or to what extent to do so, thus permitting companies to develop their own solutions for complying with the norm’s demands. This gives it a universal nature since it can then be adapted by companies in any region and regardless of size (Corbett and Kirsch, 2001). There is still a lack of scientific studies that discuss the benefits and difficulties of ISO 14001 certification in quantitative terms, thus revealing the need and importance of studies such as this one (Babakri et al., 2004 and Melnyk et al., 2003). Furthermore, a quantitative study to effectively verify the benefits and difficulties in using ISO 14001 systems permits the proposal of actions in public, private and academic sectors, based on a broader and more current panorama, to increase the use of this standard and improve results from its use. It also permits corroborating, deepening or correcting the theoretical reference from these field verifications. This study’s geographical borders are delimited by the most important Brazilian state from an economic perspective: São Paulo. Brazil has twenty-six states and a federal district. It has a population of 183,987,291 inhabitants (census data from 2007). In the second quarter of 2008, its Gross Domestic Product (GDP) was approximately 358 billion dollars. The state of São Paulo has 645 cities, a population of approximately 39,827,570 inhabitants and it is responsible for 31% of Brazil’s GDP (IBGE, 2009). Despite all the environmental problems Brazil is going through, it had 2447 ISO 14001 certificates in 2008 and São Paulo had 652 of them, representing 26.65% of the national total. However, the net number of São Paulo companies with ISO 14001 certification at the time this study was conducted (second semester of 2008) was 194, already discounting certifications based on older versions of the norm and the case of different certifications at different business units of a same company (INMETRO, 2009). As a result, the main objective of this study is to verify benefits and difficulties in adopting ISO 14001 EMS at industries in the state of São Paulo by conducting a survey to subsidize the proposal for actions in public, academic and private sectors to promote the use of this standard of reference and strengthen its results in Brazil.

Environmental management is a real and actual alternative used by companies around the world to improve and control their activities in order to pollute the environment less. This generates savings and, consequently, greater competitiveness as a result of project and process modernization and the reduction of waste, residue emissions and the number of occurrences and fines from inspection bodies. ISO 14001 has been one of the most used instruments for developing environmental management in industries. Its adoption has increased continuously over the years in Brazil, indicating maturity in environmental awareness by business owners seeking sustainable management. As discussed in this text, scientific literature has disclosed several benefits and difficulties in relation to environmental management systems based on ISO 14001 studies conducted around the world. Knowledge of these factors is of utmost importance to organizations because it avoids already broadly known basic errors and it strengthens results by anticipating and solving potential problems. However, taking into account the intense evolution of global organizational dynamics, these studies needed to be updated constantly. They must also be more specific, considering smaller regions and specific business segments in order to more faithfully represent a particular group. That was the case of this study, which surveyed ISO 14001 certified industries in the state of São Paulo. Survey results were presented in Section 4 of this paper, thus guaranteeing the scope of its objective. The study revealed satisfactory results in relation to ISO 14001 system benefits and difficulties in industries in the state of São Paulo, but it also indicated important points that must be analyzed and improved, such as the creation of mechanisms by the government and associations class for access to better conditions for insurance and loans for certified companies. From the diagnosis related to using ISO 14001 conducted in this study, it is possible to plan collective actions and public policies to strengthen results. Articulation between the private sector – represented by companies and their entities – federal and state governments and the academic sector is suggested to organize collective movements for implementing systems based on this standard and institute its adoption as a requirement for companies that supply inputs and provide services for the government.