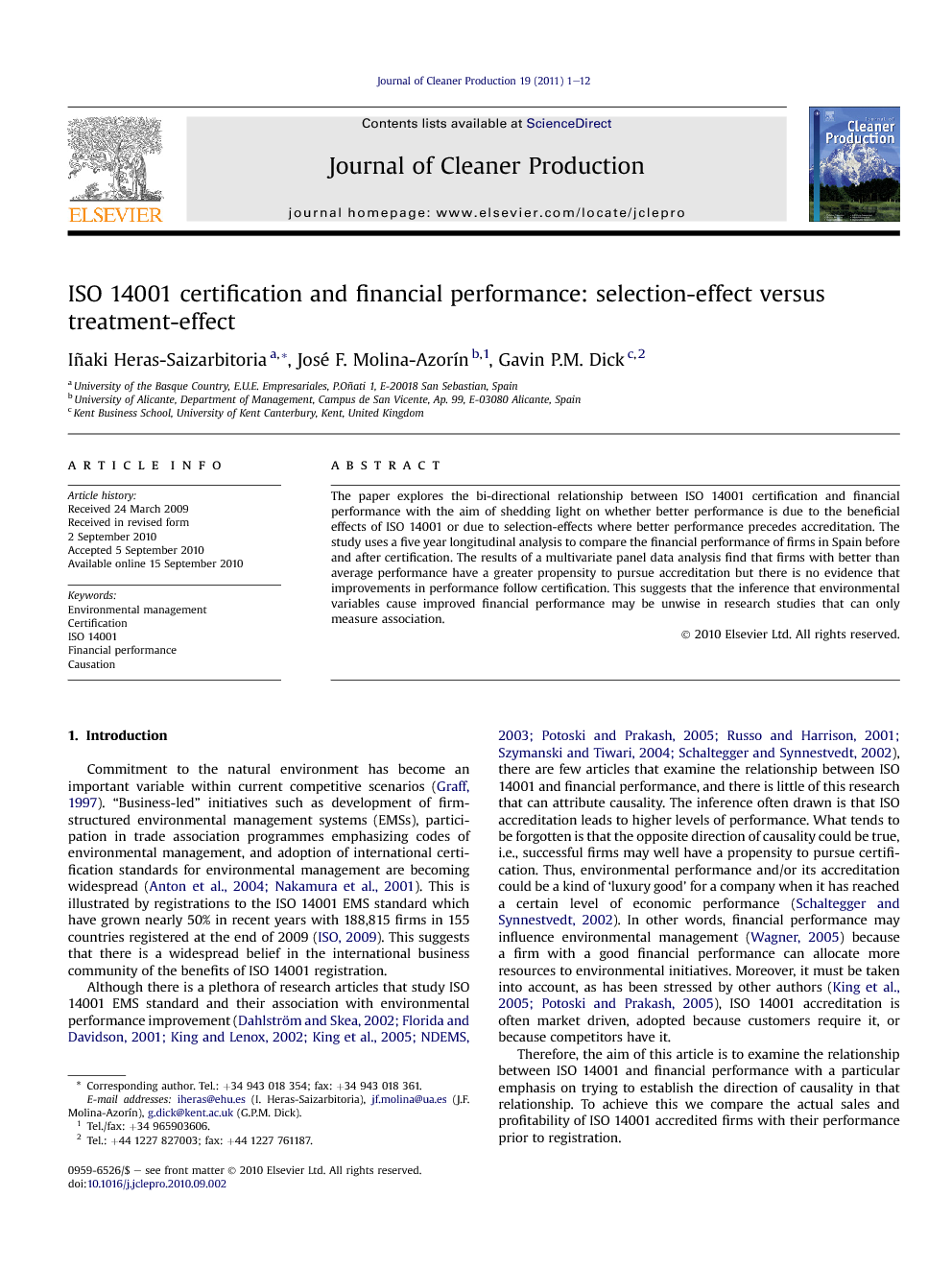 Commitment to the natural environment has become an important variable within current competitive scenarios (Graff, 1997). “Business-led” initiatives such as development of firm-structured environmental management systems (EMSs), participation in trade association programmes emphasizing codes of environmental management, and adoption of international certification standards for environmental management are becoming widespread (Anton et al., 2004 and Nakamura et al., 2001). This is illustrated by registrations to the ISO 14001 EMS standard which have grown nearly 50% in recent years with 188,815 firms in 155 countries registered at the end of 2009 (ISO, 2009). This suggests that there is a widespread belief in the international business community of the benefits of ISO 14001 registration. Although there is a plethora of research articles that study ISO 14001 EMS standard and their association with environmental performance improvement (Dahlström and Skea, 2002, Florida and Davidson, 2001, King and Lenox, 2002, King et al., 2005, NDEMS, 2003, Potoski and Prakash, 2005, Russo and Harrison, 2001, Szymanski and Tiwari, 2004 and Schaltegger and Synnestvedt, 2002), there are few articles that examine the relationship between ISO 14001 and financial performance, and there is little of this research that can attribute causality. The inference often drawn is that ISO accreditation leads to higher levels of performance. What tends to be forgotten is that the opposite direction of causality could be true, i.e., successful firms may well have a propensity to pursue certification. Thus, environmental performance and/or its accreditation could be a kind of ‘luxury good’ for a company when it has reached a certain level of economic performance (Schaltegger and Synnestvedt, 2002). In other words, financial performance may influence environmental management (Wagner, 2005) because a firm with a good financial performance can allocate more resources to environmental initiatives. Moreover, it must be taken into account, as has been stressed by other authors (King et al., 2005 and Potoski and Prakash, 2005), ISO 14001 accreditation is often market driven, adopted because customers require it, or because competitors have it. Therefore, the aim of this article is to examine the relationship between ISO 14001 and financial performance with a particular emphasis on trying to establish the direction of causality in that relationship. To achieve this we compare the actual sales and profitability of ISO 14001 accredited firms with their performance prior to registration. Furthermore, most quantitative studies are based on surveys in which the ratings were given by respondents that had taken part in the EMS introduction process (e.g. Sulaiman et al., 2002, Hamschmidt and Dyllick, 2001, Summers, 2002 and Schylander and Martinuzzi, 2007). Any analyses of the effect of EMSs conducted in this way are subject to possible weakness and methodological distortion, so to avoid this problem we use only objective variables in our analyses. The paper is structured as follows. First, we present a review of literature that considers environmental management, certification and performance. This is then followed by a description of our research methodology and presentation of our findings. These are then discussed and conclusions drawn.

Our findings of the dominance of a selection-effect over a treatment-effect in explaining the better than average profitability and sales growth of ISO 14001 certified firms has also been found in research looking at longitudinal analyses of performance achievements in firms who are pursuing ISO 9001 in the USA, Spain and Denmark—for a review see Dick et al. (2008). Furthermore, as stated in the literature review section, our pioneering findings for the specific case of ISO 14001 are consistent with the findings of corporate responsibility research looking at the causal relationship between financial performance and corporate social responsibility. Preston and O’Bannon (1997) called this the “Available Funds Hypothesis” as the availability of slack funds enables a firm to pursue costly environmental or social activities. Thus, this relationship is consistent with our finding for the dominance of the selection-effects over treatment-effects where more profitable firms have a greater propensity to adopt international standards for EMS that less successful firms.In the empirical literature that we reviewed earlier (Table 1 and Table 2 provides a summary) we concluded that overall there was stronger evidence for a positive relationship between environmental management initiatives and firms’ performance than for neutral or negative results but that earlier adopters appeared to gain most from their initiatives. Generally the assumption made in this research is that environmental proactivity is an independent variable with performance benefits being the dependent variable. Our findings suggest that it may be equally valid to consider a counterintuitive causation path were pursuit of environmental initiatives such as adoption of ISO 14001 being dependent on a firm having better than average performance. We believe that co-causation models where selection and treatment-effects are considered deserve wider consideration in the development of explanatory models. We suggest that by adopting research designs that can explicitly measure both effects a broader understanding of the role of selection-effects can be established. So, what is it that drives these selection-effects that we have found? The Available Funds Hypothesis (Preston and O’Bannon, 1997) explains that lack of funds can deselect those who cannot afford the costs involved, but what motivates firms that are more prosperous to use their available funds on accreditation to ISO 14001? A plausible explanation is the signalling or reputation motivation for the pursuit of ISO 14001 accreditation. Here the theory of decentralized institutions (King et al., 2005) and theory of cartels and clubs applied to voluntary programmes (Potoski and Prakash, 2005) could be used to explain the symbolic value of certification that attracts better performing firms. For practitioners, our findings should give pause for thought. It is indeed tempting for managers to believe that ISO 14001 certification will lead to business benefits. After all firms that they would like to emulate in terms of performance often have it! This is then reinforced by the seemingly pervasive conviction (often quoted as supported by research) that an EMS certified to ISO 14001 standard will reduce cost and increase sales. However, our findings, and the parallel findings for ISO 9001 adoption (Heras et al., 2002), indicate that it might be a wise decision to only pursue accreditation if there is a demand from customers for it, since we have found no sales or profitability improvements after certification. However, our findings indicate that the money spent on certification has not adversely affected the profitability of firms. This does suggest that cost benefits arising from certification are on average sufficient to offset the investment. Therefore, we are not suggesting to practitioners that certification to ISO 14001 is a bad investment, rather that inflated expectations of financial performance improvement are likely to be unfounded. 5.3. Limitations and future work Although we have used objective variables in our research which have the advantage of avoiding respondent bias, we accept that financial performance depends on many other variables than the existence of an ISO 14001 accredited EMS. Indeed these latent variables may themselves be the drivers influencing our variables. So it always remains a possibility that our accredited firms are different in other ways that could lead to a distortion in the absolute level of abnormal ROA and sales growth difference we report at the point of registration. However, the methods we have used control for a firm’s size and economic sector differences and control for unobserved heterogeneity. Additionally, our study has used repeated measures so any distortions are consistent across the years so the year-by-year differences within the study can be viewed as reliable indicators of the influence of treatment-effects vs. selection-effects. Although our research is based on data from Spain, we believe that the selection-effect is not just a national phenomenon as there are indications from the research of Toffel (2006) in the USA and Nishitani (2009) in Japan that this selection-effect for ISO 14001 is widespread. This is confirmed from the parallel field of ISO 9001 research where selection-effects are found in other parts of Europe and the USA (Dick et al., 2008). However, given that over 155 countries with varied cultural and economic regimes have firms registered to ISO 14001 standards we accept that this selection-effect may not be universal in scope. We hope that others will join us to extend our research on treatment-effects vs. selection-effect into other countries where ISO 14001 accreditation has become popular so that the influence of the selection-effect can be better understood alongside a better understanding of the specific drivers that mediate treatment-effects and selection-effects. This echoes the suggestion of Nawrocka and Parker (2009), who stress the need to analyse in which specific circumstances the adoption of EMS effect performance, rather than whether they do so or not. This in turn could lead to the development of broader theory that will enrich our understanding of the complexity of attributing performance in environmental research.