عنوان انگلیسی
The effect of ISO 14001 certification on toxic emissions: an analysis of industrial facilities in the north of Spain
دانلود فوری مقاله + سفارش ترجمه 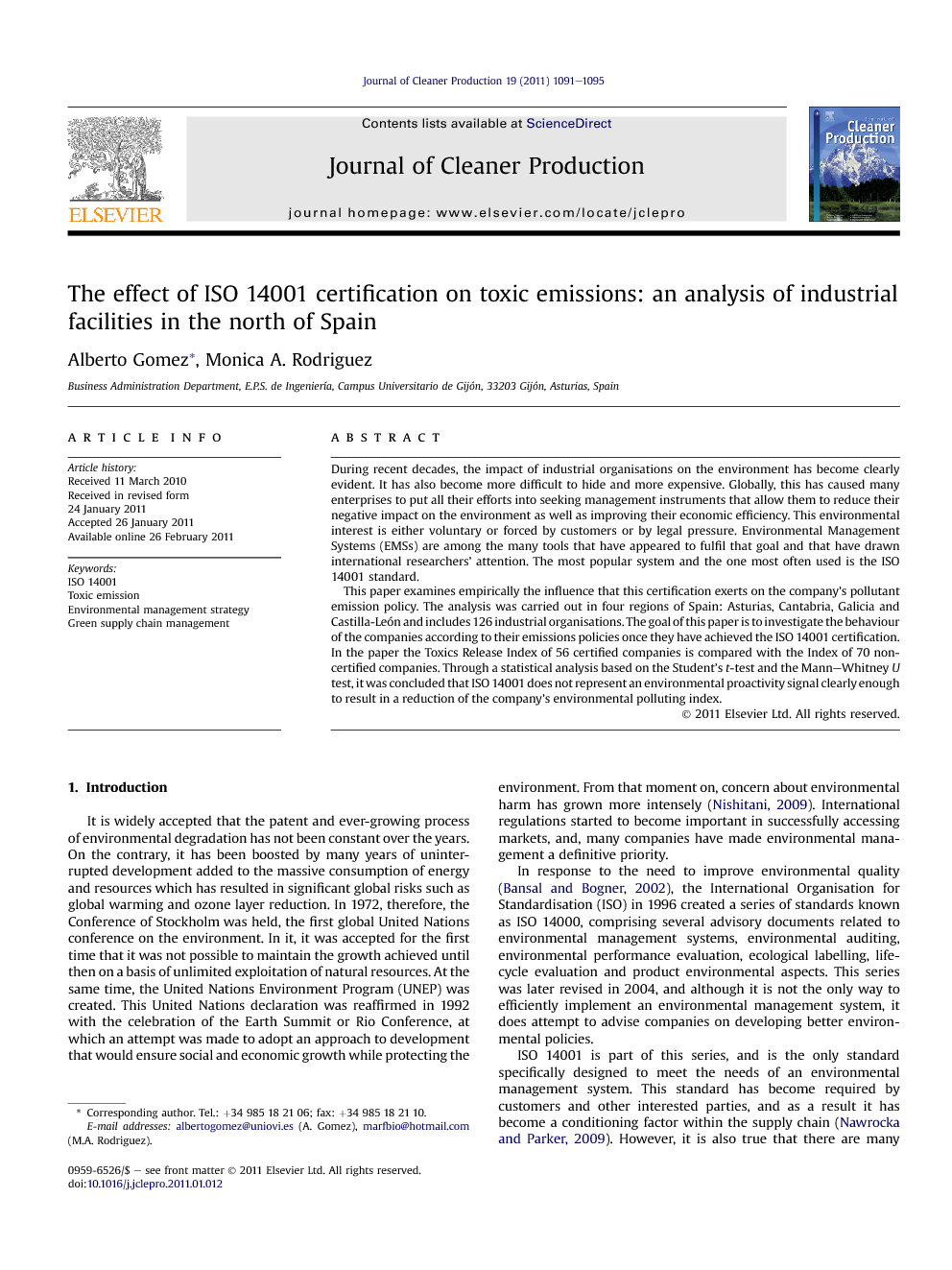 During recent decades, the impact of industrial organisations on the environment has become clearly evident. It has also become more difficult to hide and more expensive. Globally, this has caused many enterprises to put all their efforts into seeking management instruments that allow them to reduce their negative impact on the environment as well as improving their economic efficiency. This environmental interest is either voluntary or forced by customers or by legal pressure. Environmental Management Systems (EMSs) are among the many tools that have appeared to fulfil that goal and that have drawn international researchers’ attention. The most popular system and the one most often used is the ISO 14001 standard. This paper examines empirically the influence that this certification exerts on the company’s pollutant emission policy. The analysis was carried out in four regions of Spain: Asturias, Cantabria, Galicia and Castilla-León and includes 126 industrial organisations. The goal of this paper is to investigate the behaviour of the companies according to their emissions policies once they have achieved the ISO 14001 certification. In the paper the Toxics Release Index of 56 certified companies is compared with the Index of 70 non-certified companies. Through a statistical analysis based on the Student’s t-test and the Mann–Whitney U test, it was concluded that ISO 14001 does not represent an environmental proactivity signal clearly enough to result in a reduction of the company’s environmental polluting index.

It is widely accepted that the patent and ever-growing process of environmental degradation has not been constant over the years. On the contrary, it has been boosted by many years of uninterrupted development added to the massive consumption of energy and resources which has resulted in significant global risks such as global warming and ozone layer reduction. In 1972, therefore, the Conference of Stockholm was held, the first global United Nations conference on the environment. In it, it was accepted for the first time that it was not possible to maintain the growth achieved until then on a basis of unlimited exploitation of natural resources. At the same time, the United Nations Environment Program (UNEP) was created. This United Nations declaration was reaffirmed in 1992 with the celebration of the Earth Summit or Rio Conference, at which an attempt was made to adopt an approach to development that would ensure social and economic growth while protecting the environment. From that moment on, concern about environmental harm has grown more intensely (Nishitani, 2009). International regulations started to become important in successfully accessing markets, and, many companies have made environmental management a definitive priority. In response to the need to improve environmental quality (Bansal and Bogner, 2002), the International Organisation for Standardisation (ISO) in 1996 created a series of standards known as ISO 14000, comprising several advisory documents related to environmental management systems, environmental auditing, environmental performance evaluation, ecological labelling, life-cycle evaluation and product environmental aspects. This series was later revised in 2004, and although it is not the only way to efficiently implement an environmental management system, it does attempt to advise companies on developing better environmental policies. ISO 14001 is part of this series, and is the only standard specifically designed to meet the needs of an environmental management system. This standard has become required by customers and other interested parties, and as a result it has become a conditioning factor within the supply chain (Nawrocka and Parker, 2009). However, it is also true that there are many companies still reluctant to adopt the standard, since they do not understand the benefits obtained from its application (Babakri et al., 2004). According to this standard, the environmental management system (EMS) offers the company a measurable result of its environmental performance, as it operates on a “Plan, Do, Check, Act” cycle basis. This means that it is put into practice as a continuous cycle of declaration, scheduling, execution, revision and improvement of the processes and actions carried out by the company (Perotto et al., 2008). In addition, industries are constantly facing environmental regulations that become ever stricter. For instance, in 1996 the EU adopted Directive 96/61/CE concerning integrated pollution prevention and control (IPPC Directive) by which industrial and agricultural facilities are required to obtain an environmental permit that guarantees compliance with a series of basic environmental requirements. This directive was incorporated into the Spanish legal system through the Law of Integrated Prevention and Control of Pollution, the aim of which is to prevent, and if that is impossible, to reduce and control pollution of the atmosphere, water and the soil by means of a system of integrated prevention and control. Whether due to compliance with current legislation or to market pressure, the business world’s commitment to the environment has become a variable of growing importance within an increasingly competitive market. Within this scenario, ISO 14001 offers various guidelines to design an EMS that enables the company to identify its own environmental policy (Murat, 2009), as well as to correct possible deficiencies. According to statistics published by the ISO (ISO, 2007), 154,571 certificates were issued during 2007 in 148 countries (29% in the services sector). This was an increase of 21% over 2006 when the total was 128,211 in 140 countries (27% in the services sector). Spain was ranked third with 13,825 certifications compared to 11,125 at the end of 2006. It is interesting to study the extent to which adopting the standard is related to an environmental transformation in productive operations and processes (González-Benito and González-Benito, 2008) and to technological modernisation. Several authors (Hart, 1995 and Delmas and Toffel, 2003) have tried to formally study companies’ environmental strategic behaviour. They have observed that this behaviour describes a continuum that ranges from a passive or reactive strategy to the most advanced or proactive strategy. Companies showing a passive approach towards environmental management evaluate environmental aspects as cost factors, and therefore do not perceive the possible competitive advantages. Those with an active approach develop an environmental awareness only because of legislation. Proactive companies, on the other hand, weigh up environmental aspects in all decision-making processes, and see their obligation towards the environment as an opportunity to increase their share in markets for environmentally friendly products. If a reactive strategy is only intended to comply with the law, it will solve the environmental problem in the short run, but it will not be sufficient to improve the company’s competitive position. That is why, in response to the demands of their customers, employees, shareholders, the mass-media, etc. companies focus their actions on voluntary or proactive strategies for pollution prevention. In this sense, authors such as Porter (1991) and Porter and Van der Linde (1995) support the “Porter hypothesis”. This hypothesis supposes that in the relationship between proactive strategies and a company’s economy, it is possible to obtain a free-lunch, in which environmental quality targets are achieved. At the same time productive costs are reduced and productivity is improved. One usual practice within proactive strategies is to obtain ISO 14001 certification. It is in this that this paper finds its goal. The paper intends to investigate further the objective environmental consequences stemming from certification of a company’s EMS. Specifically, this paper’s aim is to develop an empirical approach to the effect of ISO 14001 certification on the levels of environmental pollution, thus answering the question of whether this certification results in a reduction in the levels of polluting compounds released by the company or not.

ISO 14001 certified and non-certified companies were analysed to investigate whether there is a relationship between certification and the toxics release rates of both groups. In the article, the Toxics Release Index of 56 certified companies are compared with that of 70 non-certified companies, with the help of the statistics program SPSS 15.0. Firstly, the normality of the Toxic Release Index was analyzed, with the conclusion that this index continues to follow the normal pattern of distribution in the case of certified companies, but in the case of non-certified companies this cannot be stated with assurance. To analyze the effect of certification, it was decided to compare the averages of both indexes with the help of a Student’s test and a Mann–Whitney U test. Both tests concluded that these averages are the same, with a significance level of 0.05. The final conclusion is that there is no relationship that links the fact of a company being certified to its pollutant emission indexes. The empirical verification of the fact that the certification does not cause the pollutant emissions level to decrease significantly, suggests that the companies perceive the certification as a reactive-type investment rather than one that is proactive. In short, certification is considered to be a standard that must be adopted because of institutional pressure, but not as an investment that favours an improved environment. It could be said that the adoption of the standard is seen as a sign that tries to show the company as socially within the law without resulting in significant changes to the company’s management. In this sense, authors like Boiral (2001) warn that ISO 14001 may be used by companies as a marketing tool, something that is aggravated, according to Corbett and Kirsch (2000), by the fact that the certification postulates neither specific practices nor definite result requirements. Given the issue’s importance and topicality, research into environmental strategies adopted by companies and their responsibilities for environmental degradation needs to be more deeply investigated. It should nevertheless be noted that the conclusions obtained in this study are similar to the ones obtained by Barla (2007). He tried to verify whether the adoption of the standard produces a significant impact on the paper industry’s environmental performance. He found that certification does not lead to a reduction in suspended solid emissions. In his study, he concludes that facilities adopting the standard did not undergo any significant reduction in their emissions. The impact of the standard is highly variable: even though some facilities reduce their emissions after certification, the emissions levels of most facilities remain stable or even increase after certification. Further research is needed (according to production and studying the same industrial sector, for example) to determine whether potency-weighted air emissions alone are an adequate metric for determining whether certification results in reduced emissions.