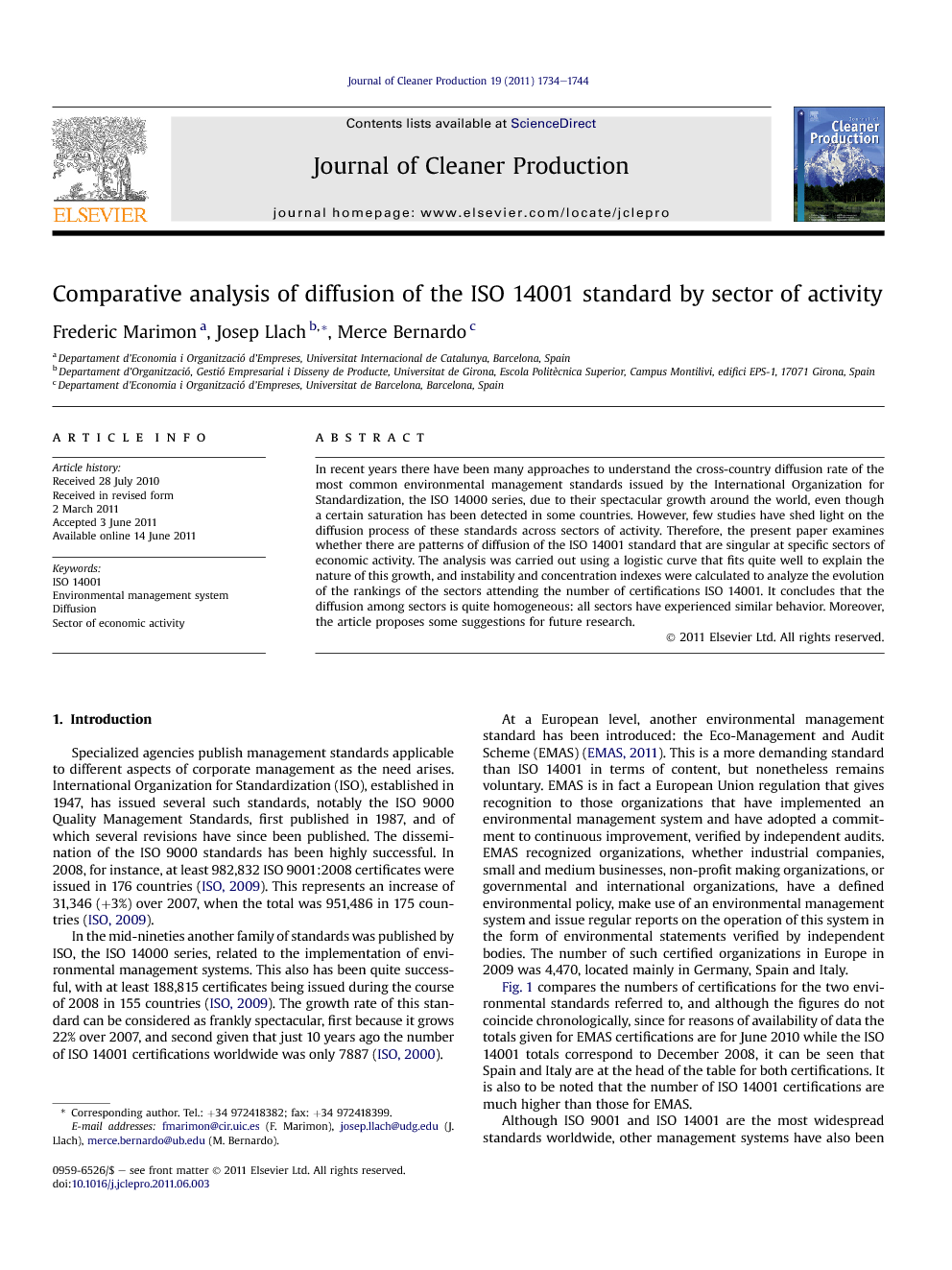 In recent years there have been many approaches to understand the cross-country diffusion rate of the most common environmental management standards issued by the International Organization for Standardization, the ISO 14000 series, due to their spectacular growth around the world, even though a certain saturation has been detected in some countries. However, few studies have shed light on the diffusion process of these standards across sectors of activity. Therefore, the present paper examines whether there are patterns of diffusion of the ISO 14001 standard that are singular at specific sectors of economic activity. The analysis was carried out using a logistic curve that fits quite well to explain the nature of this growth, and instability and concentration indexes were calculated to analyze the evolution of the rankings of the sectors attending the number of certifications ISO 14001. It concludes that the diffusion among sectors is quite homogeneous: all sectors have experienced similar behavior. Moreover, the article proposes some suggestions for future research.

Specialized agencies publish management standards applicable to different aspects of corporate management as the need arises. International Organization for Standardization (ISO), established in 1947, has issued several such standards, notably the ISO 9000 Quality Management Standards, first published in 1987, and of which several revisions have since been published. The dissemination of the ISO 9000 standards has been highly successful. In 2008, for instance, at least 982,832 ISO 9001:2008 certificates were issued in 176 countries (ISO, 2009). This represents an increase of 31,346 (+3%) over 2007, when the total was 951,486 in 175 countries (ISO, 2009). In the mid-nineties another family of standards was published by ISO, the ISO 14000 series, related to the implementation of environmental management systems. This also has been quite successful, with at least 188,815 certificates being issued during the course of 2008 in 155 countries (ISO, 2009). The growth rate of this standard can be considered as frankly spectacular, first because it grows 22% over 2007, and second given that just 10 years ago the number of ISO 14001 certifications worldwide was only 7887 (ISO, 2000). At a European level, another environmental management standard has been introduced: the Eco-Management and Audit Scheme (EMAS) (EMAS, 2011). This is a more demanding standard than ISO 14001 in terms of content, but nonetheless remains voluntary. EMAS is in fact a European Union regulation that gives recognition to those organizations that have implemented an environmental management system and have adopted a commitment to continuous improvement, verified by independent audits. EMAS recognized organizations, whether industrial companies, small and medium businesses, non-profit making organizations, or governmental and international organizations, have a defined environmental policy, make use of an environmental management system and issue regular reports on the operation of this system in the form of environmental statements verified by independent bodies. The number of such certified organizations in Europe in 2009 was 4,470, located mainly in Germany, Spain and Italy. Fig. 1 compares the numbers of certifications for the two environmental standards referred to, and although the figures do not coincide chronologically, since for reasons of availability of data the totals given for EMAS certifications are for June 2010 while the ISO 14001 totals correspond to December 2008, it can be seen that Spain and Italy are at the head of the table for both certifications. It is also to be noted that the number of ISO 14001 certifications are much higher than those for EMAS.Although ISO 9001 and ISO 14001 are the most widespread standards worldwide, other management systems have also been published and gained general acceptance, including OHSAS 18001 (BSI, 2007) in the field of health and safety management systems or the SA 8000 management system (SAI, 2008), the AA1000 Series (AccountAbility, 1995) and the Global Reporting Initiative (Global Reporting Initiative, 1997) for corporate social responsibility, among others. The benefits and the drawbacks of ISO 9001 and ISO 14001 have been the subject of analysis and discussion from both an academic and an organizational standpoint (e.g., Gimenez et al., 2006, Davies and Webber, 1998, del Brio et al., 2001, Gonzalez-Benito and Gonzalez-Benito, 2005 and Gonzalez-Benito and Gonzalez-Benito, 2008). The diffusion of both standards has also been studied in-depth and comparative analyses have been undertaken of their patterns of diffusion. In most cases, the analyses have been cross-national (e.g., Franceschini et al., 2004, Marimon et al., 2006, Marimon et al., 2009, Marimon et al., 2010 and Casadesús et al., 2008). This approach makes it possible to analyze why the rate of diffusion is different in different geographical areas. National governments have in fact adopted differing approaches to the promotion of quality standards within their countries’ organizations, or to the latter’s relationships with the environment. But there is a lack of studies analyzing the diffusion of these standards by sectors of activity. As far as the authors know, the only similar study that analyzes the rate of diffusion of one quality standard according to sector of activity is the recently published analysis by Llach et al. (2010). The purpose of the study referred to is to analyze the evolution of the worldwide diffusion of the ISO 9000 family of quality standards in terms of the different sectors of industrial activity. In view of the lack of studies analyzing the other most widespread worldwide standard, ISO 14001, the aim of the present study is to determine whether there are patterns of diffusion of the ISO 14001 standard that are specific to each sector of economic activity, given that each sector has its own norms of behavior. In order to achieve this aim, the paper has been structured as follows. Next section consists of a literature review. In the third section, the methodology is defined. Results are presented in the fourth section and conclusions are detailed in the last section. Moreover, some recommendations are suggested to shed some light on the ongoing debate about the greening industry.