عنوان انگلیسی
The use of indicators and the role of environmental management systems for environmental performances improvement: a survey on ISO 14001 certified companies in the automotive sector
دانلود فوری مقاله + سفارش ترجمه 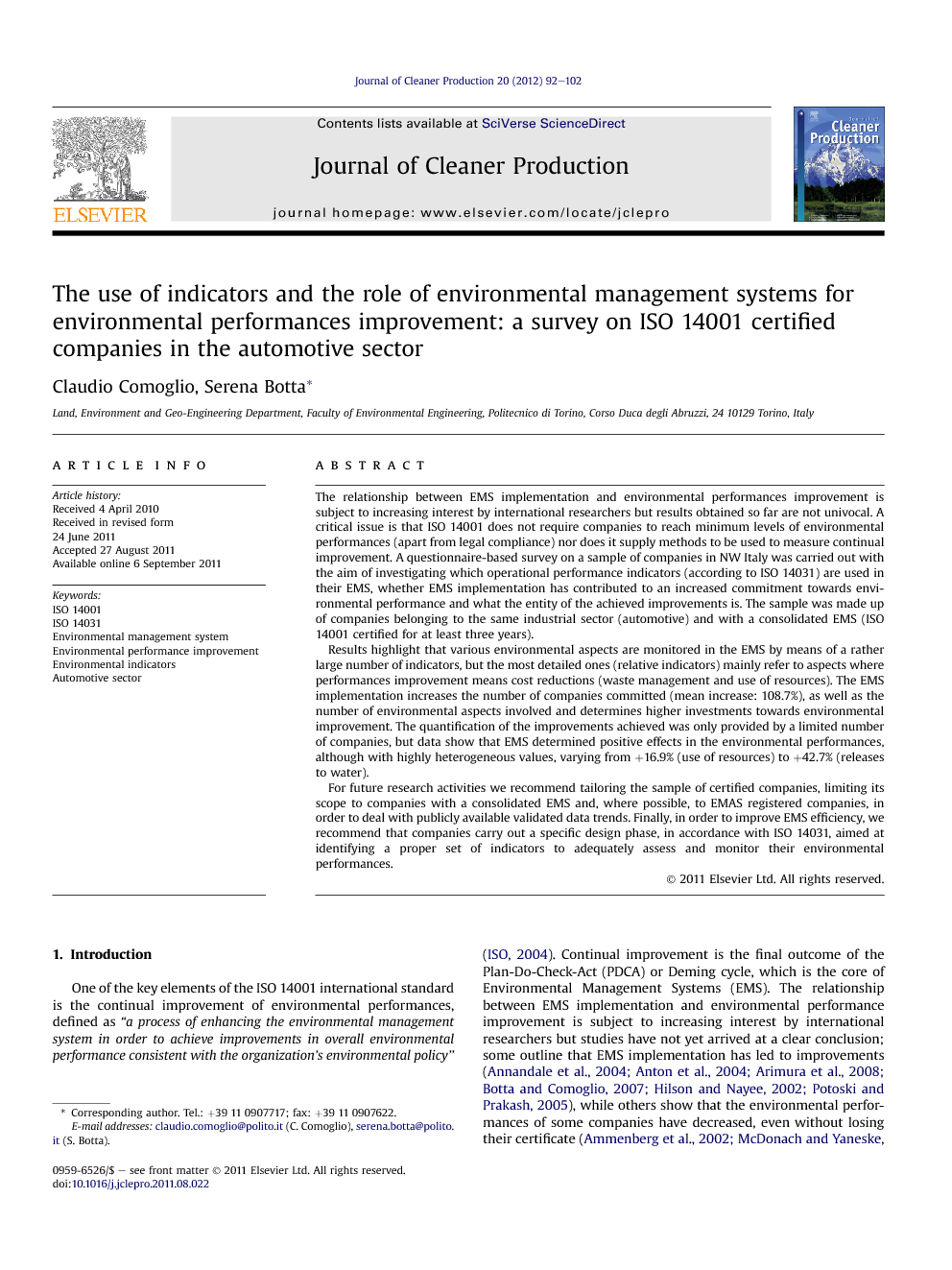 The relationship between EMS implementation and environmental performances improvement is subject to increasing interest by international researchers but results obtained so far are not univocal. A critical issue is that ISO 14001 does not require companies to reach minimum levels of environmental performances (apart from legal compliance) nor does it supply methods to be used to measure continual improvement. A questionnaire-based survey on a sample of companies in NW Italy was carried out with the aim of investigating which operational performance indicators (according to ISO 14031) are used in their EMS, whether EMS implementation has contributed to an increased commitment towards environmental performance and what the entity of the achieved improvements is. The sample was made up of companies belonging to the same industrial sector (automotive) and with a consolidated EMS (ISO 14001 certified for at least three years). Results highlight that various environmental aspects are monitored in the EMS by means of a rather large number of indicators, but the most detailed ones (relative indicators) mainly refer to aspects where performances improvement means cost reductions (waste management and use of resources). The EMS implementation increases the number of companies committed (mean increase: 108.7%), as well as the number of environmental aspects involved and determines higher investments towards environmental improvement. The quantification of the improvements achieved was only provided by a limited number of companies, but data show that EMS determined positive effects in the environmental performances, although with highly heterogeneous values, varying from +16.9% (use of resources) to +42.7% (releases to water). For future research activities we recommend tailoring the sample of certified companies, limiting its scope to companies with a consolidated EMS and, where possible, to EMAS registered companies, in order to deal with publicly available validated data trends. Finally, in order to improve EMS efficiency, we recommend that companies carry out a specific design phase, in accordance with ISO 14031, aimed at identifying a proper set of indicators to adequately assess and monitor their environmental performances.

The study was carried out through a questionnaire-based survey on a sample of 45 ISO 14001 certified companies belonging to the automotive sector (first-tier suppliers) in the Turin area (NW Italy). The results provided an overview of the environmental aspects monitored, the operational performance indicators used in the EMS, to which aspects companies have a commitment for improvement and the role of EMS on the commitment itself. The choice of limiting the sample to companies of the same sector and with an EMS certified for at least three years allowed us to deal with consistent data coming from consolidated management systems. This setup also prevented an overestimation of the improvements related to the initial implementation phase and guaranteed a relatively high response rate (66.2%). This approach can therefore be suggested for future research activities, in order to tailor the selection of the sample of certified companies. According to the survey results, a first interesting outcome is that several environmental aspects are monitored in the EMS by means of a large number of indicators. The analysis of the questionnaires provided a comprehensive list of indicators used by the sampled companies which can constitute a reference set for implementation in EMS by other organizations, even belonging to different sectors. Most of the ISO 14001 certified companies (more than 88% of the sample) in the automotive sector monitor the environmental aspects emissions to air, waste management, use of resources and noise. All the indicators used can be classified, according to the ISO 14031, as operational performance indicators (OPI). Within OPI, direct indicators (DI) represent the most commonly used typology (74.4%), often related to parameters used by companies to check compliance with legal requirements (e.g. pollutants concentrations). On the other hand, a rather large variety of relative indicators (RI), not linked to legal compliance, was also reported for two aspects, waste management and use of natural resources. We assume that the closer and more pro-active examination on these two environmental issues can be due to an higher interest on aspects which represent a significant cost for companies, but this hypothesis will have to be further investigated. As a general comment, the limited use of RI seems to reveal that the analysis of environmental performances does not present the same level of detail for all the aspects. Consequently the questions that arise are: how accurate is the definition of appropriate indicators for each environmental aspect and how detailed is the evaluation of those whose improvement is not related to cost reduction or to compliance to legal requirements? This could be considered a specific point for further research in order to discuss the problematic elements of ISO 14001 implementation that have been highlighted also by previous studies. Therefore, a general recommendation to improve EMS efficiency could be to try to integrate in it the approach of ISO 14031, through the introduction in the implementation of the EMS of a specific design phase aimed at identifying adequate environmental performance indicators. This phase has to be integrated in the initial environmental review required by ISO 14001 for new certification processes or during the management review for EMS already in place. From this point of view, an interesting step forward has recently been made by EMAS regulation: in the Annex IV of its new version (European Parliament and Council, 2009) registered organisations are now required to monitor and report to the public a fixed set of core indicators related to their direct environmental aspects and other relevant environmental performance indicators that will be defined by the Commission in specific sectoral reference documents. Through the survey we also tried to evaluate the influence of EMS implementation on increasing the commitment of companies towards environmental performances improvement, separating the investments made as a response to external/internal requests from those related to a voluntary commitment. The obtained results suggest that EMS gives a relevant contribution in increasing the number of companies committed and the number of environmental aspects involved. Therefore, EMS seems to represent a driver to widen the extent of companies commitment towards environmental performances improvement. This outcome will need to be further investigated but can already contribute, through the quantified information provided in this paper, to the ongoing scientific discussion on the usefulness of EMS implementation. With regards to the quantification of the environmental improvements achieved over the last three years, the response to the questionnaire was not completely satisfactory, as the data were only provided by a limited number of companies. However the improvement data provided seems to be consistent since the most significant response (one third of the sample) was related to the four most frequently monitored environmental aspects and about half of the sample (45.5%) presented a clear and direct relationship between resources devoted to improvement and improvement achieved. As a general result EMS determined an improvement in the environmental performances, thus the mean percentages reported were highly heterogeneous, varying from 16.9% (use of resources) to 42.7% (releases to water). The limited percentage of respondents was probably due to the limitations of the methodology used (questionnaire-based survey). The required information have in fact to be based on a specific review and overall assessment of the results obtained over the last three years for each environmental aspect and, very likely, several companies did not have already organized and elaborated available data and consequently decided not to carry out a specific evaluation just to fill in the questionnaire (which was left blank). This problem could be avoided in future studies using the same methodology by limiting the sample to EMAS registered companies. They are in fact required to publish, on a yearly basis, a validated environmental statement containing a summary of the available data on their performance, in terms of environmental objectives and significant environmental impacts. On the other hand, in this way, the identification of a significant sample will be more difficult as EMAS is adopted by a much lower number of companies than ISO 14001.