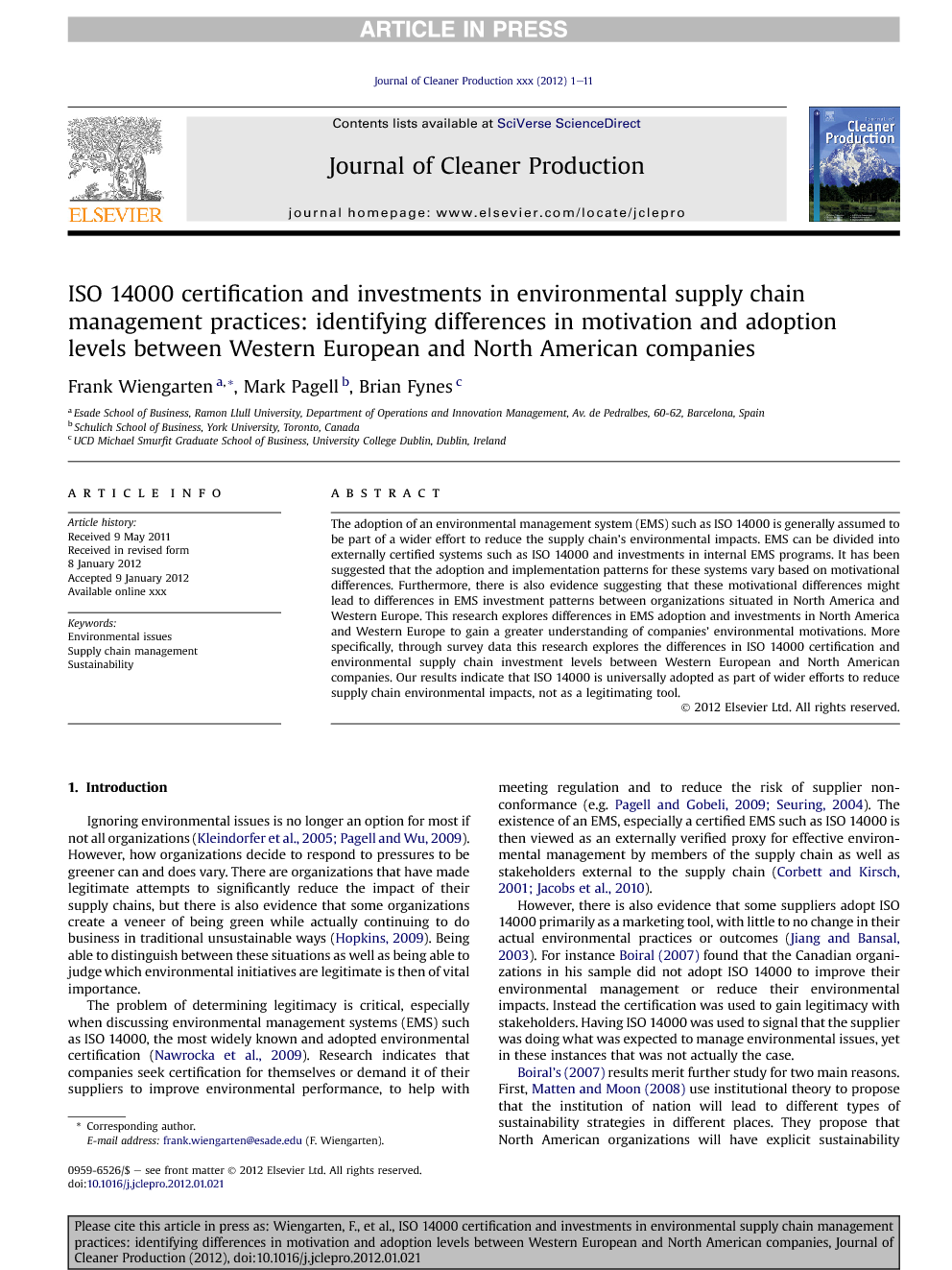 The results shed critical insight into the adoption of ISO 14000. In this sample the adoption of ISO 14000 is linked to increased environmental investments regardless of facility location. We find no evidence to support the contention that in certain regions ISO is mainly a legitimating tool. Our results show that when buyers chose a supplier partially because of ISO 14000 certification that they should expect the supplier to be making honest and significant efforts to improve the environmental performance of their operations. This does not mean that there are no organizations which are certified but not investing in improving their operation’s environmental performance, but it does indicate that worries that ISO 14000 is being miss-used in general are unfounded; decision makers can view ISO 14000 as an indicator of a functioning EMS. This research has important implications for managers and researchers. From a managerial perspective the critical implication of the results is that ISO 14000, in general, is a valuable certification. Buying firms can assume that suppliers with such certifications will indeed (again on average) be actively working to control and reduce their environmental impacts. And for firms considering certification that have hesitated because they were uncertain of the actual value, our results show that getting certified will indeed be more than a legitimating exercise. Equally important region, at least when comparing North America to Europe does not influence the results, implying that ISO 14000 certifications from Europe are equal to those from North America in terms of indicating a functioning EMS. In addition to the practical implications of our results, this research also points to the need for significant further study. The results of this study show that the institution of country or region is not influencing the motivation for adopting ISO 14000; in both regions adoption of ISO 14000 leads to a complete EMS orientation. In a sense then these results would imply that if there are institutional effects in general when it comes to responsibility strategies, that the institution of ISO 14000 is a stronger driver than locale. Much like ISO 9000 helped to drive the quality revolution a critical implication of our research is that ISO 14000 may drive facilities to become more environmentally sustainable. Future research needs to address this by examining more encompassing indicators of EMS orientation than ISO 14000, as well as expanding to a more comprehensive definition of responsibility that includes both environmental and social concerns. Additionally, while environmental initiatives and certifications such as ISO 14000 are well researched, the social aspects of sustainability are not well understood (Seuring and Mueller, 2008). Social initiatives and certifications such as OHSAS 18001 might have a significant impact on the way supply chains are managed but their interplay with other certifications such as ISO 14000 and ISO 9000 has not been explored. This implies that future research needs to expand beyond an EMS orientation to a sustainability orientation to truly understand the motivations and outcomes of adopting a responsibility strategy (Chen et al., 2009). Future research will also have to address some of the limitations of this study. For example, while the sample does include all of the major North American economies, it does not provide coverage of all of Western Europe. For instance, both France and Spain are not included in the sample. Moreover, taking into account the current and forecasted development of the world economy it would also be of importance to explore the interplay between ISO 14000 and other ESCM practices in an Asian setting. In addition, the GMRG data collection effort is cross sectional in nature. It is entirely possible that ISO 14000 (and by extension ISO 9000) are the result of, rather than the driver of, other investments in ESCM. If this is the case we would except to see significant differences among organizations that adopted ISO 14000 as a way to help solidify existing investments in ESCM as compared to organizations that were either pushed into ISO 14000 by customers and or for legitimacy reasons alone. A further limitation of the research is that our ISO indicators measure the extent to which the plant has invested resources into obtaining certification. Measures of this nature have precedent in the literature (Melnyk, et al., 2003) but are not nearly as common asking if the plant has obtained certification, which makes linking our results directly to some previous studies more difficult. However, to better test a theory and truly understand phenomena scientists need to measure the constructs of interest in multiple ways to show that the results are not just due to measurement choices (Kerlinger, 1986 and Pagell and Krause, 2004). The inability to make easy comparisons to other studies is then of course a limitation, but that is mitigated by the stronger theoretical foundation we are helping to build by addressing ISO in multiple ways. Furthermore, the data is unlikely to be a truly random sample of the population of manufacturing firms in the countries studied so future research will be well served by better sampling. Additionally, the majority of the companies in our sample is small or medium sized. This begs the questions as to whether or not our results can be generalized to larger plants. Future research may emphasize on exploring the role of size on differences in adoption levels and motivation for ISO 14000 and ESCM practices. Despite these limitations, this paper makes a significant contribution by exploring how and why Western European and North American organizations use EMS in general and ISO 14000 specifically.