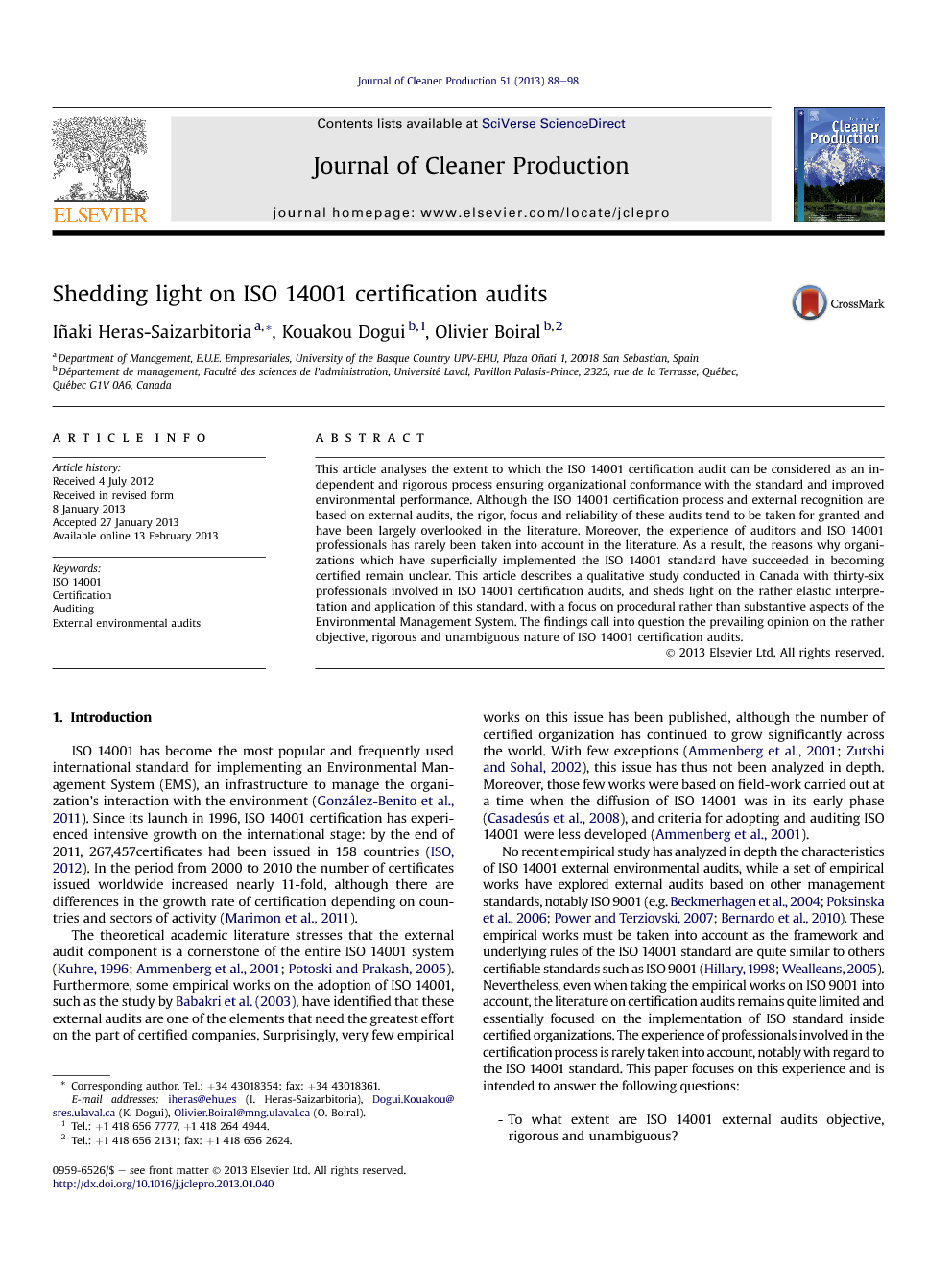 This article analyses the extent to which the ISO 14001 certification audit can be considered as an independent and rigorous process ensuring organizational conformance with the standard and improved environmental performance. Although the ISO 14001 certification process and external recognition are based on external audits, the rigor, focus and reliability of these audits tend to be taken for granted and have been largely overlooked in the literature. Moreover, the experience of auditors and ISO 14001 professionals has rarely been taken into account in the literature. As a result, the reasons why organizations which have superficially implemented the ISO 14001 standard have succeeded in becoming certified remain unclear. This article describes a qualitative study conducted in Canada with thirty-six professionals involved in ISO 14001 certification audits, and sheds light on the rather elastic interpretation and application of this standard, with a focus on procedural rather than substantive aspects of the Environmental Management System. The findings call into question the prevailing opinion on the rather objective, rigorous and unambiguous nature of ISO 14001 certification audits.

ISO 14001 has become the most popular and frequently used international standard for implementing an Environmental Management System (EMS), an infrastructure to manage the organization's interaction with the environment (González-Benito et al., 2011). Since its launch in 1996, ISO 14001 certification has experienced intensive growth on the international stage: by the end of 2011, 267,457certificates had been issued in 158 countries (ISO, 2012). In the period from 2000 to 2010 the number of certificates issued worldwide increased nearly 11-fold, although there are differences in the growth rate of certification depending on countries and sectors of activity (Marimon et al., 2011). The theoretical academic literature stresses that the external audit component is a cornerstone of the entire ISO 14001 system (Kuhre, 1996; Ammenberg et al., 2001; Potoski and Prakash, 2005). Furthermore, some empirical works on the adoption of ISO 14001, such as the study by Babakri et al. (2003), have identified that these external audits are one of the elements that need the greatest effort on the part of certified companies. Surprisingly, very few empirical works on this issue has been published, although the number of certified organization has continued to grow significantly across the world. With few exceptions (Ammenberg et al., 2001; Zutshi and Sohal, 2002), this issue has thus not been analyzed in depth. Moreover, those few works were based on field-work carried out at a time when the diffusion of ISO 14001 was in its early phase (Casadesús et al., 2008), and criteria for adopting and auditing ISO 14001 were less developed (Ammenberg et al., 2001). No recent empirical study has analyzed in depth the characteristics of ISO 14001 external environmental audits, while a set of empirical works have explored external audits based on other management standards, notably ISO 9001 (e.g. Beckmerhagen et al., 2004; Poksinska et al., 2006; Power and Terziovski, 2007; Bernardo et al., 2010). These empirical works must be taken into account as the framework and underlying rules of the ISO 14001 standard are quite similar to others certifiable standards such as ISO 9001 (Hillary, 1998; Wealleans, 2005). Nevertheless, even when taking the empirical works on ISO 9001 into account, the literature on certification audits remains quite limited and essentially focused on the implementation of ISO standard inside certified organizations. The experience of professionals involved in the certification process is rarely taken into account, notably with regard to the ISO 14001 standard. This paper focuses on this experience and is intended to answer the following questions: - To what extent are ISO 14001 external audits objective, rigorous and unambiguous? - To what extent are the external audits of ISO 14001 carried out from a consulting or a conformance perspective? - To what extent do ISO 14001 external audits focus on substantial improvements of environmental performance rather than EMS procedural aspects? The rest of the paper is organized as follows. The next section presents the main conceptual framework related to the external environmental audits. The main concepts, approaches and standards related to environmental audits are analyzed. The literature on ISO 9001 audits is also reviewed. The section on methods describes the approach applied for collecting and analyzing data. Finally, the main results of the field work are summarized. The final section presents the main contributions and implications of the article